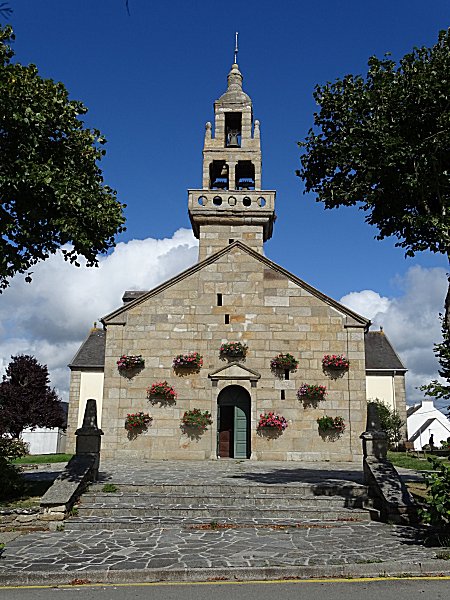 Access : Saint Gwenael church is located in the centre of Plougonvelin.
Park in the parking lot next door.

Included in an enclosure, the church is surrounded by a placister. It is a classic building which shape is a Latin cross. Burned down during the 1944 bombardments, the building was restored from 1948 to 1951. The bell tower has a corbelled gallery topped by two bell chambers. It ends in a dome with a lantern. 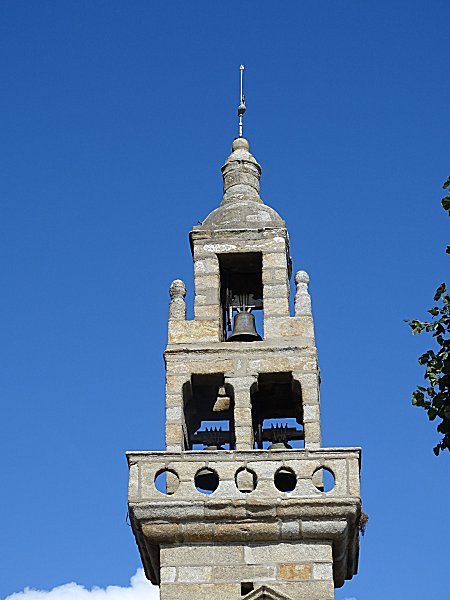 The main portal has no ornamentation. It gives access to the nave through a small porch. 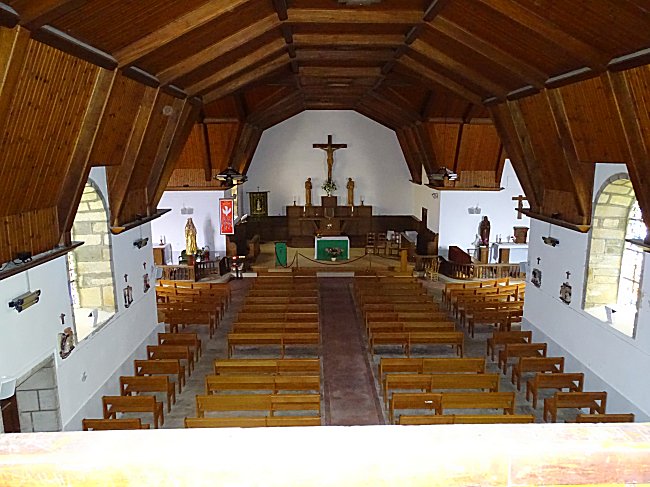 The panelled vault has five sections. The nave has no aisles. Two chapels adjoining the building form a small transept. 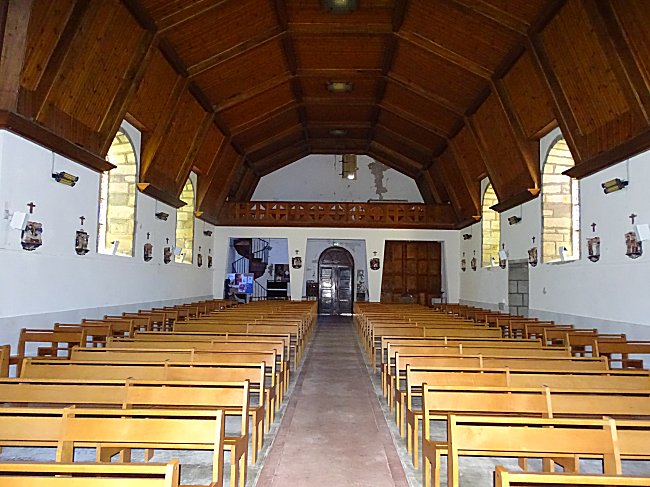 A large grandstand has been erected above the entrance. It is under this tribune that the baptismal font is located. 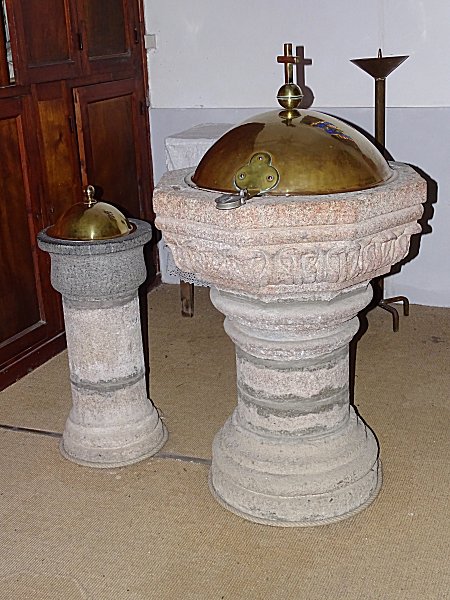 On the walls of the nave are the stations of a superb way of the cross in bright colours made of enamelled terracotta. 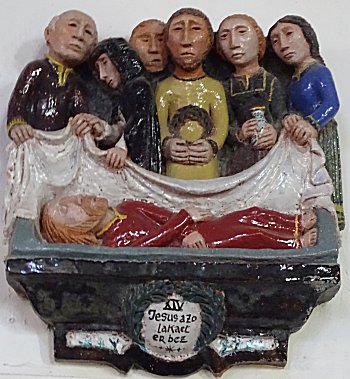 The body of Jesus is put to the grave

Very original, these stations are the work of the artist Pierre Toulhoat (1923-2014) of Quimper who also made the stained-glass windows. Another polychrome ceramic of the same artist will be discovered on the altar face. 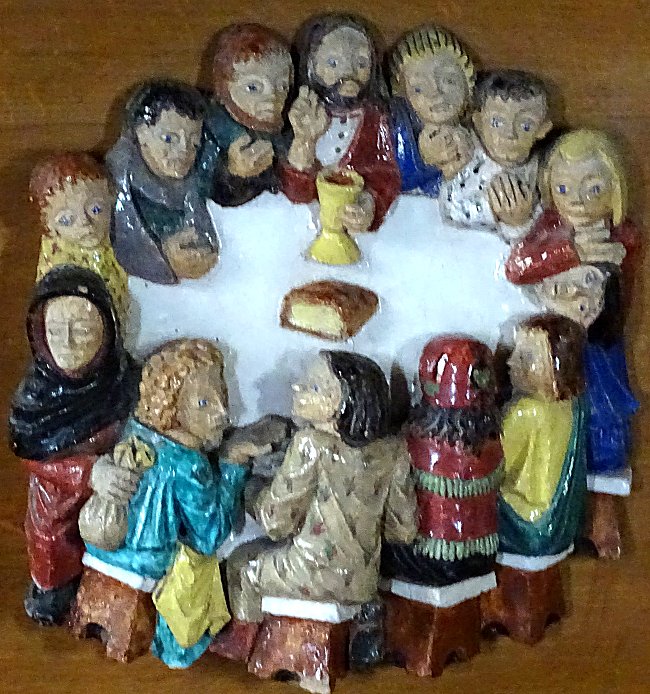 The stained-glass window dominating the baptismal font is unfortunately partly hidden by the tribune and by a projector. It represents Christ's baptism. 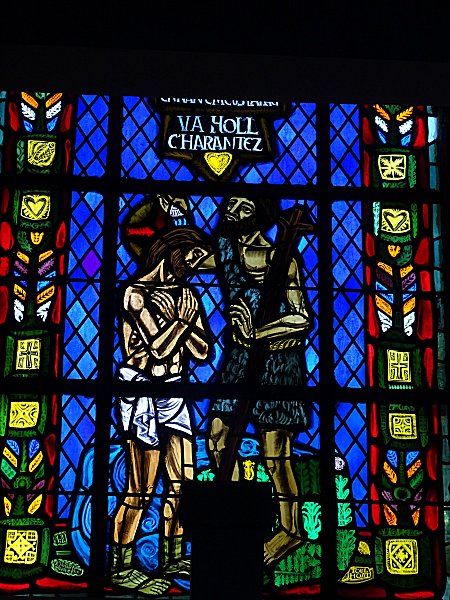 It is necessary to go up in the gallery to see fully the hidden part of this stained-glass window where figures a dove. 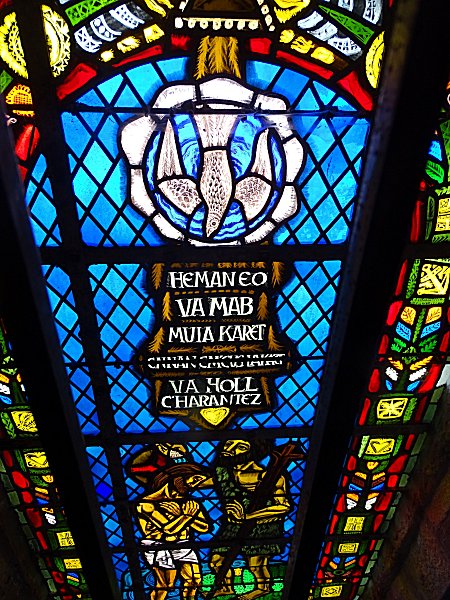 The stained-glass windows of the church were all made in Quimper by the workshops Le Bihan-Saluden between 1950 and 1967. The master glassmaker worked on Pierre Toulhoat's cardboards, which were very modern at the time. One will notice the signatures, always discreetly included in the decor.

The legends are mostly written in Breton. Words are not always separated by spaces and letters, as in the Middle Ages, can include thereself and even overlap each other. The artist has made it a sort of reading game.

The two stained-glass windows above the altar are dedicated to Saint Gwenael, the patron saint of the church. Very popular in Lower Brittany under different names like Guénaël, Guinal or Vendal, this saint would have lived in the VIth century. Born in Ergué-Gabéric, he would have met Saint Guénolé at the age of 11 in a street in Quimper and asked to follow him. Having become a monk, he would have founded the monastery of Caudan in Lanester then would have succeeded Saint Guénolé as abbot of Landévennec.

The transept windows illustrate the more recent venerations to the Rosary, the Sacred Heart and Saint Theresa. These cults having become universal, the artist no longer wrote the legends in Breton. 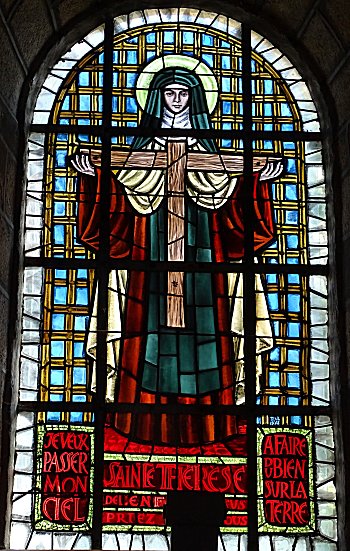 The rose of the left wing of the transept also deserves a glance. We discover, very stylized, the main events related to the birth of Christ. 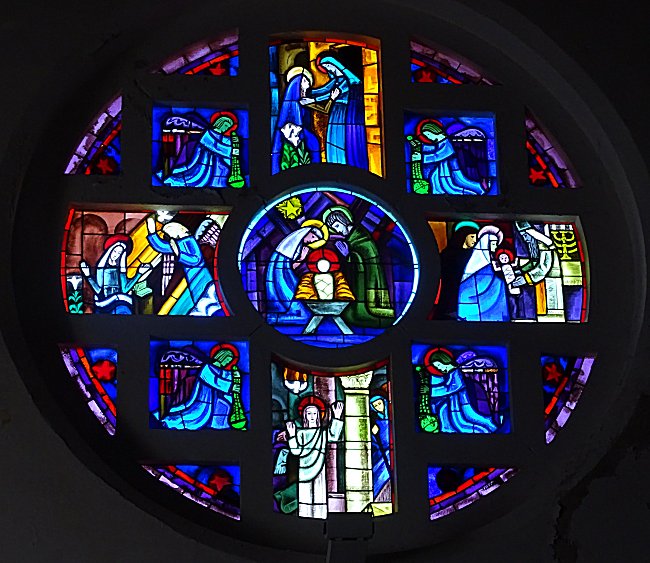 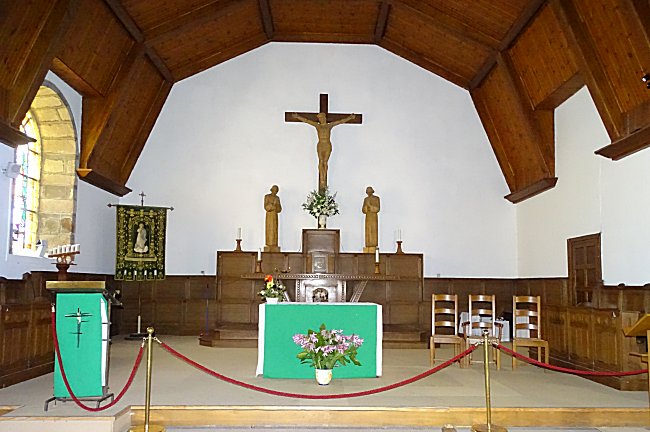 Behind the altar, the central crucifix is guarded by two angels in natural wood carved by the Breton artist Stanislas Godec (1927-1996).


In the left wing of the transept, a chapel is dedicated to the Virgin. 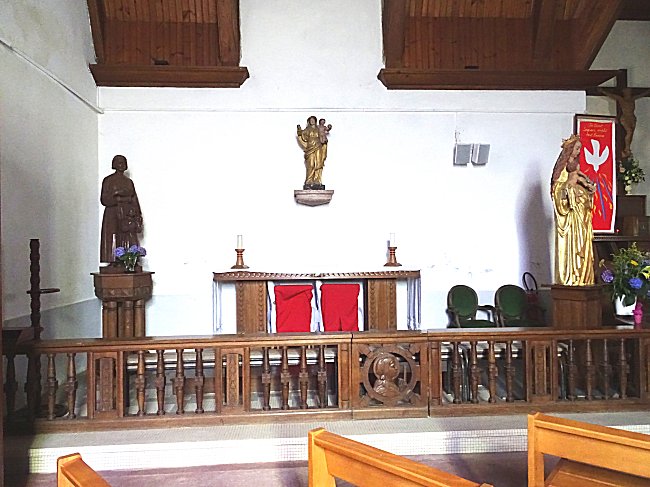 In the centre, an ancient gilded wooden statue depicts a veiled Virgin with her Child, whose right hand must have held an object. It is Our Lady of Clarity, a statue from the Chapel St. Jean. 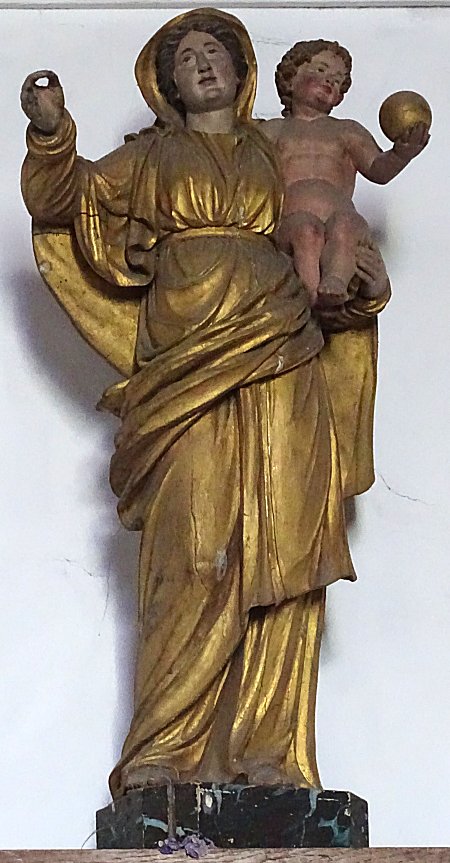 On the left, Saint Joseph and the Child Jesus have been placed and on the right a very beautiful Virgin and Child crowned with the end of the XVIth, named Itron Varia Pen-ar-bed, Lady Mary of the World's extremity. This restored statue comes from theNotre Dame de Grâce chapel at headland of St-Mathieu, formely known as Notre-Dame du Bout du Monde.

The chapel on the right wing contains, under the crucifix, a statue of the Sacred Heart and another of Saint Anne educating Mary. 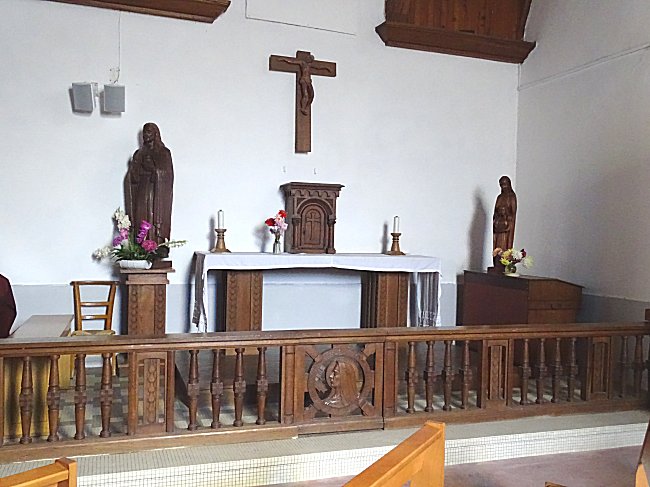 Outside, one can see on the placister a beautiful medieval stone cross as well as a large mission cross of the XIXth century which both look after the old cemetery surrounding the building.


See the section of this website: Dom Michel Chapel at Le Conquet 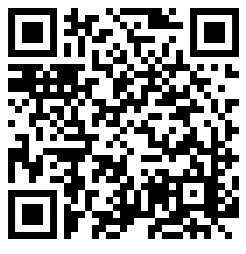