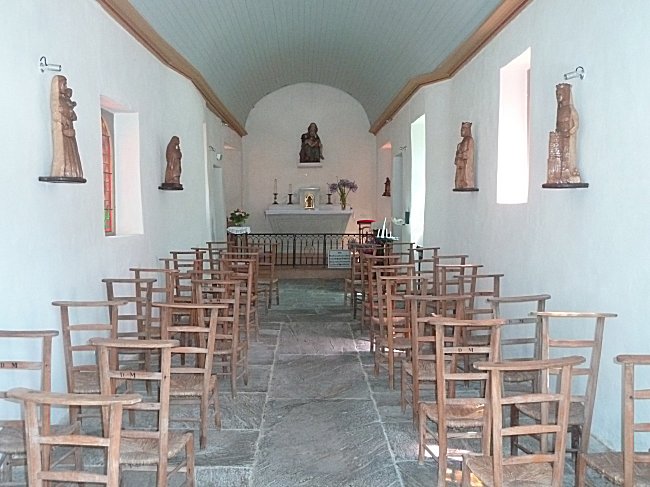 Access : Coming from St-Renan or Brest, go straight through the centre of Le Conquet as to join the pier and park at the car park located at the corner of Rue Ste-Barbe and Rue Dom Michel. From the car park you can see the chapel in Dom Michel street.

This building, recently restored, was during the last twelve years of his life the residence of Dom Michel Le Nobletz1. Born in Plouguerneau in 1577, this priest who lived through the religious wars in his youth died here in 1652 2.
After studying theology at the Sorbonne, Dom Michel set himself the objective of evangelizing the population of the Leon country in his own way. Working successively in Plouguerneau, Morlaix, Quimper, Sein, Molène, Ouessant and Batz, he stayed 25 years in Douarnenez before settling in Le Conquet. 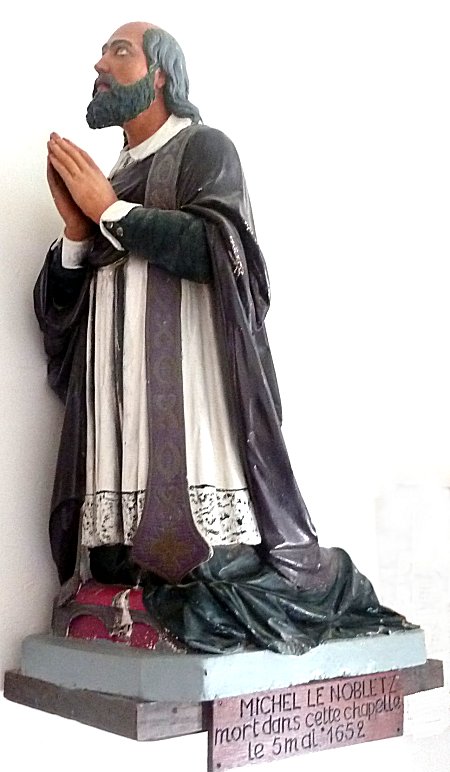 His ardour, his talents as an orator, his ardent desire for conviction and especially the method he used to catechise the people quickly made him known throughout Brittany. Faced with an often illiterate population, he had understood well before the twentieth century the power of persuasion of the images that he used as supports for his preaching. 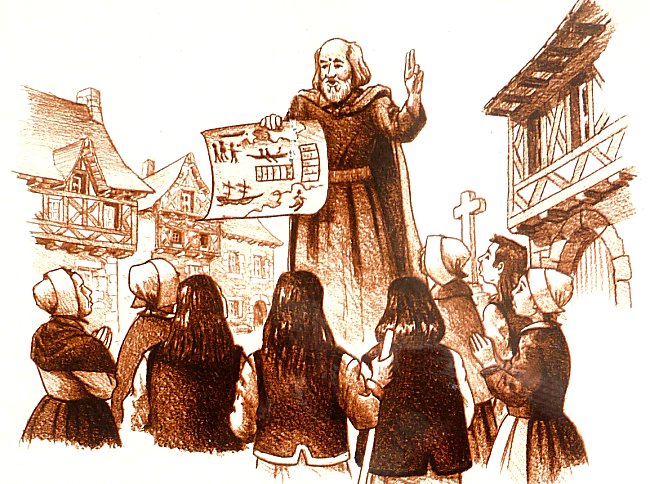 Reproductions of his "maps", the taolennoù as he called them in Breton, are exposed on the walls of the chapel. The originals, drawn on sheepskins, were easily transportable.

The Mirror of the World 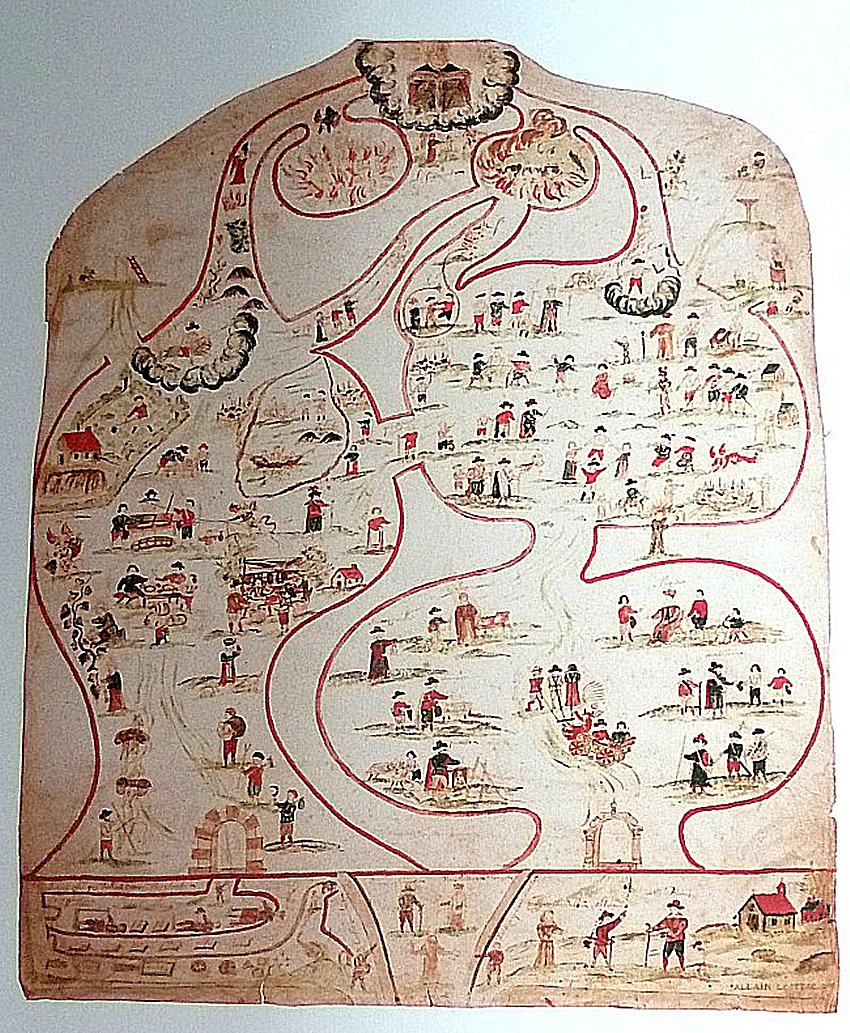 On this map, drawn by Allain Lestobec, registrar of the Conquet, the life of the population is represented from bottom to top: the rich on the right, the poor on the left. At the top, they all reach at the end of their lives, the hell, purgatory or paradise. However, there are bridges between the two groups. On the right is the newlywed couple whose carriage has the devil as its coachman, reflecting the moral dangers of marital life for the better-off. These drawings are valuable for the study of professions and costumes of the XVIIth century. Fourteen of these taolennoù, classified Historic Monuments, are preserved at the Bishopric of Quimper.

Always setting an example, uncompromising in his convictions, Dom Michel had become an ardent defender of the poor and fought wealth and luxury. In these times when the dignitaries of the Church were mainly from the nobility, it is easy to guess that his words which advocated asceticism, poverty and mercy did not please his hierarchy. It was not until 1888 that a beatification process opened in his favour, and 1913 that Pope Pius X recognized his virtues. 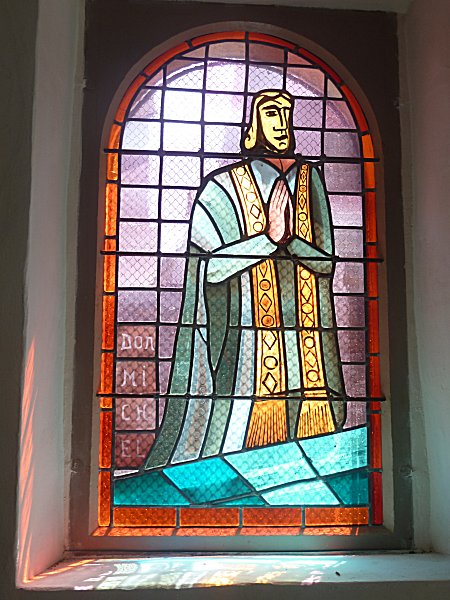 The chapel is as its boss: simple and sober. Its stained-glass windows and the small statues that decorate it are of recent manufacture.
A beautiful Pietà of the period XVIth-XVIIth centuries, in polychrome wood, with a pathetic expression, thrones above the altar. She's definitely the star of the chapel. Recently restored by a professional workshop and firmly sealed in the wall, this unique work has been listed on the Inventory of Historic Monuments since December 24, 1990. 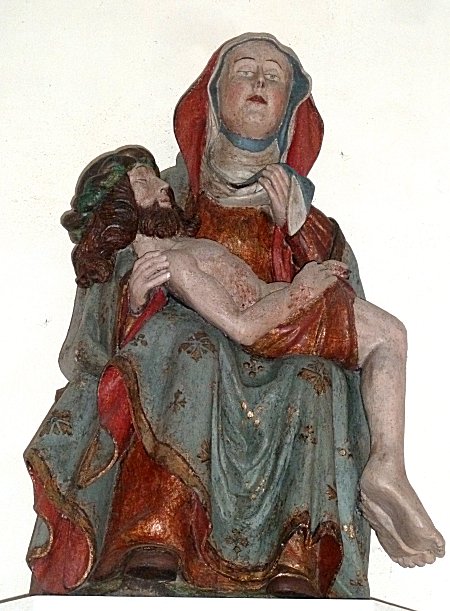 The Dom Michel Chapel is also known as "Notre-Dame de Bon Secours". And it is for this reason that at the end of the XIXth century one could go there to pray to the Blessed Virgin. An ex-voto was deposited there following a shipwreck as evidenced by a planchette ( see below ).

(vow made to the Blessed Virgin at 8 o'clock in the evening in the bay of Blancs Sablons
by the captain LEMARCHAND and his crew.
The ship was thrown to the coast about 10 o'clock. Crew saved. 1873 2 Feb. © Photo JPC

A very strong storm forced several ships to take refuge in the Bay of Blancs Sablons on February 2, 1873, six of them had been thrown on the rocks where they had been crushed. They were three schooners, a brig, a tidal chaser and the boat of a certain Captain Lemarchand. The latter, following a vow made to the Virgin, had to come here to deposit an ex-voto ( the model of his ship?) with this explanatory plate. The name and type of his vessel are unknown because, unlike the other five, they do not appear on the disarmament roll.


As for the restoration of the building, it dates from 2013 and was made possible by the signing of an agreement between the Fondation du Patrimoine, the commune of Le Conquet and the association "Mignoned Dom Mikël Konk Leon" ("Friends of Dom Michel du Conquet") which started a fund among the population.
An act of heritage solidarity that we would like to see imitated more generally when other types of buildings also deserve to be saved.

-2- On the transformation of the house where Dom Michel lived into a chapel, see Jean-Pierre Clochon's blog : 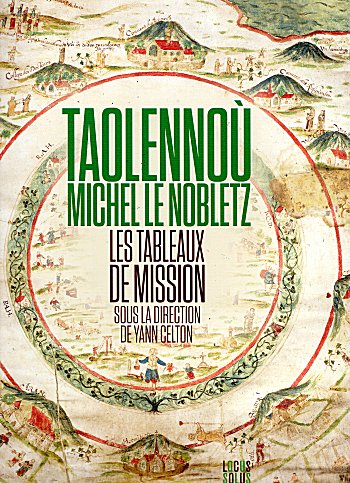 A magnificent work in 24x32 format where one will find the reproductions of the 14 maps on parchment preserved at the bishopric of Quimper.

Animations are planned every year in the chapel: exhibitions, concerts and songs. See on the heading of this page: Animations and festivals . 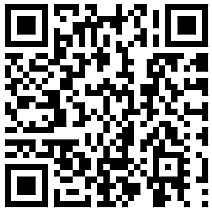