Access : From Saint-Renan, take the exit towards Ploudalmézeau (D68) and follow this road straight on towards the sea. At the end of the road, turn right towards Landunvez. The sundial is fixed on a house along the road, on the left side, at number 11 of this street of Colonel Fonferrier. Park a little further to the right and walk back to examine it with binoculars. 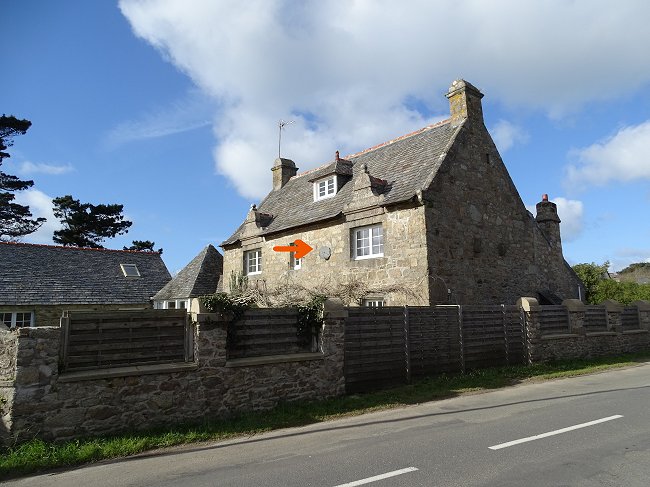 The observation of this ancient dial is difficult because of the traffic. If you can't get close, you have to use binoculars. 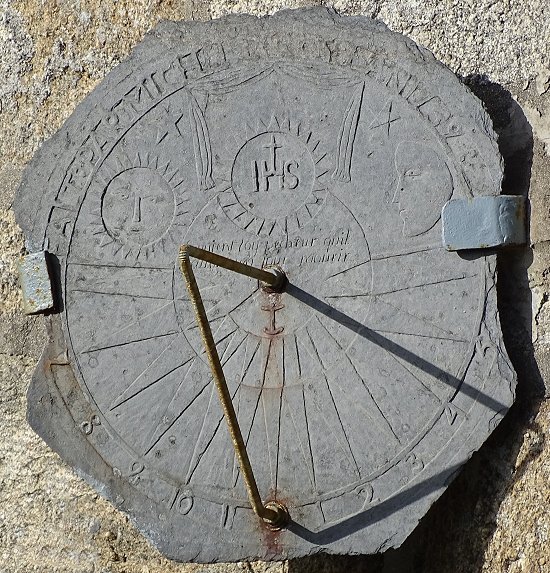 At first glance, nothing shocks you about this dial?


You need to be familiar with sundials to answer this question.
Let's carefully observe its curved metallic style and compare it to the dials of Lanrivoaré and Milizac :

Probably when the dial was acquired, around 1960, its style was again sealed into the wall... but it was placed upside down !

Indeed, the metal part that starts from the center must not be perpendicular to the dial but parallel to the axis of rotation of the Earth in order to take into account its inclination on the ecliptic plane. And it's the shadow of this part that gives the solar time. The part perpendicular to the dial is only a tutor that prevents the style from deforming by offering it a second point of support. So that its presence does not interfere with the reading of the time, this part is fixed at the very bottom of the dial, at noon.

Under these conditions, the Argenton dial can no longer give the solar time, it is only decorative. But that's what it was bought for.

Where did it come from?

It used to be fixed above the door of No. 3, Streat ar Feunteun. A house much newer than the dial. It is therefore either from the house that preceded the current construction or from the mansion at the end of the Streat ar Feunteun. However it is interesting to examine it because it is old.

It is a vertical declining dial1 engraved on a roughly rounded slate schist plate. The hours are indicated by the ends of narrow triangular arrows. On the left the Arabic numerals go from 6 a.m. to noon, and from 1 to 5 p.m. on the right.

An inscription in the shape of an arc of a circle overhangs the engraved decoration.

It is difficult to read it because words are very eroded. It reads:


This Michel Kerros is not necessarily the manufacturer of the sundial. He may also be the sponsor of the work. And, according to the current owner, a Michel Kerros was precisely in 1739 the owner of the house at 3 Streat ar Feunteun.

The engraved ornamentation is rather sober. A radiant Chrism is shown under an open theatre curtain. It consists of the letters IHS surmounted by a cross. It was the Greek abbreviation for Jesus (IESus). 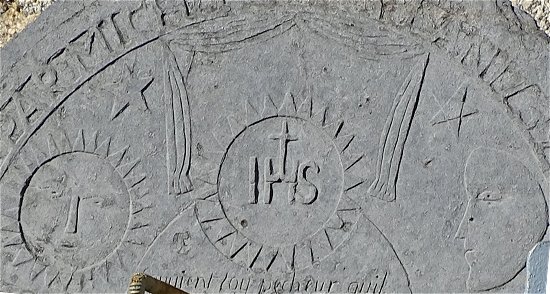 The curtain is framed by a star and two crossed spears.
Below, the human-faced Sun and Moon represent the flight of time.

The device is in French. This is not exceptional, but they are more frequent in Latin. It reads : Remember, sinner, that someday you'll have to die


The 18th century spelling is not the same as it is today, so we will not dwell on it. The word pecheur is of course to be taken in the sense of sinner. This device, like the Chrism, reminds the passer-by of the religious character of daily life at that time.

In short, an interesting dial. It's a pity, however, that it is no longer functional.

-1- A sundial is said to be of declining vertical type when it is fixed on a vertical plane that is not oriented exactly south-facing. It is said "for morning" or "for afternoon" when it is oriented a little towards the east or on the contrary towards the west. If it faces exactly towards a cardinal point, it is called a vertical south, west, north or east facing dial.
Since the original orientation of the Argenton dial cannot be precisely known, it cannot be described with this precision.

Thanks to Benoît Ménez for his historical clarifications. 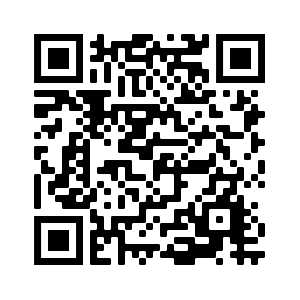