The Cemetery of the Saints: Gueret ar Sent 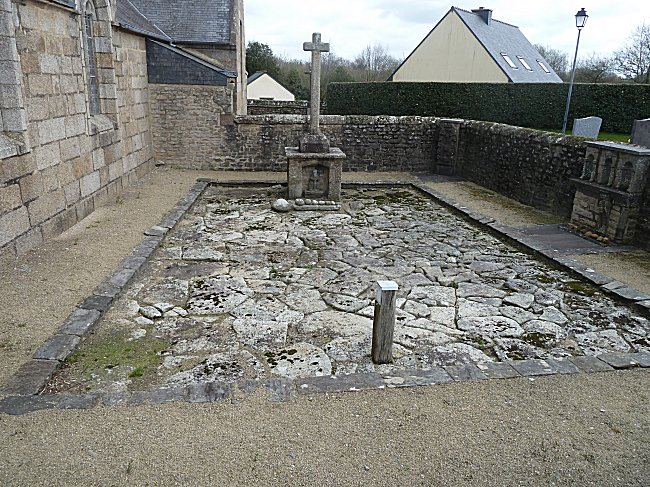 Access : The Cemetery of Saints is located near the church of Lanrivoaré. It can be reached through the communal cemetery from the large car park.

The Cimetière of Saints is an enclosure covered with large stone slabs. At its end rises a cross and in its base has been made a cavity containing a statue of Saint Hervé. 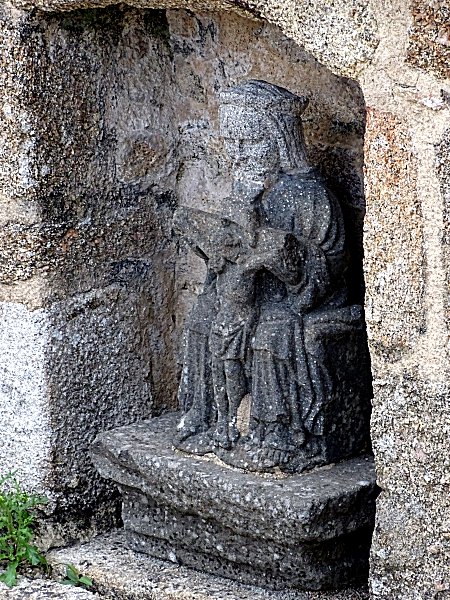 In front, are aligned 7 stones, one of them being clearly more important than the others.
On the right side is the same alignment of stones in front of a small sculpted altar. 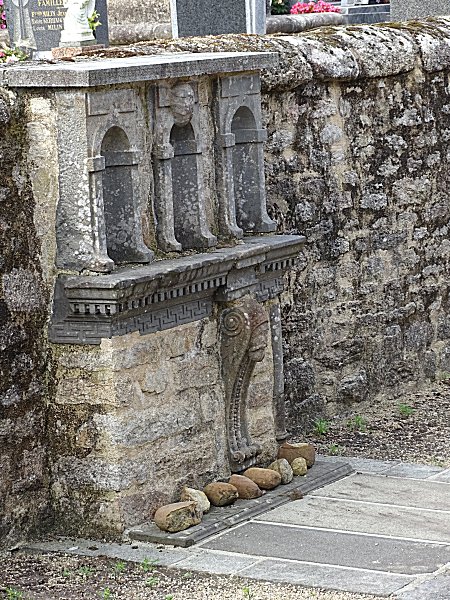 This altar is not only interesting for the sculptures it presents. It shows a very original blazon engraved in relief on a stone of oval shape. Heraldist Michel Mauguin studied this coat of arms and restored its original colours. 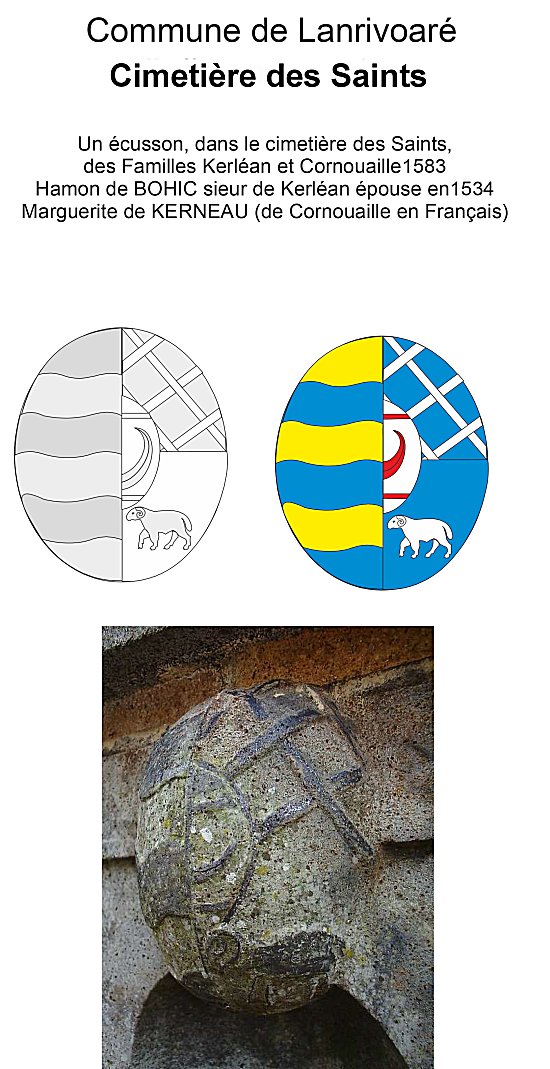 This small monument dates from the XVIth century. And it's sculptures always intrigue visitors.

An enamelled lava panel was placed nearby to explain the meaning of the whole complex. 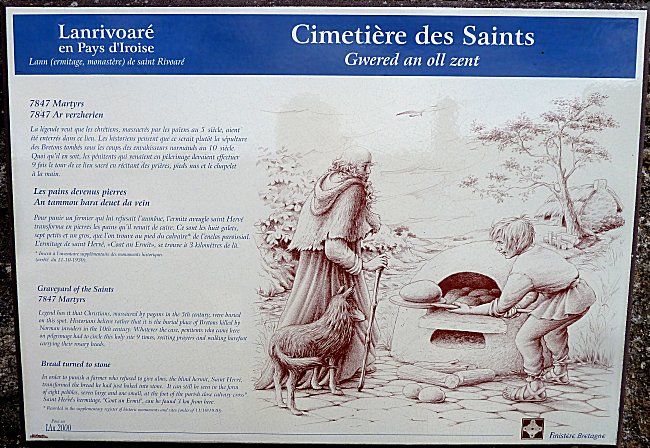 The illustration shows Saint Hervé, accompanied by his wolf, in front of a bread oven in which the baking has just ended.

In fact, the Cemetery of the Saints materializes two distinct legends:

In this place, it is said that 7777 christians were massacred by pagans at the beginning of the Christian era and were buried here.
No text reports such a massacre and the size of the enclosure could not allow such a large number of burials either. Historians lean to another explanation.
Everyone knows that after the partage of Charlemagne's empire, in the IXth and Xth centuries, the Vikings have carried out many devastating raids in Brittany. It is quite possible that the population of the parish, close to the coast, was massacred while wanting to defend its goods and its life.
But 7777 inhabitants at that time, it is undoubtedly very exaggerated. Legends often magnify facts. And the number itself results from an approximate, but voluntary, translation from Breton.
In Breton, we say seizh mil ( seven thousand ) seizh kant ( seven hundred ) ha seizh-ugent seizh ( and seven times twenty, more seven ). If we count correctly, that makes 7700+140+7 = 7847 martyrs. That's what it's said on the sign. But regardless of the exact number, it is clear that the redundancy of the number 7 is voluntary. This, and not the quantity, is what the French translation of the 7777 martyrs respects. This sacred figure appears in several texts in The Apocalypseaccording to St John. This one-number's redundancy is also found in the 6666 warriors who, it is said, had made up a Roman legion.

Still seven1. Another legend has it that once, Saint Hervé, the blind hermit of Lanrivoaré, always accompanied by his wolf, asked for alms a farmer who was cooking his bread. ( visit of the hermitage ). The latter refused it to him. To punish him, the hermit turned the bread into stones.
It is this miracle that is evoked by the 7 stones aligned in front of the cross.

At the time of the "pardon", it was customary to kneel around this enclosure.
Today, if one wishes to meditate and pray before the little statue of Saint Hervé, it is recommended first of all to take off one's shoes and, bareheaded, to go around the cross three times. It's said that women who want to have a child can have their wish realized.
Here, no one will be surprised to see you, going barefoot, to respect this rite.

-1- The number 7 is the basis of a very large number of elements linked to tradition, and this since Antiquity: the 7 days of the week, the 7 wonders of the world, the 7 deadly sins, the 7 sacraments etc... In Brittany, we must add the 7 saints of the Tro Breizh of yesteryear: St Patern, St Corentin, St Tugdual, St Samson, St Malo, St Brieuc and St Pol Aurélien.

Thanks to Michel MAUGUIN who carried out heraldic research on the surrounding lordships and kindly communicated them to us to put them below at the disposal of the Net surfers. 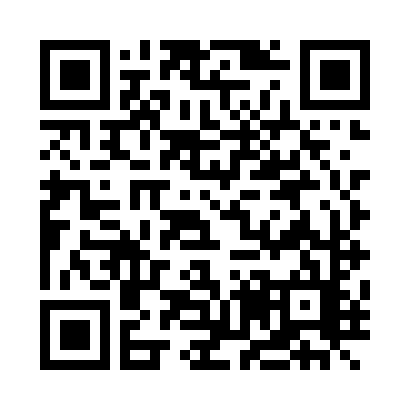 See also, next to this enclosure: