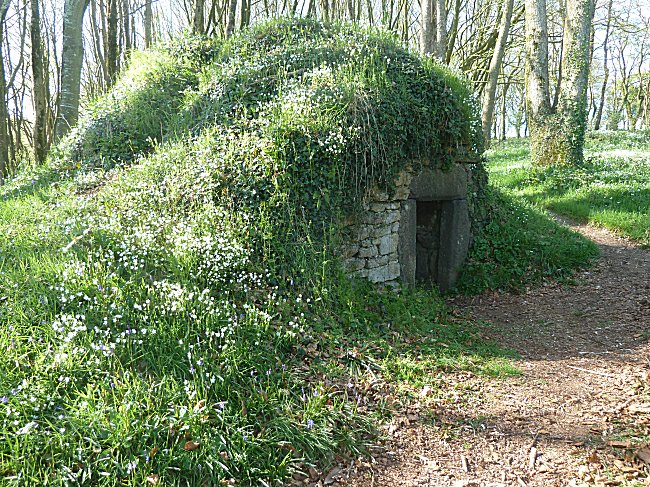 Continue on foot on the path for 400m until the Calvary. The hermitage is there, in the wood called "Coat an hermit", the wood of the hermit, on the right.

As often, everything begins with a legend : born around 520, and blind by birth, Saint Hervé was, it is said, the son of a bard at the court of one of Clovis' successors, King Childebert 1st. He would have been also the nephew of the Bourg-Blanc's hermit Saint Urfold or, according to other sources, of Saint Rivoaré, the patron saint of Lanrivoaré. Saint Hervé, like his uncle, would have lived in poverty and humility all his life. He would have retired several years here in the woods of Lanrivoaré. The dog guiding him having been devoured by a wolf, the hermit condemned the wild animal to take the role of his dog. According to a second legend, it was another animal, his ass, that was devoured. But he is always represented accompanied by a tame wolf 1. 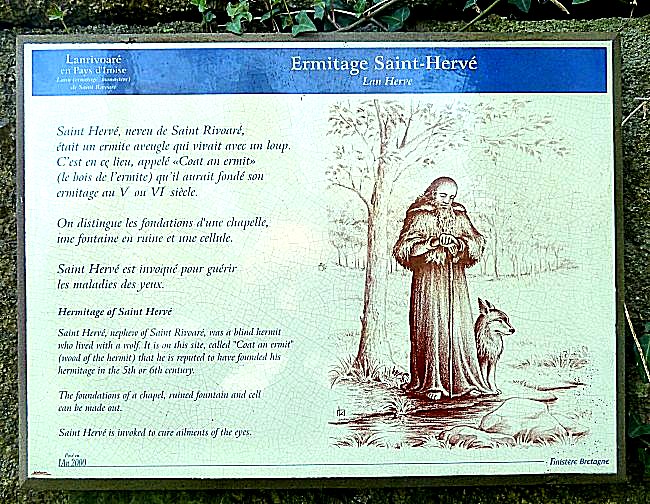 The hermitage consists of three elements : the ruins of a chapel, a sacred fountain and a stone hut which would have been the cell of the saint. Illustrated enamelled plaques affixed by the Community of communes mark out these vestiges. 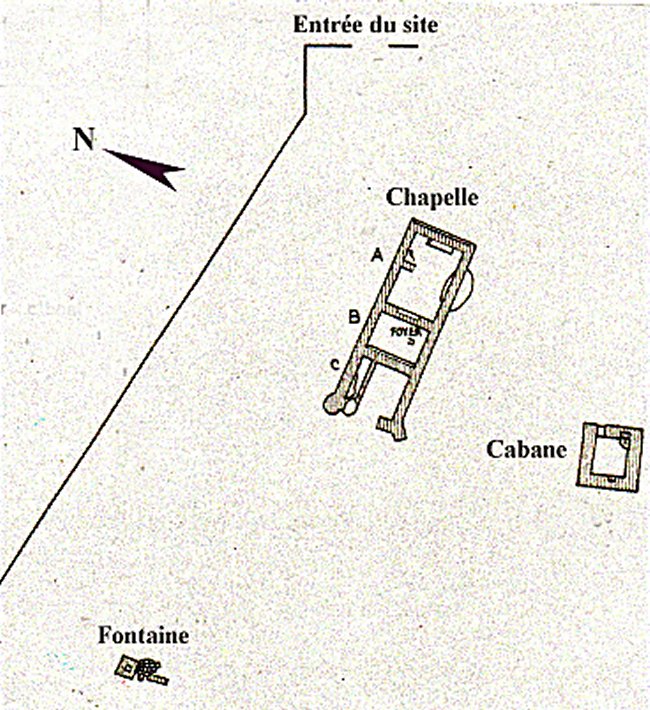 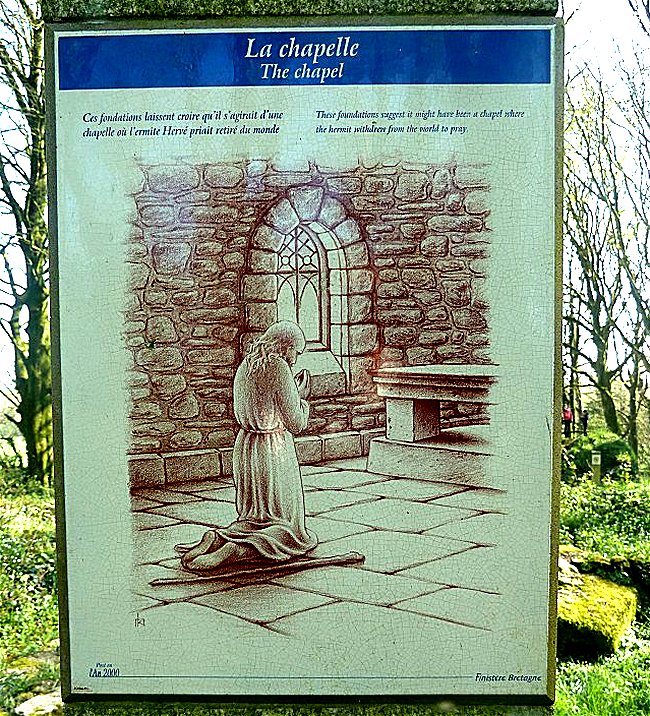 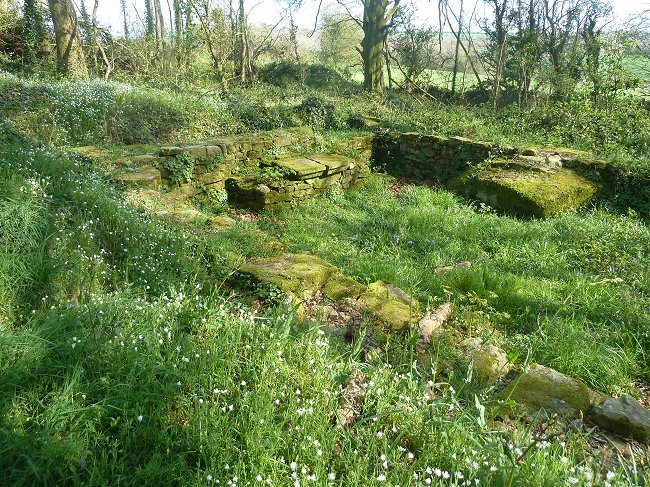 The ruins of the chapel

There is very little left of this ancient place of worship dating from several eras. At the background, the oldest chapel and its stone altar, would go back to the Xth century. It faces east and has three rooms. To the west remains the threshold of a 2 m wide entrance door.
In the centre, which is very rare in Brittany but found in Ireland, a dwelling is dated XIIth, then at the front a sacristy would have been built around the XVth century. The serving one did lodge on the spot, and excavations of rescue carried out by J. Irien in the years 1970 revealed shards of common pottery of the end of the Middle Ages until the XVIIth century. Fragments of Roman tiles have even been found, probably from the fountain or a nearby villa. 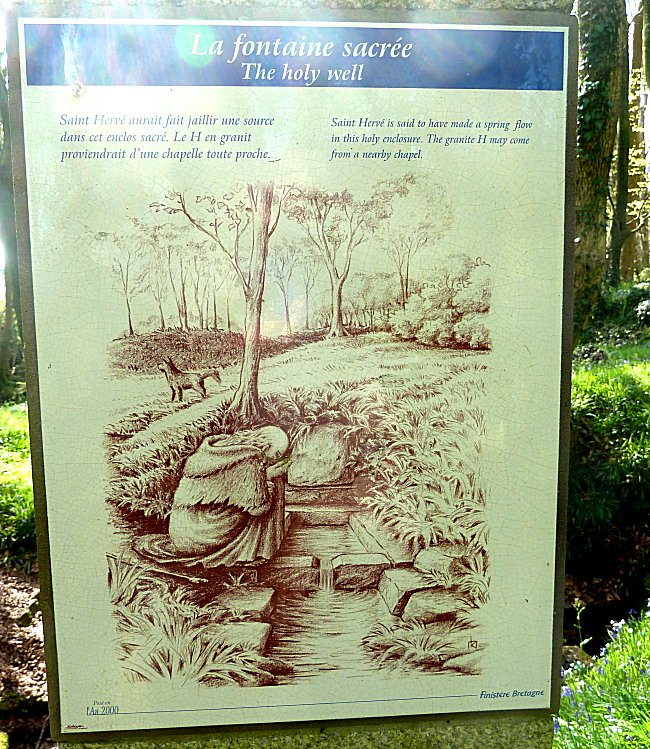 An H-shaped construction, at the level of the spring that the saint would have made gush out of the ground, supports a stone altar. This small building is probably contemporary to the last state of the chapel, the XVIIth century. However the use of the source is certainly much older. 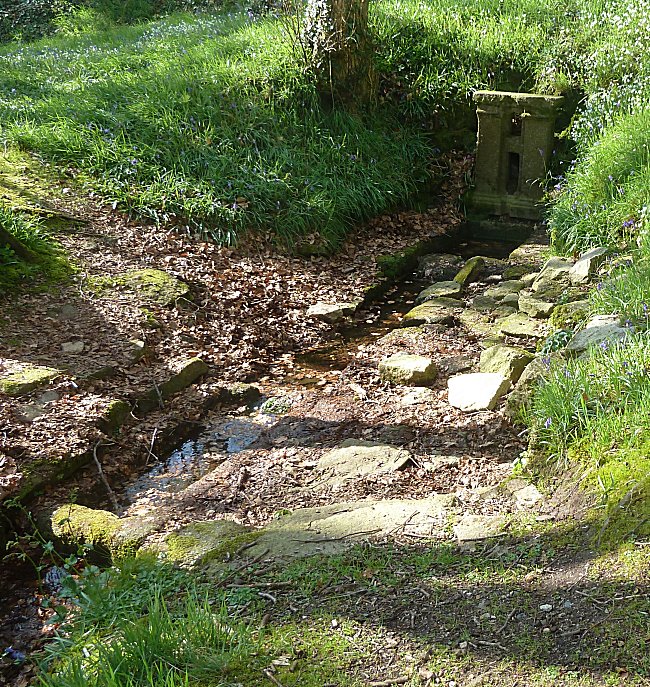 A vaulted hut, solidly built out of dry stones, is discovered lower, under a mound of earth and vegetation. 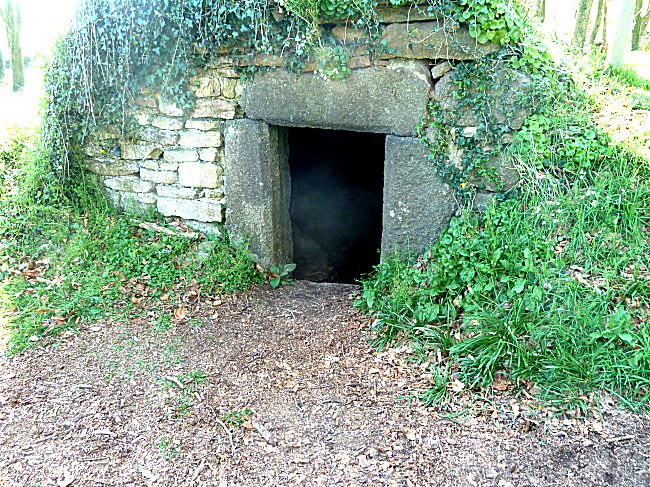 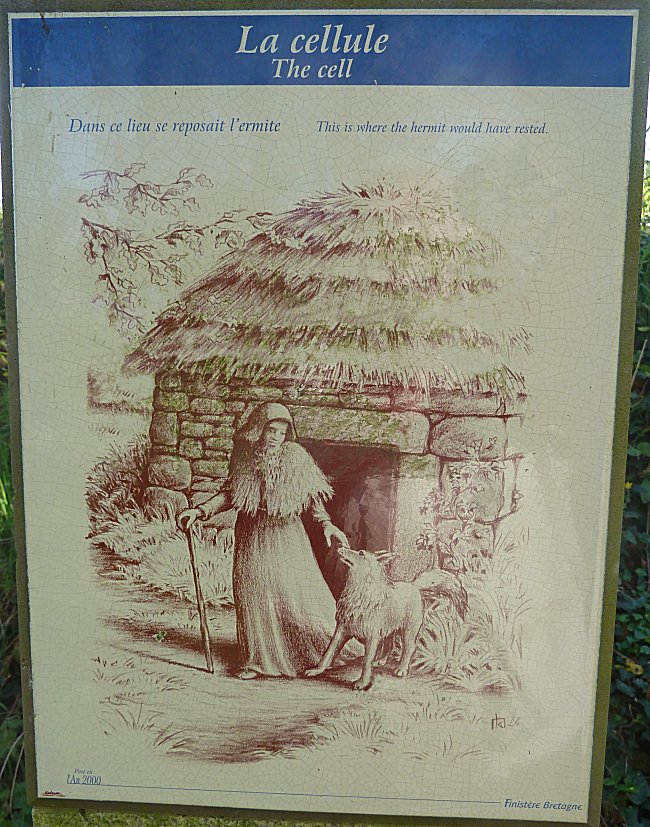 Unlike the chapel, this building facing east seems to defy time. But it would still be prudent to keep children from running around on the roof. Under a 2.50 m high barrel vault of stone, the space is reduced to a single 3.50 x 2.50 m room. The clay soil is 0.40 m lower than the outside level, which reflects the age of the site. Two niches in the walls could receive a religious element or serve as pantry. A stone of hearth is in a corner. Breakthrough in its center, it could have kept embers until sunrise. 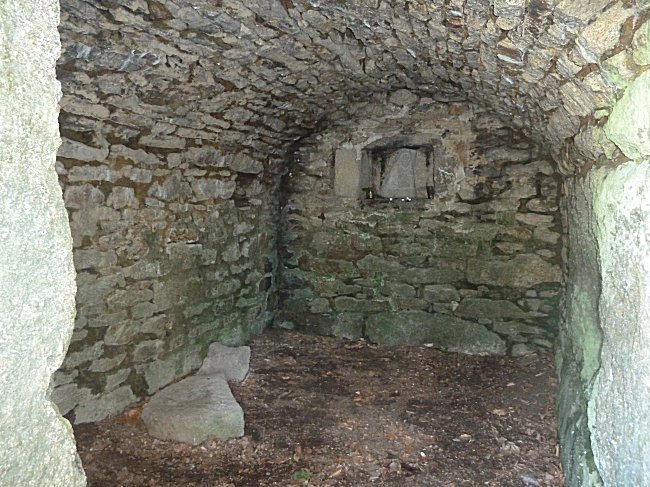 What about the authenticity of these remains? In the absence of more in-depth archaeological excavations on the site as a whole, hypotheses can only be put forward.

Obviously, this hermitage is very old. It would even be logical that the presence of a spring, as well as in many other similar places, already made it a sacred place long before the Christian era. One can therefore be in the presence of a sacred site, later Christianized.
The ruins of the hermitage itself can very well go back to the early Middle Ages. Maybe it's even an old dolmen built later. The place is isolated and precisely the source makes it an ideal place for a hermit, which would give substance to the legend. We must also keep in mind the extraordinary attraction that every holy place has been always for pilgrims. For this reason, the traces of Saint Hervé's passage might have been very well maintained and stored for centuries.
While remaining careful about the historical authenticity of this hermitage, the visitor will remember above all, that it materializes the legend still alive of a particularly popular saint. Its rich hagiography goes beyond the Leon country's framework to reflect the veneration to which Saint Hervé is subjected throughout Brittany.

In Lanrivoaré, in the Cemetery of Saints, you can see another legend about Saint Hervé ( Cemetery of the Saints ).

1- The domestication of an adult wolf is indeed a miracle. On the other hand, the breeding of cubs and their selection by humans since the Paleolithic is the origin of the 161 breeds of dogs around the world. See the off-series issue of Science & Vie Special Chiens of November 2019. 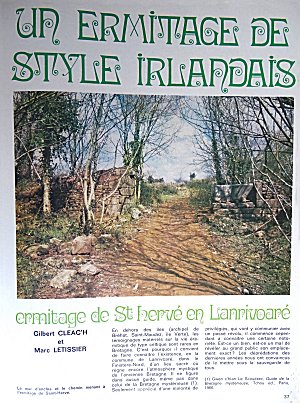 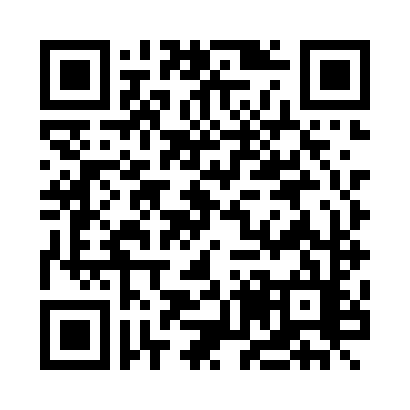