Access : This sundial is placed on the bell tower of the church. The St-Ildut Church, surrounded by its cemetery, is located at the entrance of the village when one comes from St-Renan. You can park on the large car park just across the street. 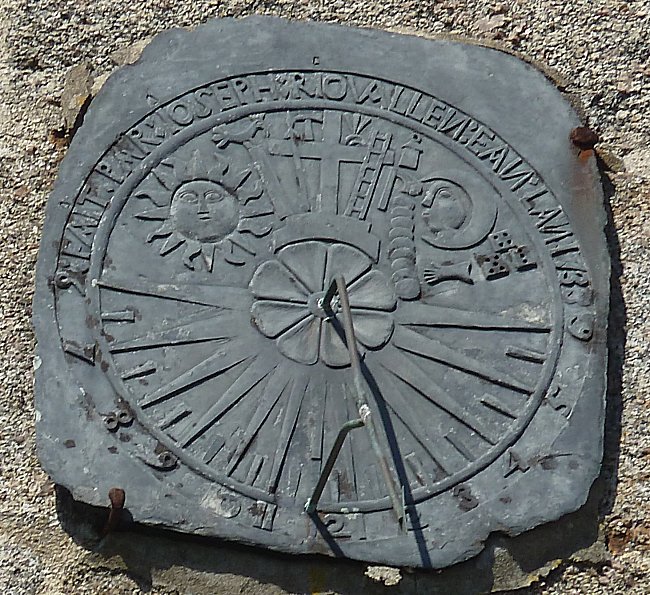 The sundial is placed above the roof of the church, on the southwest face of the bell tower. Its high position makes it difficult to see and especially to decipher.
It is a vertical south-facing dial1 dof the 18th century, engraved on a roughly rounded slate slate plate.
Restored in 2002, its style is not implanted exactly in the center of the 8 petals rosette.
An inscription in an arc of a circle surmounts the engraved elements of its upper part. It shows the name of the sponsor2 or dial craftsman and the date of manufacture of the dial :

(Done by Joseph Riouallen in the year 1733)
The hours from 6 to 12 in Arabic numerals are shown in the left quarter while those from 1 to 6 appear on the right. The lines are long for the hours, short for the half hours.

Before 1816, when the average time was introduced in the major cities, solar time was sufficient everywhere. But since the Earth is round, it was varying throughout the territory. Everyone had his own time. To transform the time indicated by the sundial into legal time, it is necessary to take into account the equation of time3 and make some complicated calculations which are explained on our page giving the list of sundials  The sundials.

Another complication: specialists will tell you that the sundial of Lanildut, like many others, gives a slightly wrong time! Indeed, the previous photo shows that its style is a little twisted. Since it is no longer rectilinear, its drop shadow is shifted. The difference can reach half an hour.


Note that the church dates from 1786. It has replaced a much older one. Originally, the dial probably came from this old building.

Above the central rose window, the dial maker engraved various elements:
- the sun and moon with human faces represent the passage of time.
They frame various symbols of Christ's Passion, the "arma christi", well adapted to the religious building to which this sundial is fixed:
- We recognize the cross, the ladder, the spear, the hammer, the rooster, the crown of thorns, the instrument of flogging, the lantern, the column, the denarii ( 9 instead of 30), the hand of the soldier having slapped the condemned man and the dice reminding that his clothes were drawn by lot.

Thus, this little known sundial speaks to us through the centuries. It was not just meant to give the necessary time. It also expresses the faith of a people of the time of King Louis XV. Despite its small size, defects and discreet location, it is a work of art and an important part of our heritage.


-1- A dial is called 'meridional' when it is a vertical South-facing one.

-2- Read on the Internet the study conducted by historian Olivier Moal concerning Joseph Riouallen : But the Riouallen family also built ships. It is not excluded that a naval carpenter could also be a dial maker.
Study by Olivier Moal

-3- The equation of time gives the correction to be made to the solar hour according to the time of the year when it is read. Indeed, the apparent movement of the Sun does not occur on the celestial equator but on the ecliptic and on the other hand, during its journey around the Sun, the Earth moves faster when the northern hemisphere is in winter rather than summer. The tables therefore indicate the correction to be made according to the period of the year.


Thanks to Benoît Ménez for his historical clarifications.