The sundial of the town hall


Access : When arriving in Le Conquet from Brest, take the first street on the after the roundabout. After 30 m, turn left again and park in the large car park (leave compulsory blue badge in car window available in local shops). The sundial is fixed very high on the façade of the town hall overlooking the parking lot. 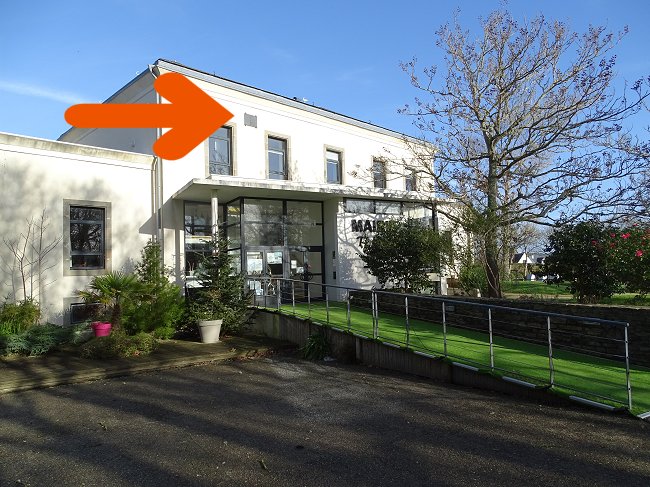 Le Conquet is fortunate to have a specialist in sundials among its inhabitants. Pierre Labat made it his passion. Not only did he calculate many of them, but he also studied all the sundials in Brittany to the point of being the co-author of a book that describes them all. So it was only natural that the municipality turned to him when it decided in 2019 to install one to adorn the town hall. 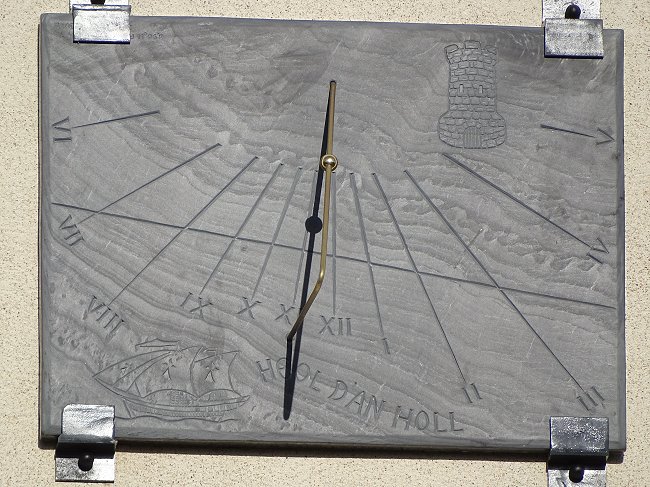 It is a vertical dial that declines from the morning1 engraved on a rectangular slate darer shale plate. The hours lines are indicated by continuous lines. The Roman numerals range from 6 a.m. on the left, to 5 p.m. right. The shadow of a metallic style tilted and parallel to the Earth's rotationaxis runs through almost the entire dial.
It gives the true solar time.

In the photo above, taken on January 12, it is about 11:10 a.m. solar time. To obtain the legal time, it is necessary to add the equation of time2, which is about 7 minutes at this month of year, the longitude correction which is 4 minutes per degree, or 19 minutes at Le Conquet, as well as one hour more due to the usual time imposed in Europe compared to Greenwich time. An additional hour would have to be added if the photo had been taken during the daylight saving time period.
According to this complicated calculation, a total of 1:26 must be added to the solar time read that day on the dial. The legal time would be 12:36. The photo was taken exactly at 12:32 p.m.; the precision of this system, which seems rather rudimentary, is therefore remarkable.

In addition to informing us about the sun time, this sundial is also a calendar with 2 dates. Come and observe it at the spring equinox on March 20, or autumn on September 22. You can follow the movement of the shadow of the sphere which is fixed on the style. This shadow follows exactly the inclined line of the equinoxes throughout the day. It is inclined because the wall of the town hall is not due south. It declines to the east at 11°06'. On a full south wall, the line would be horizontal.

Most of our sundials, that are installed on churches, are decorated with religious symbols. This is not the case here, as it adorns a civilian building. The décor is composed of 3 elements. 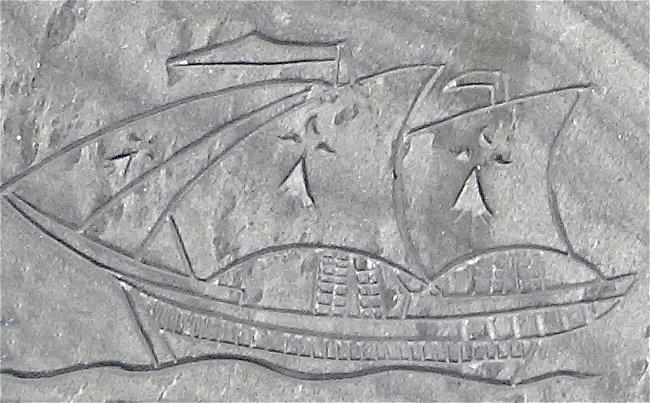 At the bottom left, the nave is the one in the center of the Conquet coat of arms. 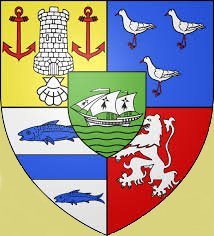 At the top of the dial, on the right, is the Kerjean coat of arms tower represented on that of the city. 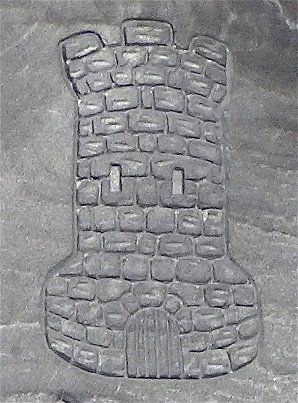 And the municipality has composed a special motto for this dial.

It chose to evoke the sun, whose presence is essential to read a sundial.
The device was obviously to be written in Breton.
Heol d'an holl means Du soleil pour tous.
Which is the wish of any seaside resort.

-1- A sundial is said to be of declining vertical type when it is fixed on a vertical plane that is not oriented exactly south-facing. It is said "for morning" or "for afternoon" when it is oriented a little towards the east or on the contrary towards the west. If it faces exactly towards a cardinal point, it is called a vertical south, west, north or east facing dial.

-2- The equation of time gives the correction to be made to the solar hour according to the time of the year when it is read. Indeed, the apparent movement of the Sun does not occur on the celestial equator but on the ecliptic and on the other hand, during its journey around the Sun, the Earth moves faster when the northern hemisphere is in winter rather than summer. The tables therefore indicate the correction to be made according to the period of the year.
See more detailed explanations on the correspondence between solar time and legal time on our page describing the sundials. 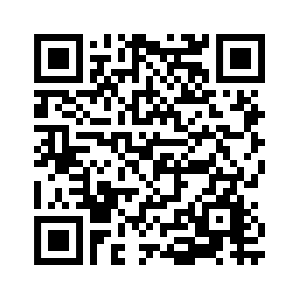