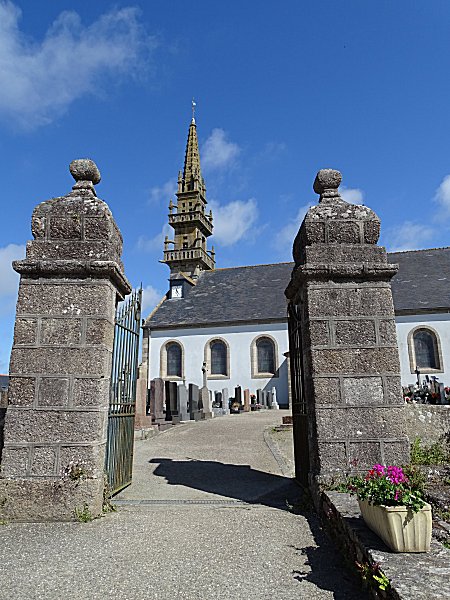 Access : Park at the foot of the church or at the back, on the Place de la Mairie, then cross the cemetery to access the porch on the South Face. 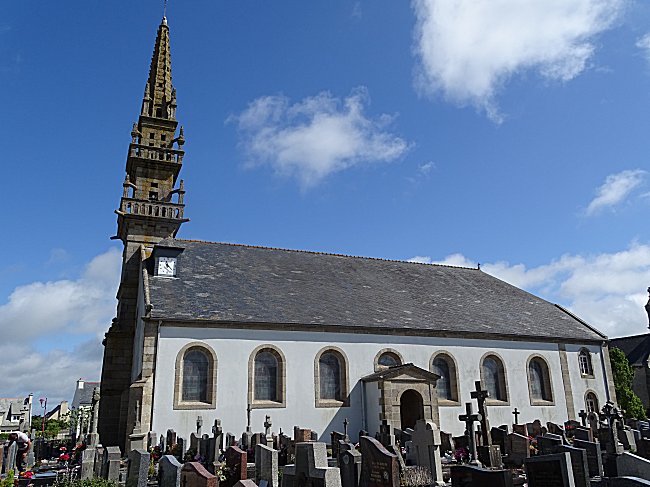 The present church dates from 1845 and replaced the previous church built in 1753. It is a rectangular building with a cut sides chevet and two porches housing a stone bench on the north and south sides.
Only the bell tower from 1753 has been preserved. This one presents two beautiful galleries with pinnacles that are overhang by a very worked octagonal spire.
At the corners of the first gallery, we notice the presence, not of gargoyles, but of false cannons.     See  Les canons d'Iroise 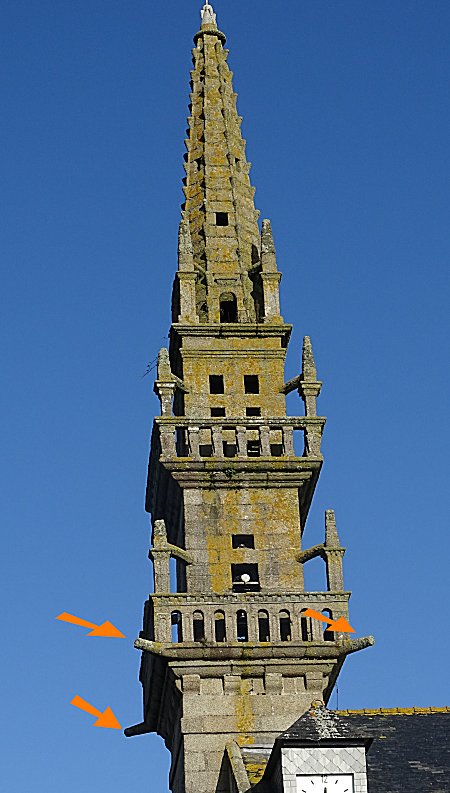 Above the bell tower portal, in a shell, a kersanton stone statue of Saint Nicholas welcomes visitors. At his feet are three little children praying in the salting tub. 1

The entrance is through the south porch. The date 1845 is engraved on it. 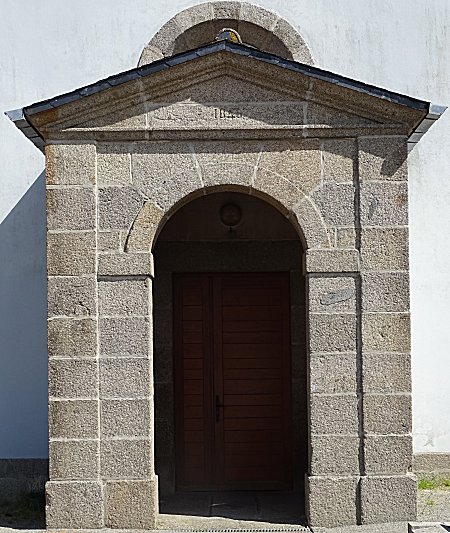 This porch comprises, embedded in the right wall, a very beautiful holy water basin in kersanton stone from the XVIIIth century. It's flamboyant shell-shaped canopy is surmounted by a naked child kneeling and carrying the cross.

The nave has seven bays and is flanked by two wide aisles. The neo-Romanesque arches rest on pillars of square section. 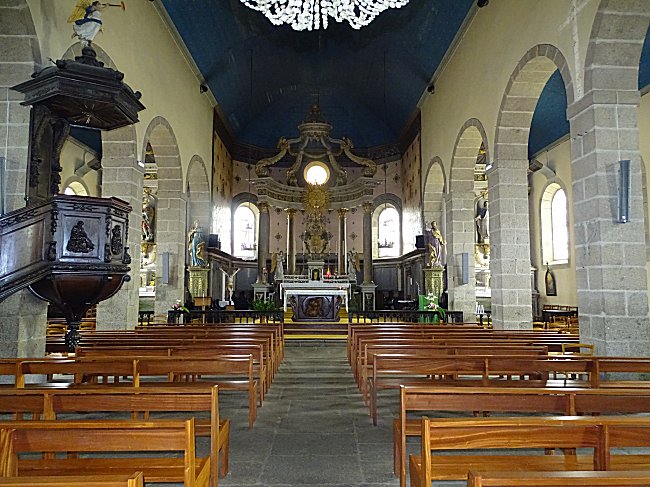 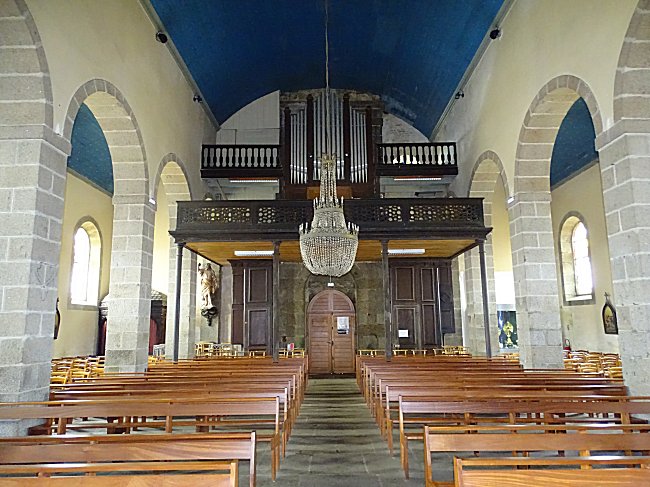 Above an enormous chandelier, the blue-night vault, panelled and cradle-shaped, represents a starry sky. Two superimposed galleries were built around the bell tower. A monumental organ has been enthroned there since 1947.

In one corner, a very beautiful confessional with the arm-coats of Saint Peter and covered with a half-dome with scales dates from the beginning of the XIXth century. 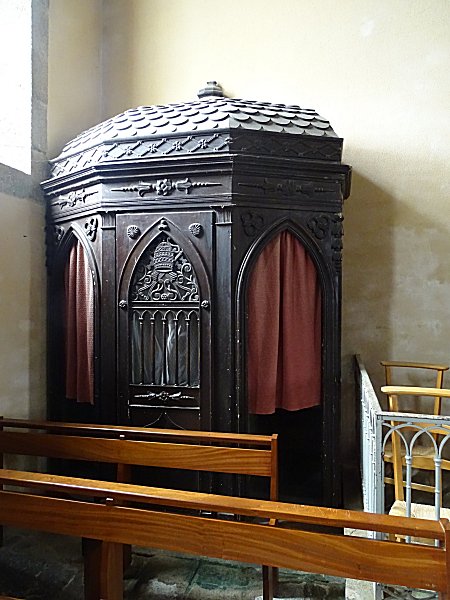 In the opposite corner, a confessional identical to this one has been replaced by a highly secured window-display in which several objects of liturgical goldsmith's work are showed. Most of them were made in the XVIIth century. 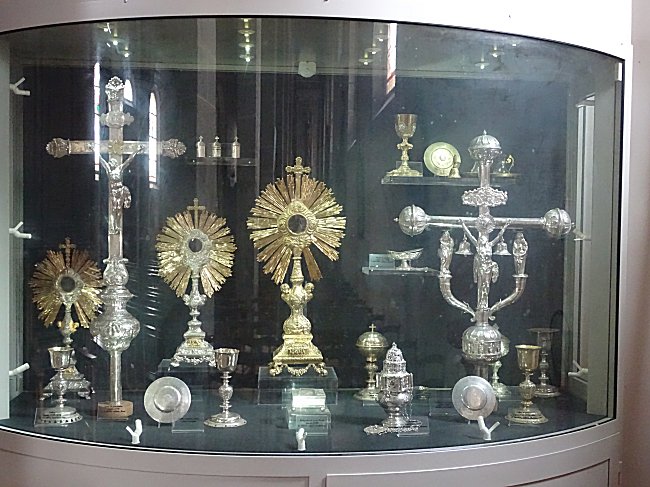 A Way of the Cross represented by 14 paintings can be seen on the walls of the aisles. 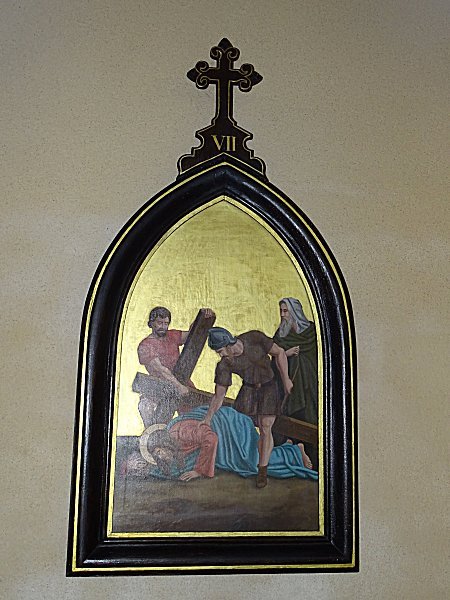 In the middle of the nave, a magnificent pulpit to preach from the XVIIIth century also deserves a stop. It features carved panels of bas-reliefs depicting the four Evangelists.

The pulpit is surmounted by a canopy and a brightly coloured original angel who blows into a trumpet. 2 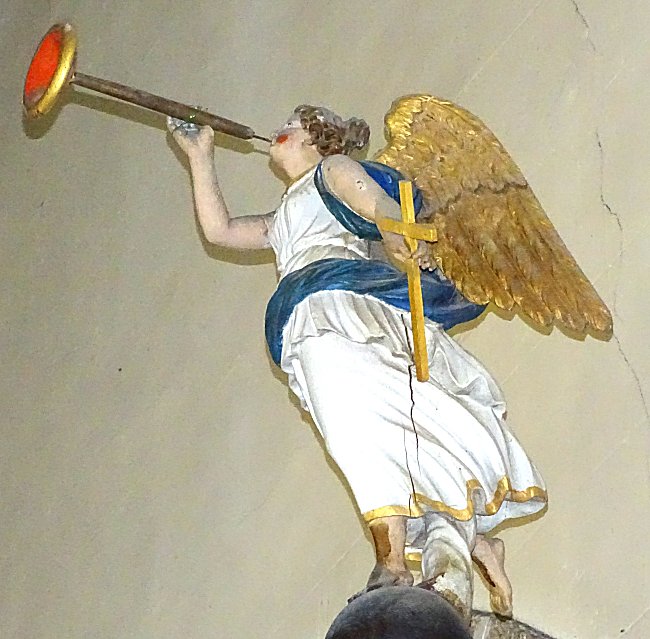 Baroque in style, all in polychrome wood, the chancel is absolutely superb. 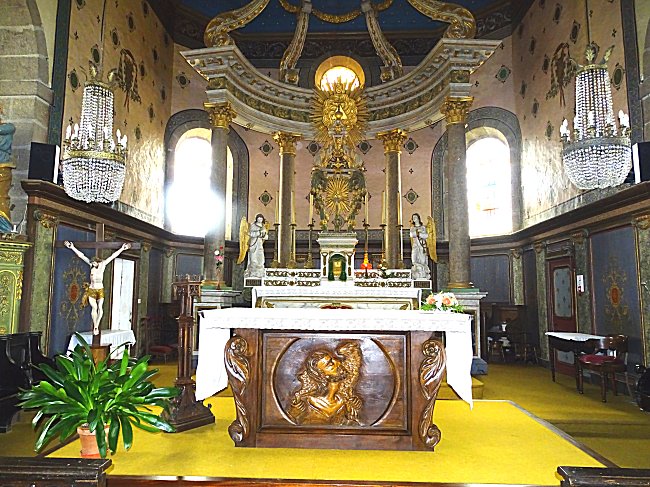 A large canopy of the XVIIIth century, formed by four high columns supporting an entablature in a hemicycle, is arranged opposite the nave. It supports with four spiralling elements a canopy overlooking the high altar. 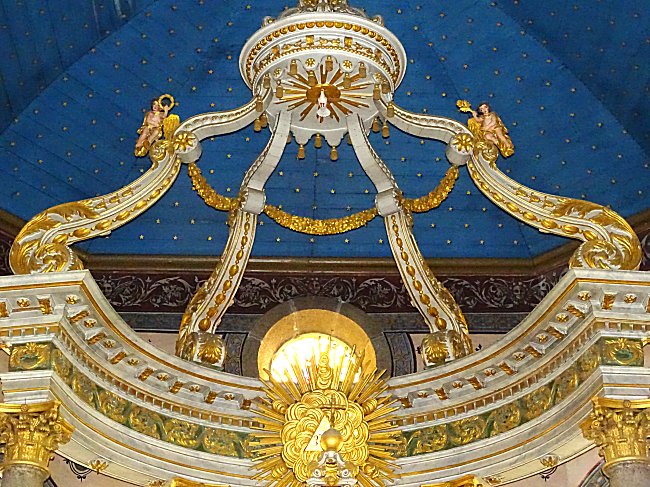 This one has the shape of a long curved tomb. It is dedicated to Saint Peter, as evidenced by the tiara and the key of his coat of arms that two cherubs designate. 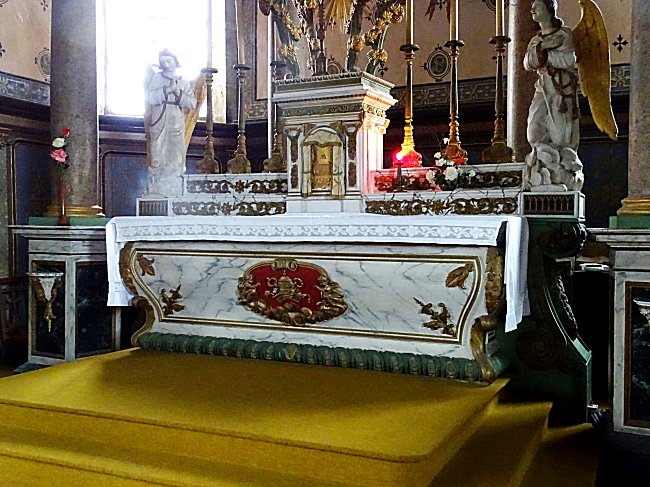 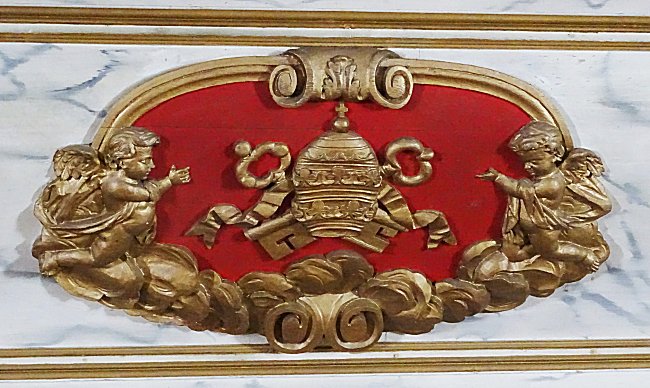 Behind the high altar stands a very original altarpiece whose tabernacle where hosts are kept is hidden behind a cloth.

A second altar, more functional, dating from 1968, presents a bas-relief of the Good Shepherd bearing on the shoulders the lost sheep. 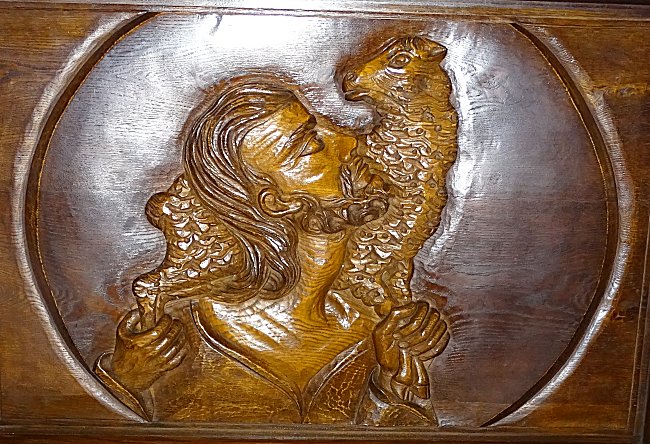 Finally, stalls placed on the sides bear witness to the presence, in the past, of clerics in the liturgical chancel. 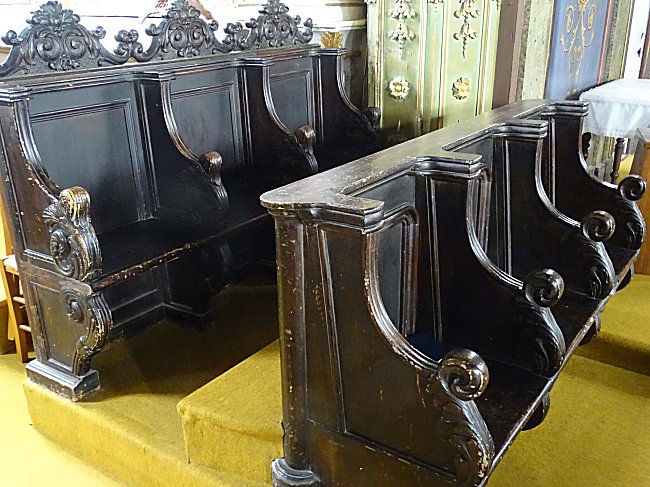 
On either side of the chancel are the patron saints of the parish.

The church is dedicated to the apostle Saint Pierre, as is also the church of the hamlet of Lamber located in the same commune. Lamber, once a truce in the parish of Ploumoguer, has been an autonomous parish since 1842. Its Breton name is "Lann Per", that is, "Monastery of Peter". According to tradition, at the beginning of the VIth century, Saint Pol Aurélien landed from Great Britain to Ouessant, then to Lampaul-Plouarzel where he founded the monastery of the Priory. He then went to Lamber and entrusted one of his disciples called Peter to lead a new community there. Therefore it could be a confusion between the apostle of Christ and the founder of the Lamber monastery which had the same first name.

Two chapels frame the chevet. Both have an altar and a column altarpiece with entablature and polychrome cornice decorated with dragons spitting fire under angels armed with censers. 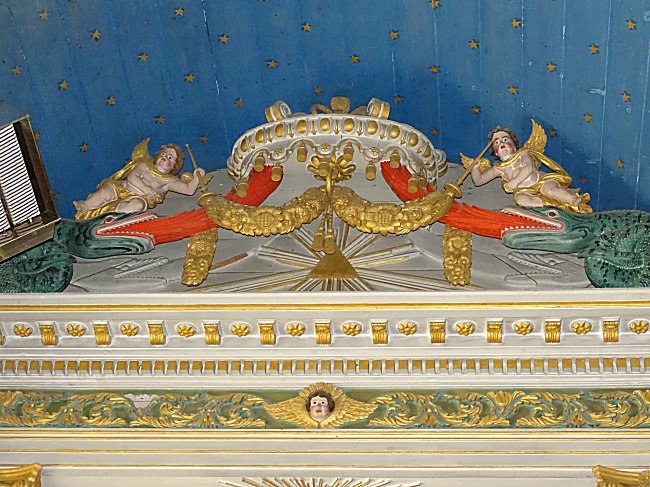 They are dedicated, one to the archangel Saint Michael, who is seen trampling a dragon, the other to the Virgin Mary, Star of the Sea, Ecce Maris Stella.

The statues of Saint John the Baptist, Saint Joseph and Saint Yves can still be seen in the nave.

Saint Yves
Called Saint Eozen in Leon, Saint Yves Hélory de Kermartin, lived in the XIIIth century.
Dressed as a magistrate, he holds here a scroll where one can read in Breton To each his right.
At his time, it was obviously not yet a question of equal rights.
Saint Yves, the lawyer of the poor, still enjoys great popularity.

As you leave the building, you will not fail to take a look at the beautiful twinned cross located at the corner of the enclosure and the parking lot of the town hall. Unfortunately mutilated, this cross could date from the XVIth century. 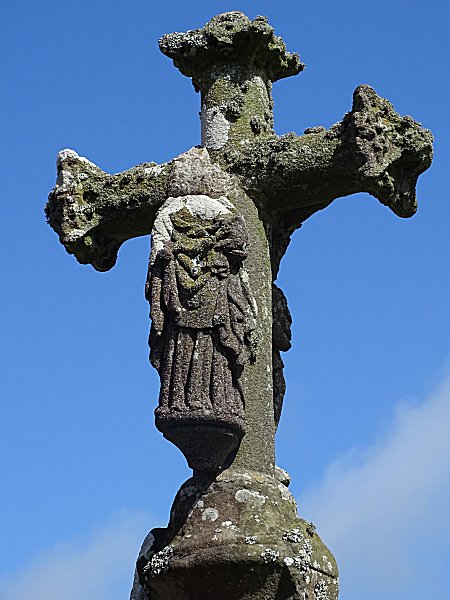 -1- It may seem surprising that Saint Nicholas, the bishop of Myre who lived in Turkey in the IVth century, has here the place of honour of a building dedicated to Saint Peter. But if his cult is still widespread in the east and north of France, it should be known that the legend according to him he resurrected three children preserved in a salting tub was everywhere very known in the Middle Ages. It is not impossible that this statue is medieval.  Chanson populaire

-2- Today abandoned, the preaching pulpits came into being with the Counter-Reformation of the 16th century, when the Church decided to get closer to the faithful. The priests were thus able to preach in the language of the population and not in Latin. Then to the Bible passages and moralistic sermons were added local notices such as deaths, marriages, births and religious appointments. From Louis XIV onwards, the king made his edicts known to the people from the pulpits. Since 1945, the desire to no longer dominate the public, combined with the technical progress of sound systems, has gradually replaced the preaching pulpit.
Here, this angel with golden wings is indeed a woman. It is a Christianized representation of Fama, the Roman goddess of fame, who, having two trumpets, one short and one long, was in charge of spreading with the first one gossip and rumours, and thanks to the second, good reputation and fame. It is from the name of Fama that come the words famous, infamous, defamer. The role of the angel at scarlet mouth, with a long trumpet, consists in magnifying the priest's speech. 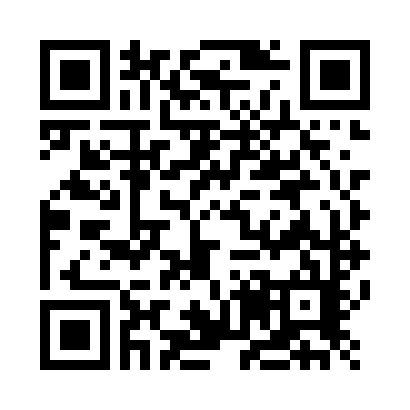