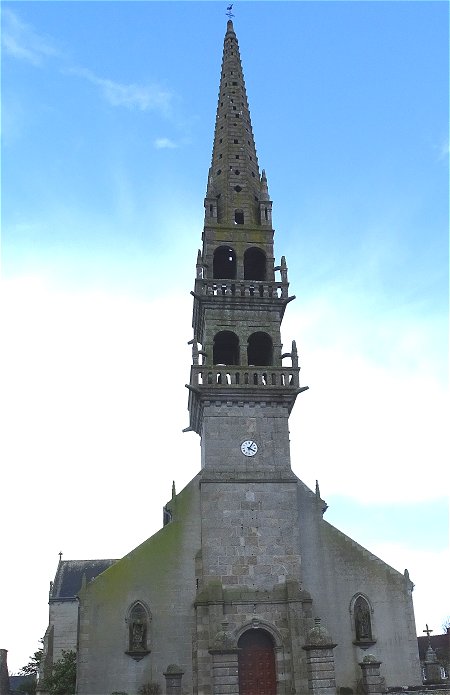 Access : Park preferably in the town hall car park and walk to the church.

The church of Ploudalmézeau is a vast building whose nave and transept form a Latin cross. Its exterior neo-gothic bell tower dates from 1775. It has two beautiful superimposed galleries each overlooking a room of bells through eight large openings. At the corners of the galleries, one will notice small pinnacles supported by buttresses. Four other pinnacles frame a slender arrow. The rooster and the cross over it were replaced after a storm in 2017. 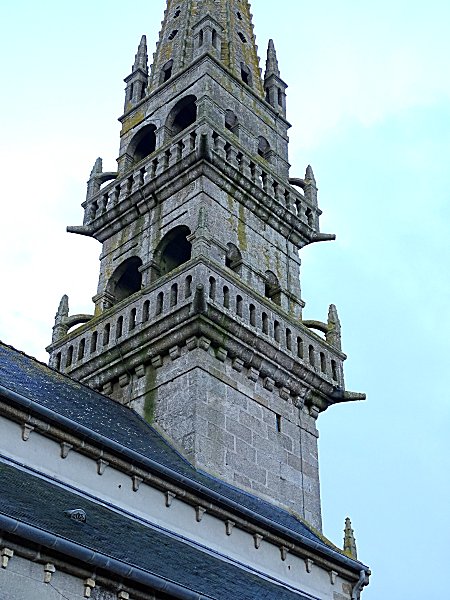 Before we enter the building, let's take a tour of this church.
Let's head left. That's with the building to our right.
To the rear, we see three windows that are obviously older than the others. 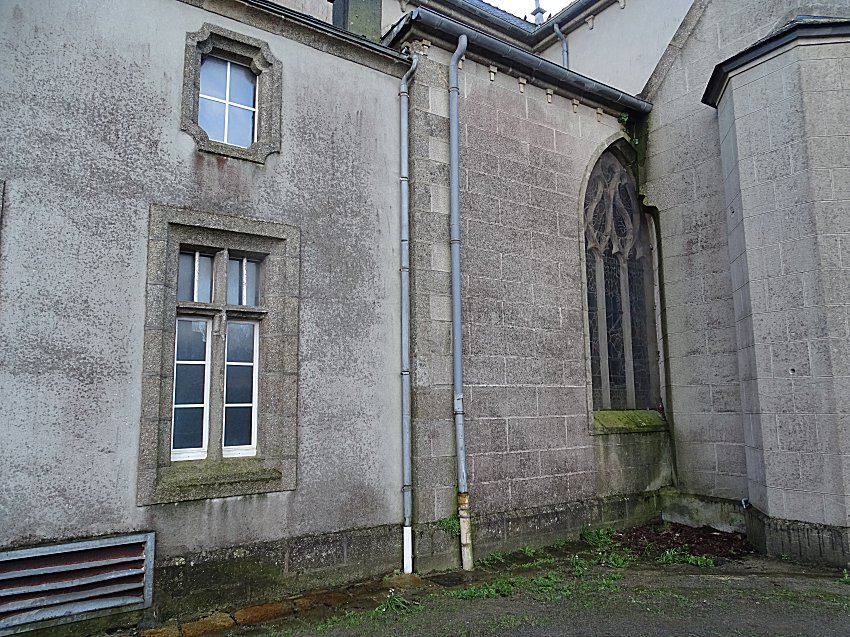 Located in the present sacristy, they belonged to a previous church.
At the very back, on the wall of the chevet, two finely engraved plates are successively discovered. It's difficult to read the first because its four lines are covered with gothic letters worn by time:

We can however decipher:

The year one thousand five hundred and four
at the end of April without renounce to anything,
at the gable of this church
was put the first foundation stone.

In french the last words of each line rhyme. It is thus a quatrain intended to preserve in an original way the memory of the construction in 1504 of the old church. The words without renounce to anything indicate that the initial project has been fully accomplished.

A few steps further, we can see another commemorative plaque, whose reading presents much less difficulties : 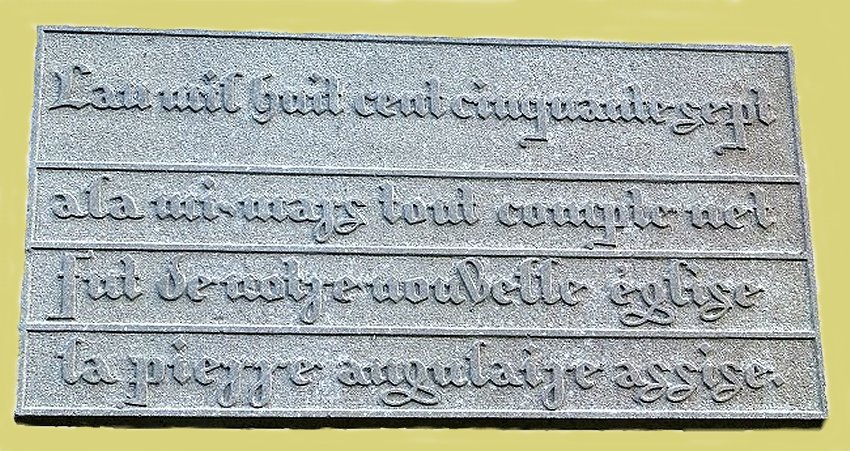 It is a new quatrain, but in more legible gothic letters:

The year one thousand five hundred and fifty-seven
at mid-March all accounts being settled,
was laid the corner foundation stone
of our new church.

In 1857, it was a question of building the present church behind the bell tower in order to replace the XVIth century church, which was both too small and too degraded. The previous church was therefore used for more than 350 years and was obviously not the first.

Let's continue our way around the building to get back to the entrance.

On either side of the portal, the visitor is welcomed by two beautiful statues of saints.

To the left of the gate, Saint Arzel is represented with a Bible in his hand, evangelizing the population.
On the right, Saint Pol Aurélien tramples the dragon whose he is said to have rescued the people of Batz island In his bishop's uniform he gives generous refuge, on the photo, to a pigeon on his mitre.

However the church is not dedicated to these two saints who nevertheless marked the region. It is first dedicated to Saint Peter, the apostle guardian of paradise. But it could be a confusion that can also be found in Ploumoguer. Among the companions of Saint Pol Aurelian, one of monks, named Peter, is said to have founded a monastery in Lamber. Worshipped as a saint, his name would then have been confused with that of Christ's apostle.

Saint Pol Aurelian, Welsh priest, is much better known. He is one of the seven holy founders of Brittany that medieval pilgrims worshipped during their walk around Brittany, the 'Tro Breizh'. According to tradition, in the VIth century, after its landing in Ouessant, Pol Aurélien would have established an oratory at the present site of the church of Lampaul-Ploudalmézeau. He then founded a monastery on the island of Batz where it is said that he released the population of a terrible dragon. King Childebert 1st appointed him bishop and offered him the bishopric of Castel-Paol, now called St-Pol-de-Léon.

The interior of the church is very vast: The nave is composed of 5 bays and two aisles. It is crossed by a wide transept whose arms house two chapels. One last bay contains the chancel. 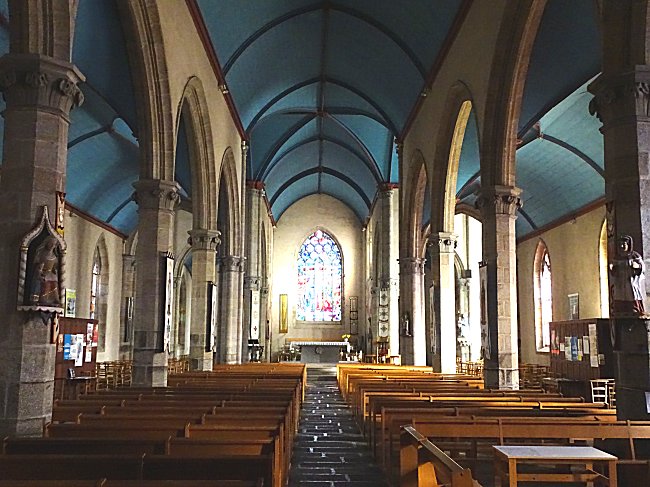 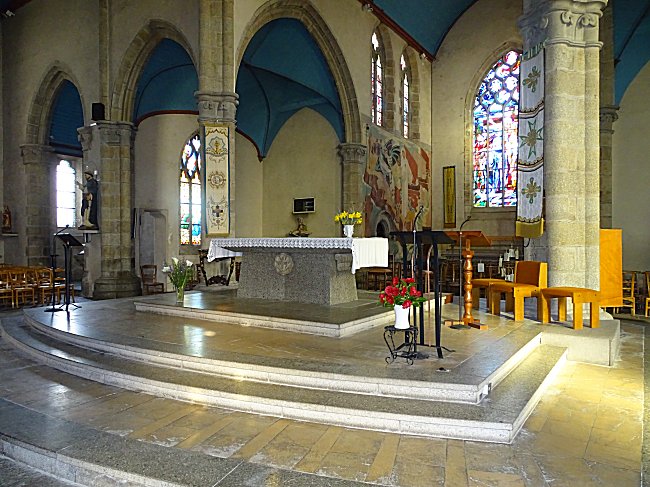 The altar sits at the crossing of the transept.

The Gothic Revival style can be found in the ribbed vaults and in the pillars capitals. 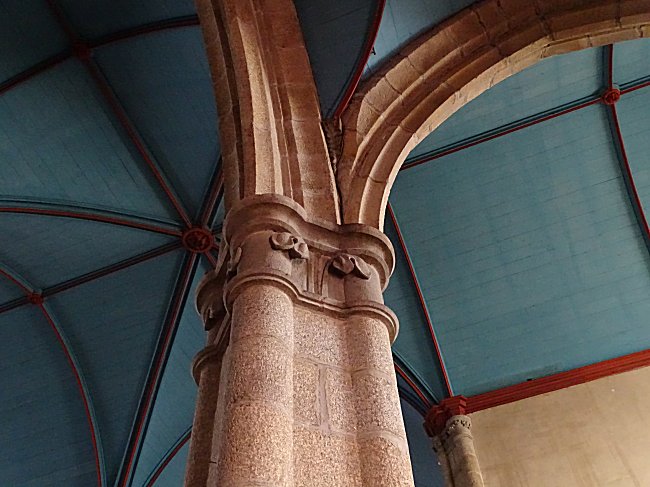 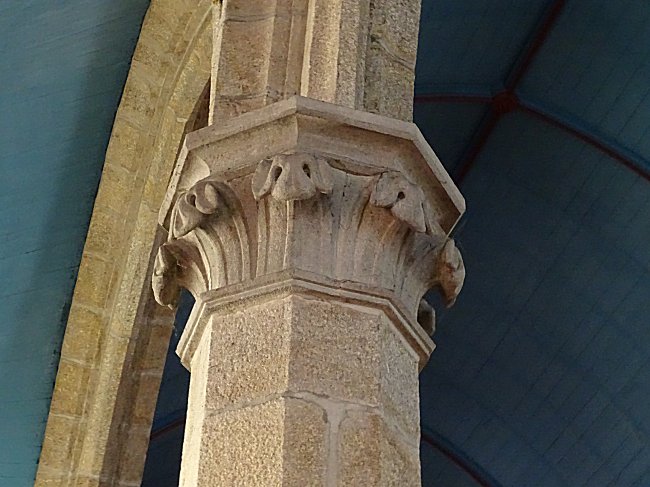 The area reserved for baptisms is in the north wing of the transept. 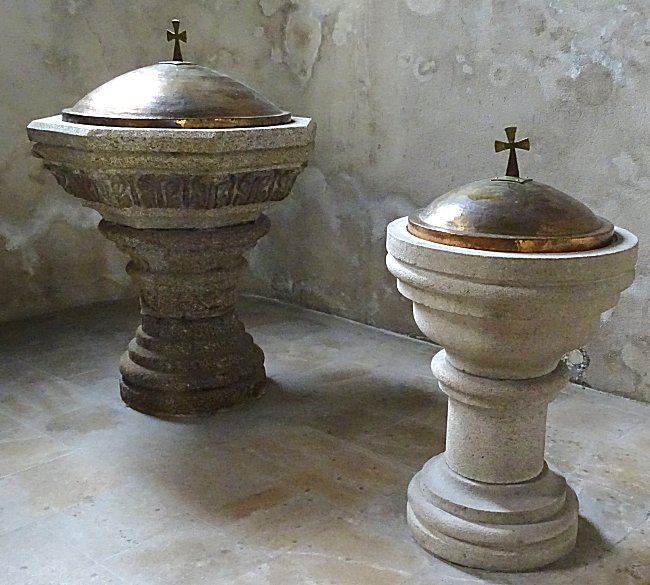 Both basins are obviously not from the same period and the oldest, with an octagonal base, could come from the previous church. 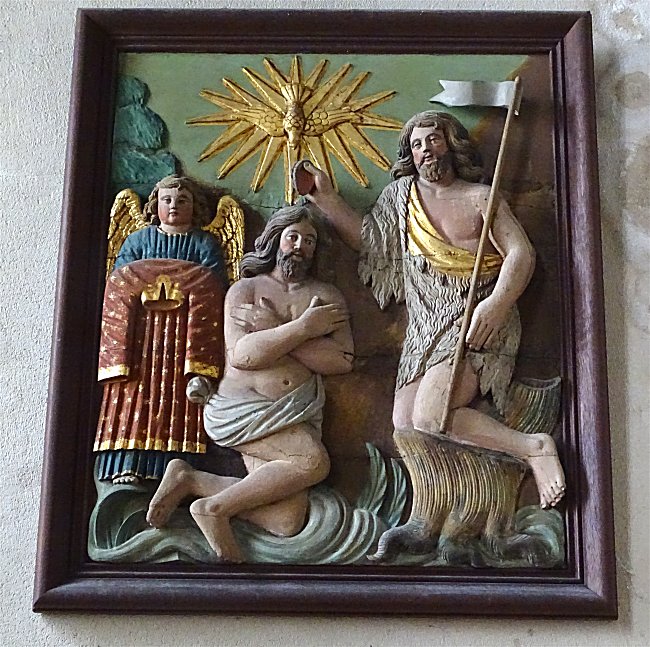 The frescoes of the chancel

The walls of the chevet present two large frescos facing each other. They are the work of the painter André Mériel-Bussy, contemporary artist, and relate to Saint Pol Aurélien.

On the right, Saint Pol Aurélien, coming from Ouessant, lands at Ploudalmézeau. 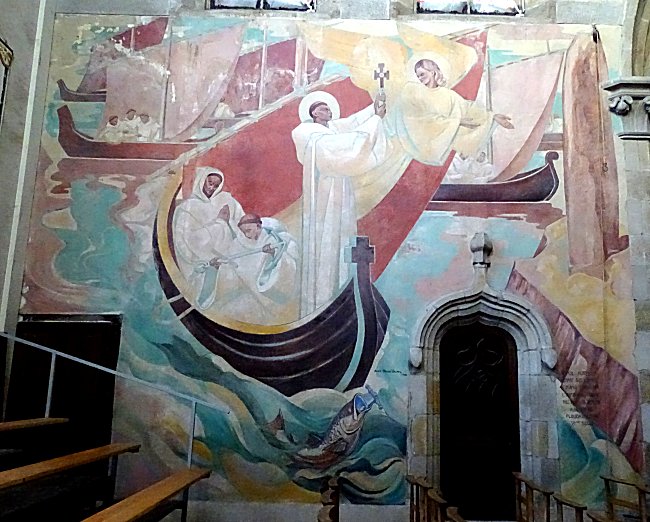 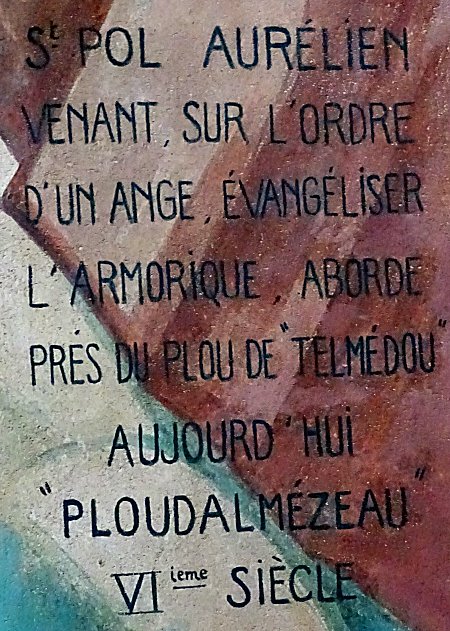 We see that the first gesture of the saint consists in christianizing a menhir, symbol of a pagan cult. The fresco thus indicates the object of his mission in Armorique.

The wall on the left shows a second fresco, just as monumental. 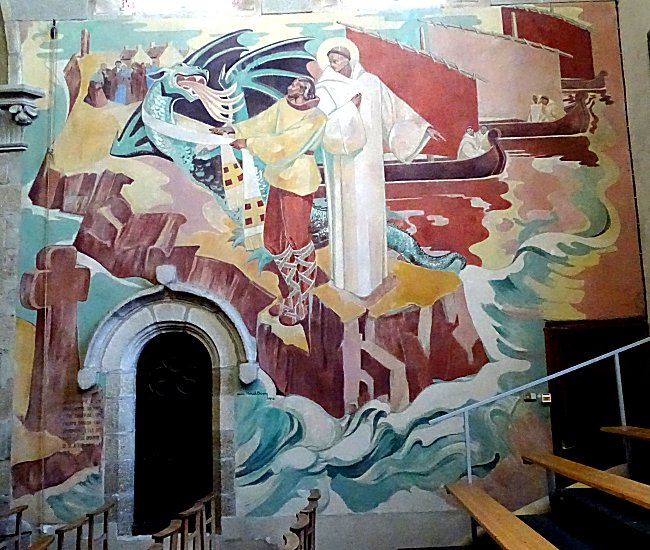 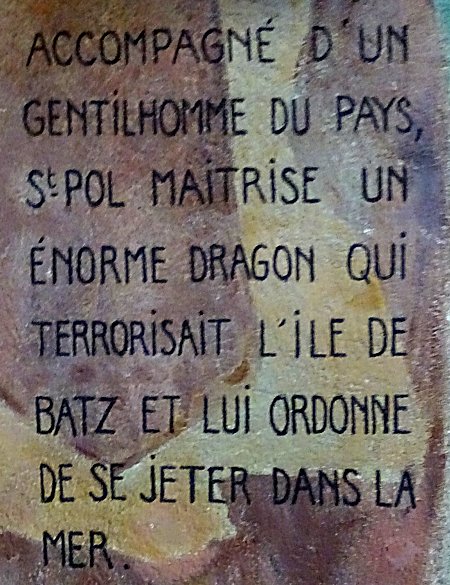 Like the archangels Saint Georges or Saint Michel, Saint Pol Aurélien slays the dragon of paganism.

We will easily recognize a whole series devoted to the life of Saint-Pierre. They date from 1913 and are the work of the Plonquet workshop in Paris. 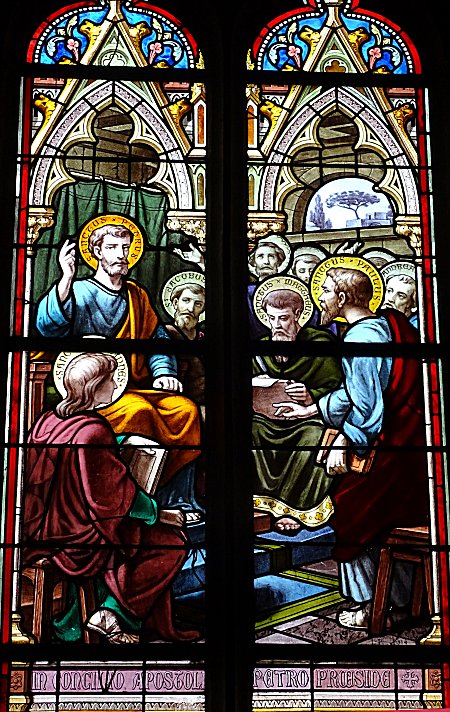 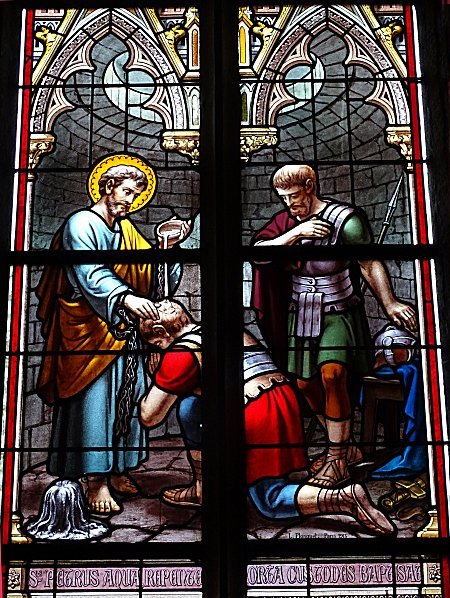 Prisoner in Rome, in his cell, Saint Peter baptizes his jailers


At the back of the chancel, the glass master represents the Crucifixion. Very modern and abundantly coloured, it is the work of Mauméjean's workshops and dates from the first quarter of the XXth century. 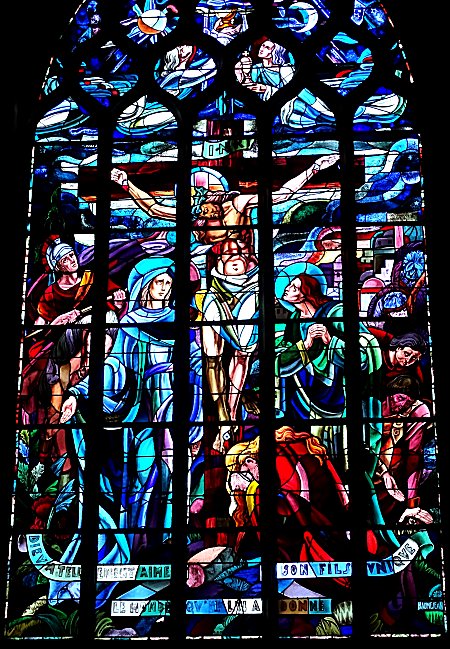 At the ends of the transept, two other large stained-glass windows face each other and dominate the chapels. They were created by the 'Société artistique de peinture sur verre' in Paris and also date from the beginning of the XXth century. 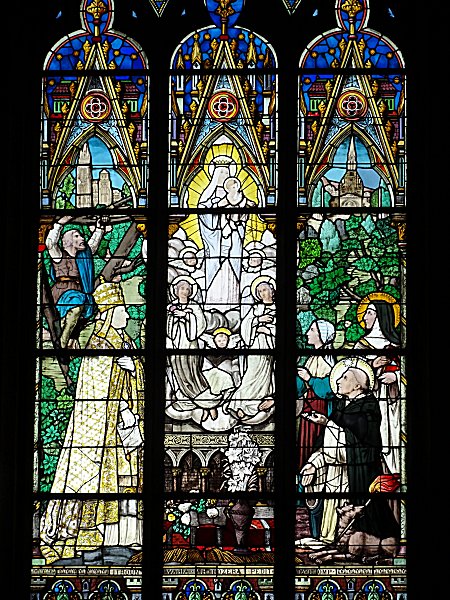 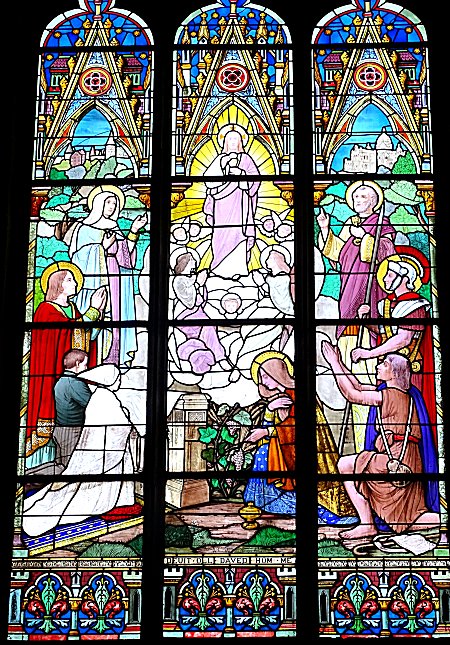 As soon as you enter the nave, your eyes are drawn, on the right, by a burial. 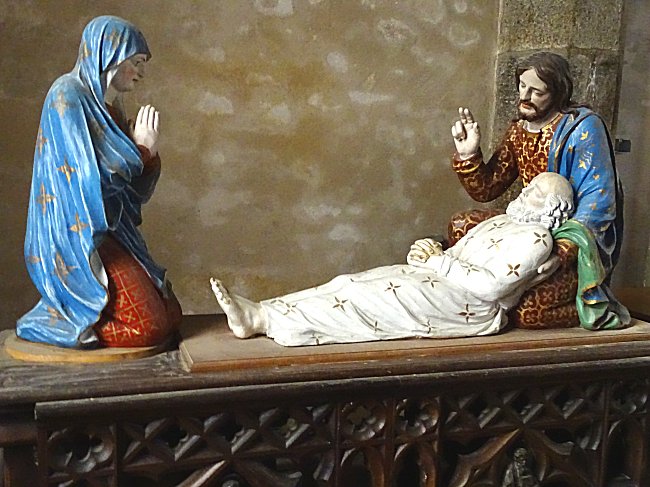 Near the chancel and the north wing of the transept, it is again the body of Christ that is discovered lying on the ground behind chairs. 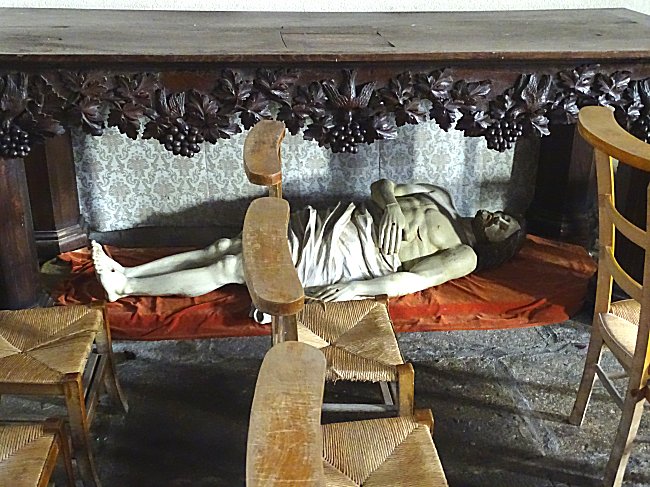 Further on, in the corner of the south wing of the transept, an effigy with a tiara reminds us that Saint Peter is indeed one of the two saints to whom the church is dedicated. This polychrome wooden statue probably comes from the old church and could date from the XVIth century.

But the church is also placed under the patronage of Saint Vincent Ferrier. This little known Spanish saint is represented here twice.

Saint Vincent Ferrier was a Dominican monk born in Valencia, Spain, in 1350. A brilliant orator, renowned theologian and friend of Benedict XIII, he clearly took sides with the Papacy of Avignon. Then he rallied the Rome's papacy in order to put an end to the schism of the Church. The Duke of Brittany Jean V made him come in his duchy in 1418 and he then traversed all the Breton country. It's in memory of his passage that Ploudalmézeau co-dedicated him his church. Saint Vincent Ferrier died in Vannes in 1519 and was canonized in 1455. He is the holy titular of the cathedral of Vannes.


Several other statues will attract the visitor's attention.

As we can see, the interior of this relatively recent church contains important testimonies of the faith of the Ploudalmézians over centuries.

And when leaving it, the visitor will not fail to take a look, outside, at the very old stone that stands in the placister. This granite cross, which could date from the XIIIth century or even be earlier, has sculptures on its four sides.

Very eroded by the bad weather, the characters appearing under the arms of the cross are difficult to identify. As for the base, it could be the fragment of a Gallic stele with chamfered edges which was thus Christianized.

Religions can change, the object of rites lasts.

Thanks to Mr. Jos Saliou and the association "Musée du Ponant" which he co-chairs, for their help and loan of documents. 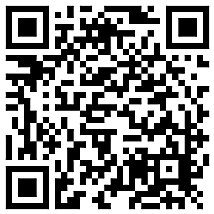