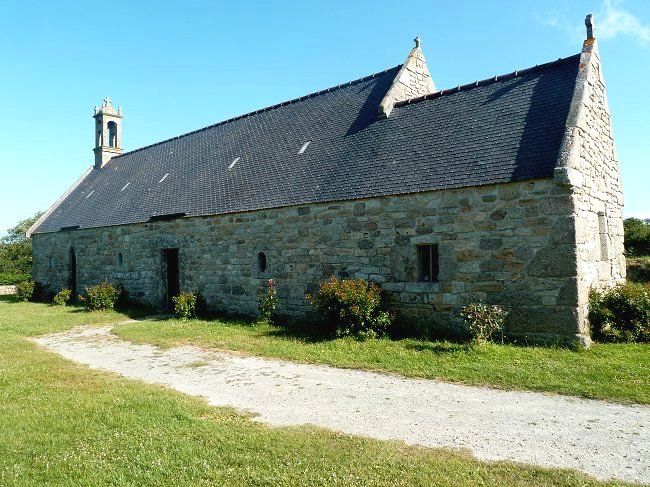 Access : From the D27, leaving Lanildut on the road to Porspoder, go throught Melon, and at the exit of the hamlet of Kervézennoc, take the first small road on the right ( "Traon Igou" and "St-Ourzal chapel" signs ). After about 700 m, turn right onto a signposted road and park 250 m further on the chapel car park. 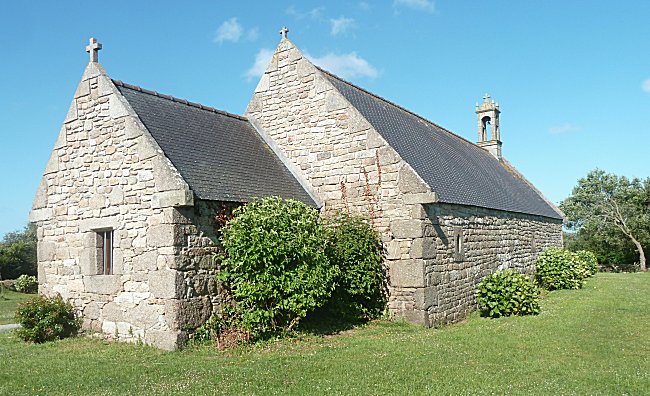 Isolated in the countryside, this place of worship is very old as evidenced by the spring and the Christianized Gallic stele that we discover in the immediate vicinity. Debris from funeral urns exhumed during work confirms this seniority which could go back to Vth century. The plot of land is called Park ar vered, the cemetery field. 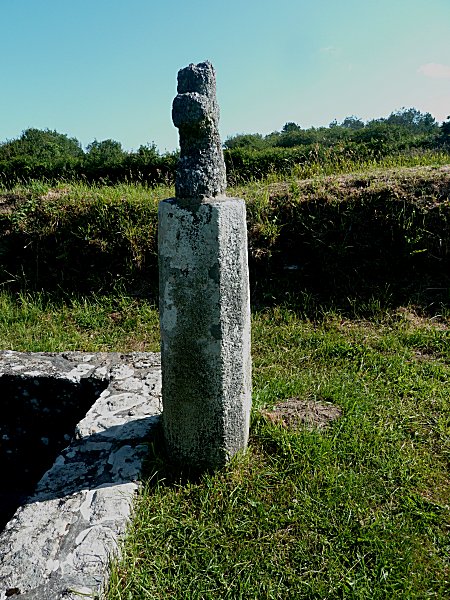 Near the fountain basin, the Gallic stele was surmounted by a cross.

A land of legends:

The environment of the chapel, where large boulders naturally outcropping with many prehistoric megaliths, lends itself to the fantastic and wonderful. The water of the fountain would have particular virtues and one plunged there three times the children who were delayed in learning to walk.
It was also a place where one invoked in Breton Saint-Ourzal in order to find a spouse:

Sailors wives did not hesitate, it is said, to sweep the chapel's floor and scatter dust outdoor towards the good side so that the wind would blow in the same direction in order to bring their husbands ashore. 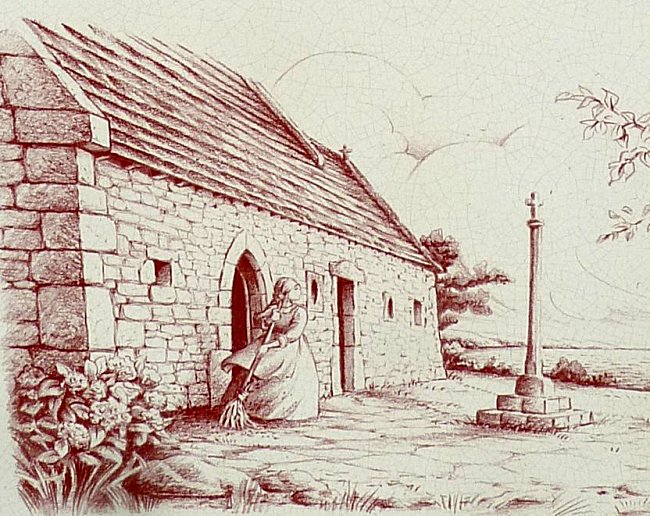 Finally, it was also said that it was enough for a farmer to go around the building three times to ensure him a good buckwheat crop.

The chapel is dedicated to Saint Ourzal, a Breton evangeliser who probably came to Armorica, like many others, during the VIth century, and whose life is totally unknown. Tradition has it that he reached the bank of Aber-Ildut river where he founded a monastery. His name, Ourzal, or Wrzal, could also be a form of Arzel, patron saint of the parish of Plouarzel which borders the Aber-Ildut. In Plougastel-Daoulas, the place called Lan Ourzel seems to refer to the same saint. On the other hand, to confuse it with Saint Armel, patron saint of Ploërmel, in Morbihan, will be more hazardous.

The present chapel was built in 1639 by René de Kermenou, lord of a nearby manor. His coat of arms appears on the base of the Calvary as well as at the top of the gables of the building : a coat of arms fess wavy Or and Azure of three pieces. ( Three blue waves on a gold background). The waves symbolizing marine dangers overcome, it is probable that the patron owned ships. 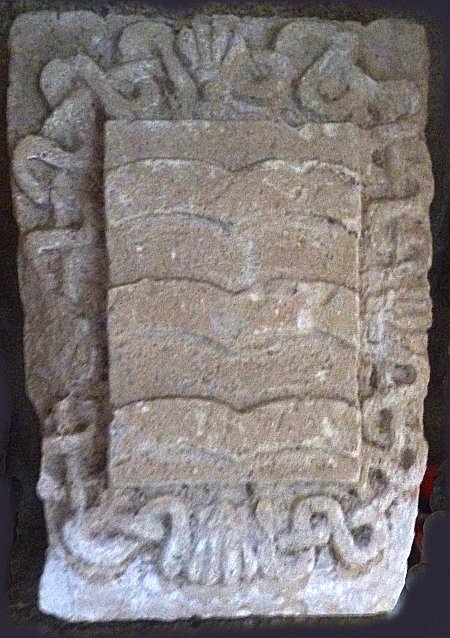 The coat arms of Kermenou

The rectangular building measures 22.50 m by 6.75 m. It is extended by a sacristy. The nave is divided by a median diaphragm arch.

A bell tower dating from 1715 surmounts the western gable which has no entrance gate : perhaps due to the winds the openings are rare and narrow. Only two doors are open on the south side.
Every year a forgiveness was organized on Easter Monday. Before the reconstruction, the last one took place in 1900.
But without maintenance, the chapel quickly fell into ruins. Already in 1910, the monument no longer had a roof, the walls tops were collapsed and the interior was gradually invaded by vegetation. The sacred building will go through a long period of hibernation. 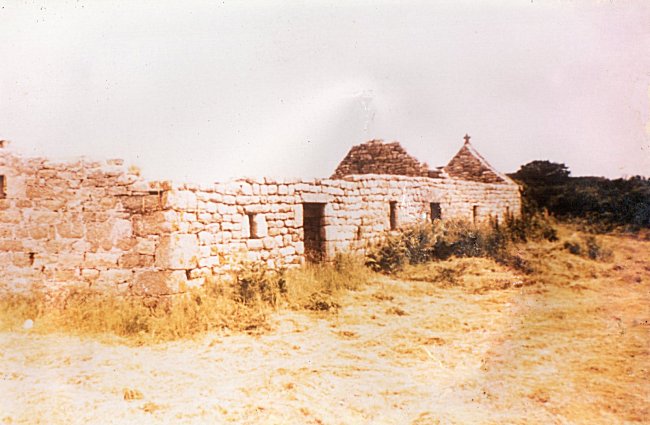 The chapel before its reconstruction

In 1979, Father Job an Irien took the initiative to revive this former place of worship. Under his impulse, and thanks to the association "Breiz Santel" which watches over the safeguarding of Breton religious heritage, youth workcamps are organized and the inhabitants mobilize themselves to take the building out of the vegetation and restore it. A local association is created, adults join the Scouts, kermesses and festivals are organized around the ruins in order to collect the necessary funds which are supplemented by grants, donations and municipal aid. 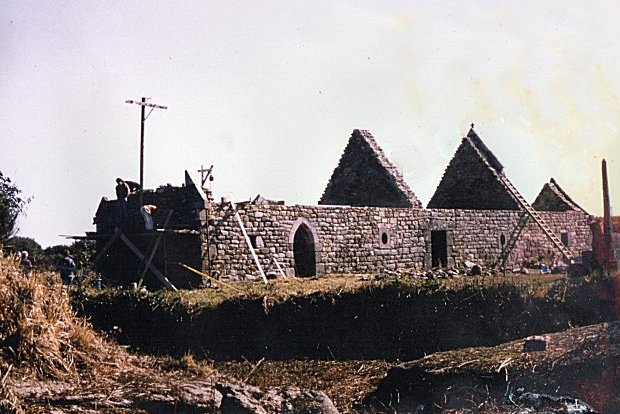 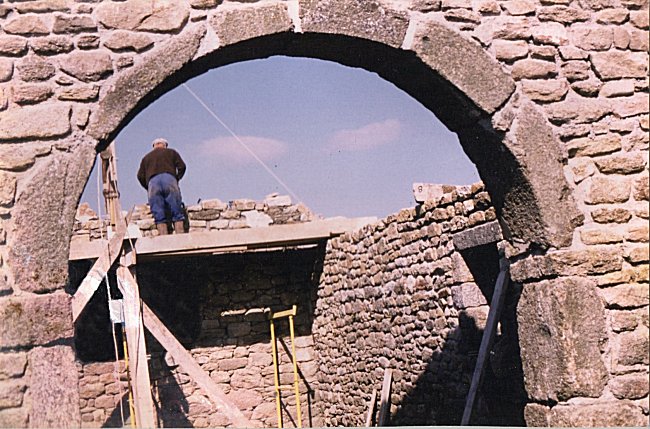 On August 4, 1991, the monument was finally put out of water and consecrated again in the presence of the Archbishop of Rennes. He can thus be reborn in worship and forgiveness resumes each year. 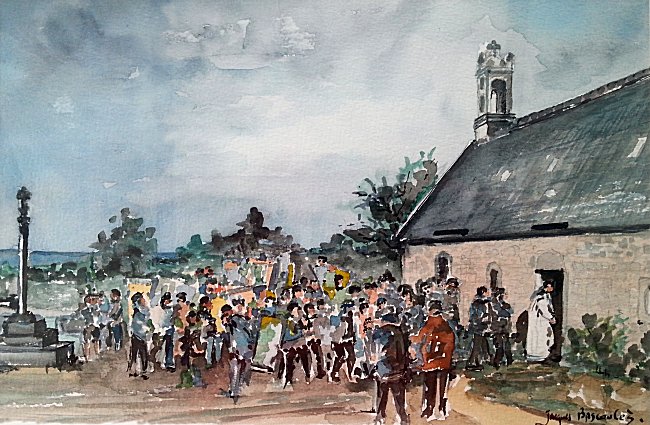 Volunteer support continues: it is necessary to coat of cement the stone walls, build an altar, decorate the oculus with stained-glass, make benches and a platform at the back of the nave for the shows to come. Because the chapel will not just be a place of worship: it have to host concerts, exhibitions, Christmas cribs. The idea is first to make it live.
The little bell is installed and blessed during the 2008 forgiveness.
You also have to think about the decoration. Thanks to donations from members of the association and several artists, the bare walls are gradually being furnished:

On that of the chancel, a tabernacle door decorated with an enamelled and framed cross comes from the church of Lambézellec. It shows the damage it suffered during the siege of Brest in 1944. 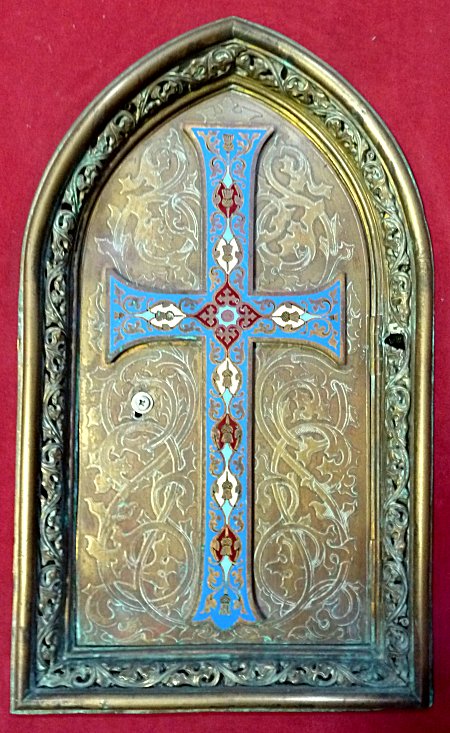 The mayor of the time, Charles Pavot, donated a large holy water font. A model ship is hung on the beams as an ex-voto to pay homage to him. 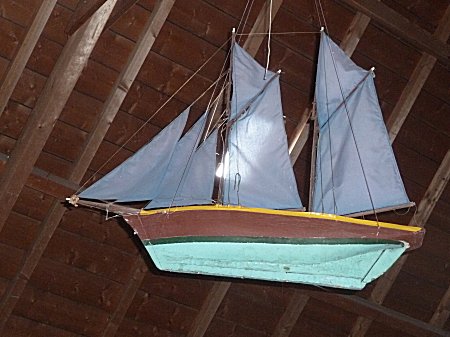 Behind the altar sits a large wooden crucifix, specially carved for the chapel and under which is engraved the inscription Father, in your hands I place my spirit.
Paintings and statues are offered at the building: "The bath of the children in the fountain" and "The paralytic of the swimming pool of Bethséda" by the artist Gwen, a Piéta, by Claude Josselin, as well as a splendid Virgin with the child, copy of "The Madonna of the Book" by Botticelli. 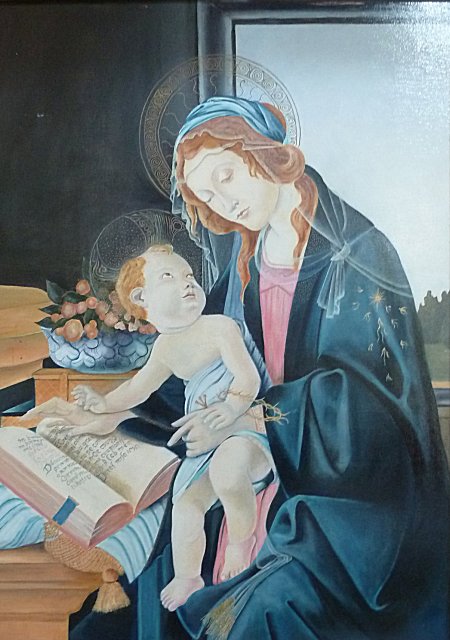 The restoration of such a monument full of legends and history is an example. Whether one is a believer or not, it is comforting to see that after almost a century of sleep and in the space of barely a generation an important element of the local heritage comes back to life thanks to the mobilization of the inhabitants and generous acts of solidarity by a large number of people.

What is possible when a cult supports an action should also be possible more generally when any element of our heritage is threatened.
Because there's so much to do about it.

Animations are planned every year in the chapel: exhibitions, concerts and songs.


-1- Gaby died on August 11, 2016 at the age of 71 after having devoted himself totally to his fellow citizens and to the heritage of Porspoder.

The association 'C.A.P. à l'ouest', from Porspoder, has done a remarkable work of research on the history of this chapel
as well as on the history of another chapel now disappeared.
First click on the link below :
Le Lien

And read more on this one :
Suite 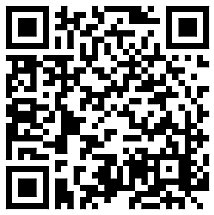