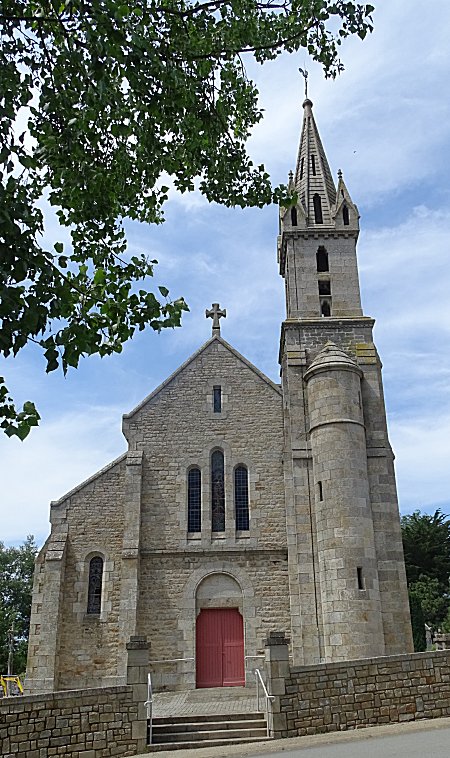 Access : From St-Renan, take the D168 towards Ploudalmézeau and cross Lanrivoaré. About 500m after leaving the village, turn right towards Tréouergat. When the road forks, continue left then turn right at the next crossroads. In Tréouergat, preferably park in the shady car park of the village and walk to the church.

The commune of Tréouergat is an old truce of the surrounding parishes. Its present name is the deformation, over time, of the name Treffgouescat that can be found in acts of the XIVth century. The church is placed under the patronage of Saint Gouescat, also known as Saint Ergat. A Breton saint, probably contemporary with missionaries from Ireland and Wales, who evangelized Armorica from Vth to VIIth centuries1. But history is silent about him. Saint Ergat is also venerated in Cornouaille and its name could be at the origin of that of several communes as Pouldergat in the south of Douarnenez.
A St-Ergat fountain exists in the woods of Tréouergat. Its water is reputed to make rheumatic pain disappear.   ( The Saint-Ergat fountain )

The church is not very old. Built from 1901 to 1905 by the architect Ernest Le Guerrannic, it replaced an old building dating from the XVth century, located on the same site, and of which there remains no trace. The side bell tower and its turret containing the staircase leading to the bell room were built in 1925 by the architect Joseph Philippe. 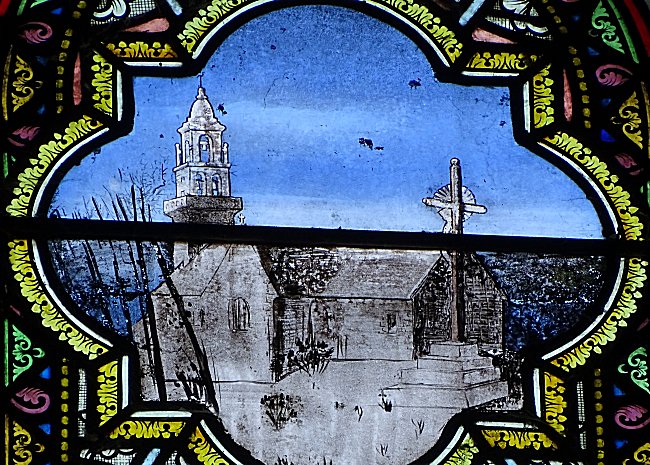 The old church on a stained-glass window of the chancel 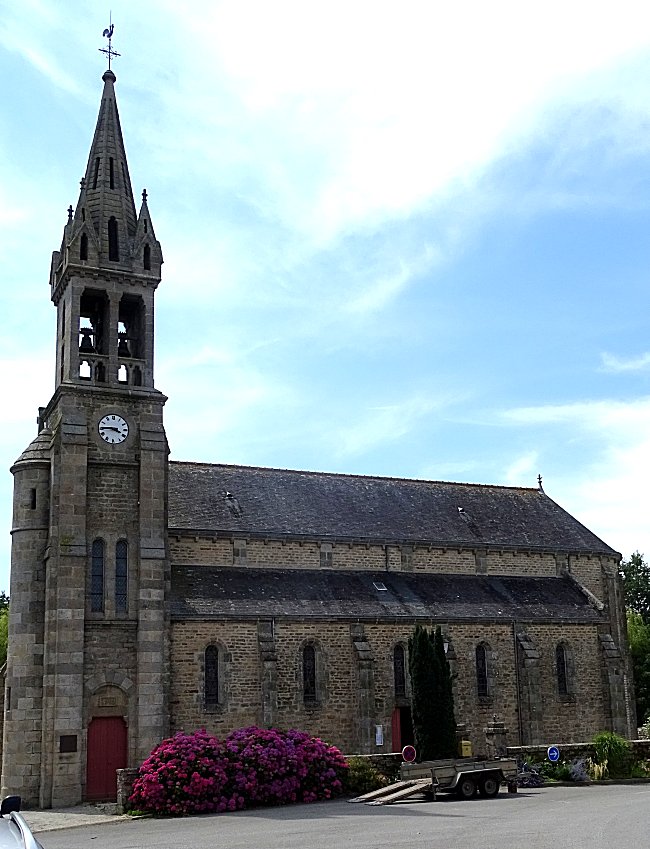 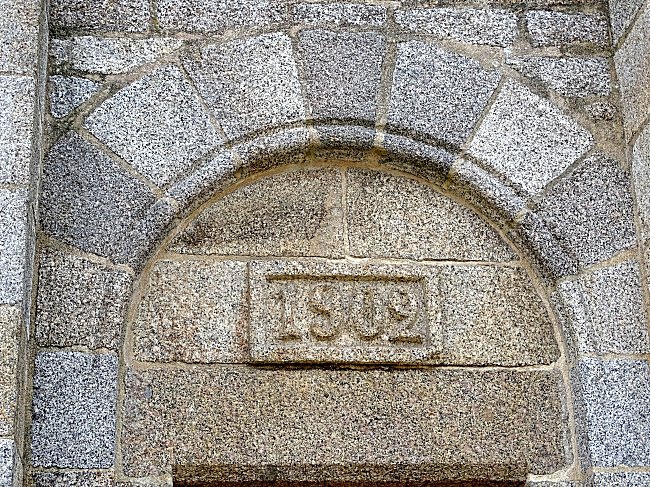 A nave of five bays is separated from the aisles by neo-Romanesque arches. It is prolonged by a chancel in hemicycle. The neo-gothic vault is supported by pillars, some of which are decorated with capitals. The walls and pillars are decorated with the same circular ornamentation painted directly on the stone in memory of the consecration of the church in 1905 by Bishop Dubillard. 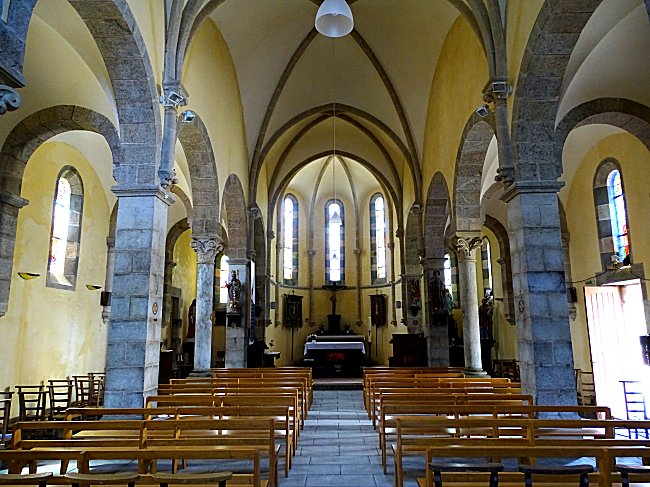 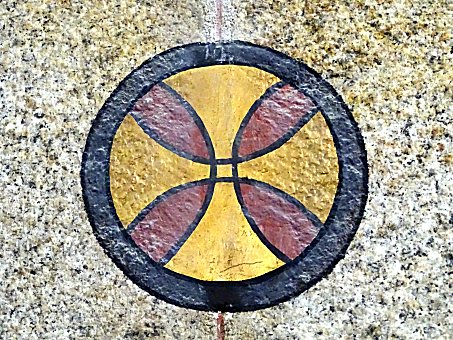 The visitor's eye is attracted by some polychrome wooden statues from the old church. They are obviously the work of local craftsmen and the imprecision of their proportions makes them all the charm. At the bottom of the nave are two representations of the Archangel Saint Michael2, represented as an officer in the Roman army. After striking down a human-faced anguiped monster representing paganism, he accompanies a soul to Paradise.

In front of the chancel, two other old statues represent the first Saint Barbe, which can be recognized showing the tower where his father had her locked up before her martyrdom, and the other probably Saint Gouescat, the patron saint of the church.

The windows are trimmed with stained-glass whose workmanship is very comparable to these of the Notre-Dame de Liesse church in Saint-Renan. Some are the work of Léon Payan, master glassmaker in Paris3, who practiced at the beginning of the XXe century, others by Henri Gesta at Toulouse, and the 'Société artistique de peinture de Paris'.

The themes of the stained-glass windows, very different from each other, seem to have been chosen by each donor in complete freedom. If the presence of Saint Ergat or Saint Pol Aurélien is obvious because of their passage in the region, one will also notice that of Joan of Arc or Saint Louis.

At the back of the church, on the side, is the baptismal font. Two pink granite pillars of the Aber-Ildut end in octagonal platforms where a basin is dug. 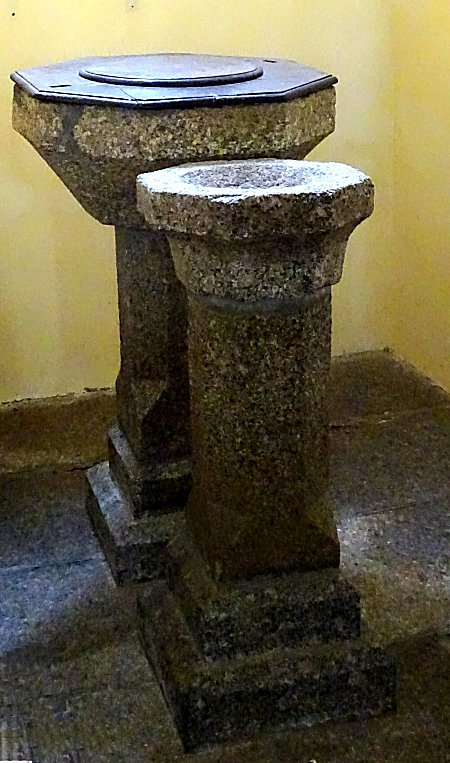 If the wooden lid of the larger one is lifted, a lead basin appears. This one is closed by a sliding lid of the same metal in order to protect the holy water while allowing its access to practise baptem. 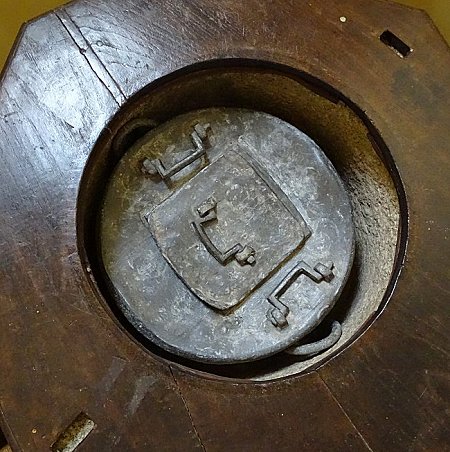 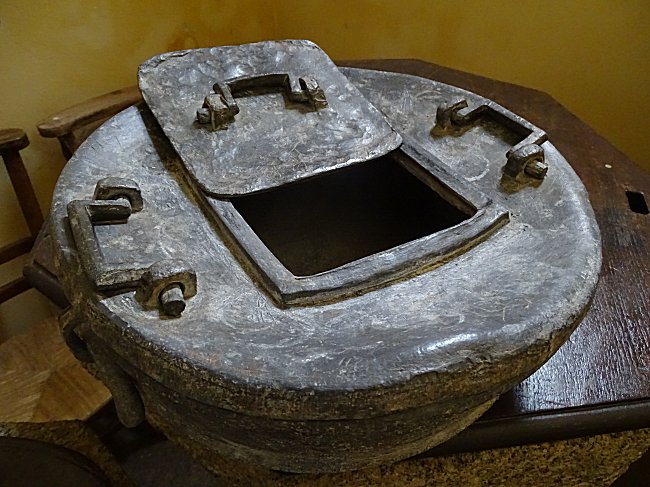 This original basin must have been made in the XVIth or in the XVIIth century and already equipped the baptismal font of the old church. Its origin and manufacture are unknown. It should be noted, however, that the lid and the edge of the lead bowl are engraved with a letter in Gothic script which could be an "a".

In 1990, this baptismal basin was selected to participate in the exhibition Arts de Bretagne in Vienna, Austria. The small commune of Tréouergat was very proud to be represented there by an original ambassador of its heritage. 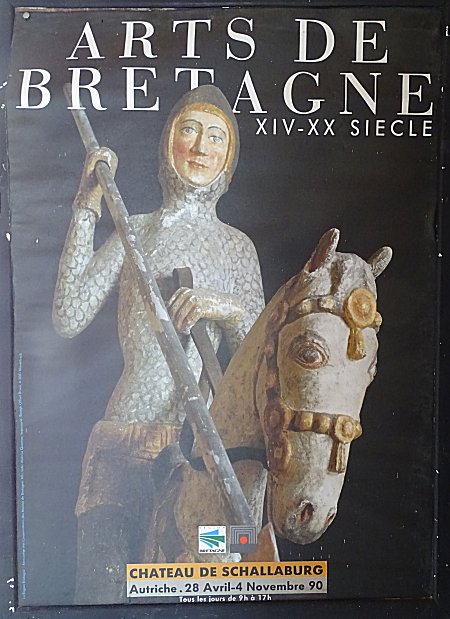 A beautiful sundial once adorned the old church, as shown in a drawing above the transept window: 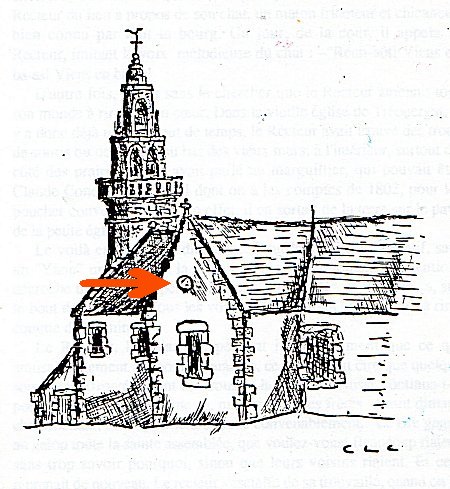 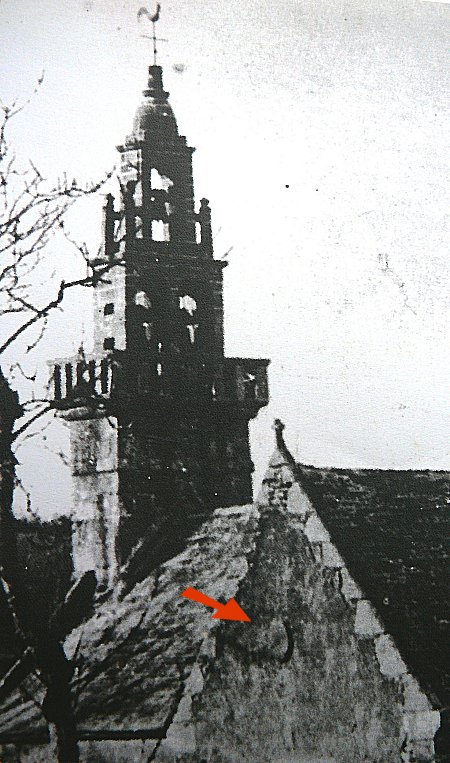 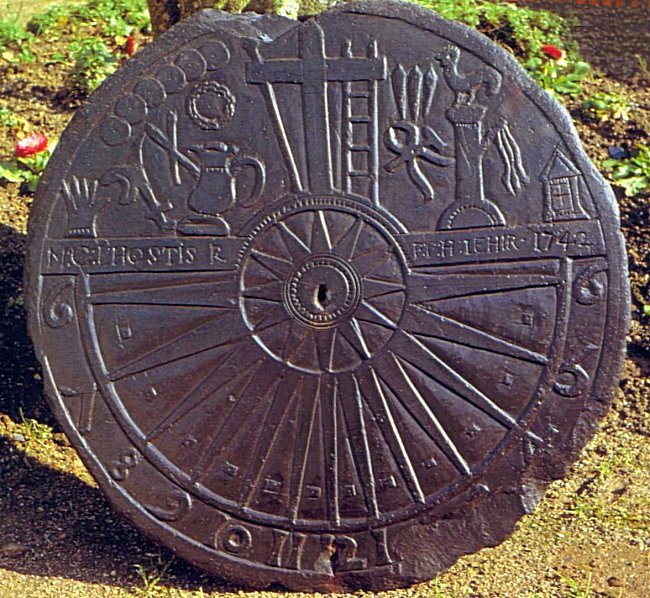 
But don't look for it on the walls of the building because, alas, this southern vertical dial made on a slate plate in 1742 by the Hamon Le Hir dialman has disappeared from the presbytery where it had been stored and has not yet been found. In case an Internet user would recognize it somewhere, in France or abroad, he is kindly requested to inform us immediately by mail ("any information/contact" button at the top of this page) so that the commune of Tréouergat can recover its property amicably.

Outside, bordering the cemetery, there are two altars in the open air. Near the sarcophagus of one of them, on the ground, a decapitated statuette represents two characters back to back. 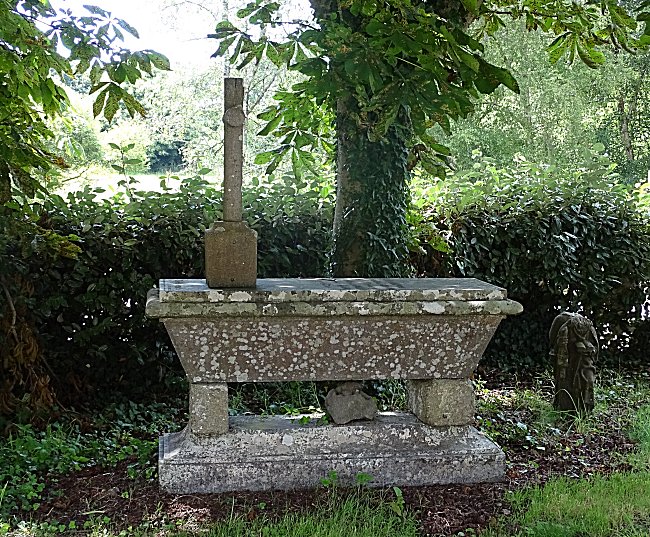 This small twinned statuette does not fail to intrigue the visitor. Holding a bible or a gospel, he is probably a saint, perhaps Saint Ergat himself. One will notice the curious presence of a small character in the folds of his clothing4. One can think that this statuette comes from an old calvary of the commune having been degraded during the Revolution. Another fragment is reproduced below. 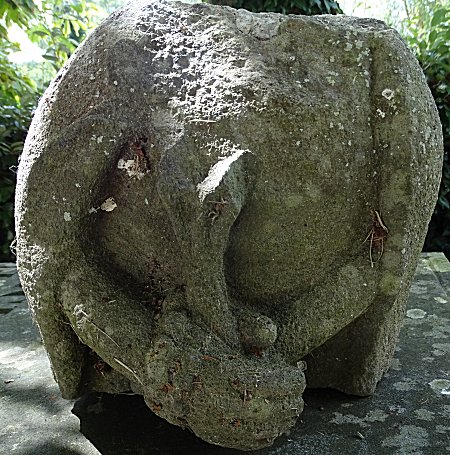 Further on, the engraved lid of an ancient sarcophagus has been incorporated into the wall of the cemetery. Although the coats of arms have been erased, according to Louis Conq5 it could be the medieval tomb of the knight Maurice de Languiouez, who died at the battle of Auray in 1364 under the banner of Charles de Blois and Bertrand Du Guesclin who were beaten by the English party of Jean de Montfort. 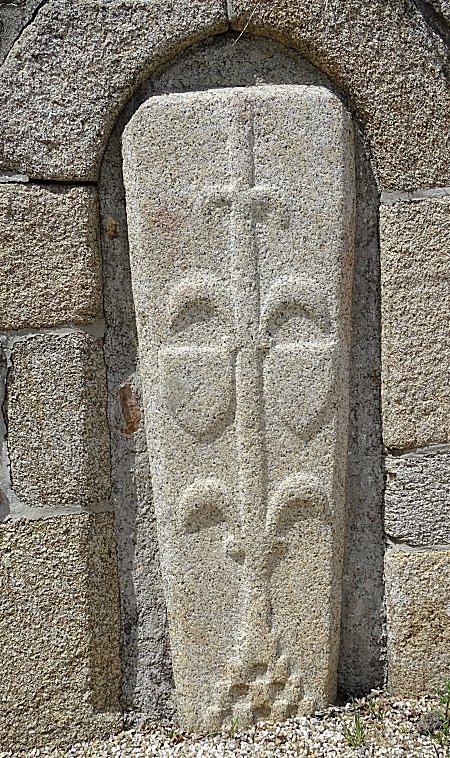 -1- According to a text by Théodore Hersart de la Villemarqué, collected by Robert Tréguer in the "Revue de Bretagne, de Vendée & d'Anjou", volume 2, 1889, Ergat was one of the 24 sons of the bard king Loumarc'h, in Wales, where he died in battle against the Anglo-Saxon invaders. Poet and bard himself, venerated by the people, his skull would have been brought to Treouergat in the VIth century as a relic by the Welsh monks. Here is what the author says :

"To the truth, the saint has made us forget the poet on the continent: the defender of religion and homeland, among the ancient Bretons, is only invoked today against rheumatic pains and it is as such that the last descendants of the tribe of the saint know him.
Preserved by them with extreme care as their safeguard, the skull of Saint Ergat was exposed, once a year, to the veneration of the parishioners, in a silver reliquary, when a decree of the year II of the Republic came to cast consternation among the faithful of the country : under this Order-in-Council, the remaining silver was to be sent to the Mint for smelting. He was, and the skull was thrown on the pavement and smashed to pieces. Fortunately, the piety of the sacristan saved him : when the cult was restored, they were placed in another, more modest reliquary, and they are still exposed to public veneration on August 11 of each year, the day of the patron saint's feast."

-2- There is no doubt about the identification of these statues: only the Archangel Saint Michael has wings. However, he bears on his shield the cross of St. George. This can be confusing because St. George, a Roman officer, symbolized the Christian knight triumphing over paganism. But it would be hard to see Saint George without his horse. 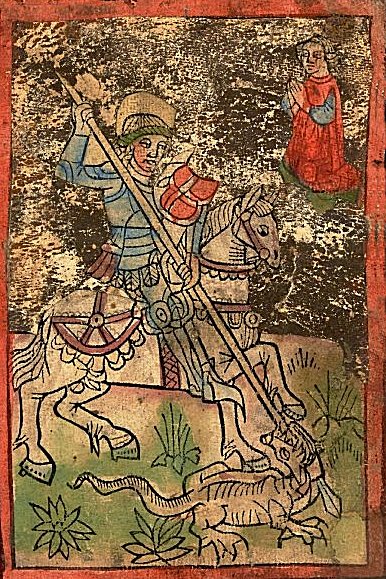 Coloured wood engraving, made in Burgundy around 1430
Wikipedia

So that the public illiterate in the past could easily identify the saints they represented, the artists got into the habit of accompanying them with an accessory recalling an episode in their lives. A list of these attributes can be found on internet by clicking on the following link :
Les Essentiels website 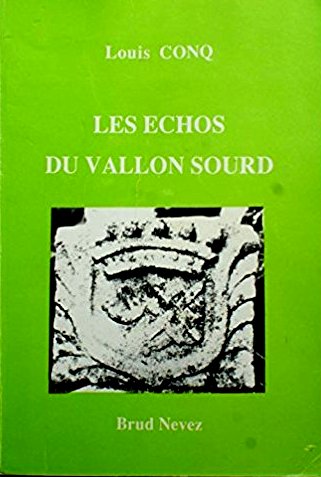 Thanks to Mr. Robert Tréguer, from Tréouergat, for his help and his loan of documents. 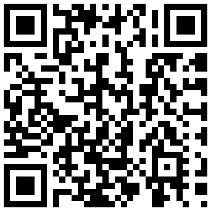