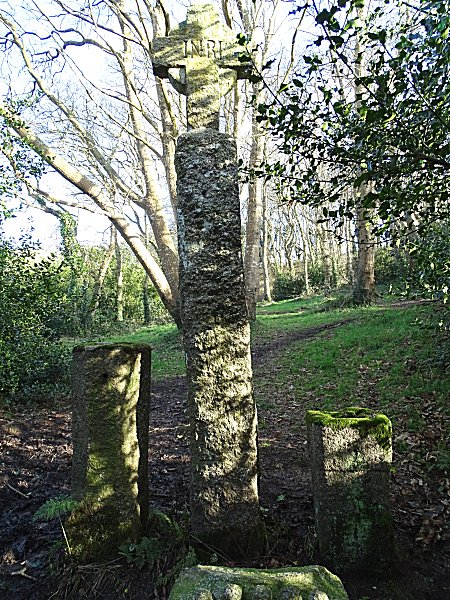 Access : The St-Ergat Fountain can be accessed by several ways:
- Continue the path that leads to the hermitage of St-Hervé ( visit of the hermitage ).
- Or take a signposted path from the D 103, between Tréouergat and Guipronvel.
- Or follow the route below which has a 1 km long access road, not muddy, as well as a vast parking space:
From the D168, between Lanrivoaré and Ploudalmézeau, and 1 km after the Lanrivoaré exit, turn right towards Tréouergat. Then turn right again 1 km further in the direction of Milizac. Drive 1.8 km and stop on the right side of the road on a large parking space. Follow on foot the hollow path that opens on the other side of the road. 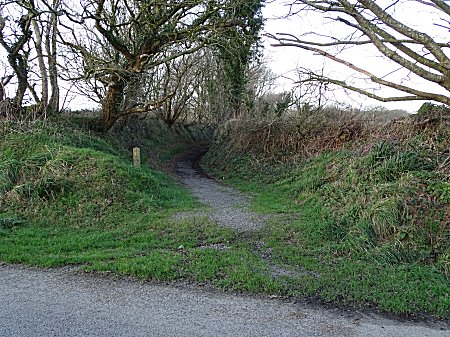 Entrance of the hollow path from the road to Milizac

On this road, 400 m from the road, turn right (on the left the road leads to the hermitage of St Hervé), then 100 m further take the path that goes down on the left. Bordering a magnificent landscape, it will lead you to the Saint-Ergat fountain located 500 m away in a wood, near a picnic table. 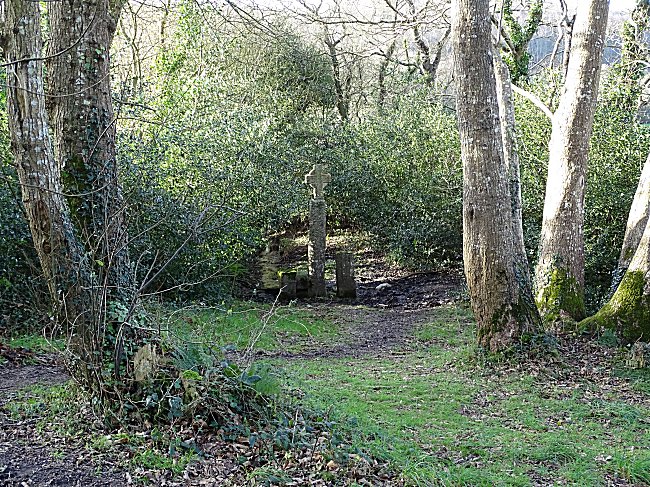 One does not immediately see the fountain which hides behind the 3 columns. Be carefull, it is a source and its periphery is particularly muddy and slippery.

An old legend: ( read the text from the image below ) 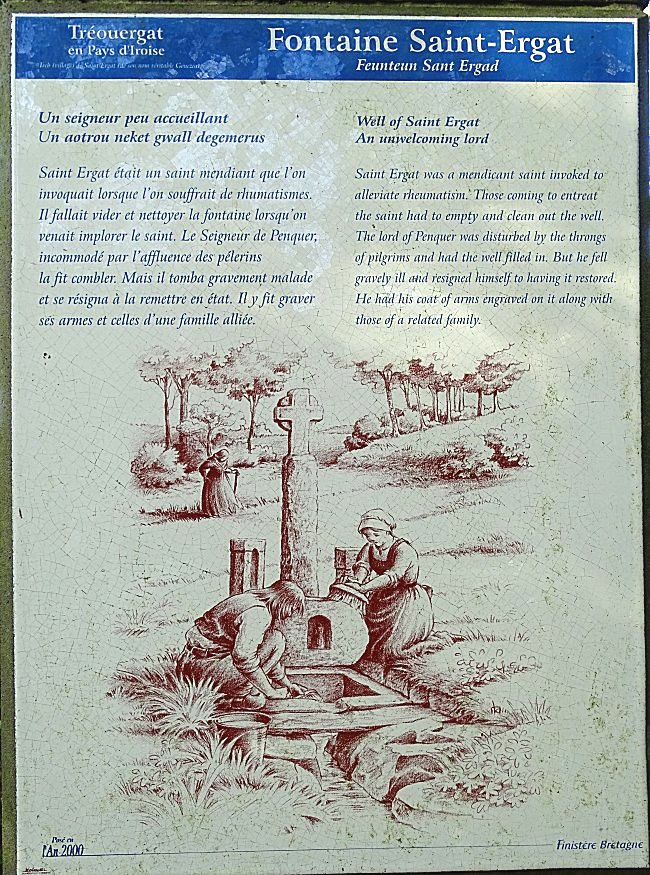 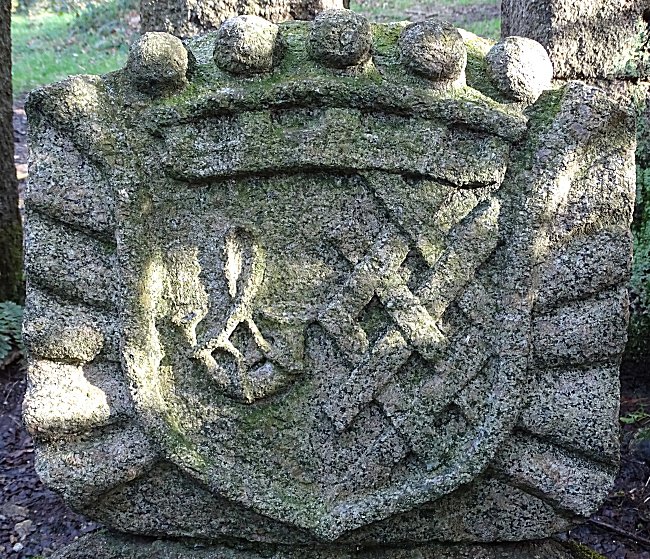 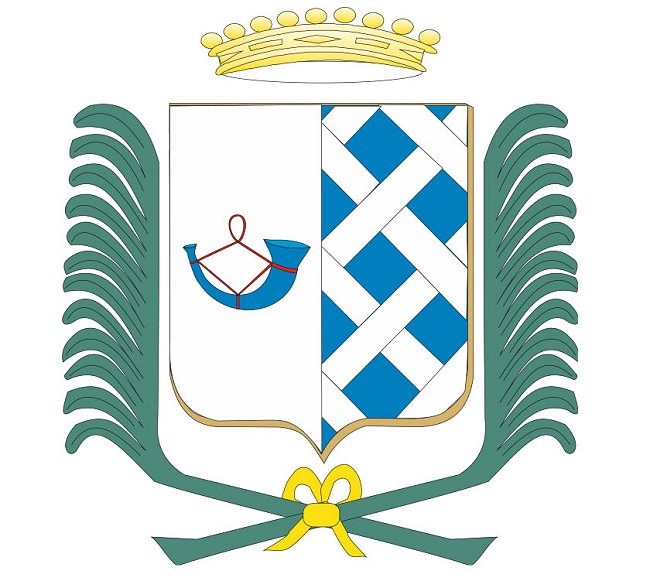 Interpretation and drawing by Michel Mauguin 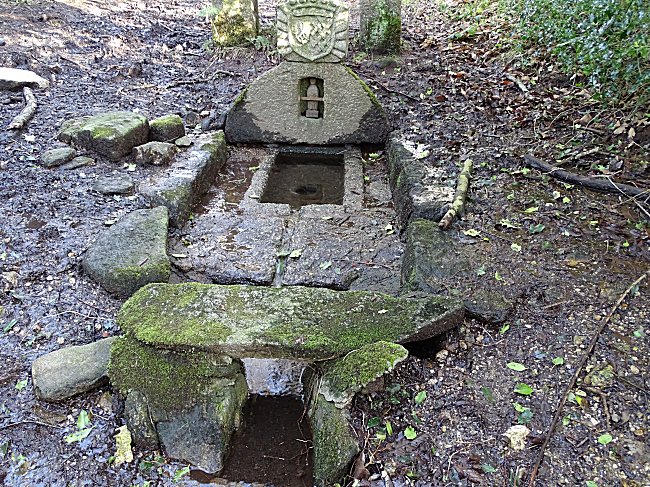 Located at mid-slope, the spring gushes naturally inside the basin through its central orifice and the water from the overflow falls from the gutter into the stone gutter. A tile allows the containers to be placed in order to fill them at this waterfall without having to dip them in the basin. The gutter then flows into a large reservoir once lined with stones. Louis Le Guennec, in his book quoted below, specifies " The practice is to empty the basin and sweep the fountain of the saint when we go to implore him ". This measure of hygiene shows how, long before Pasteur's discoveries, people were already wary of crumbling water miasmas. But one also meets this rite around other fountains or sacred places as in Porspoder where it was necessary to sweep the threshold of the chapel. Symbol of purity, it is in fact an ancient tradition, analogous, before Christianity, to the obligation made to priestesses to sweep away the ancient temples for which they were responsible.
Note the niche in which a statuette represents the holy healer of rheumatism. To respect tradition, the patient had to clean the fountain with a broom of broom branches. 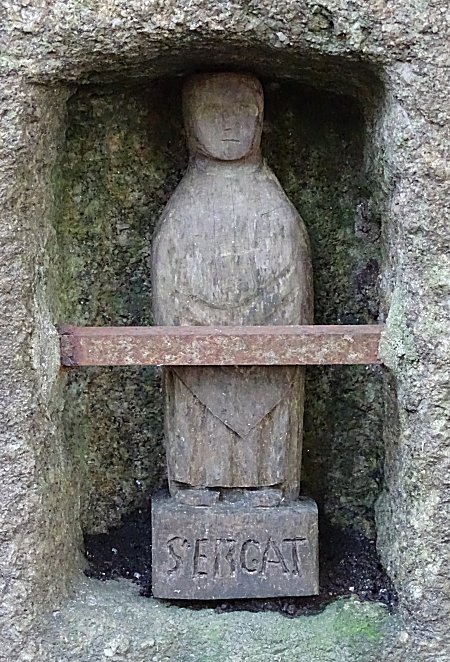 The three columns are reused Gallic stelae ( see explanations on this site ). A Celtic cross engraved INRI ( the titulus crucis "Jesus of Nazareth, King of the Jews") was erected on the central stele. It can be assumed that the other two stelae may have depicted thieves.