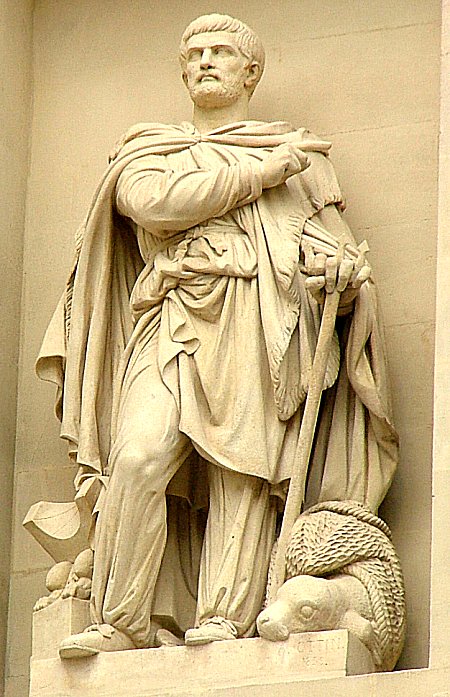 Pytheas by Auguste Ottin, 1859, Palais de la Bourse, Marseille.
(At his feet, a seal evokes the name of Phocea, Phokaya in Greek)

The existence of Celtic peoples at the headland of Armorica is attested by Julius Caesar in his conqueror report The War of Gauls. But before that, the most compelling evidence we have about the Osisms, Venetos or Coriosolites is that of Pytheas who lived three centuries earlier.
Who was this Pythéas ? A Massaliote, we would say these days an inhabitant of Marseilles. Pytheas massiliensis could be read in the texts erain according to the testimony of Eratosthenes, who was responsible for the Library of Alexandria, and Hipparque, one of the largest ancient Greek astronomers.
Pytheas lived in Marseilles ( the Grecian-Phoenician town of Massalia ) 4th century BC and was recognized from his time not only as an intrepid navigator, but also as a an excellent mathematician and astronomer. He determined, thanks to the shadows of a gnomon1 the latitude of Marseilles at a time when nothing was known yet about the coordinates of other Mediterranean cities. He accurately calculated the ecliptic's obliquity2 and deduced that on the summer solstice, at the polar circle, the sun was no longer to disappear behind the horizon.
Leaving the shores of Lacydon, the ancient name of the Old port, around 320 BC, his expedition beyond the Columns of Hercules ( the Strait of Gibraltar ) was to allow him to go and check his calculations by reaching the desired latitude and also finding the way which would facilitate the importation of tin, amber and other products from the northern regions. Tin that Marseilles, Rome and Athens needed to make weapons and bronze tools was found in large quantities in British Cornwall but also in Armorica. He was therefore driven by the spirit of research and adventure as much as his crew had, without doubt, in the heart and mind the fabulous epic of the Argonauts. 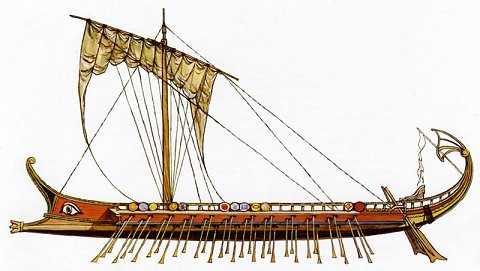 What types of ships and how many of them were armed for this adventurous expedition ? Some archaeologists and writers believe he was running one or two triremes, others for a ship carrying a maximum of a hundred sailors. At the time, the Carthaginians controlled navigation in the western Mediterranean and prevented Greek and Roman ships from crossing the strait opening towards the Atlantic. Would Pytheas have succeed in deceiving the vigilance of Carthaginians ? Or did he cross south of Gaul with horses, weapons and luggage to board in the Namnets at the mouth of the Loire? Still, he recognized several Armorica capes, including the one he named Kabayon and which is none other than the headland of Penmarc'h. The Romans renamed it Caput caballi ( from Latin caput = head or chief, and caballus = horse ). Later, Britons from across the Channel naturally translated this name by Pen Marc'h ( Horse's head ) then the writers and historians of a Brittany that has become French in the 16th century renamed it in Cap Caval.
After the headland of Penmarc'h, the Navigator discovered the region of Le Conquet and the abers as well as islands including the one he named Ouxisamé and that was probably Ushant. In 1959 was discovered in Lampaul-Ploudalmézeau, in the cleats of a laminar seaweed, a Cyrene's golden stater, called since then by numismatists and hellenists the Pytheas's stater. The serie of which this gold coin was part, was minted between 322 and 313 B.C., likely the time of the Pytheas expedition.4


The golden stater found in Lampaul-Ploudalmézeau
and deposited at the Museum of Brittany in Rennes
Photo : Prehistory Museum of Penmarc'h ( Finistère) 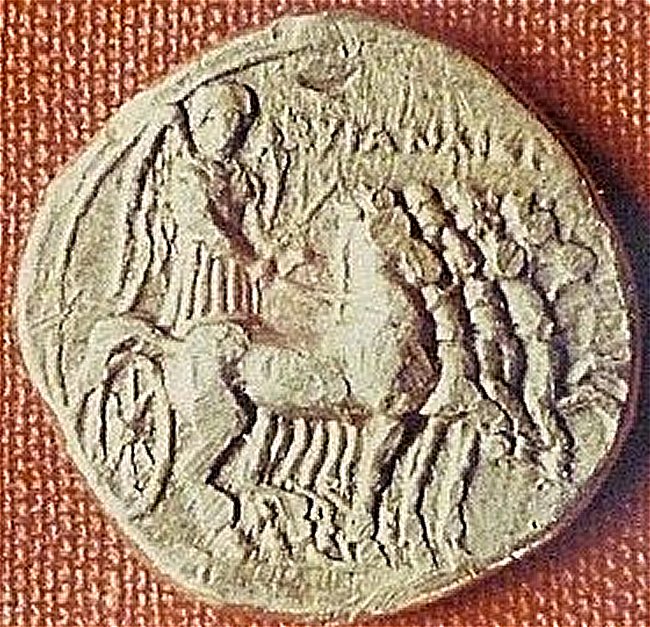 On a face : a quadrige led by the winged goddess Nike, the Samothrace's Victory, and the Name in Greek of the Cyreneans. 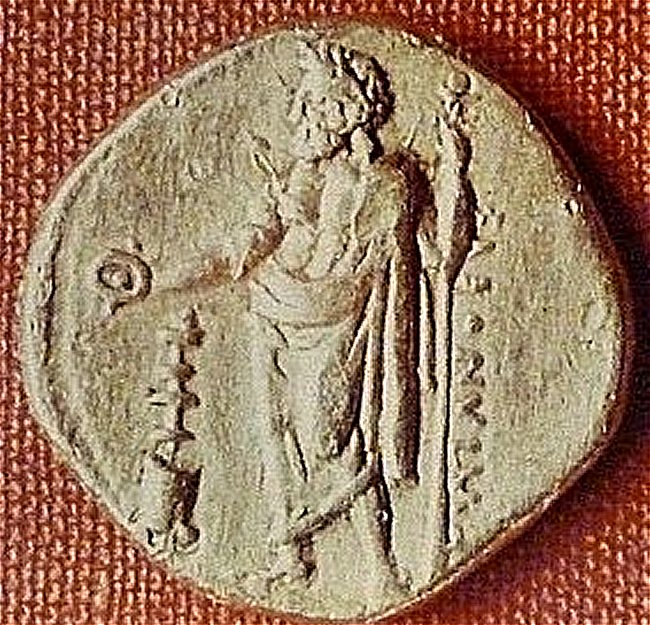 Back : Zeus of Cyrene ( Zeus-Ammon ) making a libation
and the name of Polianthes, monetary magistrate of Cyrene in -322.


The Massaliotes then headed for the Cassiterids5. The navigator also mentions more to the east an island than the natives had named Victis, perhaps the Isle of Wight, and an area on the shores called Kantion, an approximate name still carried by the county of Kent. Making numerous stops, he finally recognized by observations and deductions the triangular shape of this land to which he gave the name of Prettanike or Brettanike, the land of the Brittons. The locals, he writes, are simple people who live frugally in shacks reeds and wood. And he adds : They are good warriors who fight on chariots like the heroes of the Trojan War.
He does not forget to point out the phenomenon of tides, especially those he will discover on the shores of Scotland and Cape Orkas ( Orkney ) and he compare them to the much weaker tides of the Mediterranean.
The rest of his journey will take the navigator to Thath or Thule, six days' sailing from Brittany ( Great Britain ), heading north, specified Strabon and Pliny in quoting him. What was Thulé ? The Shetlands islands ? The Faroes ? Iceland ? Or all these regions including the Norwegian coast ? During a long time Thulé has been the extreme northern limit of the known world : the Ultima Thule. Even today, in Gaelic, the Celtic language of Ireland, Tuath or Toua is used to designate the extreme north. 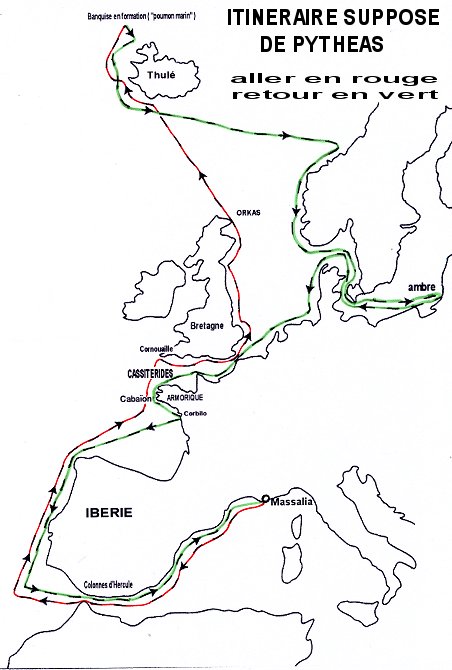 Based on Le voyage de Pythéas 300 ans avant J.C., in Cap Caval Magazine No. 24
Some historians believe that the return from Iceland took place not along the Scandinavian coast
but between the British Isles before the exploration of the Baltic Sea

The Barbarians showed us the horizon where the sun disappears to regain its bed, said Pytheas, referring to the winters nights, as well as reported by the copyist Geminus of Rhodes in the first century B.C.. Much later, Cosmas of Alexandria reports : Pytheas says that having arrived in the far north, the natives indicated him the place that was for them the point of the long nights origin.
When the navigator declares that the frigid sea ( the frozen sea as Pliny translated it ) is just one day away from Thule's navigation, it's probably from Iceland and the sea ice that starts north of this island he wants to talk about, and what he called the sea lung was to be the pack ice being formed that he compared to shoals of jellyfishes.
After crossing the Artic Circle, Pytheas returned to South and entered the Baltic Sea. In front of Scythia ( the land of the Scythians or the north of Europe ), Pliny explains, he approached an island where the sea rejected amber in abundance on the beaches. It must be the island that today is called Samland, in the vicinity of Kaliningrad. Strabon did not admit that Pythéas could have recognized so many new lands and especially the shores of the Baltic. No one has yet surpassed the mouth of the Elbe, he said in one of his writtens, not even the Romans. Historian Claude Nicolet points out that, under Augustus, the Roman fleet reached the headland of the Cimbres ( the Point of Jutland ), but then had to turn back. A pious omission on the part of Strabon, rather than ignorance, says the historian.
The story of Pytheas has moving shortcomings writed the poet from Marseilles Louis Brauquier. One can imagine all kinds of endings in his journey. Has Marseilles been ungrateful to her hero ? Has the city organized expeditions for new discoveries ? Silence was made for many centuries on Pytheas whose writings had disappeared, and then the Italian Renaissance rediscovered Strabon and, through him, the exploits of the first polar explorer in history. In our time, all navigators, astronomers, historians and geographers around the world now recognize the immense value of this great sailor. But we'll settle for to add that Pytheas of Marseilles, whoever Winston Churchill hailed in his book The birth of Britain as one of the greatest explorers in the history, has indeed recognized the ribs of our beautiful region we love and we name Finistère.

Even today, after 23 centuries, Marseilles has not forgotten Pytheas. A college and a street parallel to the Cannebière bear his name, a statue and a stele are dedicated to him while the recent Museum History of the City, built on the site of the ancient port, evokes the famous massaliote navigator. 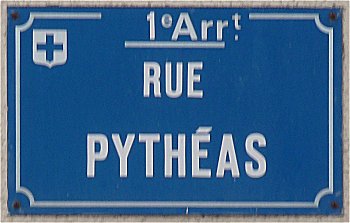 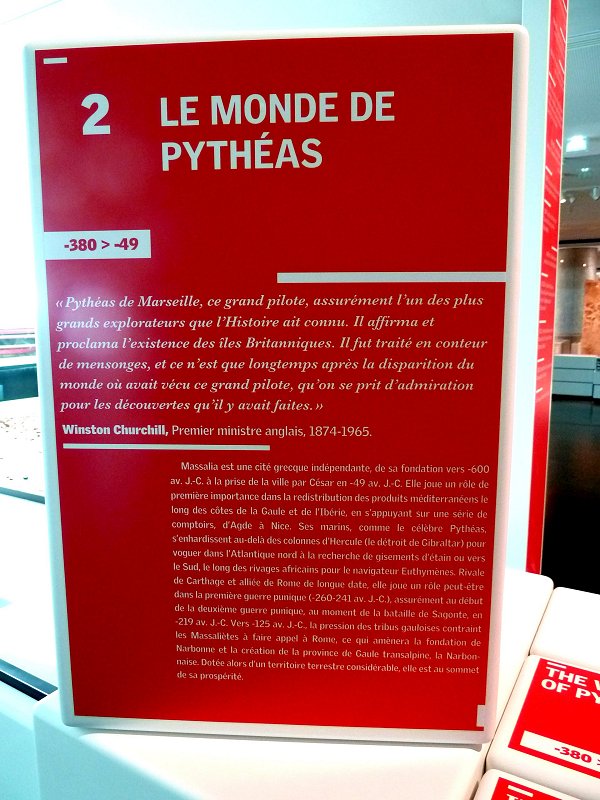 -1- The gnomon consisted of a vertical or parallel stem to the axis of the poles, fixed on a flat surface. It was used, among other things, to measure heights of the sun and mark the time.

-2- The ecliptic is the plane in which the Earth moves through space. The Earth's rotationaxis is 23°26 tilted compared to this plan.

-3- Read the incredible tribulations of this currency on our page The Golden Stater says of Pytheas. 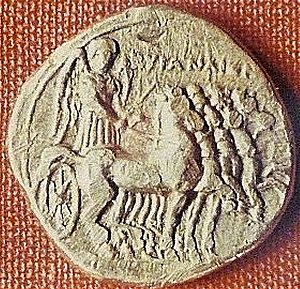 -4- Read the detailed report of this interesting discovery published by Jean Bousquet, Regional Director of Historical Antiquities, in 1961 in the Annales de Bretagne, 68, 68-1, pp.25-39. The author deduces from this that one of Pytheas' vessels could have sinked not far from Lampaul-Ploudalmézeau, being no more than 30 m deep.
That same year, J.B. Colbert de Beaulieu, numismate, and P.R. Giot, prehistorian, have published an article about this protohistoric discovery in the Bulletin de la Société Préhistorique de France, Vol.58, No.5-6, pp.324-331.Article

-5- The Cassitérides was the name to designate the Sorlingues ( Scilly Islands ) and British Cornwall where cassiterite, tin ore, was extracted, as in Iroise country in St-Renan.


In 1961, the Academy of Inscriptions and Beautiful Letters published in the following report of its 1960 sessions: 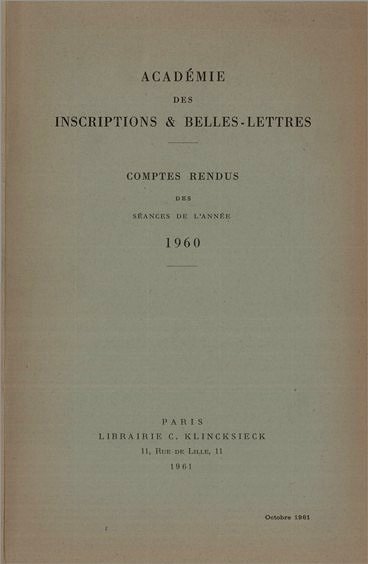 
In March 1961, the Annals of Brittany published
the discovery of the Lampaul-Ploudalmézeau stater 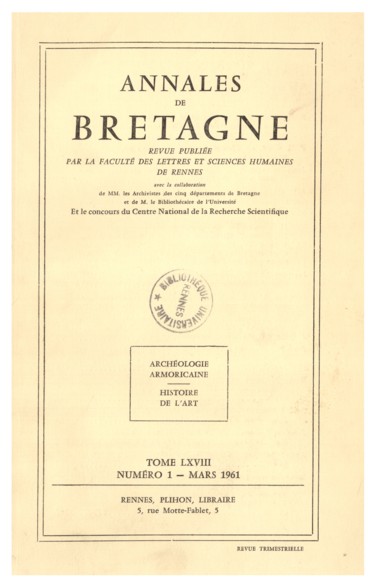 
Despite the discovery of the Golden Stater, Pytheas' journey still suffers from Strabon's criticisms and is still unknown. While proposing different routes, many authors have tried to rehabilitate the memory of the Massaliote navigator. 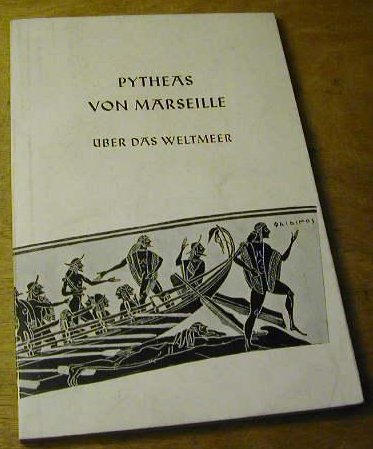 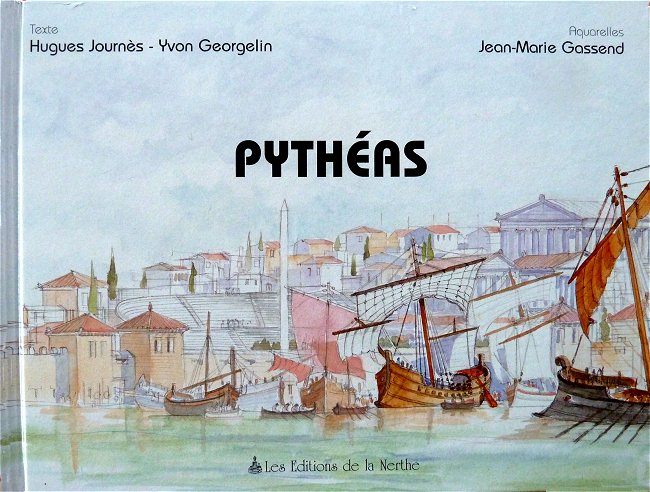 An exceptional bound work, abundantly illustrated with wonderful watercolours, which completely rehabilitates the Marseille navigator thanks to very detailed scientific explanations.
We only regret that this book, which is currently sold out, has never been reissued.
To seize if by happiness you find it used. 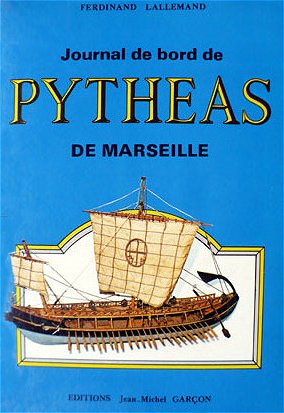 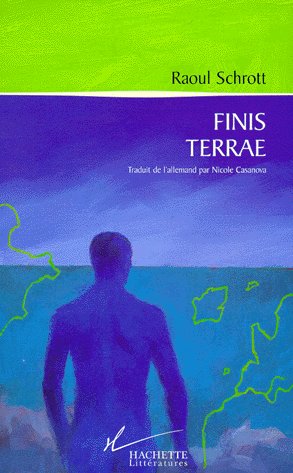 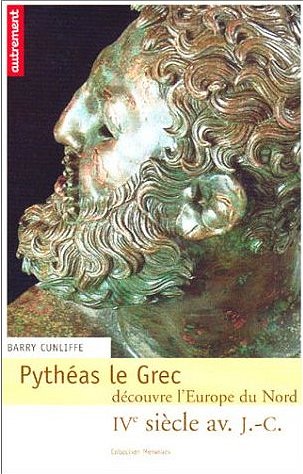 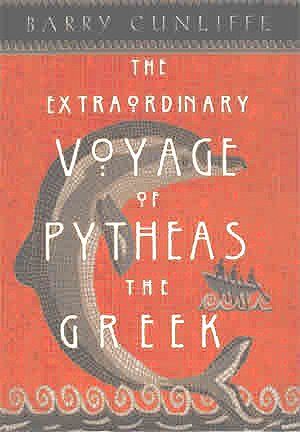 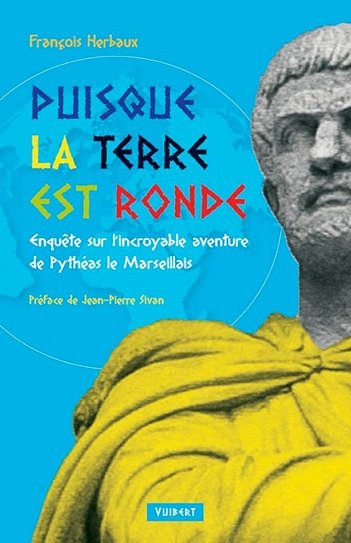 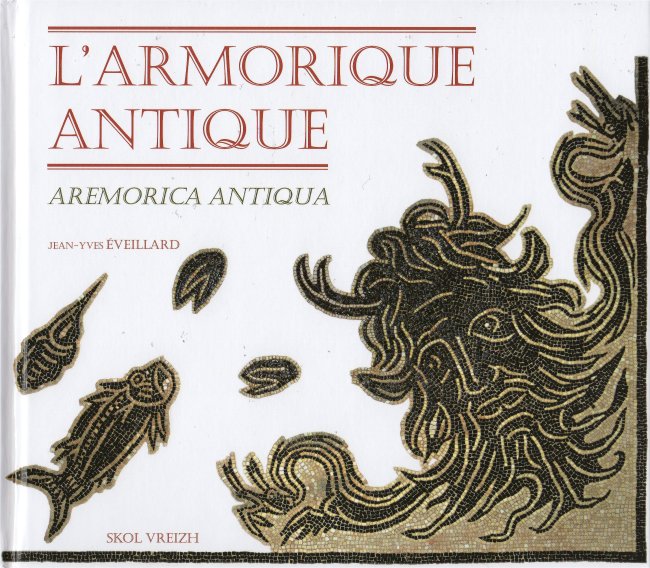 On the internet, see the site :
http://marseille-pytheas.eu/index.html 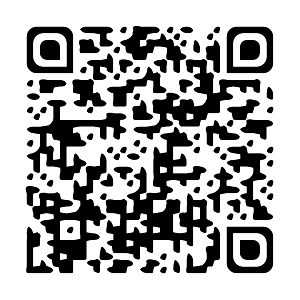