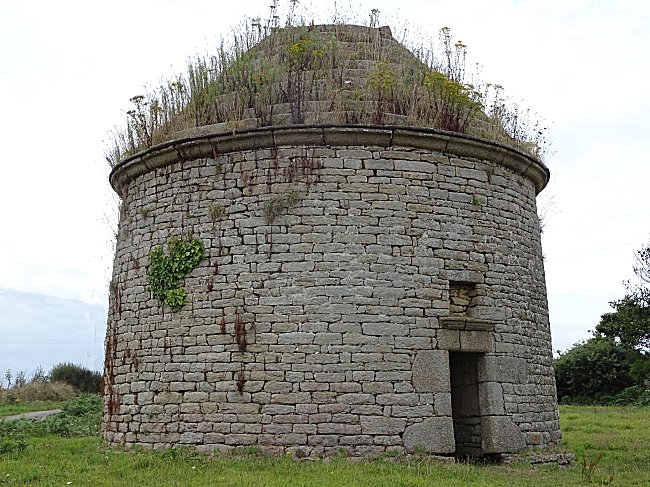 This building is located in a private property. It is signposted and open to the public. An explanatory panel has also been installed by the Community of Municipalities, with the assistance of the Tre Arzh association of Plouarzel. It allows visitors to understand the architecture and the importance of this type of construction, which dates from the old regime and is often seen in ruins and abandoned to vegetation in many municipalities. 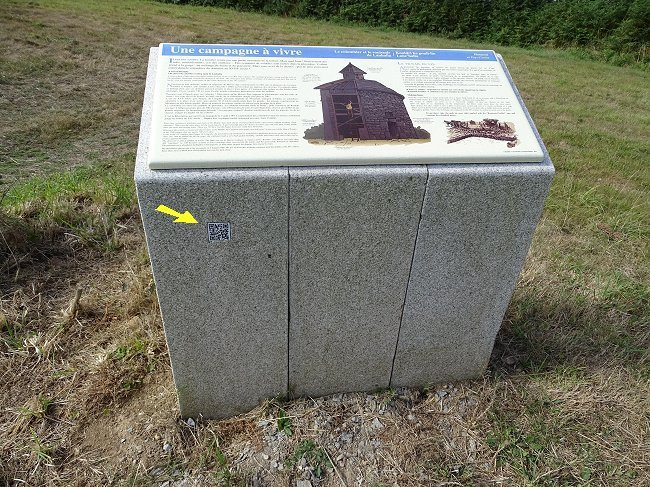 Design: Com1nom@de and Jézéquel Publicité 2015
There is a QR code on the vertical side of the terminal (arrow).
Scanned by a smartphone or tablet, it gives access to sound explanations.

Access : From Plouarzel, follow the D28 road towards Brélès. 3.5 km from the village, turn right (direction signposted Lanhalla). Go past the dovecote that you see on the left and park along the wide path that leads to the retting basin on right.

If these two terms are commonly used, it must be known that the word dove designates no particular species of pigeon. Dovecote used to be a vernacular word that designated a building used for pigeons breeding in general. Then, in the XIXth century, the word dove, like the biblical bird, was gradually used to designate white pigeons. A release of doves contains only white birds. Since then, the word pigeon loft has replaced that of dovecote, which has become too restrictive. But it is well the term of dovecote which was used at the time of its use. It is also its name in Breton (koulm = dove).

This dovecote, therefore, dates from the end of the XVIth century. It was built by Tanguy de Langalla, powerful lord of the neighbouring manor, in order to breed pigeons 1. In the past, these birds and their eggs were widely consumed in the meals of noble families and the possession of an important dovecote was also an ostentatious sign of wealth for its owner. This privilege, exclusively reserved for the nobility, was abolished in France on August 4, 1789. 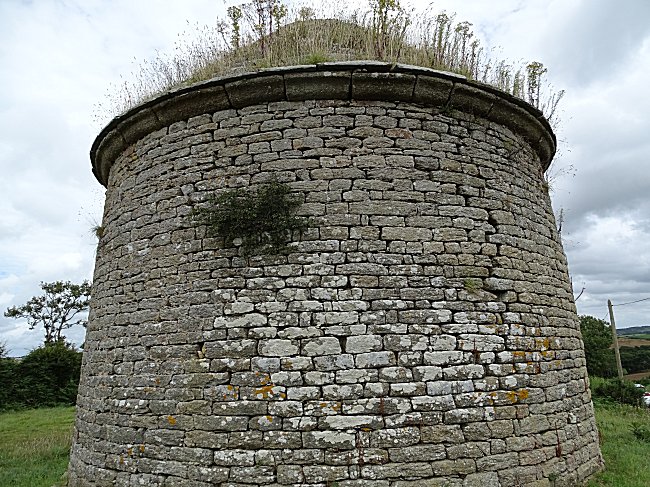 Lanhalla's dovecote, the 'Kouldry', is a solid, almost cylindrical construction that deserves close examination. Its exterior wall is made of large granite stones. It rests on the ground without foundations and we note that it is not exactly vertical, but leans a little inwards. This voluntary inclination, which the the French architects call 'fruit', aims to counterbalance the enormous thrust exerted by the heavy slate roof. Behind an elegant cornice, adorned today with wild grasses that grow on the excrement left by generations of pigeons, this stepped roof is formed of 10 successive layers of large slabs placed in corbelling and slightly inclined outwards.

A single opening gives access to the inside. One is surprised by the unusual size as well as by the thickness of the blocks which frame it and which contrast with the quite regular stones of the wall. Obviously, this entrance defended a treasure, like a vault. Imagine the thickness of the door framed by this enormous embrasure. 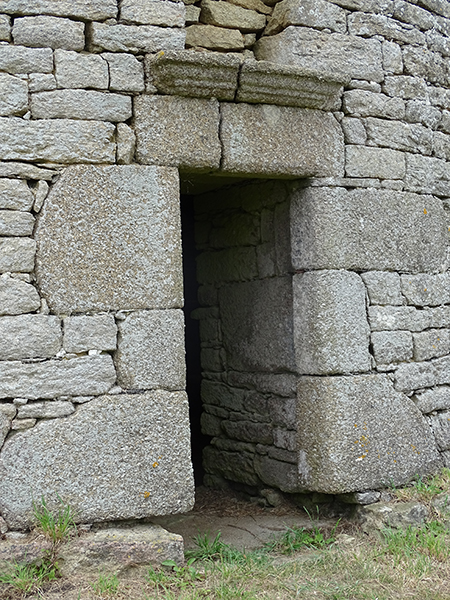 Above the lintel and a decorative cornice, a degraded niche suggests the location of a lord's coat of arms on a carved stone that was stolen a few years ago. It was those of Tanguy de Langalla who emblazoned rhombus patterns of silver and sand with a divided band charged with four ermines of sand. 2 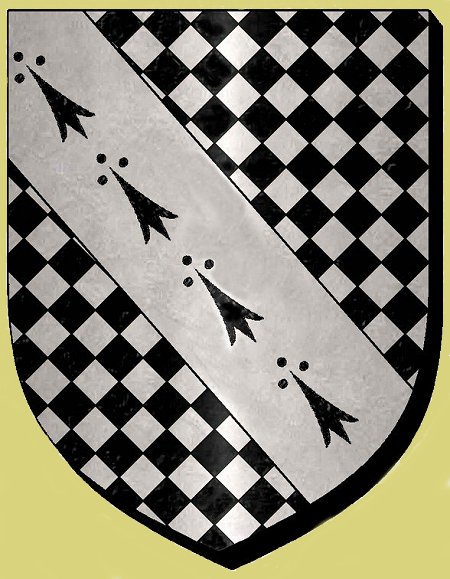 As you enter the building, you realize how complex the construction is. We can't find the wall we saw outside. It is indeed hidden and nested in a second wall intended to house the couples of pigeons. A regular arrangement of thin slabs of schist supporting rectangular paving stones creates hundreds of niches called 'boulins', while overflowing cornices allow the birds to land and constitute an obstacle to weasels, martens and other small carnivores likely to climb up to the nests. We will see further that these cornices still had another utility.
If one slips one's hand into a 'boulin', one realizes that it gives access to a small inner chamber about forty centimetres deep, rather vast, which extends behind the paving stones separating the entrances. 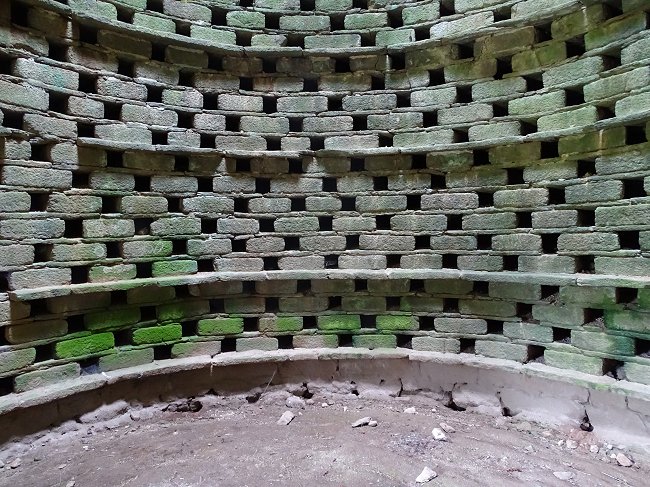 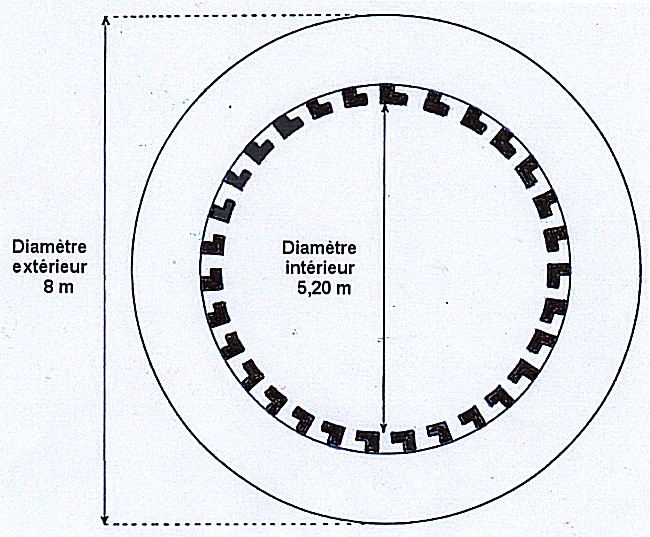 Approximate section of a complete row of 'boulins' of the 3nd, 4th and 5th groups.
Closer to the ground, the rows of the 1st and 2nd groups are incomplete because of the opening of the entrance and its lintel.
Note the imposing thickness of the exterior wall compared to the overall construction. 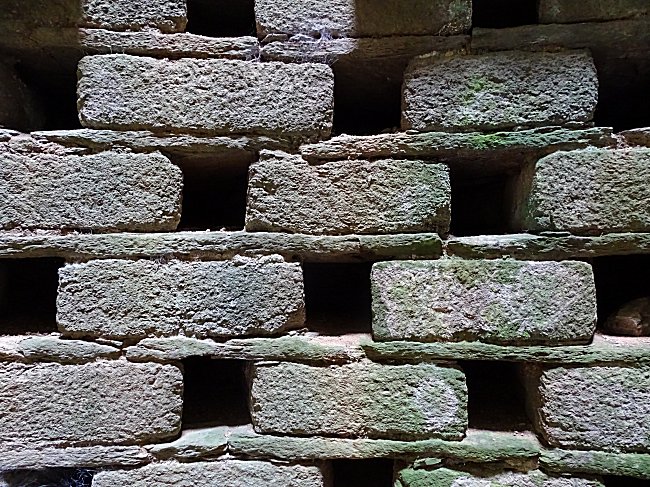 Looking up, you can see how the dome of the dovecote was corbelled, a challenge to gravity. Long slabs, with only the corbelled end visible, were fitted layer by layer. But if on the outside there were about ten, we see that inside their number doubled. The structure of the dome is therefore complex. The weight of each upper crown holds the crown placed below. This very old technique, used in some outbuildings of farms in the south of France, has the advantage of not requiring, during its construction, the use of a wooden scaffolding to support the dome temporarily. At the top, there was a large oculus through which birds could escape for food. 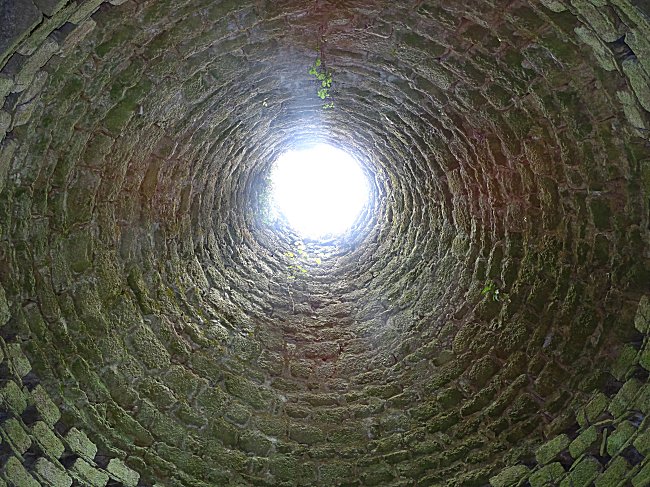 However, as can be seen in other constructions of this type, a little wooden lantern, probably similar to the one on the interpretation panel, covered the oculus to prevent rain from reaching the interior. 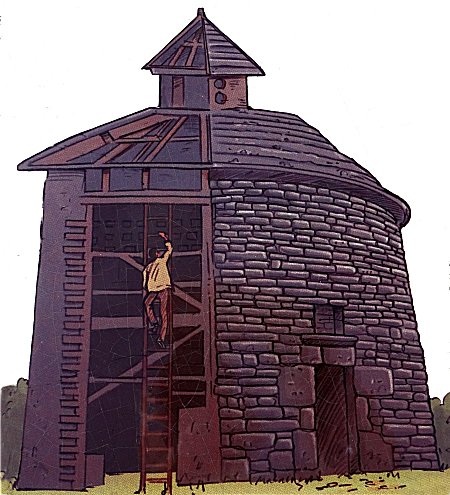 Assumed reconstruction of the building and stripped-down representation of its inside.
The ladder system and the wooden lantern have disappeared.
Design: Com1nom@de and Jézéquel Publicité 2015

Today totally empty, the building had to include at least a ladder to go up and seize the birds and their eggs as needed.
Let's look at the dirt floor: it's not flat. Higher in the center than near the wall, it presents circular concentric furrows. These are the traces of the feet of this ladder that are still visible despite the centuries. Spaced about 90 cm apart, they make us imagine an equipment of imposing size pivoting around a central axis. 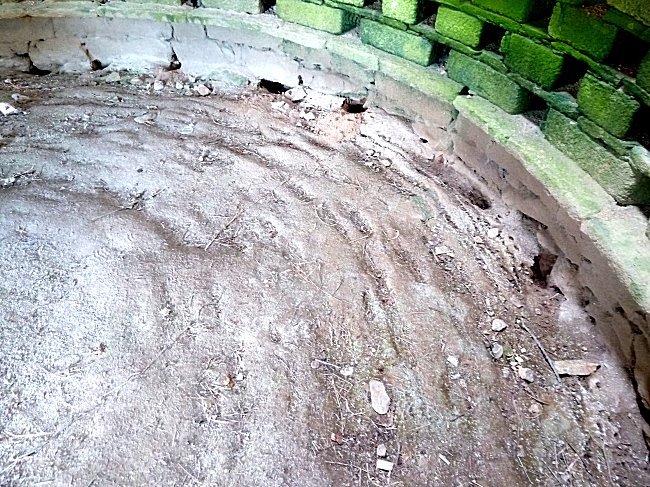 It was concluded that the lantern was attached to a large central pole planted in the ground and provided with a pivoting rod to which the ladder was attached. This ingenious system made it easy to visit all the nests without descending the ladder, which was simply moved forward by leaning on the side ledges.
A water supply was also to be placed at the foot of the pole so that the birds could drink when they were locked up.
In fact, the farmers in the area did not like to see the pigeons pick their crops. At the time of sowing, birds were usually locked up for a few days. The lantern thus had shutters that were folded down by means of a long rope in order to close the oculus.


We see that this construction, which seemed by far a rather analogous to an old mill, is much more elaborate than it seems. It is not the work of local craftsmen, but good professionals who put their knowledge at the service of seigneuries.
What should we do today with these interesting remains that will inevitably fall into ruins over time? Most of the dovecotes that can still be seen are used as outbuildings, pigsties or equipment stores on farms and have not been restored. The outer wall of this one is already cracking. However, as we can see, a dovecote is a small wonder of architecture and an important witness of the customs of the old times that it would be a pity to forget. And if Lanhalla's has been judiciously highlighted, there are many more that deserve to be studied and preserved.

-1- It is also not impossible that some pigeons were used as carrier pigeons to transmit messages. We know that this communication technique goes back very far in history since, in ancient Greece, the results of the Olympic Games were transmitted off in this way. In the XVIth century, this means of communication was already well known.

-2- If you too, want to emblazon, read the page of this site devoted to the sundial of Plourin.

-3- This calculation is very approximate: the 'arpent' ( 4221 m2) is a measure of the Paris region while in the west of France the 'journal' ( about 5000 m2) was commonly used. Since 1 boulin corresponded to 1 arpent of land, it was sufficient for the purchaser of an estate to count the number of boulins in the pigeon house to know its surface area. But the seller could have fraudulently built new boulins, or sold part of the estate without modifying the pigeon house. And the purchaser was thus pigeonholed. This is the origin of the expression.
The arpent and the log, not quite equivalent, theoretically corresponded to the area ploughed in one day. But how ploughed? If horses were used, one ploughed faster than with oxen, thus more surface. And at what depth? In what kind of soil? In summer when the days are longer or in winter when they are shorter? And that only applies to arable land. The seigneurial domain also included woods, orchards and meadows. We can see that these old measurements were really approximate. 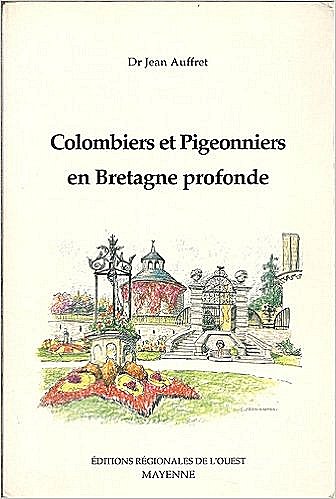 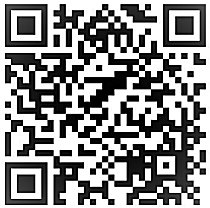