Only visible from a distance 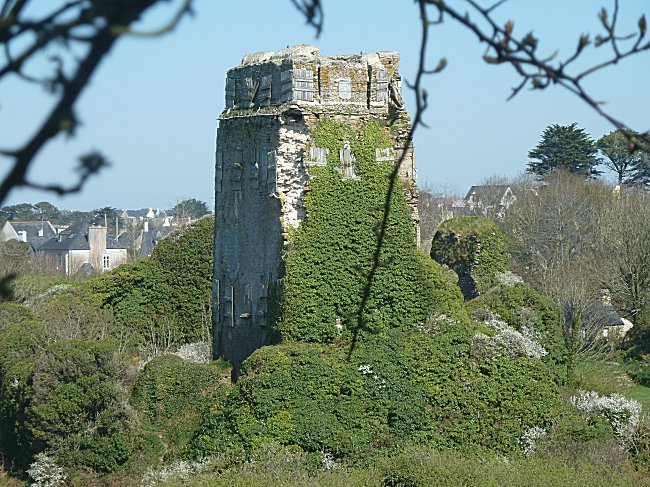 From St-Renan, head towards Argenton on the D68 road and, facing the sea, turn right. Continue north and 1.5 km further, turn left and take the tourist road. It runs along 5 km of the magnificent Landunvez coast. After the large final car park, always follow this road lined with houses until the pretty beach of Trémazan whose access is partially blocked since the last war by an anti-tank wall. Park opposite, to the right of the road. From there, the castle keep can be seen in the distance.
The ruins are in such an abandoned state that, for security reasons, their access is not allowed. But it is possible to see more closely the dungeon and the dovecote by continuing on foot towards Kersaint and by taking the first small road on the right. 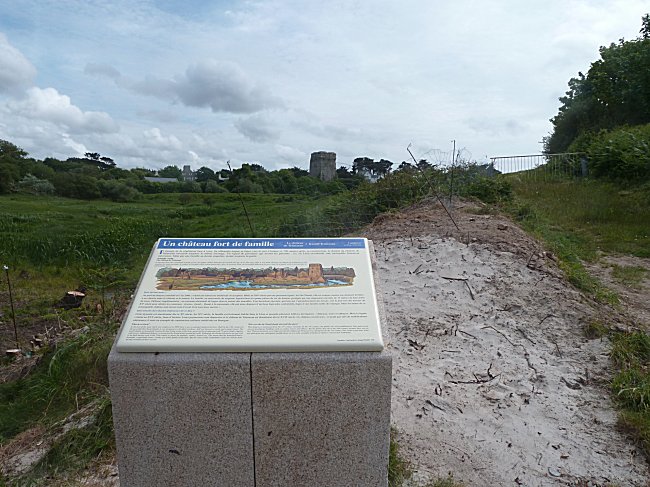 The Community of Municipalities has installed an illustrated
explanatory panel just near the car park.

The large square dungeon is that of an old castle now in ruins. Attached east of the dungeon, dwellings led to two round towers. This first housing complex was bordered by a deep moat. Further east stood an advanced structure: a square courtyard surrounded by curtain walls and with towers at its corners. These two fortified complexes were to be joined by a wooden footbridge launched over the impressively deep moat. Access was by a road leading to a drawbridge to the northwest from the shore. 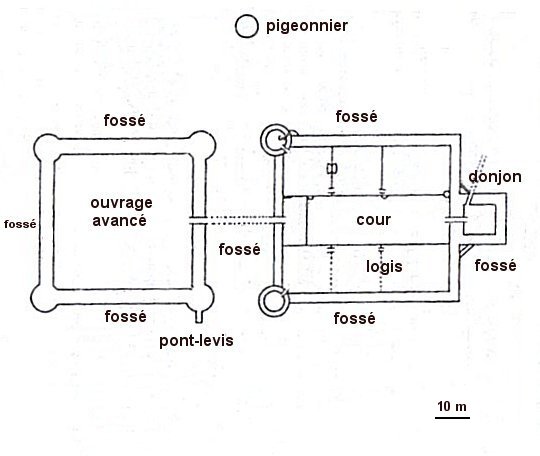 Approximate plan established by Alain FERRAND :
"The castle of Trémazan", 1905.
This archaeologist is the author of personal excavations carried out on the site in 1904. 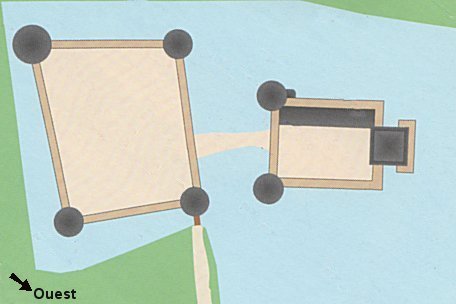 Plan established in 2001 by the association 'SOS Château de Trémazan'
who conducted a careful study of ruins, a model of the castle
and a series of panels exposed to the House of Canons in Kersaint.

Attention, the orientation of the plans is that of the landscape
seen from the explanatory terminal.

We are used to seeing castles perched on the heights, but this is not the case here. The fortress was built in a marshy valley, now cut off from the ocean by a dune over which the road passes. 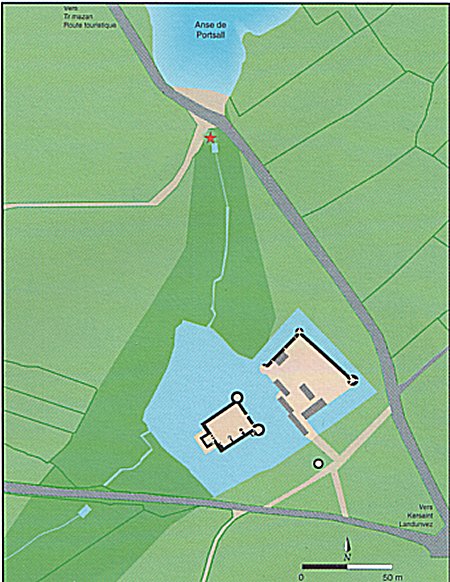 But you only have to look at Trémazan Beach, where the sea retreats far away at low tide, to understand that the sand of Portsall Creek, driven by wind and currents, is quickly accumulating at this point. We can therefore think that the landscape has changed considerably since the beginning of the Middle Ages. Situated in a ria, the moats of the castle were probably connected to the sea when they were dug. The location of the castle should allow its occupants to intervene quickly in case of danger from the ocean. And we obviously think of the authors of maritime raids, but also of piracy. The fortress was quite invisible from the sea but one could easily watch all the coast from the top of its 25m keep. The gradual filling of Portsall Creek and the formation of the dune must have contributed to the abandonment of the castle.

The first mention of a 'palace' in Tremazan appears in the report of a legend by Brother Albert the Great, chronicler of the XVIIth century, in "Vie des saincts de la Bretaigne armorique" Nantes 1637.
This chronicle tells the tragic legend, in the year 525, of Saint Tanguy, son of Lord Golon de Trémazan. You can read about it on this site on the page Fontaine Sainte Haude. The owners of the castle bearing the name "Du Chastel" always claimed this ancestry. However, there is currently no evidence there of the presence of a first feudal construction on the site of the castle.

Construction and extension of the castle

The date of construction of the stone keep, which may have succeeded a wooden tower from the first centuries of the Middle Ages, is unknown. We only know that the castle was destroyed in 1220, and was rebuilt by Bernard du Chastel when he returned from crusade, around 1250. According to the archaeologist Alain Ferrand, the dungeon would only have known repairs. But dendrochronology studies1 have nevertheless attributed to its beams an even more recent date: the end of the XIVth century! Obviously our knowledge is too imprecise on this medieval castle which owes especially to its geographical isolation and to the recent consolidation of its ruins to have been so long preserved. 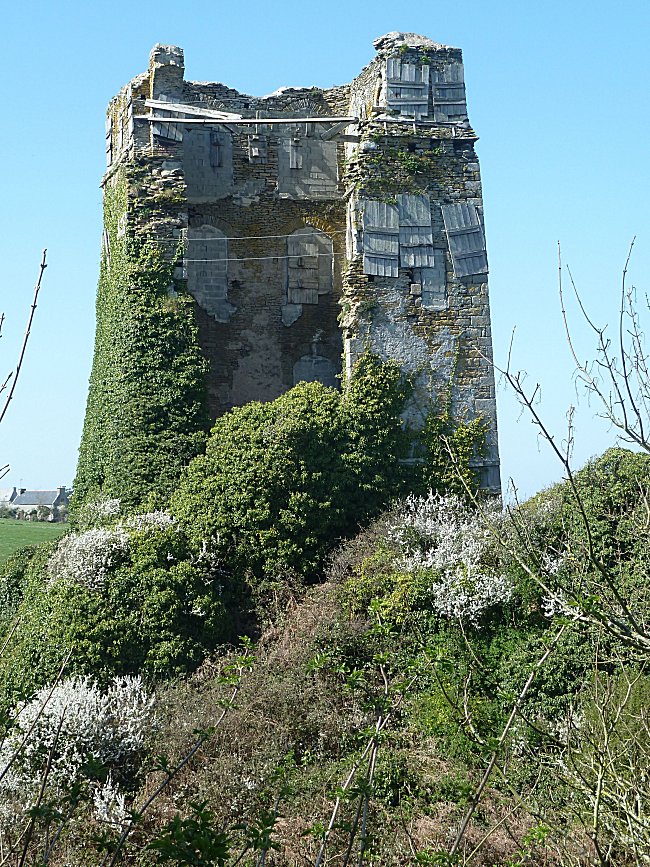 Several works of fortifications no doubt phased from the XIIIth to the XIVth century followed the construction of the dungeon: first of all the first enclosure and the dwellings leaned against the curtain wall about 15m high and 2.80m wide. The defense is ensured by machicolations built all along the round path, by two large towers, 20 m high and 10 m wide, as well as by the keep remained outside. The ditches were dug then, in the XVth century, the enormous courtyard was built totally distinct from the first work. It was intended to accommodate the population in case of emergency. Loopholes are set up to use guns. This impressive ensemble, with its wooden hoardings2 and slate-covered dwellings, affirmed the power of the lord owner. At that time, it was certainly one of the largest fortresses in France. 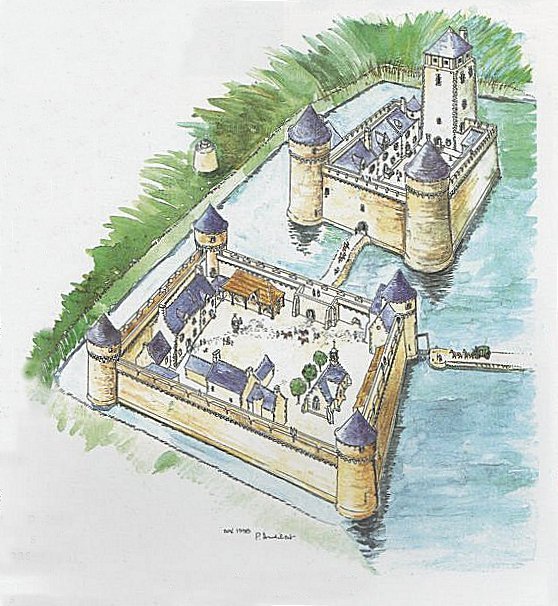 Masters of a territory comprising all the Bas-Léon to Brest, the lords of Du Chastel belonged indeed until the eighteenth century to the largest and most powerful seigneurial lineages of Brittany. Several of them distinguished themselves in the service of the King of France.
Guillaume II Du Chastel, winner of an English fleet in 1403 in front of cape Saint-Mathieu, was chamberlain to King Charles VI.
His brother Tanguy III du Chastel, a military valiant and provost of Paris, saved the 10 years old Dauphin, future Charles VII, during the revolt of the Cabochians in 1413. As one of the leaders of the Armagnac party, he took part in the assassination of Jean-sans-Peur (John the Fearless), the Duke of Burgundy, during Montereau's meeting in 1419.
His nephew William III of Chastel was appointed officer of the king's house. Valiant warrior, like Bertrand du Guesclin he enjoyed the privilege of being buried alongside the kings of France in the basilica of Saint-Denis.

His epitaph is as follows:

Transl.: "Here lies the noble man Guillaume Du Chastel of Lower Brittany, Pannetier of King Charles VII and squire of monseigneur le Dauphin, who died on July 23, the year of grace 1441, during the siege of Pontoise defending the passage of the river Oise, the day that the Duke of York crossed it to try breaking the siege, and pleased the king for his great valour and the services he had done him in many ways, and especially in defense of this city of Saint-Denis against the siege of the English, that he was buried here. Thank God for that. Amen."

Tanguy IV Du Chastel, brother of William III, succeeding his uncle Tanguy III, went in turn to the service of Charles VII, whose funeral expenses he personally paid in 1461. The Duke of Brittany François II, father of Anne of Brittany, appointed him Grand Master of his Hotel and captain of the city of Nantes. Tanguy IV was wounded to death during the siege of Bouchain (North) in an attempt to protect King Louis XI. The King had him buried in front of his future tomb in the basilica of Cléry Saint-André (Loiret) where they both lie today. 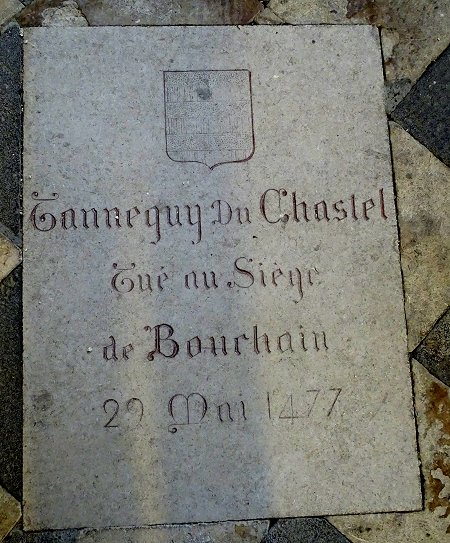 Several descendants have distinguished themselves among the following generations of the Du Chastel family, but in the french Royal Navy. A saying4 paid tribute to their bravery and they were called the "kings of Brest". Others were high ecclesiastical dignitaries.

The abandonment of the castle:

In the 17th century, the old fortress no longer met the residential needs of its owners or the defense of the region. It was simply abandoned by the Du Chastel family and a century later, only the Receiver General in charge of the administration of the seigneury lived there. A farm occupies the estate.
The ancestral castle became royal property and was already in poor condition when it was sold as a national asset during the Revolution. It was then totally deserted. It is probable that it was then used as a stone quarry, hence the state of its present dilapidation.
After 1890, the last inhabitant of the ruins was a beggar nicknamed Napoleon lodged by the mayor of the commune in the dovecote. He showed the ruins to the visitors. 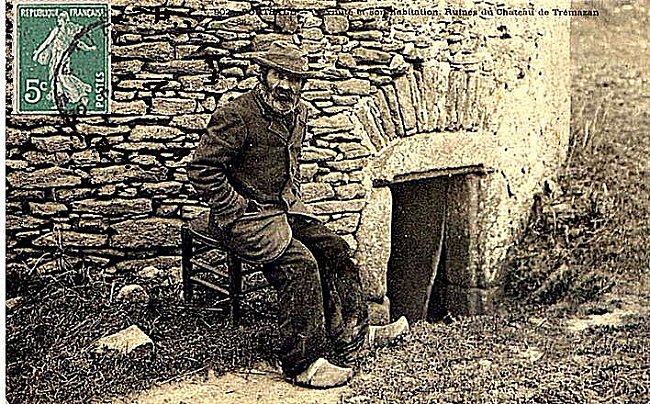 This dovecote is still visible from the small road along the northeast wall of the estate. We can't visit it. 5 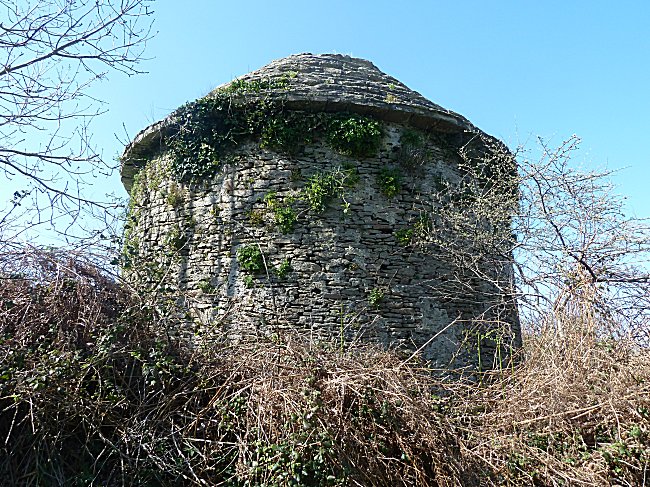 The "SOS Château de Trémazan" association has set itself the task of bringing this fortified complex, which was one of the most powerful in Brittany, out of oblivion. Thanks to its action, the ruins are very temporarily preserved from a general collapse by wooden structures and panels.


-1- Dendrochronology is a method of dating old pieces of wood. It is based on the study of concentric rings that can be distinguished on any cut trunk. These annual rings are more or less important, more or less spaced according to the climate of each year. By making comparisons with other well-dated wooden rings, it is possible to date new pieces of wood that will themselves be used for other dating.

-2- The hoardings were covered galleries running around the perimeter wall and overlooking the outer foot of the walls.

-5- Another dovecote can be visited in the Iroise country, in the commune of Plouarzel: The Lanhalla dovecote

Thanks for his help to Jean-François LE MENEC, President of the "SOS Château de Trémazan" association, and for the documents he kindly provided.

The association "SOS Château de Trémazan" has published two books that can be obtained at the 'Maison des Chanoines', Kersaint, 29840 Landunvez.

The first one, aimed at young people and the general public, is abundantly illustrated. He first tells the legend about the castle and then places the fortress in its time. History and architecture mingle throughout the work. This well-documented book was the main source for this page.
The other book, intended for a more informed reader, contains the proceedings of a three-day multidisciplinary symposium held in Brest in June 2004 on the theme of the Castle of Trémazan. Archaeologists, genealogists and heraldic, dendrochronology or petrography specialists rubbed shoulders with historians, painters and draftsmen. The book contains the full text of their papers.