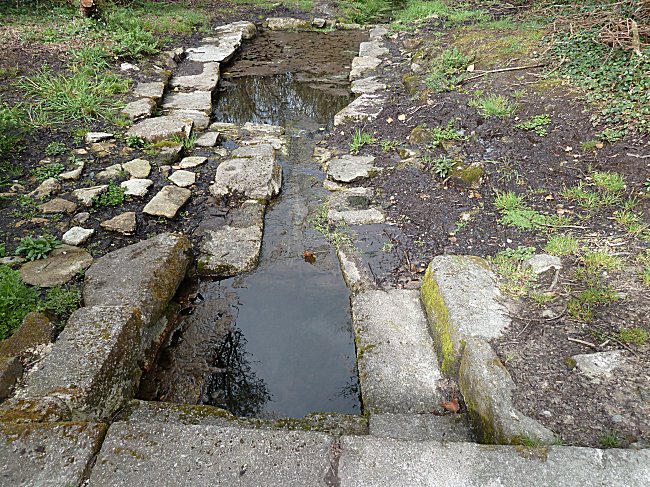 Access : Going from St-Renan to Argenton on the D68 road, pass the Plourin roundabout and, still on the same road, 3 km further, turn right towards Landunvez. Cross this village and continue towards Kersaint. After 2 km, reaching the first houses of Kersaint, turn right into rue du Viaduc. Then take the second street on the right ("Fontaine de Sainte Haude" sign). Park at 300m, where the asphalt road stops and continue on foot in the path that extends the road. 200m further, (enamelled lava sign) turn left onto the path leading to the nearby fountain. Note that access to the fountain is quite muddy during the rainy season. 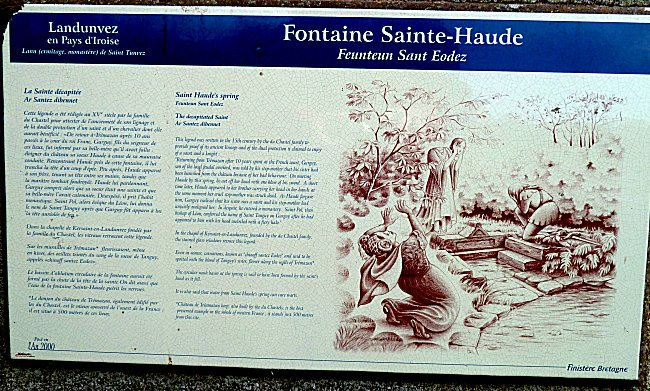 The Saint Haude fountain is a spring set in a charming wooded site, far from any habitation. 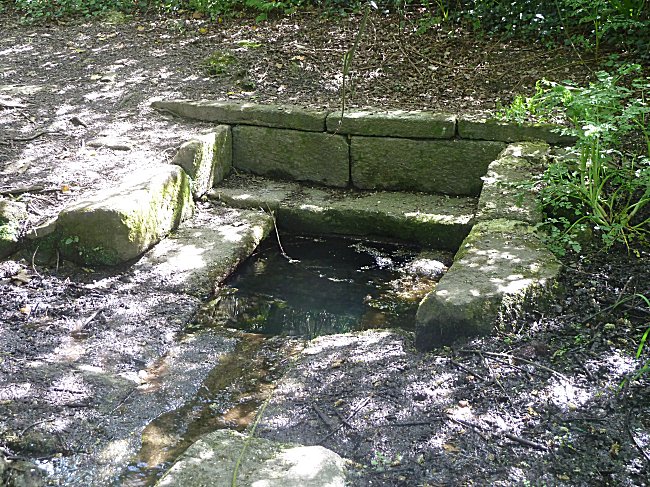 A small basin collects water directly from the source and fills containers.
A stone gutter then directs the liquid towards a rather rough lavoir bordered by a few large slabs. The first, on the right side, is in fact a Gallic stele which, lying down, is of a new use here. 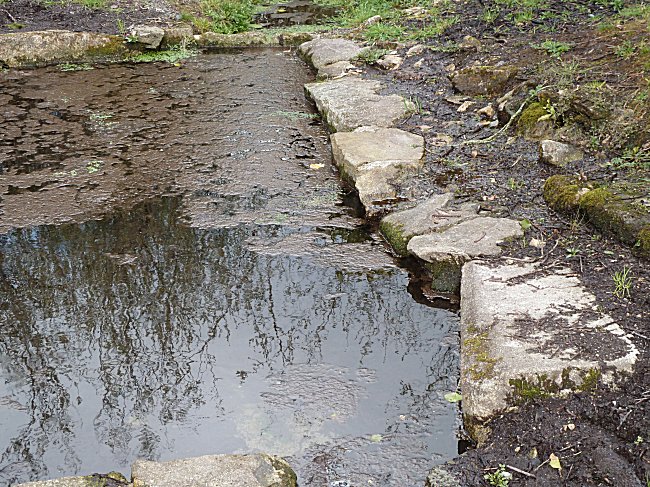 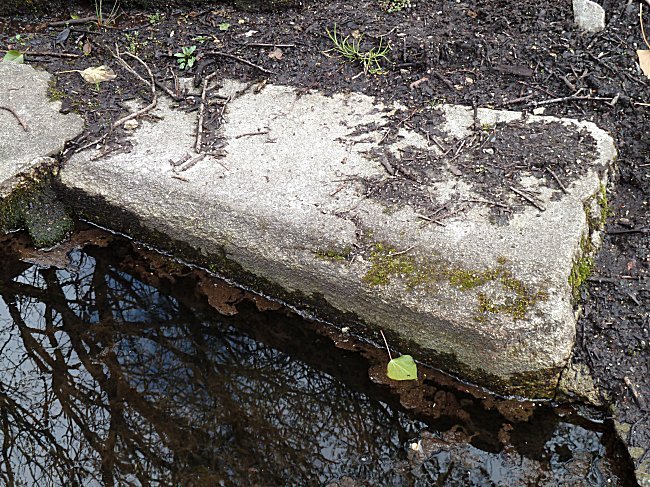 It can be seen that the gutter feeding the lavoir previously crosses a small circular basin. The visitor especially wonders about the reason for the presence of a lavoir in a place so far from any dwelling. But this has not always been the case. 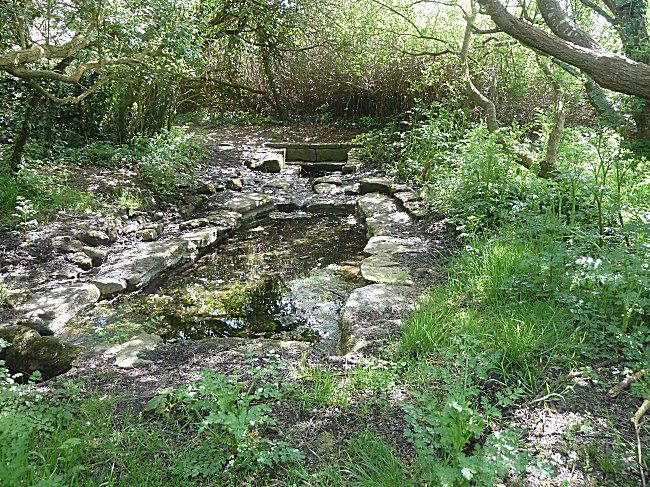 Some time after the end of the reign of Clovis, Lord Golon of Trémazan, near Kersaint, had two children: a girl, Haude, and a boy, Gurguy. When his wife died, he would have remarried an English woman. The mother-in-law would have particularly mistreated these children who were not hers. Gurguy would have taken refuge at the court of King Childebert, and Haude, very pious, would have been placed in a farm where her pleasure was to devote herself to prayer.
However, the stepmother was spreading lies about the girl, accusing her of leading a life of debauchery. Back after twelve years of absence, Gurguy naively believed these rumours, and rushed to the farm. Her sister was washing clothes in the source. He went there and beheaded her with his sword. It was, it seems, November 18, 545. Look at a calendar, November 18 is the day of Ste Aude (without H, but she is the same person). And what saint are we celebrating the next day?

In the evening, a miracle took place at the castle: Haude was seen coming, holding her head in her hands 1. She put it back on her neck and accused her mother-in-law of being the cause of her death. The stepmother denied this accusation, but died immediately. 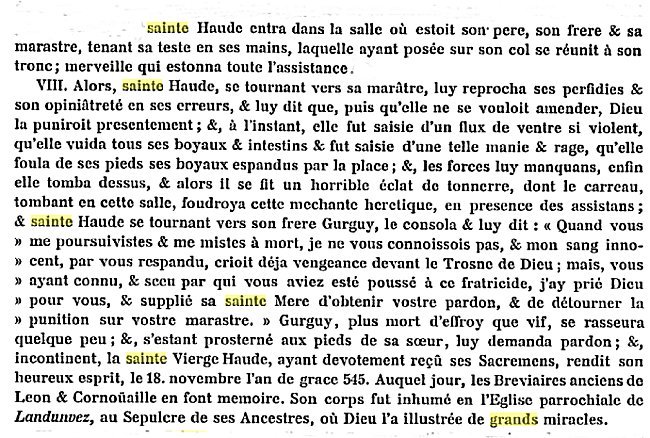 Extract from R.P.Albert LE GRAND :
« Les vies des saincts de la Bretaigne armorique ».1637.
Ed. J.Salaün, Quimper 1901.
In the text above, the word 'carreau' refers to lightning.
The author compares it to a crossbow bolt (an arrow).

As for Gurguy, forgiven by his sister but remorseful, he took refuge with Saint Pol Aurélien, bishop of Leon. He made penance for forty days, took the name of "Tanguy"2 and expiated his crime by founding the abbey of Saint-Mathieu. He was later venerated as 'Saint Tanguy'. Several lords of the castle of Trémazan then bore the first name of Tanguy. And that's why you find his name on the calendar the day after his sister's holy day.

It is not surprising that such a legend gives this source a sacred character. The small circular basin crossed by the gutter would be the trace left by Haude's head in the stone. The water of the fountain would also cure the warts: it would be enough to throw a pin in the small basin then to resume it to pierce the wart that one wishes to make disappear.
It is also said that around this fabulous site, as in the ruins of the seigneurial keep, red wallflowers bloom every year to remember the crime that was committed a thousand and a half years ago. 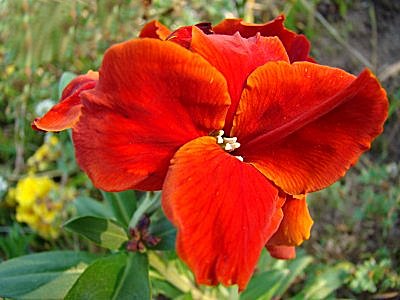 That very old legend is reproduced in a text of the Lord of Tremazan, dated from the XVth century, intended to prove his ancestry with a family of saints.

The source, like many others, was probably known from immemorial times and already venerated by the inhabitants before Christianity made it a sacred fountain, thanks to legend. Anyway, it is a little charming site that should be better known.


-1- A character who, after being decapitated, is depicted carrying his head in his hands is called a "cephalophore" (from the Greek kephale, head, and pherin, carry). It is the case of a hundred saints in France, among whom the most famous is undoubtedly Saint Denis, on whose tomb was raised the basilica of the kings of France. Most of these characters are supposed to have lived, like Saint Haude, in Merovingian times. In the West, in addition to Saint Haude in Landunvez, Saint Noyale in Noyal-Pontivy, Saint Tréphine in Pontivy, Saint Gohard in Nantes and Angers, Saint Trémeur in Carhaix and Saint Miliau in Guimiliau are worshipped.

-2- It is said that it was Saint Pol Aurelian himself who called Gurguy "Tanguy" because he had appeared to him haloed in a circle of fire. And 'tan', in Breton, means fire.

The association "Les Amis de Saint Mathieu" has edited this small booklet of 32 pages, nicely illustrated with watercolours
by J-P.Guiriec, which gives the full text
of the R.P. Le Grand relating to the legend.
It is on sale at the St-Mathieu museum.

Print the itinerary below to discover other places reminiscent of this legend : 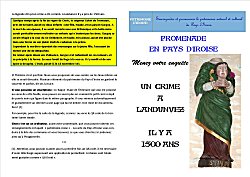 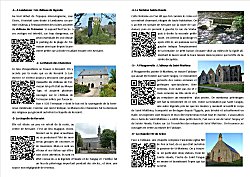