The quarry of Kerglonou (Chanter Braz)
and the obelisk of Lanildut

If you don't have time to read all this page, you can perhaps listen to a part of it in french : plug in the sound and find here the history of the obelisk of Lanildut as well as many other elements of our heritage on the website
'Voice of Heritage'. 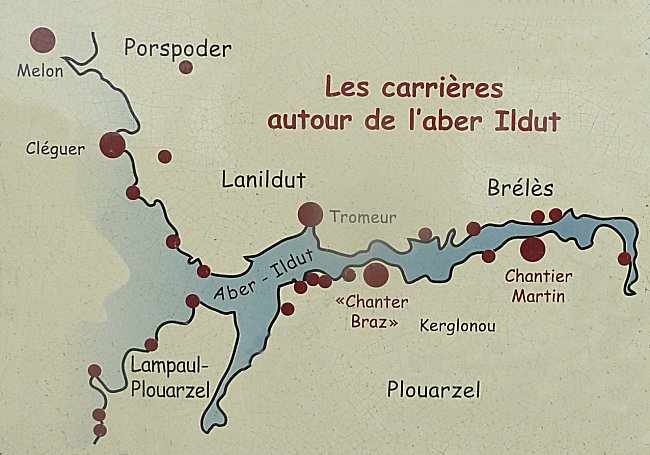 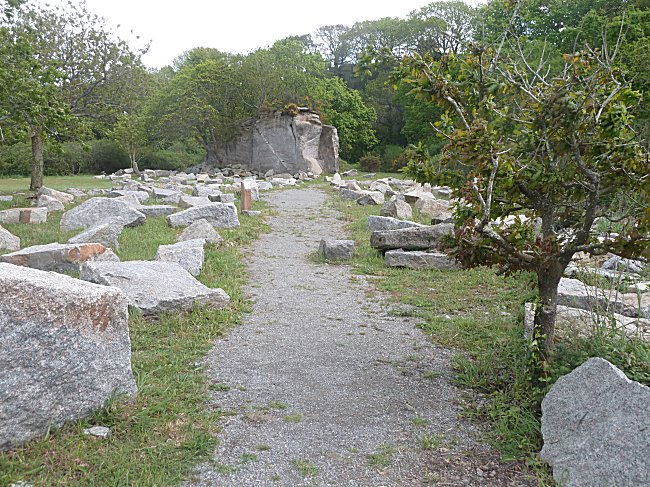 Access : The former quarry of Kerglonou is located on the southern bank of the river Aber Ildut. It can be reached by the D28 road between Plouarzel and Brélès. Halfway, west of the D28, take a small signposted road "Cale de Kerglonou" and follow the signs to the quay. A wide driveway along the Aber Ildut leads nearby to the old quarry that was once called Chanter Braz.


The granite1 of Aber Ildut has been famous since prehistory : superb menhirs, such as those of Kerloas and Kergadiou, were carved from this rock. Later, in the Gallic period, it was the material of many stelae.
The rock outcrops in various places around Lanildut and Porspoder, but it is mainly along the shoreline and the Aber Ildut that man has always taken it for his constructions. Divided by diaclases, it often forms large parallelepipeds that favours its exploitation.
Granitic magma was injected about 300 million years ago into a weakness in the Earth's crust called the Porspoder's rock. It is one of the most recent granites in France. 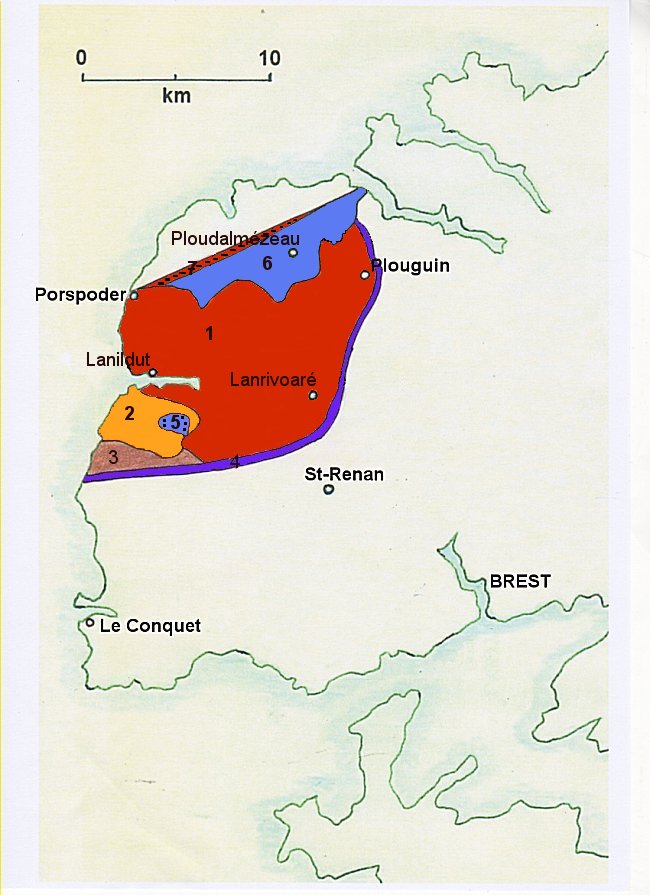 The granite extracted at Kerglonou contains flakes of black mica ( biotite ) with a bright shine as well as large crystals of pink feldspar - porphyroid facies - which give it its pretty shade and a great resistance against erosion. This rock looks great when polished. Stonemasons have called it "Laber's granite", Aber in one word. It frequently contains dark grey oblong enclaves called "toads" by quarrymen. As the magma rose through the Earth's crust, it ripped off the surrounding rock that re-crystallized on contact. 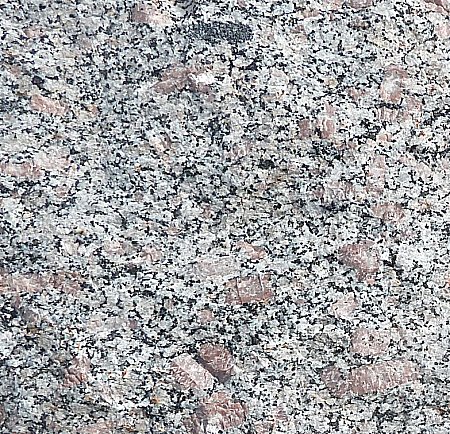 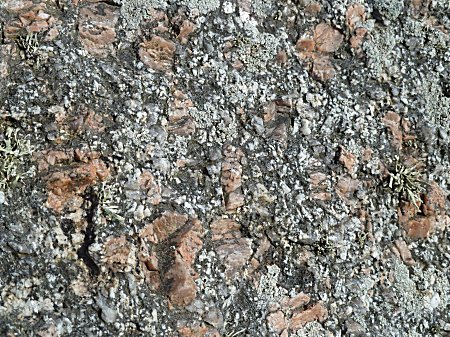 You can admire the granite of the Aber Ildut by moving among the blocks strewn with the remains of the old quarry, called Chanter Braz ("The Great Worksite"), abandoned a few years before the Second World War. Boards have been placed to provide the public with some explanations. 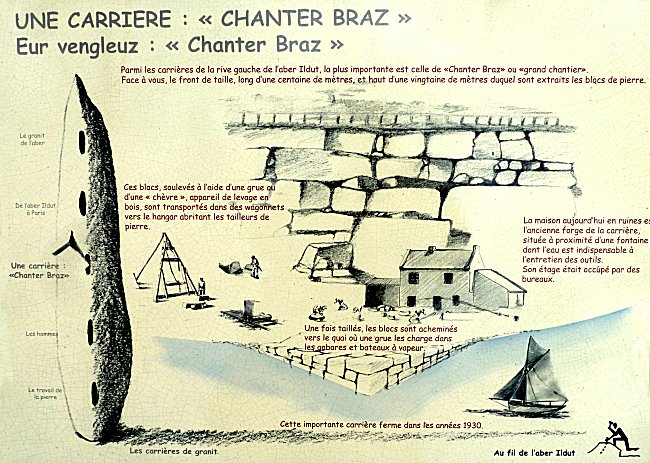 The current ruin housed a forge on the ground floor, where cutting tools were made and repaired, as well as offices on the first floor. The quarrymen exploited the slope of the plateau towards the Aber Ildut, along a working face forming a cliff about ten metres high.
The stones cut on site under a shed were then transported by sea using the wharf in front of the ruined house. For years many sailboats from the region were carrying granite from neighbouring quarries to Brest and to the ports of Bordeaux, Cherbourg, Le Havre, Rouen, Paris and Dunkirk. In 1905 alone, there were 1215 ships in the port of Aber-Ildut, which loaded 45468 tons of granite. This rock was also used to build London's wharves. It was a driving force for the entire local economy for several centuries. 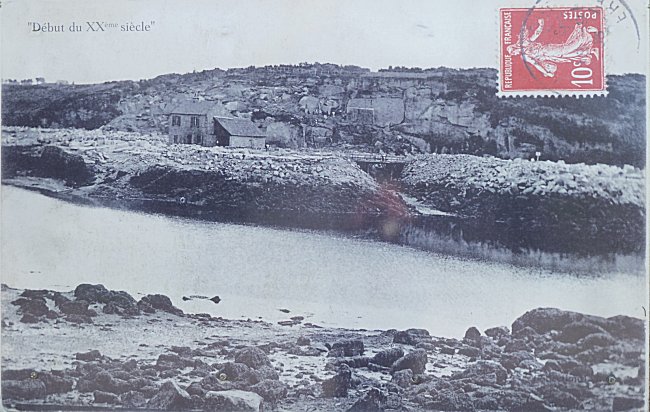 The base of the obelisk

The pink granite of the Aber Ildut conquered its letters of nobility in the 19th century as soon as it had been chosen to make the pedestal of the obelisk on the Place de la Concorde in Paris.
Everyone knows that this obelisk was given to France in 1829 by Sultan Mehemet Ali, Viceroy of Egypt at the time. It was a gesture of thanks to the country which, thanks to Champollion, had made it possible to decipher the hieroglyphics and thus to make the whole world discover the extent of ancient Egyptian civilization. 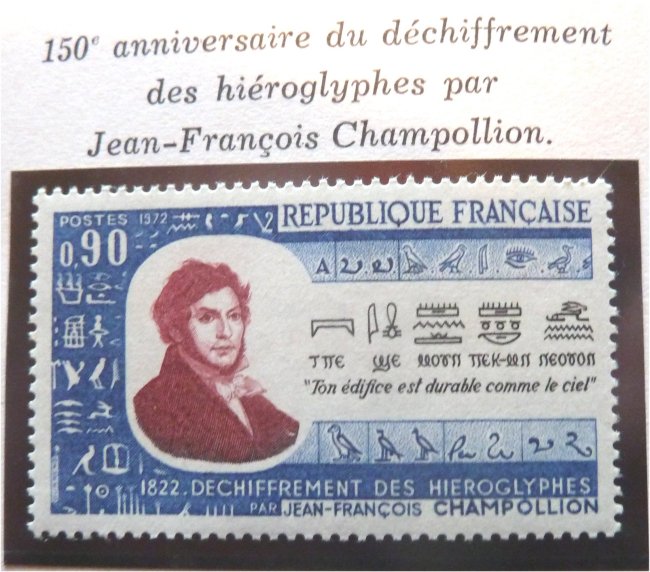 In fact, two obelisks were offered : those that framed the entrance to Luxor Temple. As it was not possible to ship together the both monuments 23 m long and 230 tons each, Champollion chose the one on the right.
The obelisk, as well as its support, were transported by sea to Paris. But, a small problem, the ornamentation of the pedestal showing baboons having erection was considered too obscene to appear on a public monument. Moreover, this base was much too small : a much higher pedestal was needed to prevent the public from damaging the hieroglyphs and also to engrave something else than baboons. The baboons of the base.

While the original was destined for the Louvre Museum, it was decided to replace the entire pedestal.
The choice was made for the « Laber granite », whose composition was the closest to the Aswan granite. 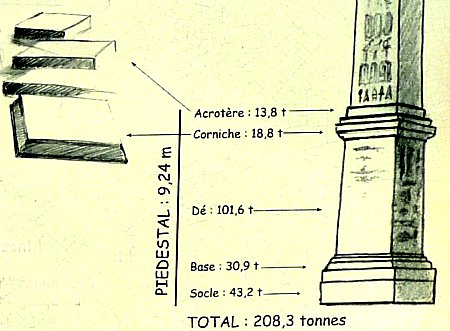 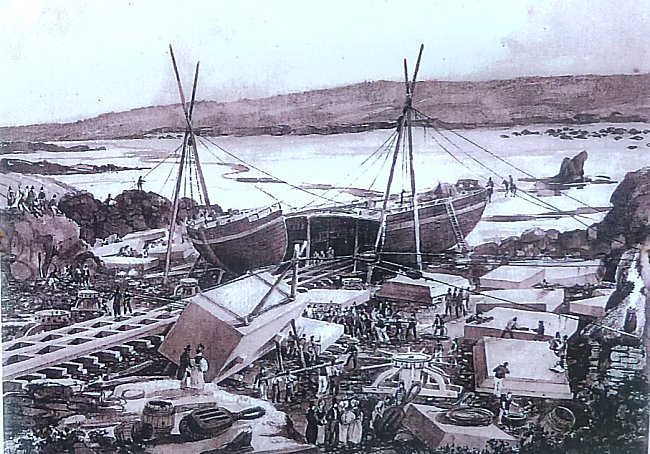 Explanatory board accompanying the replica of the obelisk in Lanildut.
According to a wash drawing, undated, found in an antique dealer in Honfleur.
Document : Association Tre-Arzh Plouarzel.

Coming from 5 nearby quarries, the elements of the new pedestal, the largest of which weighed more than 100 tons, were loaded along the Aber Ildut river. To ship such boulders, the Luxor's hull had been sawn off and a 60 m long berth had been built on the foreshore that was submerged twice a day. 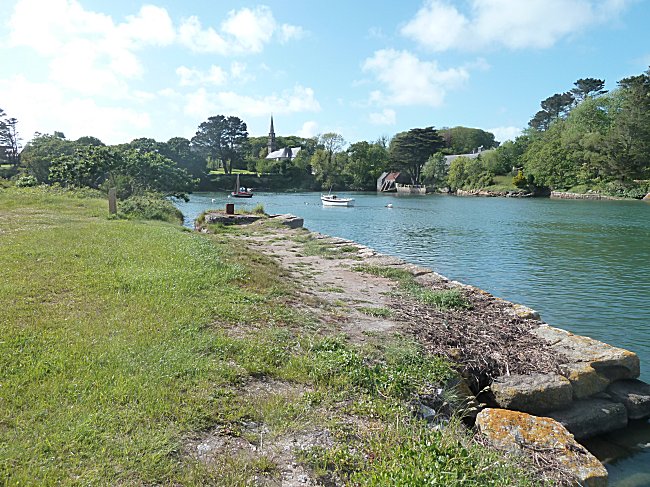 Kerglonou : The old stone loading dock. In the background, the Lanildut bell tower.

The inauguration of the complex took place in the presence of King Louis-Philippe on October 25, 1836. A replica in reduction of the Concorde Square's obelisk was erected in 2015 in front of the Lanildut's inner harbour, in memory of this event and above all in tribute to all the quarrymen. 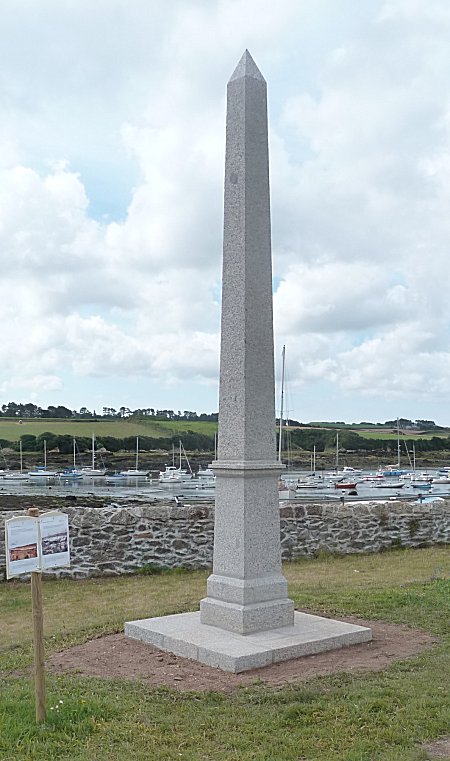 Lanildut : 1/7th replica of the obelisk. 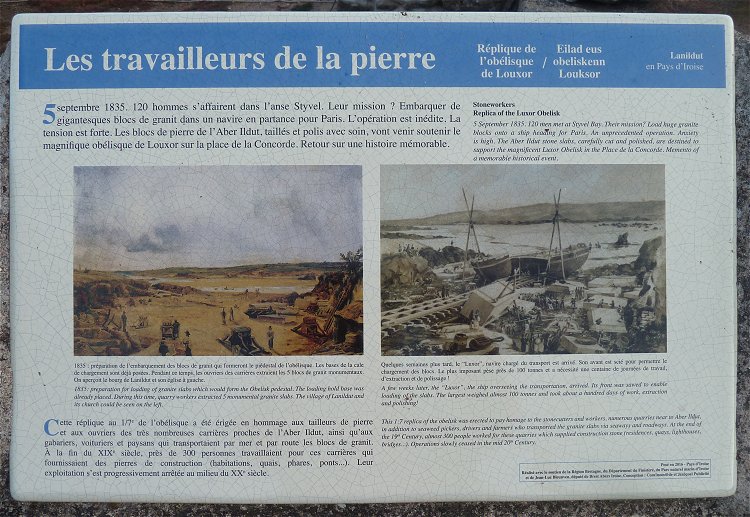 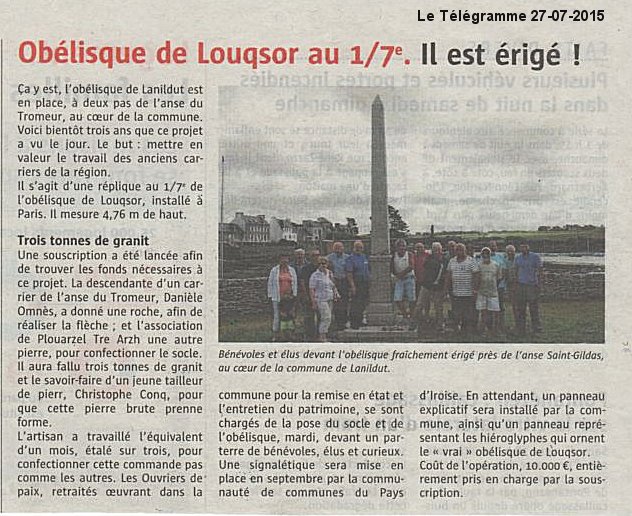 And the second obelisk, you might say? There were indeed two that had been given to France?
As it had taken seven years to build the first one in Paris, and also as a cost-saving measure, it was decided to postpone the transport project until later...
Then it was forgotten...
In 1981, President Mitterrand officially gave this second obelisk back to Egypt, which had still not moved from the place where it had been erected in antiquity. Very few people today still know that for a short time in its history this monument had become French.

Our thanks, for his collaboration, to Mr. Louis CHAURIS, university professor and co-author of the geological map of Brittany, as well as to Mr. Jean-Claude JEZEQUEL, president of the association Tre Arzh of Plouarzel for his help and the supply of documents.


-1- Granite or granite?
In French, these two spellings do not mean the same thing :
With an e, it is the name given by geologists for a very hard magmatic rock characterized by its crystals of quartz, feldspar and mica.
Without e, it is a more general term used by professionals, quarrymen and marble workers, to designate any very hard rock, not necessarily magmatic. Thus the granite of the Ardennes is a limestone. A granit worktop has therefore not necessarily been cut from granite.

1- About the granite of Aber :

A very interesting study about the Aber-Ildut's quarries, written by the Plouarzel Tud Ha Bro Research and local History Group will also be available at the Plouarzel media library. This very complete 172-page document is not only interested in Chanter Braz, Kerglonou's quarry, but also in the exploitation of granite on both sides of the Aber-Ildut river : geological particularities, places and means of extraction, work and tools of quarries, use of stone and means of transport. Abundantly illustrated, it is an essential document that brings back to life an entire forgotten sector of the local economy. 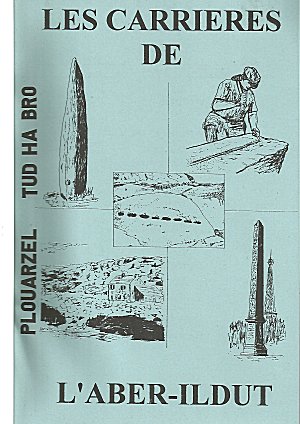 2- About Champollion and the journey of the obelisk :


Read on the internet the page that Gallica dedicated to him on the occasion of the bicentenary of the deciphering of the hieroglyphs by clicking here : Blog Gallica

2- About the journey of the obelisk : Gallica 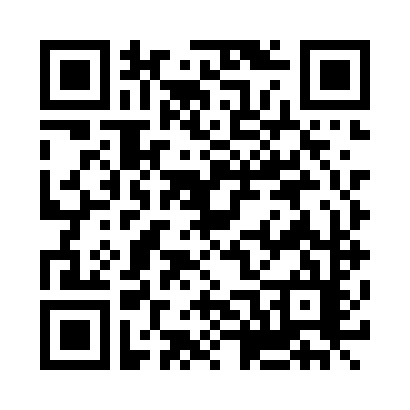