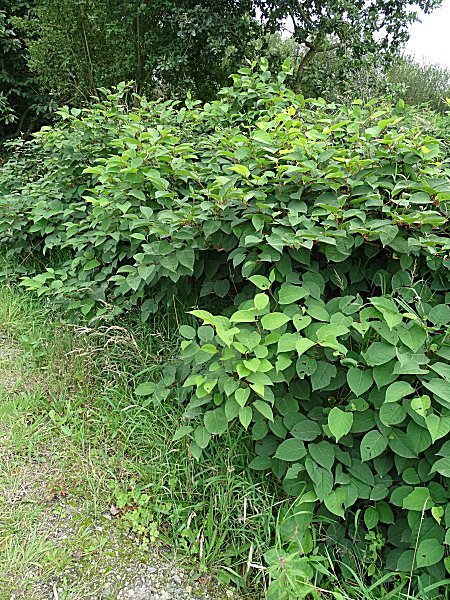 This exotic plant that threatens our plant heritage does not particularly attract the attention of the walker. It is sometimes found in embankments and along roadsides or railway tracks, but most often along watercourses. It loves the slightly damp ground, and also the rubble where it was unintentionally brought and where it likes the remains of metal waste. 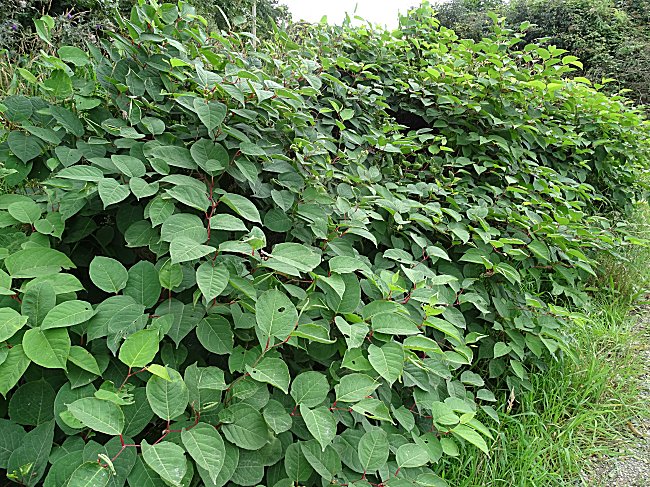 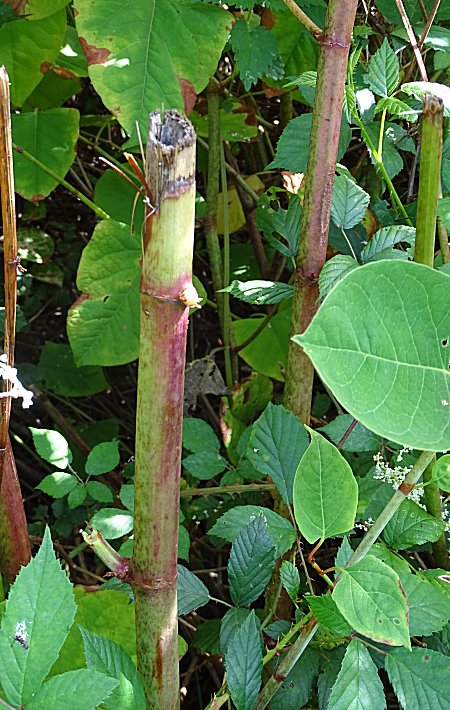 Japanese knotweed, which grows in Japan along volcanic slopes, was introduced to Europe in the 19th century as an ornamental plant due to the beauty of its foliage. We can admire its large oval leaves with pointed tips, whose base is truncated, as well as its reddish stems, whose embossed knots, a little like those of bamboo, have given it its name. 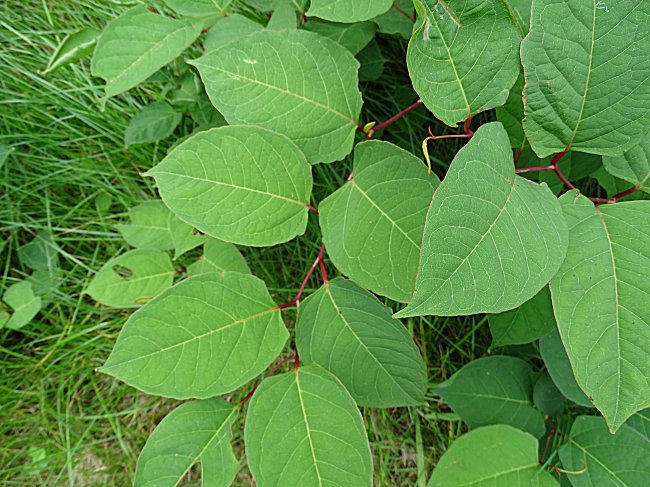 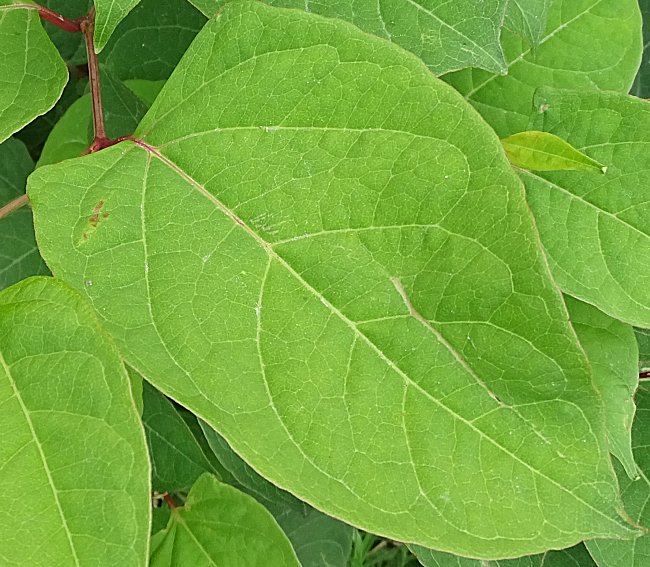 But we also admire the speed with which it grows up. In spring, the stems can grow by 4 to 5 cm per day and reach a height of more than 4 m ! The knotweed flowers late, only in autumn, and then offers insects, including bees, a delicious nectar that they will look for at the bottom of its small clusters of white flowers. 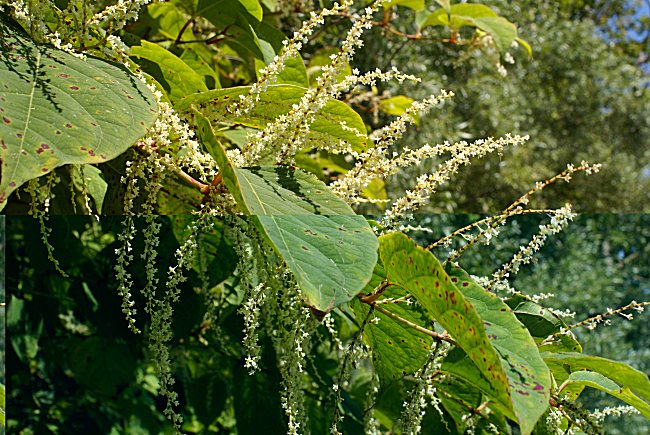 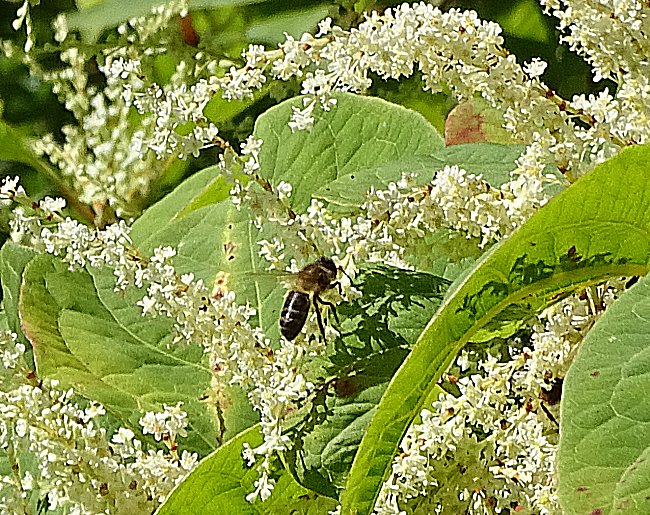 The admiration of the early days quickly turns into a nightmare for the landowner when he notices that the plant becomes very invasive. It is not its seeds that are to be feared : they are most often sterile. But Japanese knotweed, like all plants of its kind, develops underground a network of monstrous rhizomes1 that extend in all directions, bud, and give rise to a quantity of new plants. 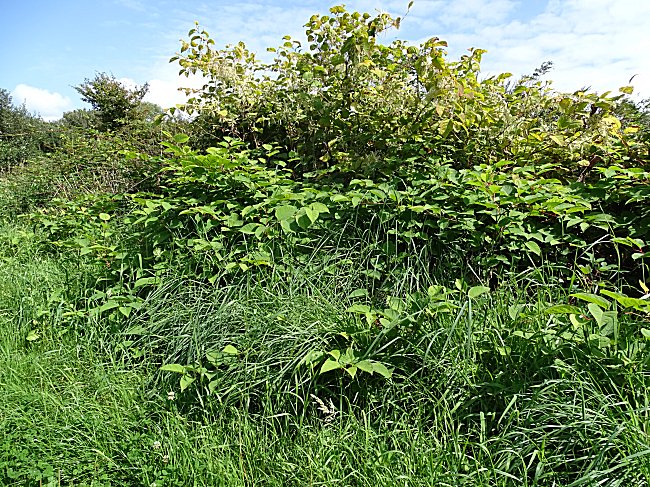 These kinds of large, very deep roots also have the ability to spread a fatal toxin to competing plants. Underground, it's chemical warfare !
Under these conditions, the owner quickly finds himself in the obligation to control this exponential development which threatens not only his own plantations, but also those of the neighbourhood. Along the banks of waterways, the access trails are quickly invaded and obstructed, to the great displeasure of fishermen and hikers.

This beautiful plant is a real plague : when cut, mowed down to the ground, it grows back quickly and continues to grow. Herbicides do not reach its network of rhizomes, sometimes more than one metre deep. They are also known to be harmful to other plants and the environment. Fragments cut from its aerial vegetation and rhizomes, even crushed, have the power to give birth to new seedlings. And the extraction of rhizomes is, moreover, particularly difficult. Most often, in the face of so many difficulties, man gives up and the plant continues its invasion. The best attitude is to avoid spreading it : we do not pick it, we do not plant it, of course, but we do not use a lawnmower or brushcutter likely on the contrary to favour its dispersion : a single 5 g shaving can give birth to a new shoot ! You can try to exhaust the rhizomes by cutting all the shoots low to the ground several times a year until they no longer grow back. However, it is important to avoid putting cutting waste in compost or at the waste disposal centre. They must absolutely be incinerated.
There is also the preventive action : planting willows, for example, where knotweed has not yet arrived and mulching the ground to contain the appearance of new shoots. 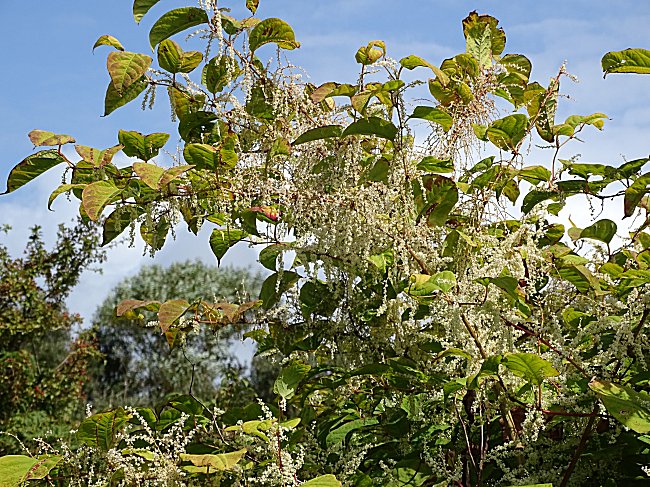 -1- A rhizome is an underground extension of the plant, full of reserves and punctuated by nodes capable of developing buds and roots that will give rise to new plants.
Not to be confused with a root, which is an underground extension of the stem, without leaves or buds, and which has the task of fixing the plant to the ground and pumping water and mineral salts intended for the plant's diet through photosynthesis that is exercised by the leaves. 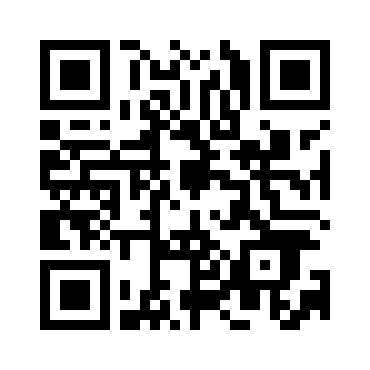