The marine eyes of the Iroise Country

You may have noticed this strange eye, made of glass and ceramics, which sometimes adorns a rock, sometimes a jetty by the sea.
The iris is made up of an electrical insulator, with an array of multicoloured marbles placed in bottle necks representing the contour of the eye. The cornea is represented by a patchwork of small shards of earthenware ceramics.
This eye has no esoteric meaning.
It is the work of Pierre Chanteau, a Breton artist from Carantec, who was granted permission from the municipality to strategically adorn the coastline. 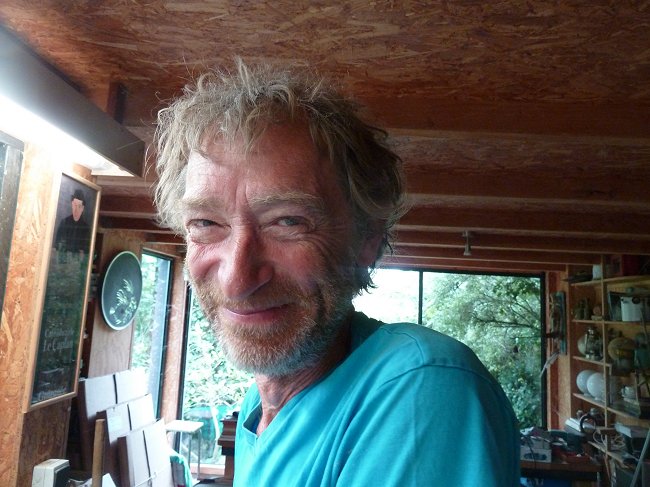 Artist Pierre Chanteau in his studio So, what is behind the meaning of that eye spying on you ? The artist only wishes that this furtive glance beaten by the waves reminds the walker of the multitude of sailors who have perished at sea and the courageous action of the many Breton lifeboats volunteers, amongst whom it is worth mentioning Mr Aristide Lucas. 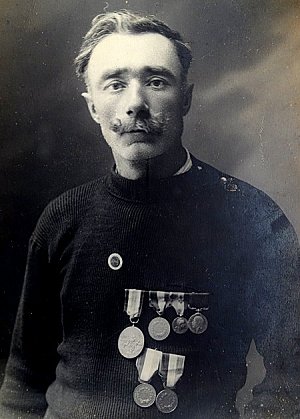 
Pierre Chanteau created and anchored 113 similar compositions on the shore of Brittany. A monumental challenge and fine artistic skills, alas too little known.
14 of them are placed in the territory of Iroise Country.
But where are they ?

We suggest you go looking for them. These artist's eyes are more often placed in ports from which sailors and rescuers set sail. But not only : they can sometimes be found on a disused slipway or simply on a wall or a rock on the coast.
They are now part of our heritage.
Look out for them and take a picture. Try to include a clue in your photo to the whereabouts of the eyes. Then invent ( in English ) a short riddle to guide people to their secret resting place. Then send us the picture and your riddle by email to the address below.

If they are accepted by our jury, they will be placed on this page with your name or nickname.

The gallery of pictures and riddles of Internet users

( Beware, the sea can sometimes completely cover the eye you are looking for.)

Here are in alphabetical order the 14 municipalities of the Iroise Country where a sea eye has been fixed (this is not the order of the pictures) :

You should also know that in Lanildut, in front of the town hall, at the foot of the obelisk, other photos of Pierre Chanteau's Iroise marine eyes are on display. Don't miss the opportunity to discover them. 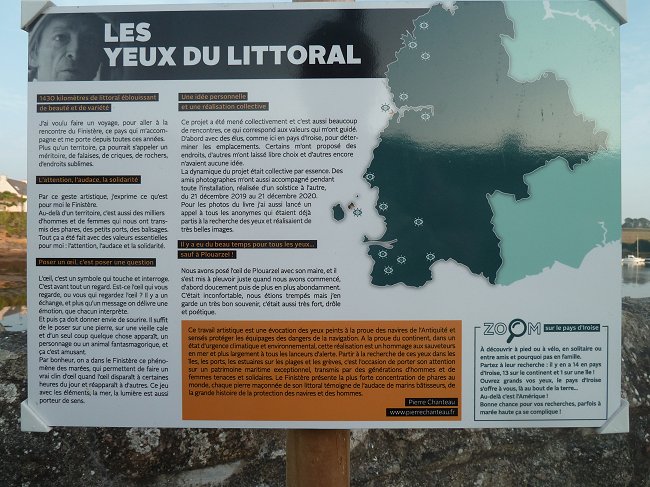 The artist has even published a small guide of the marine eyes that he has put on the whole Finistère coastline. It does not reveal their exact location. He just exposes the black and white photos. The reader is thus invited to a real treasure hunt whose aim is to help him discover the Breton coastline. 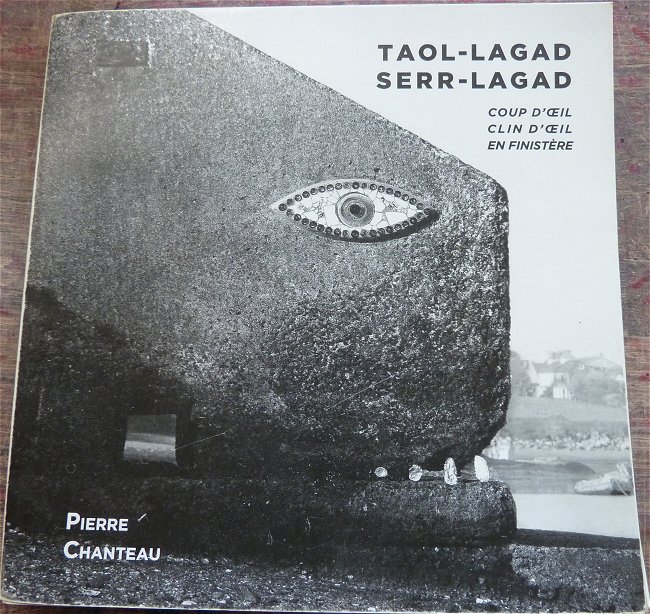 The book, sold partly to the benefit of the SNSM rescue association and SOS Méditerranée, was so successful that it was quickly sold out. But you might still have a chance to get it used.


- Who's on the jury?
We won't give you their names, but there are several of them, including the webmaster.
- Can we send you several pictures and riddles?
As many as you want, the jury will choose what to put online.
- Can we send you a new photo or a new riddle for an eye already on the page ?
Of course, that's even the point of the game. Give us a better picture or a better riddle. The site is alive, it must always evolve.
- Do we need to explain the riddles we've sent to you ?
No, the jury knows the locations of the eyes and must be able to recognize them easily through the riddle, even if it is not obvious at first glance.
- What to do when we think have found the answer ?
Check on the spot if possible, or send us an email to ask if it is good. There's nothing to gain, only the pleasure of having found it. And move on to another riddle, it's a game.
- Can we put a person on the picture or do a selfie?
No. The web page will be seen worldwide and people's faces could be copied and used on porn or malicious sites. We don't take that risk.
- Is there a deadline to participate in this game?
No. The game is open every day 24 hours a day as long as this page is on the Internet.
- Is there a connection between these modern marine eyes and the eye of Horus or the eye of Ra, which were supposed to protect the ancient Egyptians?
No, there is no direct connection. The protective function attributed to the eye and its representation is universal and goes back to the beginning of time. Don't we say ' 'I'm keeping an eye on you'? Recalling the shipwrecks and the missing at sea is in fact an act of protection towards those who take to the sea.


Marine eyes outside the Pays d'Iroise

Some Internet users sent us photos of marine eyes that Pierre Chanteau has taken, still in Finistère, but outside the Pays d'Iroise. They are therefore geographically offside.
But it would be a shame if, having taken the trouble to take pictures of these eyes and to elaborate riddles, their authors could not see them posted on this page. We present them to you below.
Dites-nous si vous les avez reconnues. 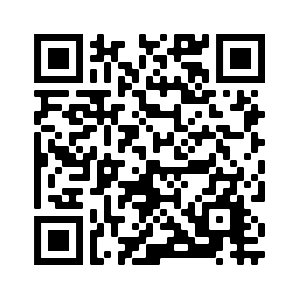