Registered in the Inventory of Historic Monuments on October 18, 1926 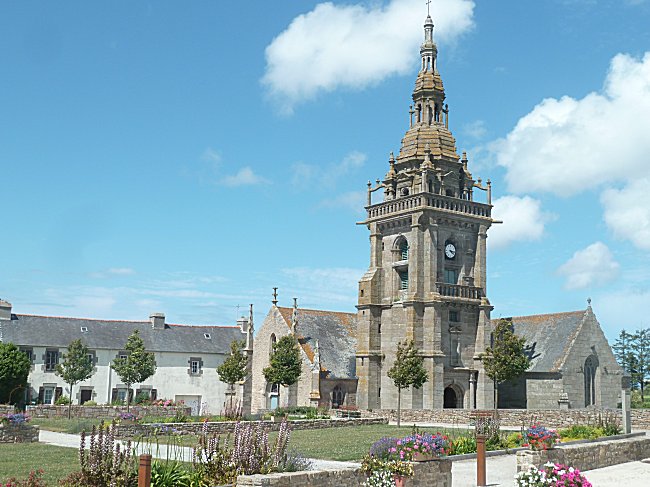 Access : Leave Ploudalmézeau by the Lannilis road ( D28) and turn left towards Lampaul-Ploudalmézeau. We arrive directly in the center of the village where we can easily park.

The name of the commune recalls that it was originally a simple truce of the Ploudalmézeau's parish.
According to tradition, in the VIth century, after its landing in Ouessant, Saint Pol Aurélien, future bishop of Léon, would have established here an oratory and a temporary camp near a spring. The present church, built on the same site 1100 years later, was dedicated to him. 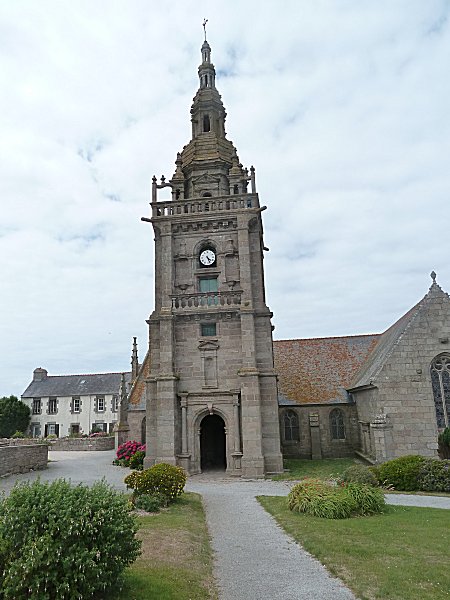 It is first of all its extraordinary bell tower that we admire when we discover this church. A monumental tower, leaning somewhat due to the weight of the building and the instability of a damp floor. This bell tower was built from 1626 to 1635. It was however struck by lightning in 1855 and partially rebuilt. Flanked in corners by four large buttresses that rise up to the great gallery, it comprises four floors surmounted by a dome, three successive lanterns and is built along the southern side of the nave. 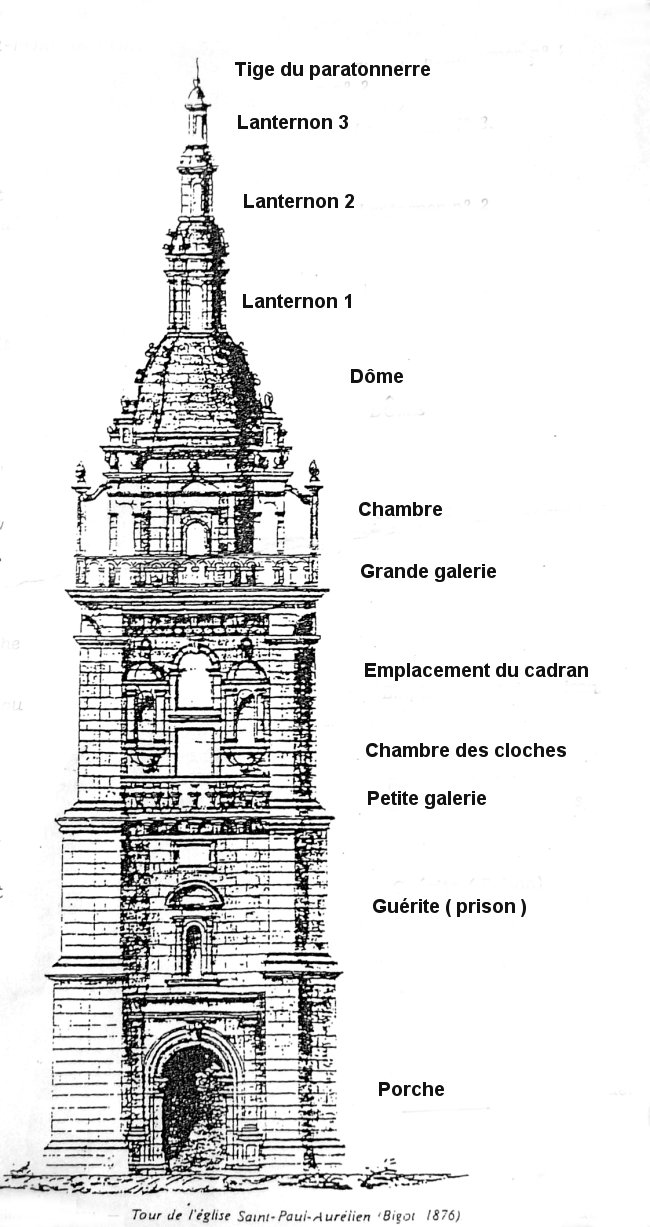 On this 1876 drawing, the location of the clock is still empty
and the gargoyles as well as the weathercock are absent.

The church is entered through a 6 x 4 m porch with 12 empty niches decorated with spheres and crescents. At a height of 4 m, the vault is adorned with a beautiful hanging keystone. The floor is paved with old tombstones from the cemetery surrounding, which was moved away the monument in 1853. 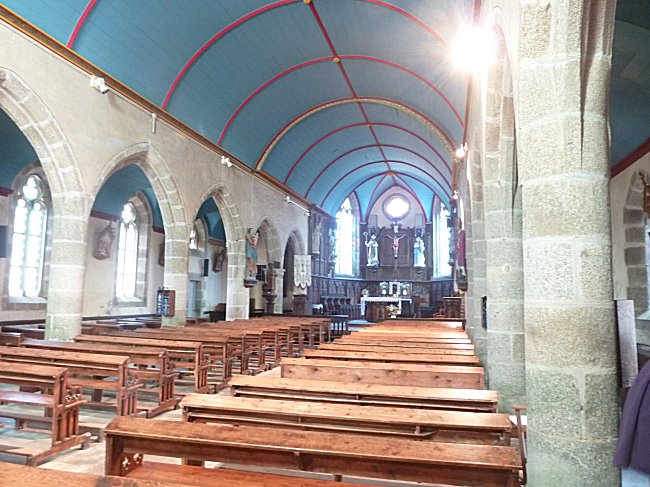 The nave is able of aisles that the stained-glass windows illuminate. It has seven spans. The chancel occupies the last one. 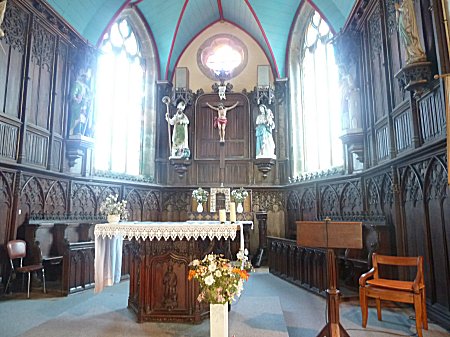 Two wings, on either side of the nave, form a transept leading to the two spans preceding the chancel. They house vast chapels. 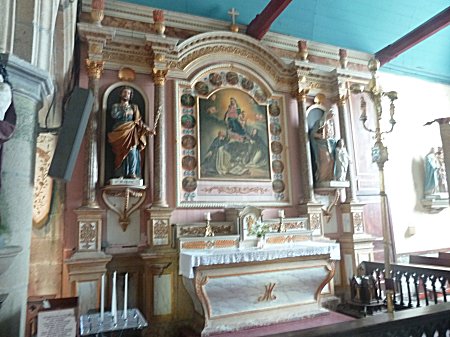 Chapel of the Rosary: The altarpiece has four fluted columns.
In the centre, the Rosary painting is surrounded by painted medallions.
The statues of St Joseph and the group formed by St Anne and her daughter Mary frame it.

Among the other statues of the building, we notice a curious Virgin Mother of the XVIth century trampling a female demon with snake tail who hands her an apple. Symbolically, the Christian faith thus triumphs over original sin.

The climb in the bell tower

On certain occasions, particulary during the summer on Tuesdays and Saturdays between 2.30 pm and 5 pm, it is possible to climb into the bell tower by a narrow spiral staircase with 78 steps. This allows access to the bell room. 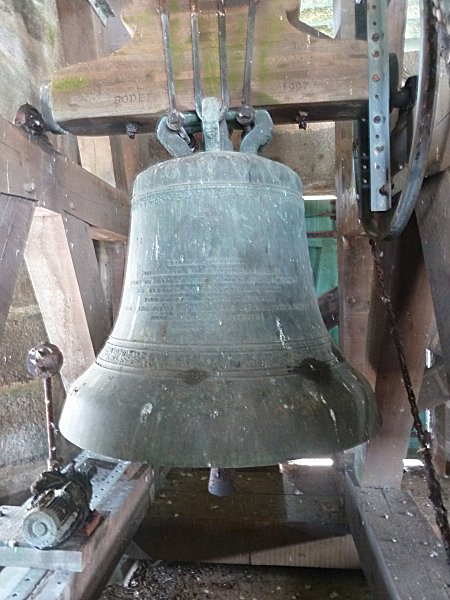 A great bell is accompanied by two smaller.
The two electric motors on the sides allow one to obtain with hammers the carillon of the clock, the tocsin and to toll the death knell, the other to ring a full peal for the religious services by swinging the bells with large wheels and chains.
For more details in french on how the bells work, click here on : modes de volées

Continuing up, you reach the big gallery. From the top of this stone balcony which goes around the bell tower, you can enjoy a magnificent panorama over the village itself, all the surrounding countryside and the whole coast which is only one kilometre away, 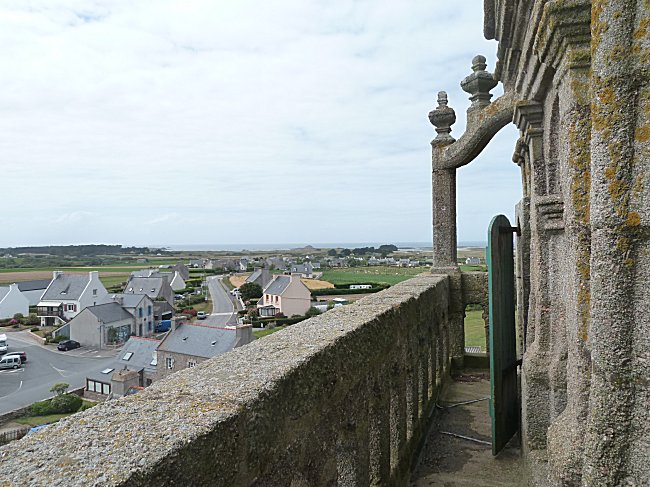 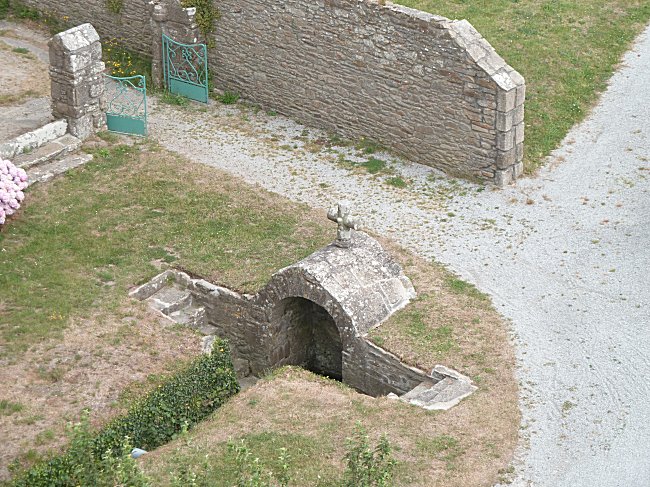 The large gallery offers a bird's eye view of the spring-fountain
which is at the origin of the choice of this site by Saint-Pol Aurélien and his companions. 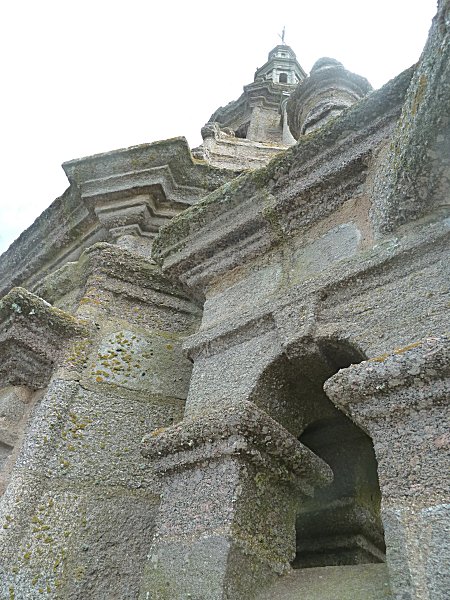 We are only halfway up a steeple with a particularly rich architecture. The decorative elements are abundant, including in the less visible parts of the building. The large gallery also allows the visitor to appreciate the quality of the construction. The stone used throughout the building is, as it should be, the beautiful granite of the Aber Ildut with large crystals of pink feldspar.

Before starting the descent, more difficult than the ascent, by the narrow staircase, it is recommended to close the door tightly to avoid the intrusion of pigeons into the nave.

The website of the municipality of Lampaul-Ploudalmézeau dedicates, under a very beautiful photo of the bell tower, a whole page to the church of St Pol Aurélien. In particular, it presents interesting details about the patron saint of the church and the statues that decorate the nave.
municipality website

Concerts are planned every year in this church whose acoustics are remarkable. See on this website the section Animations and festivals .