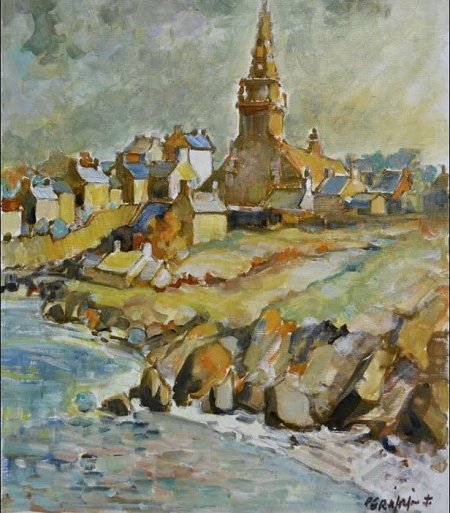 Access:
From St-Renan, take the D 68 towards Argenton. In front of the sea, turn left. St-Budoc church is 1 km away, in the centre of Porspoder, on the right side of the road and facing the sea. We can park in the immediate vicinity. 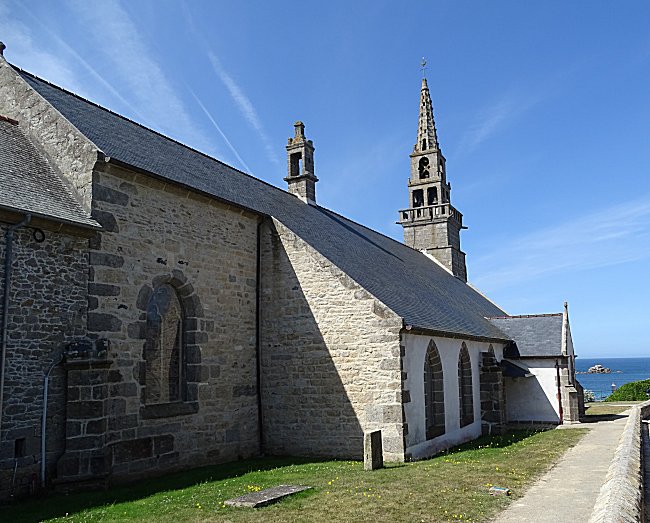 The village of Porspoder was once a truce in the Plourin's parish which was very extensive. An old building, the Notre-Dame chapel, located a little higher on the square, was already reported in 1381. The present church dates from 1645. The granite of the Aber-Ildut can be recognised in its construction. The building has been heightened in 1857. A porch has been added on the south side and a chapel to the north.
Since then, the entrance is through the side porch and not through the bell tower door, which is highlighted by a very simple ornamentation of the entablature. An escutcheon fascé of six pieces , with the coat arms of The Du Chastel were the powerful lords of Tremazan in Landunvez. Du Chastel and now completely erased, surmounts the old entrance. 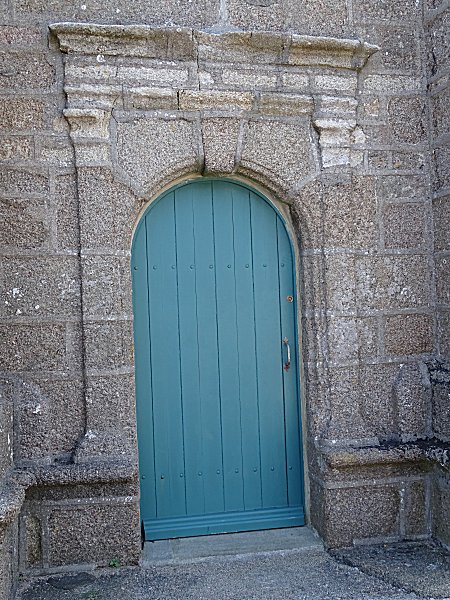 The bell tower is original: it's a massive square tower half included in the building. Behind a false gallery, a recessed floor supports the only real gallery. A small square tower follows it with two floors largely perforated to shelter the bells. Its corners are decorated with pinnacles. A stone arrow In french we use the verb 'amortir' to say that one element vertically extends another to finish it. amortizes the whole thing. Its mass is decorated with hooks which make it more slender in the sky. A little bell tower rises above the roof of the nave. 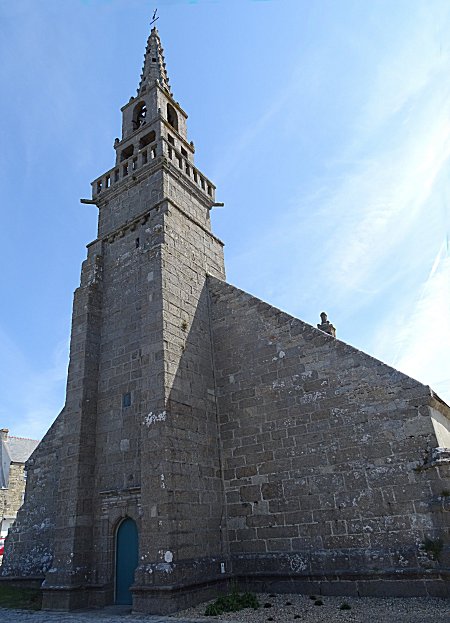 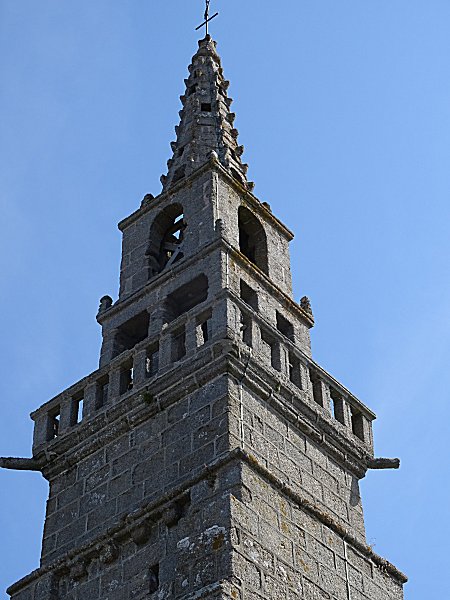 The side porch, very simple, has an ogival arch. 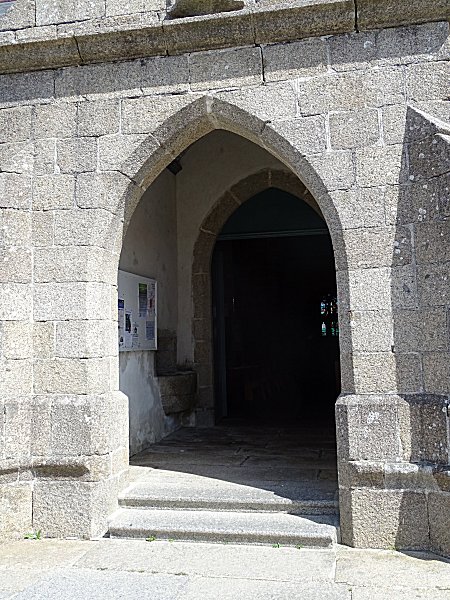 It is surmounted, in a niche, by a statue of Saint Peter holding a key. An escutcheon is engraved at his feet. It blasons Mi-parti, in 1 Or in three fess wavy Azure in a franc canton charged with ermines, in 2 palé Or and Azure. This indicates the union of the The inscription on its base indicates that this statue comes from the manor of Kerenneur in Plourin. It was donated to the Porspoder church by the owner of the mansion, the Marquise de Poulpry, in the XVIIIth century. One can see on this website, on the page concerning the manor of Kerenneur, the arms of Kergadiou and Kerlozrec. Kergadiou and Kerlozrec, owners of the manor of Kerenneur in the middle of the 16th century. 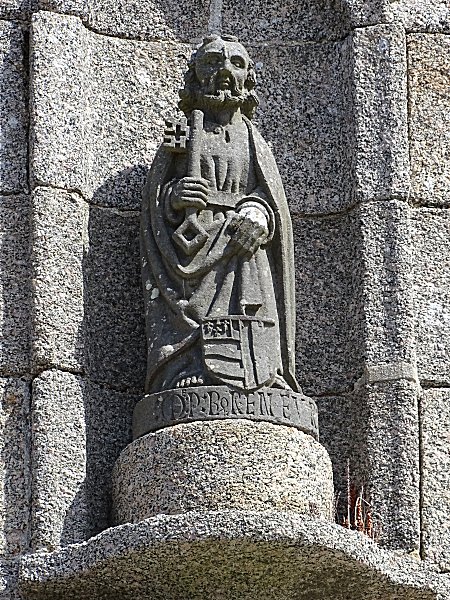 The base reads Me:P:K-RENEVR.
The colon is read DE and the K with the crossed leg is read KER.
It is obviously the name of the donor, the Marquise de POULPRY de KERENNEUR.

Coming from the ruined chapel of Kerenneur, this kersanton statue, too small for the niche it occupies here, was raised on a second granite base. We can therefore think that it took the place of an old statue, probably of Saint Budoc, which was already disappeared in the 18th century.


The nave has six bays flanked by aisles delimited by semicircular arches. Between the 4th and the 5th span, a diaphragm arch supports a wall above which the small bell tower is erected outside of the roof.

Under the barrel vault, we notice that the six An « entrait » is a horizontal beam that maintains the spacing of the frame « entraits » are painted with scrolls that seem to imitate waves. They are carved at each of their ends with dragon heads seemingly swallowing the « entrait » in their mouths « engoulantes » which seem to emerge from the lateral sandpits. We often find in Brittany, but also in other regions, swallowed beams supposed to represent Evil (the Leviathan serpent of the Bible) as crushed under the weight of the roof of a sacred building, and trying to swallow the enormous beams of the building's framework. In the Iroise's country, you only see them in this church. Those of Kersaint's chapel having lost their polychromy.
Kersaint Chapel

Two large paintings adorn the south wall. Although they are not well lit, they deserve to be mentioned.

They are two large paintings of 1.40 m x 1 m for the first, 1.40 m x 1.20 m for the second, offered to the church in fulfilment of a vow made during a terrible storm, one in 1768 and the other in 1771 The dates 30 November 1768 and 6 December 1771 are written according to the old way of abbreviating the names of the last 4 months of the year. Our names of months are indeed inherited from the Roman republican calendar which began with the ideas of March considered then as being the spring equinox. July and August were later named Julius ( Caesar) and Emperor Augustus. Only September, October, November and December have kept a name recalling their rank from March. Hence the abbreviations 7bre, 8bre, 9bre and Xbre. one in 1768 and the other in 1771.

In the first case, Captain Masson directed the Marie-Josèphe, a large topsail cutter built for coasting trade. With its mainsail and staysail torn, the sailboat only had its jib to avoid falling prey to the elements. In the upper left corner, the bishop could be Saint Nicholas of Myre, patron saint of sailors.
The other ship is a large square sailed brig with two masts and built also for coasting trade. Only the foresail still floats in the wind and has been torn like the topsail of the main mast. In a worse situation than the previous vessel, it became ungovernable.
These paintings are obviously works of the same artist. They were originally exhibited in the church chancel. But they were moved around 1870 and removed in 1962 to be handed over to the families of the descendants. In 2011 and 2014, after restorations, they were able to return to the church thanks to the action of the municipality.

The oldest are the two stained-glass windows of the chancel and they date only from 1899. They are the work of master glassmaker Gilbert Felep of Landerneau. Both relate to the life of Saint Budoc to whom the church is dedicated. 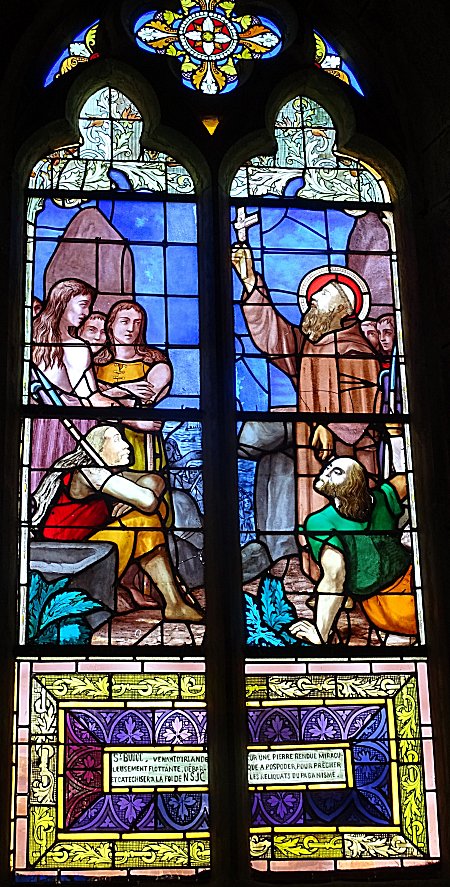 According to tradition, Saint Budoc would have came from Ireland at the time of collapse of Roman Empire and reached coast at Porspoder in a stone trough.

The very name Budoc, or Beuzec, means "saved from the waters" in Breton. ( beuziñ = drown). According to legend, his mother Azénor, daughter of King Even of Brest, pregnant, was condemned on slanderous denunciation of her mother-in-law to be thrown into the sea in a barrel. Tossed by the waves for five months, she would have survived and reached the shores of Ireland where her son would have been born, It is interesting to note that this legend is probably inherited from the ancient Greek legend linked to the hero Perseus, the winner of Medusa Gorgon. This one, son of Zeus and Danae, the daughter of Argos King Acrinios, would have been thrown all baby in the sea, locked in a chest with his mother. Tossed by the waves, the child and his mother would have boarded an island and survived. As an adult, Perseus returned to Argolida, killed Acrinios and founded the city of Mycenae, the future capital of King Agamemnon, the instigator of the Trojan War told by Homer in Illiad. saved from the waters.
Having become a monk and priest, Budoc returned to Armorica aboard a sarcophagus to evangelize the land of his ancestors. After having stayed one year in Porspoder, he would have founded the parish of Plourin then succeeded Saint Magloire as bishop of Dol in 539. This event is illustrated by the second stained-glass window where we see the saint blessing Gallic warriors. 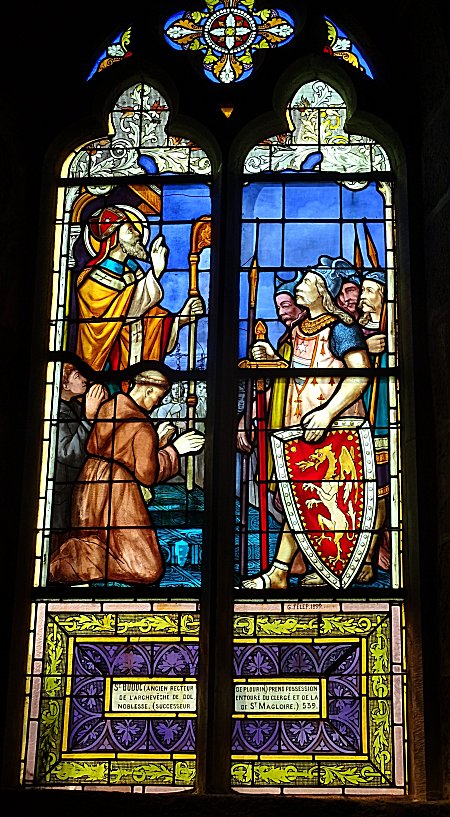 The other 11 stained-glass windows were made in Paris in 1933, on order of several donors, by the boxmaker Marc Choisnard and the master glassmaker Jacques Champigneulle. They illustrate miraculous events such as Saint Michael slaying the dragon or Saint Francis of Assisi preaching to birds in front of the wolf of Gubbio that he managed to convert.

The other scenes illustrate The miraculous fishing, the Holy Family, the apparition of the Sacred Heart and opposite, on the other side, The Virgin appearing to Bernadette, the Virgin and her mother Saint Anne, St. Joan of Arc, St. John the Baptist baptizing Christ, St. Teresa of the Child Jesus as well as the death of Salaün-ar-Foll the innocent Folgoët on whose tomb a lily is already growing. 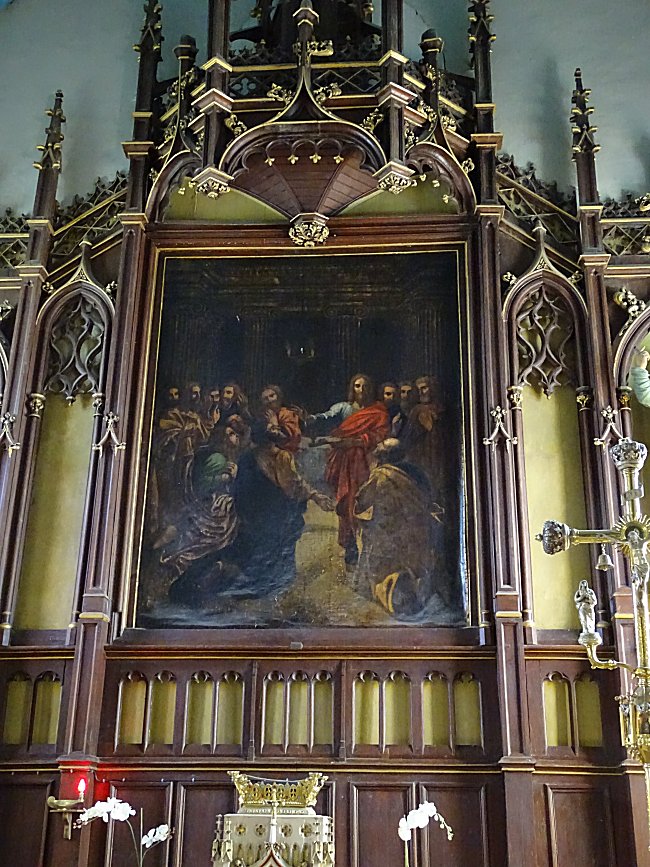 The interest of this high altar lies in the central panel where Christ is seen holding a chalice in his right hand and a bread in his left. It illustrates the institution of Eucharist. It is in fact a copy of a painting by Nicolas Poussin commissioned in 1641 by King Louis XIII and kept at the Louvre Museum. Below the painting of the Louvre then the copy of Porspoder which differs from it by some details which you will take pleasure to seek.


The Altar of the Rosary

This richly decorated Renaissance altar probably dates from the XVIIth century. It was offered to the church of Porspoder by the Brotherhood of the Rosary.
The rosary is composed of 15 tens of tiny grains, each of which corresponds to a Ave that the faithful must recite. Larger grains separate the tens of small grains and correspond to Pater noster. At each of these, the reciter must observe a moment of meditation. The altar allows him at this moment to fix his attention on the religious event of his choice. 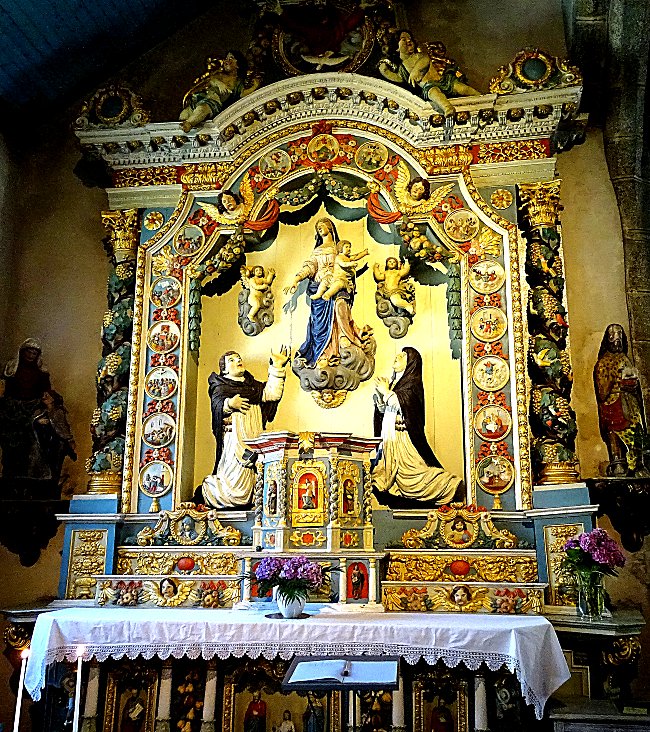 Very colorful, this altar represents the Holy Family in the center. All around, 15 medallions symbolize the mysteries of the Rosary. Starting from the bottom left and going up to go down on the right, we can discover : The Visitation, the Nativity, the Pentecost, Jesus in the midst of the doctors of the Law, then in the Garden of Olives, the ascent to Calvary, the Resurrection, the Ascension, the Crucifixion, the Flagellation, the Coronation of the Virgin, the Coronation of thorns, the Assumption, the Presentation at the Temple and finally the Annunciation. As you can see, these medallions do not follow any chronological order. This voluntary disorder forces the reciter to look for the next medallion and thus to keep his attention.

In addition to the small statue of Saint Peter which watches the entrance of the porch, the church presents several other works :
In the chancel, we recognize again Saint Peter, on the left, and on the right Saint Paul carrying the sword that will decapitate him.

And against a pillar a beautiful statue of Saint Nicholas of Myre with the children saved from the salting place, accompanied on the opposite pillar by that of Saint Margaret of Antioch trampling at her feet the dragon who would have swallowed her. We only regret that the safety straps are so obtrusive.

The organ builder Jean-François Dupont has built in Caen in 1986 this modern organ will also be worth a look. 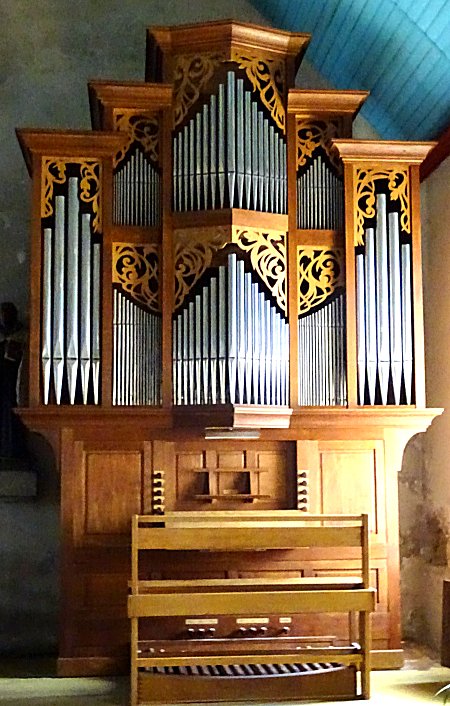 
Documentation: Canon H. Pérennès Porspoder, descriptive note , Le Mans 1951, as well as the work made by Mrs Tahier available to the public in the church.

-1- This painting by François Perhirin is available for sale. Contact Mr. Bernard ROBERT :