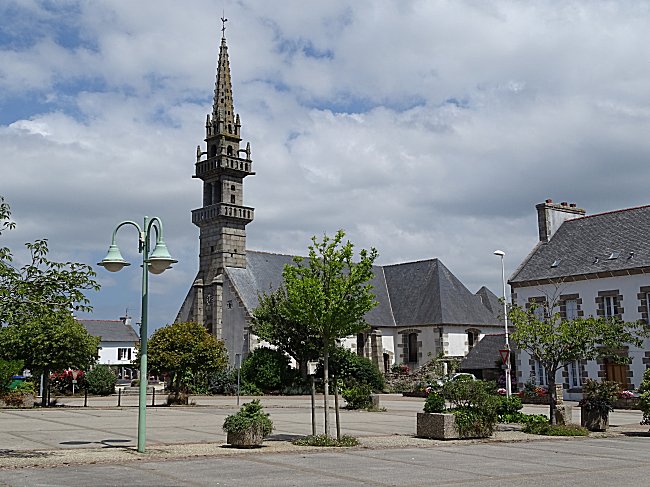 Access : Locmaria-Plouzané, alias Lanvénec, is a separate commune of Plouzané, situated 2 km north of the road linking Brest to Le Conquet. Coming from Brest, leave the Conquet road at the interchange towards Locmaria-Plouzané/Trégana ( signs) or at Kerfily.
Park near the church in the large car park whose entrance is between two Christianized stones1.

Included in a parish enclosure, the church is surrounded by the graves of the cemetery. It is a Latin cross-shaped building, with an apse with cut sides. It dates from 1769 and was built by Saffrey, king's contractor at the port of Brest. At that time, Locmaria-Plouzané being only a truce of the parish of Plouzané, the works were carried out under the direction of Jean-Claude Inizané, rector of Plouzané. 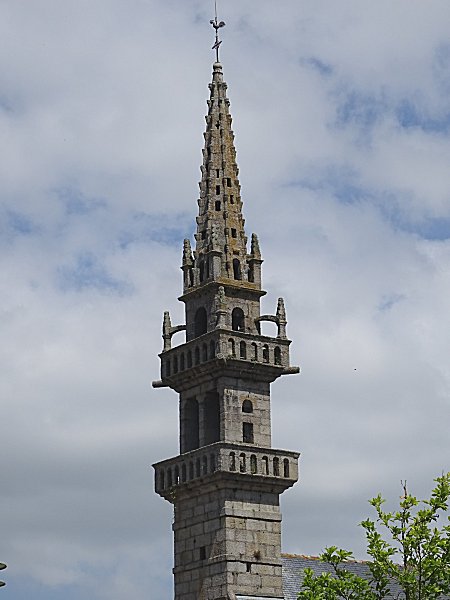 The built-in bell tower has two galleries each opening onto a bell room. The second gallery is decorated at each corner with a pilaster held by a buttress arch. An octagonal, hooked, openwork spire framed by four pilasters completes the construction. 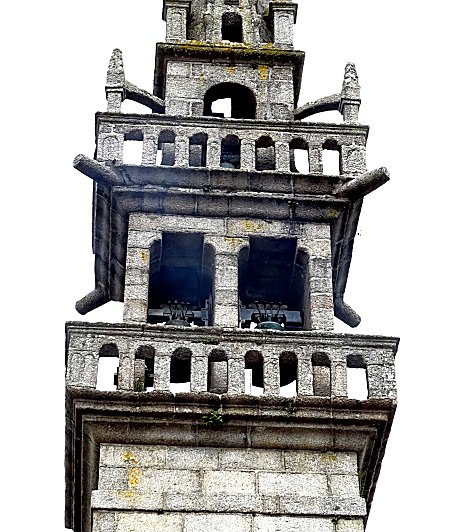 It will be noticed that, as on several other steeples of the surroundings, stone guns are placed under the second gallery.
( Iroise's guns ) 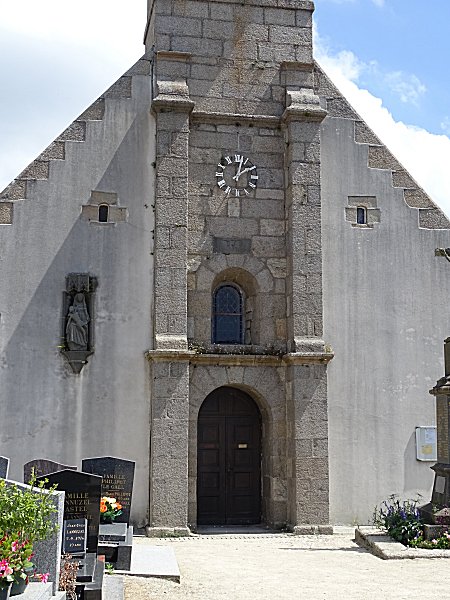 The main gate is framed by two buttresses built in 1773. It has no ornamentation. On the left, however, one will notice, in a niche, an ancient Pietà of the XVth century in kersanton stone. It could have come from the previous church.

On the left, a small unidentified character seems to watch over the Virgin and Christ.

One enters the building, on the right, by a side door. The nave, whose vault is panelled, has no aisles. 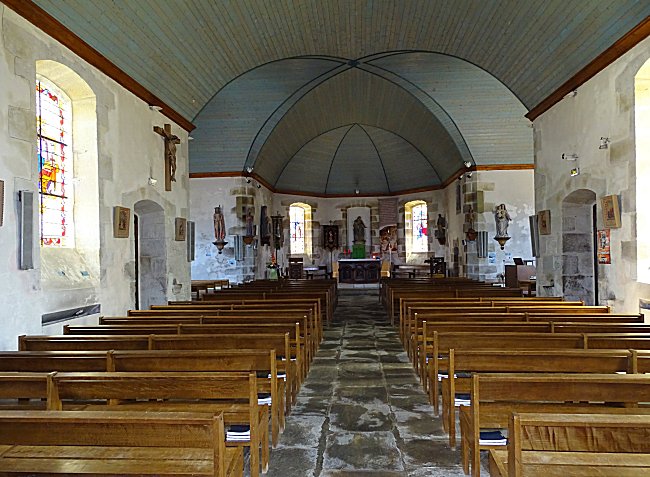 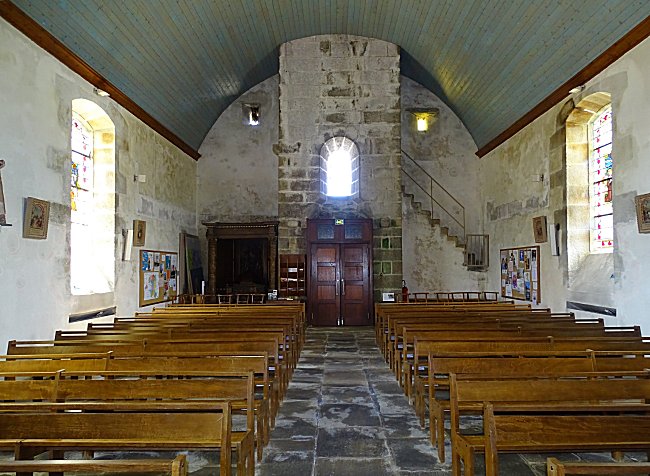 It is necessary to approach the main gate to discover the very beautiful baptismal font. 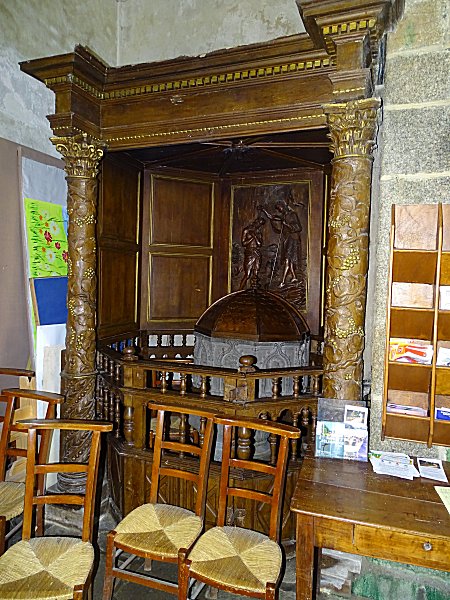 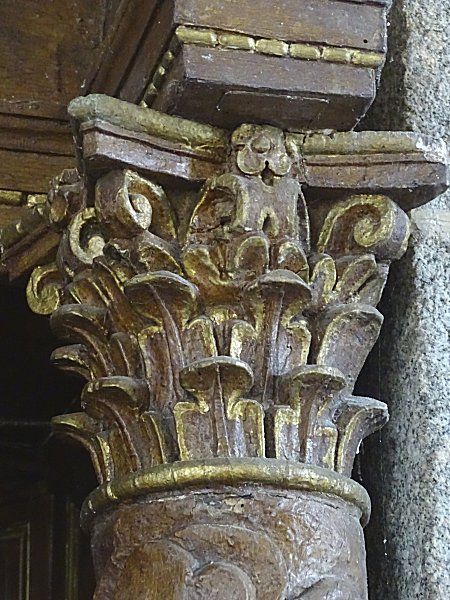 Behind superb carved columns, enhanced with gilding, and a wooden balustrade where the craftsman Jacques Jac engraved the date of 1675, thrones the octagonal baptismal font in kersanton. Its sides represent in bas-relief an Ecce Homo as well as the Evangelists. Its date of manufacture can be read at the back: 1530. 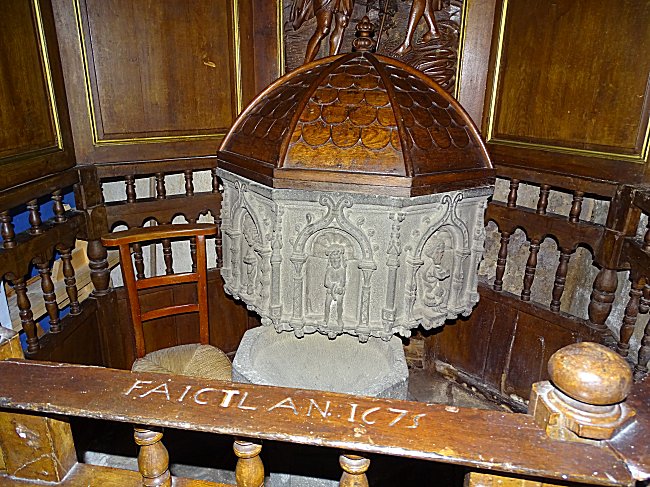 On the walls of the nave are the stations of a Way of the Cross... 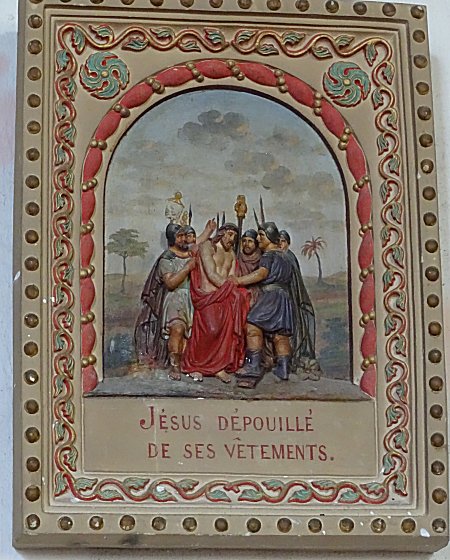 ...and an enigmatic kersanton statue of an unidentified saint holding a book. Maybe an evangelist ? Maybe Saint Sané ? According to local tradition, this Irish monk reached land at Plougonvelin at Vth century, with some companions, on the beach of Perzell, at the bottom of the point of Bertheaume. It would have converted into Christian sanctuaries the pagan temples of the Lucos forest, at the very emplacement of the present Locmaria-Plouzané's church. For centuries, this forest, under the name of Pardon's Wood, Coat at Ch'ras, served as a refuge for all those who were hunted. The two Christianised menhirs in the car park would have marked the entrance to the forest. Saint Sané is also the patron saint of the town of Plouzané, in the centre of which he is said to have made a spring gushed out. He died as a hermit around 485. This statue, which comes from the cemetery, has been replaced in the nave.

In polychrome wood, the statue of Saint Méen below probably dates from the XVIIth century. It was found buried in the ground of the nave during works.

Like Saint Samson, whose tradition is that he was one of the disciples, Saint Méen was a monk from Wales who settled in Dol in the VIth century. Having benefited from an important donation of lands in the Armoric centre, he had built a monastery there on the current commune of St-Méen-le-Grand. He is reputed to cure leprosy and skin diseases.


The stained-glass windows of the nave are not signed. They seem to come from a master glassmaker's workshop different from those of the transept and the chancel and date from the beginning of the XXth century. 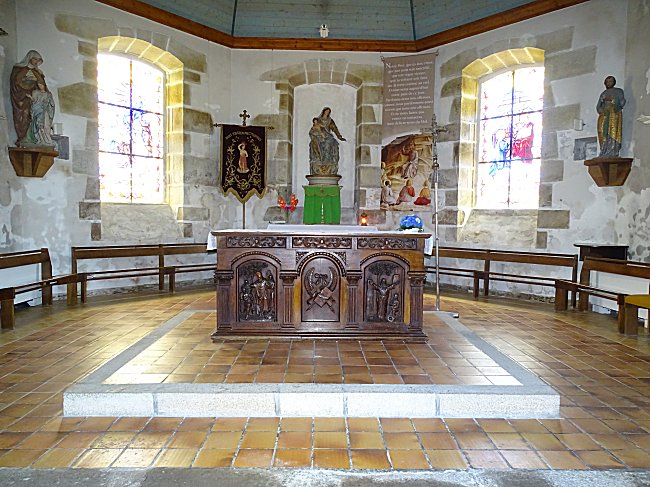 A beautiful carved altar stands in the middle of the chancel.

Its carved panels which were recovered of the old pulpit to preach recall the legend of Saint Sané. He is seen on the left baptizing a new convert and on the right preaching in the Pardon's Wood.

In the center, behind the altar, is presented a beautiful Virgin and Child, seated, in polychrome wood from the XVIIth century. 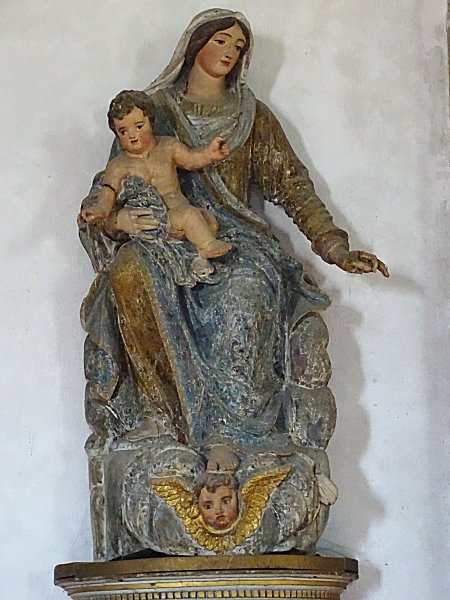 Called Notre Dame of Lanvénec, she is the patron saint of the church. It is framed on the chancel walls by two plaster statues from the end of the XIXth.

A superb polychrome wooden Pietà of the XVIIth century decorates the north wall. The Blessed Virgin's face is full of pain and dignity. It's definitely a real masterpiece.

The stained-glass windows of the chancel are both dedicated to the Virgin. They become from the workshop of the master glassmaker Emmanuel Rault, in Rennes and date from the beginning of the XXth century.

The two wings of the transept also have interesting elements. Northern wing of the transept 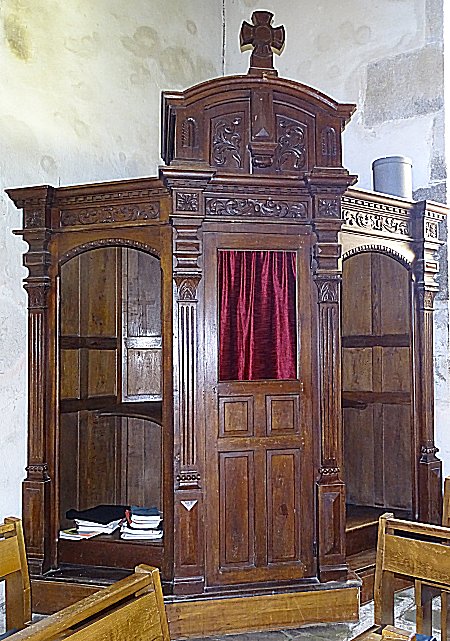 Facing each other, the two stained-glass windows refer to the legend of Saint Sané.

The three statues in the north wing attract particular attention.

As in the churches of Brélès and Tréouergat, a statue represents the archangel Saint Michael, winged, overthrowing paganism with a human face. The archangel is dressed like a Roman centurion and the flames of hell are already licking his victim.
The statue of Christ represents him when he is delivered to the crowd after his judgment. These two polychrome wooden works date from the XVIIth century.

The third statue, in polychrome wood from the same period, represents Sainte Marie-Madeleine. With one hand she shows the perfume vase and with the other her hair with which she would have anointed Christ's feet.

Opposite, in the south wing, there are still two ancient female statues that we will not fail to admire and whose resemblance we see. In polychrome wood, they probably come from the same workshop and would date from the XVIIth century .

As we leave the enclosure, we can take a look at the mutilated calvary that keeps the exit. One recognize the Ecce Homo already represented inside the church. 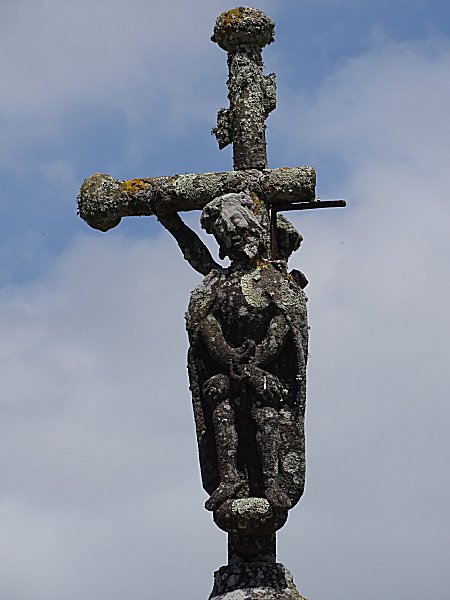 See the section of this website : ( The guardians of the Town Hall square ) 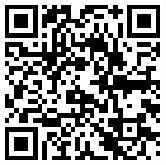