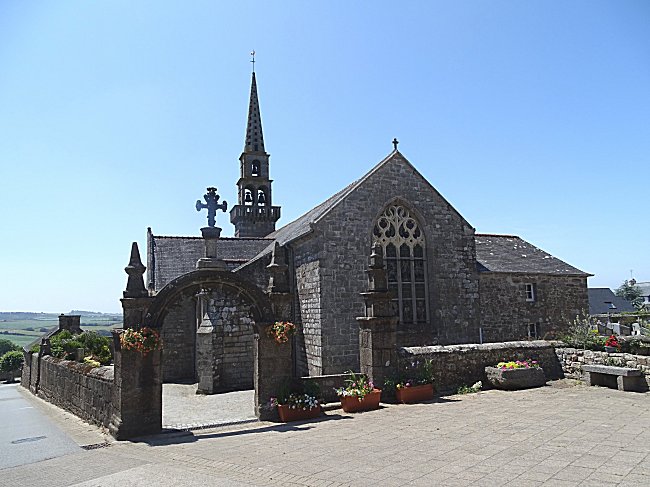 Access : From St-Renan, take the D27 which runs along the COMIREN lake. It leads directly to Brélès. Park on the right in front of the church.

Brélès, which was once a truce of the parish of Plourin-Ploudalmézeau, became an autonomous parish in 1802, following the Concordat signed between Napoleon and the Pope the previous year. Its church, once a simple chapel, is one of the few in the Pays d'Iroise to have kept its parish enclosure. In addition, a monument in the shape of a triumphal arch indicates the entrance. 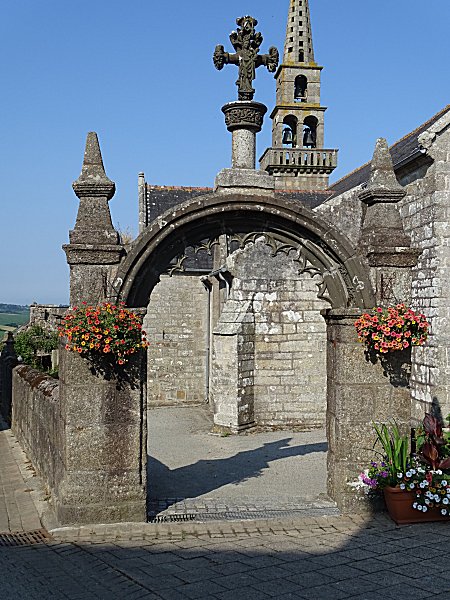 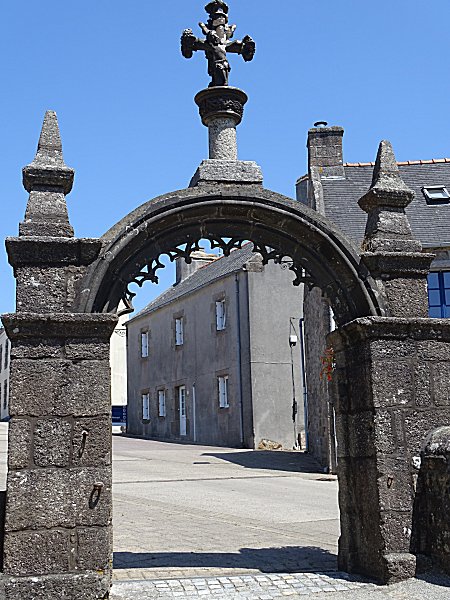 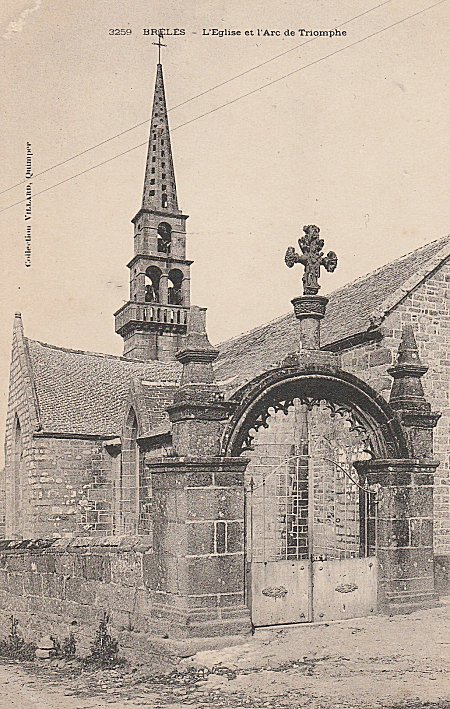 The parish enclosure was closed for a long time by a metal gate.

The work supported by two large pilasters has a semicircular arch decorated in its lower part with trilobal openwork teeth. It has been rebuilt as shown by two superimposed inscriptions incorporated in a neighbouring pillar, to the right of the stile1. 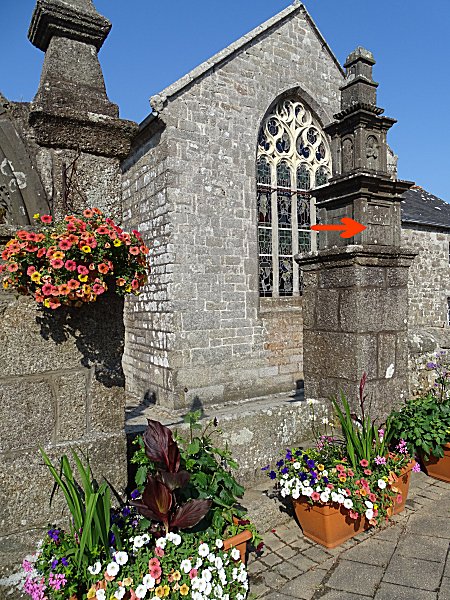 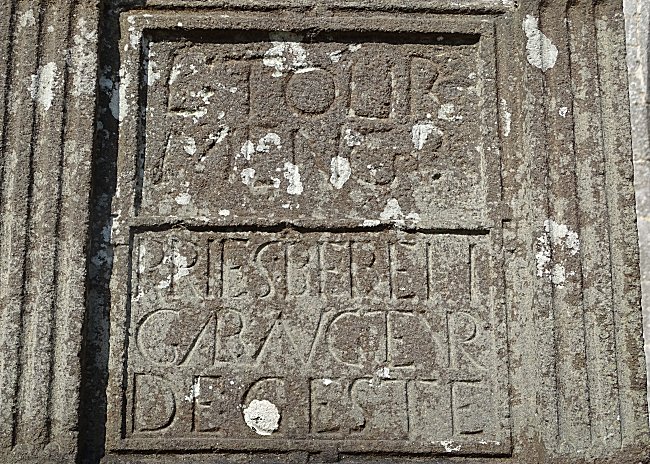 The upper inscription is the most recent. We read:

Louis Tourmen was from 1763 to 1791 governor-rector of what was still only a chapel. He thus signs there a reshaping of the triumphal arch which he had carried out a few years before the French Revolution.

Then comes the original dedication:

Pray for Francis of Keringar, author of this (bow). François de Kéringar, lord of Bel-Air, had already a dedication engraved at the entrance of his manor in 1599. The work thus dates from the very beginning of the XVIIth century.
At the top, a kersanton crucifix shows on its reverse a Virgin and Child between two angels, under a Gothic canopy. We thus know from the entrance of the enclosure that the site is dedicated to Notre-Dame. 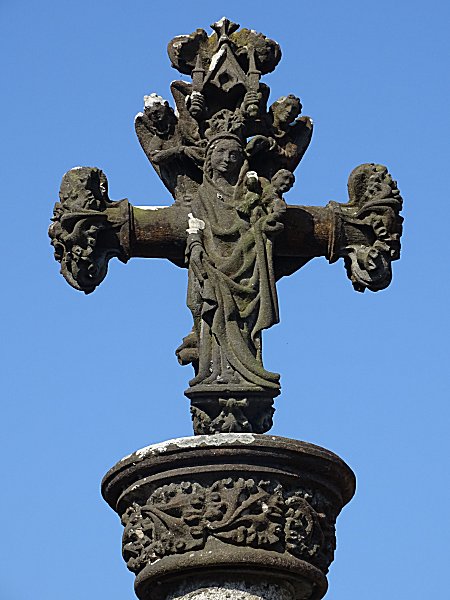 The church is a Latin cross-shaped building some parts of which date back to the late XIVth century. It had underwent several transformations including an enlargement starting in 1855. The gallery of its bell tower is surmounted by two floors housing the bells, extended by an openwork spire of octagonal section. 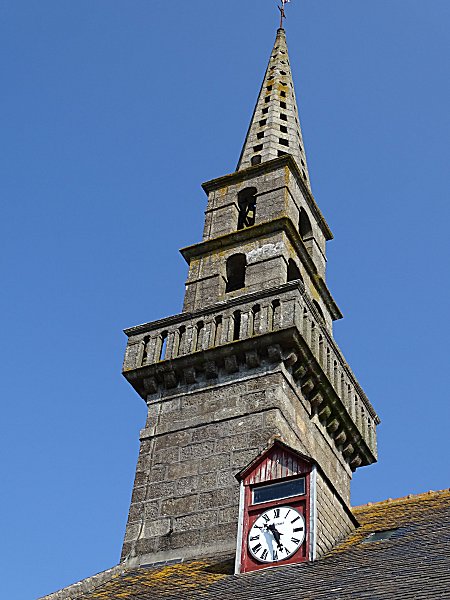 One will notice its gothic portal delicately worked in the stone of kersanton. 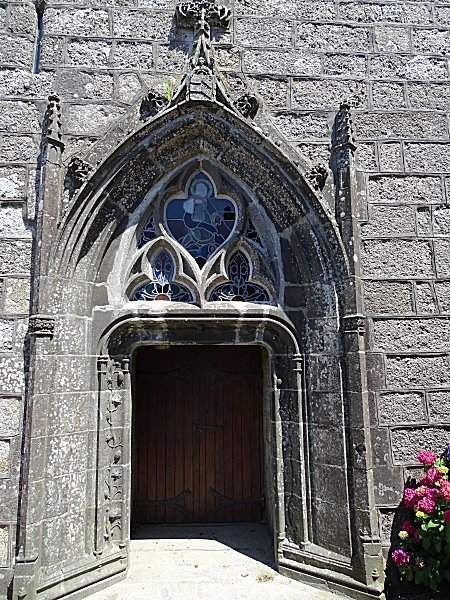 It is decorated with the coat of arms of Olivier du Chastel and Jeanne de Ploeuc who were married, perhaps in the newly built chapel, in 1408. This great lord of Tremazan was chamberlain to the Duke of Brittany and captain of Dinan and Brest. Originally, these coats of arms presented by an angel were painted in bright colours. To the left the Du Chastel, to the right the Ploeuc.

The usual entrance to the church is on the south face. It also has an ornamentation in kersanton surmounted by a fleuron. One can only regret that, during its installation in the XXth century, the neighbouring gutter was not concealed. 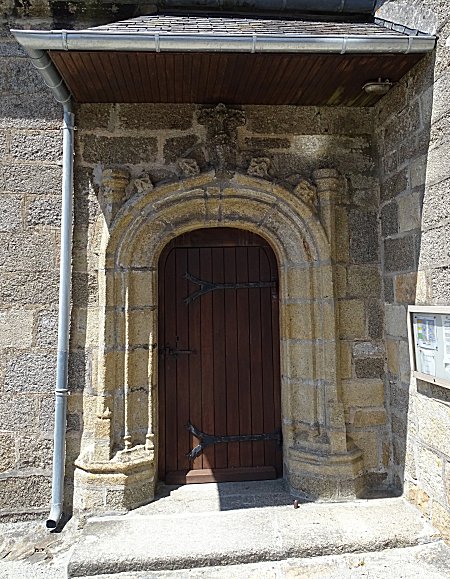 The nave, separated from the aisles by neo-gothic arches, is formed by five bays. At the fourth, two side chapels were built to serve as a transept. A large grandstand surmounts the entrance through the large gate. 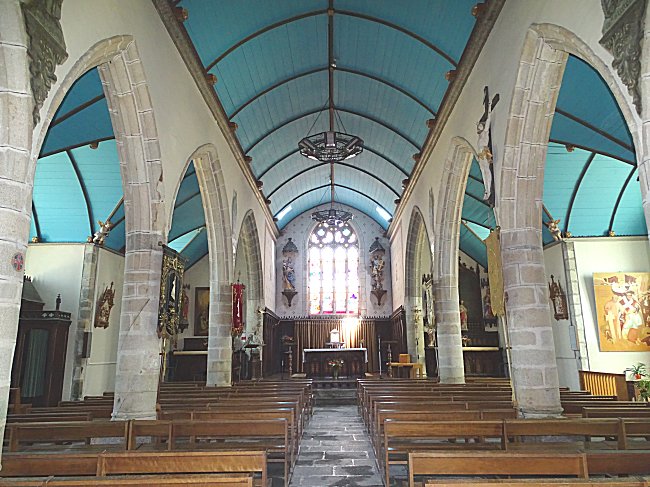 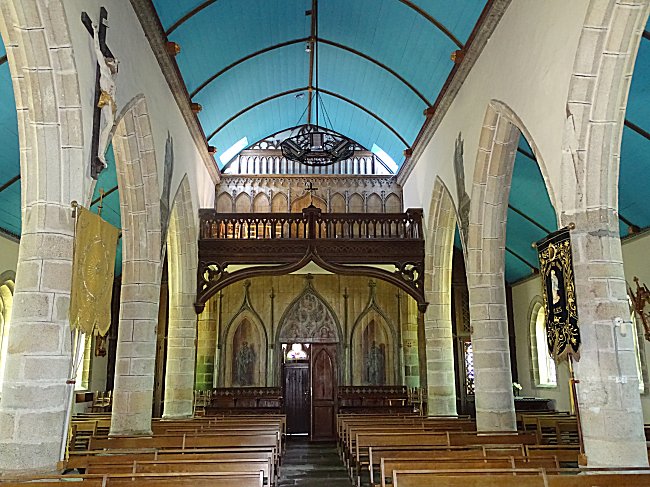 The Gothic tribune is illuminated by openings in the vault.

Looking up at the four corners of the transept crossing, we discover under the barrel vault the original presence of musical little angels. These amusing polychrome wooden sculptures constitute a divine bagad that brightens this solemn building.

Above the chancel, two other angels, curiously without wings, lend under the vault an ear attentive to the divine music that only they seem to hear. Do they beat the measure? One of them lost an arm.

The chancel has a flat chevet. Its ornamentation is sober. 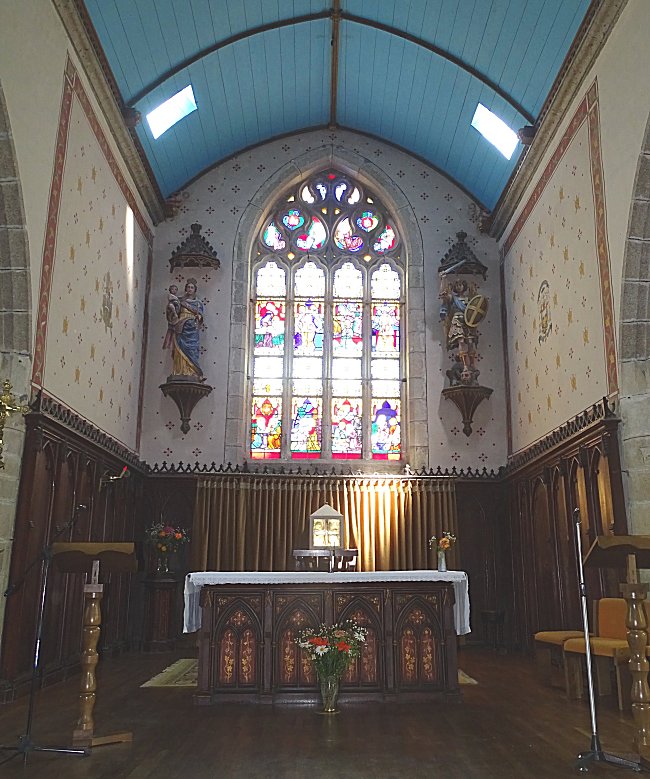 It is illuminated by a large stained-glass. Its eight panels are dedicated to the Virgin whose main episodes of life they evoke. In the centre is the name of François-Marie Bervas, rector of Brélès from 1872 to 1885 and sponsor of the stained-glass window. 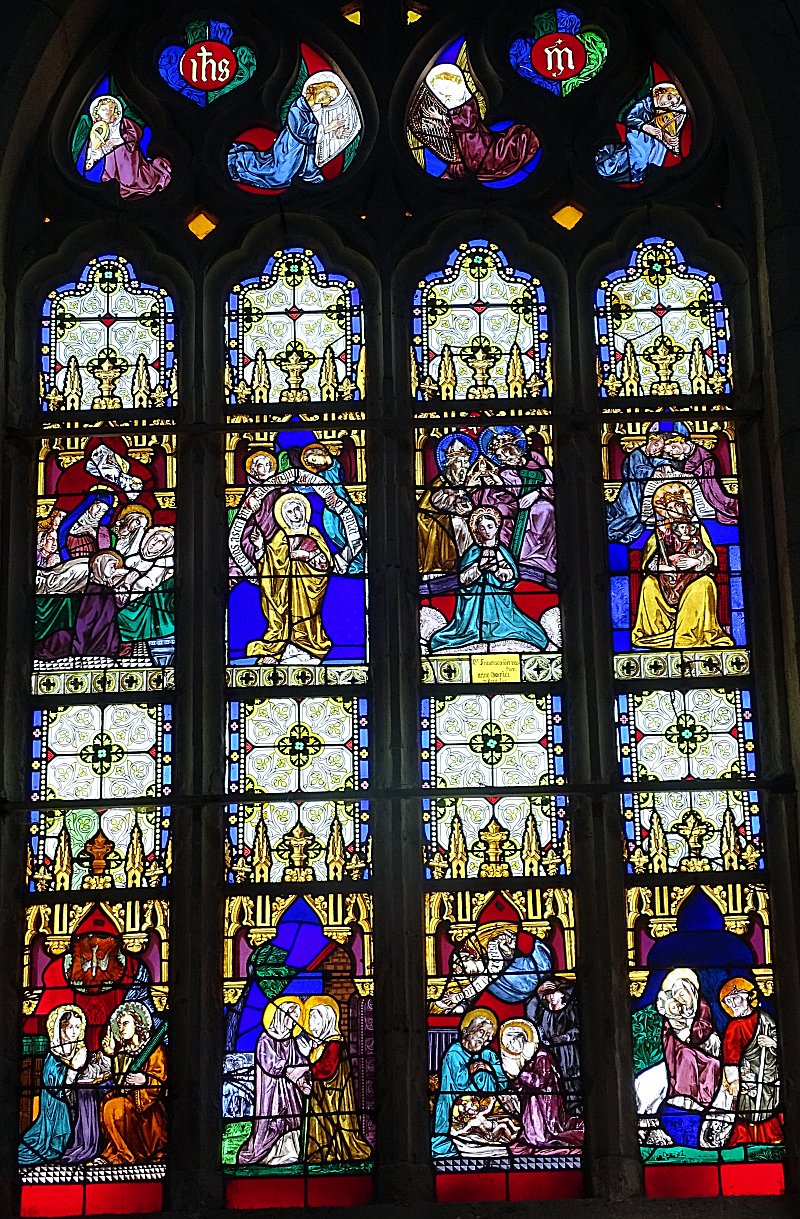 At the tympanum of this large stained-glass are represented four new angels who play the fiddle with a bow2 or pinch the strings of an ancestor of the harp.

Two statues frame the stained-glass window. On the left, a polychrome wooden Virgin and Child has undergone an awkward restoration on Christ's arm. 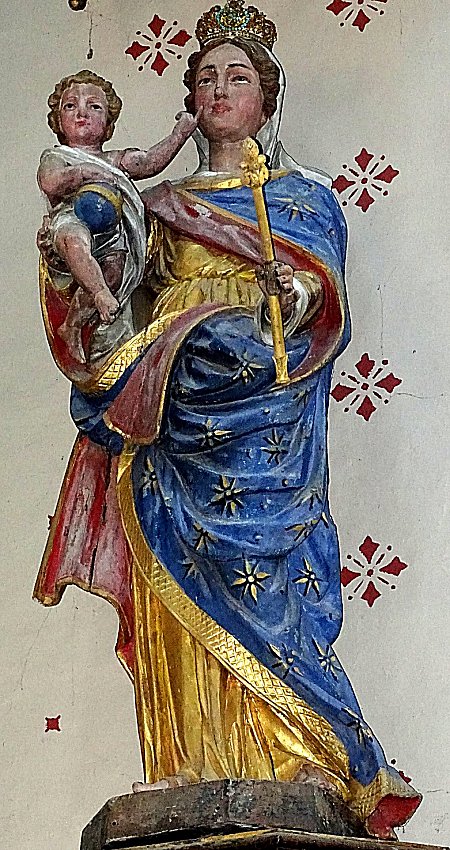 On the right, an angel in a Roman centurion's outfit tramples a monster with a human face underfoot.

A winged angel knocking down a monster, one immediately thinks of the Archangel Saint Michael. The monster he kills represents paganism. You will notice his face with horns, one of which is broken. This beautiful polychrome wooden statue recalls that of the church of Tréouergat.

The walls of the chancel are painted to imitate a tapestry. On one side the coat of arms of the Pope and on the other side those of the Bishop of Quimper during the consecration of the newly enlarged parish church...


Still in the chancel, we will not fail to admire the superb polychrome wooden angel-lutrin perched on a pretty pedestal. The two frames he presents, one in front of him, the other on his wings, are intended to support religious song books. 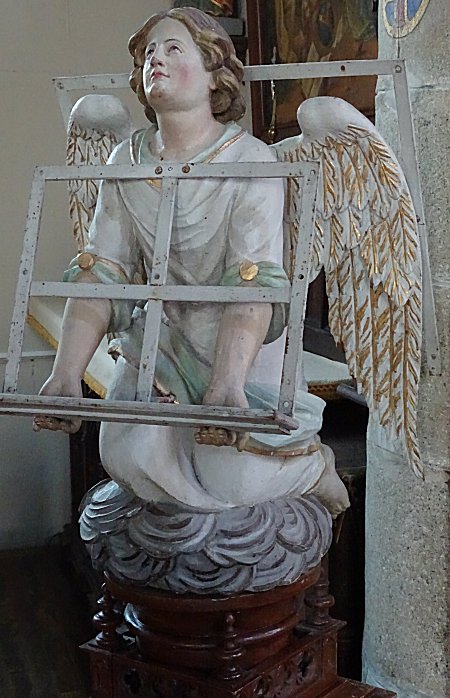 On the right stands the Sacred Heart Chapel. 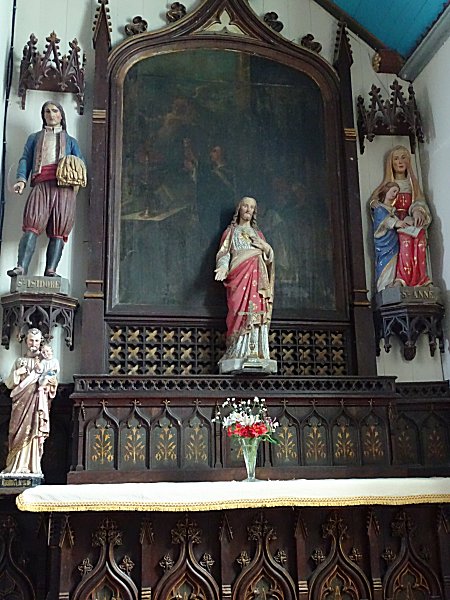 Two of his statues, in polychrome wood, deserve a stop.

All the way to the right, Saint Anne. The mother of the Virgin, always represented veiled, teaches her daughter to read in a prayer book.
To the left, Saint Isidore. This modest Spanish peasant holding a sickle and a sheaf of wheat is represented here in an elegant Breton costume. Note the blue jacket decorated with embroidery and worn open on a white vest from which protrudes only the collar of the shirt. At the waist, a belt made of a long red scarf covers the top of her bragou braz which is tightened at knee level with a red ribbon. His gaiters close laterally by large copper buttons and come to wrap the top of his shoes.

On the other side of the chancel stands the chapel dedicated to Saint John and Saint Sebastian. 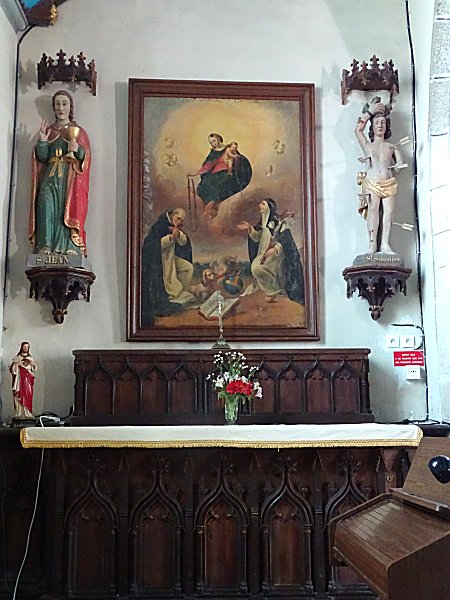 There too, framing a painting representing the arrival in Armorica of the monks from across the Channel, two statues attract the eye.

On the left, the apostle Saint John. He is represented holding a chalice to recall that he described the Lord's Supper in great detail in the gospel attributed to him.

On the right, Saint Sebastian, Christian martyr of the end of the IIIth century. According to his hagiography, he was riddled with arrows by the soldiers of the imperial guard he commanded, on the orders of the Roman emperor Diocletian.

At the back of the nave, behind the stalls stored under the gallery, we discover Saint Peter and Saint Paul :

The visitor leaves the church of Brélès with the feeling of having discovered some very interesting new elements of Iroise's heritage. And perhaps also the desire to come back, on a festive evening, to check if these bombarde and biniou tunes that we hear from afar would not come by chance from a small divine bagad hiding behind the walls of the parish enclosure...

-2- This sort of bow fiddle is the ancestor of the hurdy-gurdy.

Thanks to Michel MAUGUIN who carried out heraldic researches on the territory of the commune of Brélès and kindly communicated them to us to put them below at the disposal of the Net surfers. 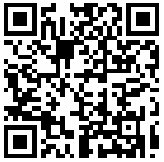