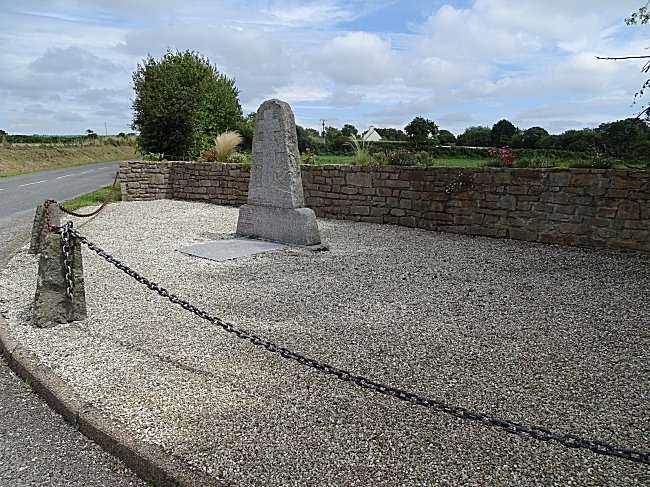 This commemorative stele which borders the road connecting Guipronvel to Tréouergat does not attract the eye. Yet it is one of the few testimonies to the violent fighting that took place in 1944 in the region during the Liberation. Because it is very close to there, in the woods and fields of Kergoff, that one of the most important maquis of Finistère was formed, gathering about 1200 fighters.

Access : From St-Renan, take the direction of Ploudalméseau. 2 km after crossing Lanrivoaré, turn right onto a small road until you reach the village of Tréouergat. Go around the church and follow the direction of Guipronvel. Located at the junction of a small road, the stele is 500 m on the right side.
If you follow this small road, you will reach, 2 km further on, the old Kergoff farmhouse, which has now been completely renovated. 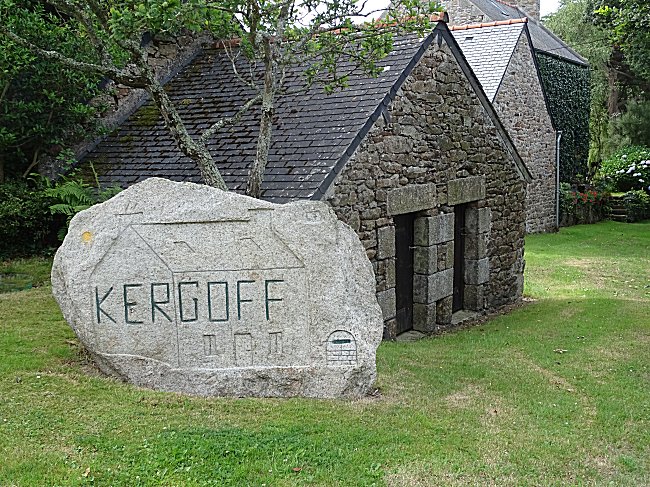 The military port of Brest, the banks of the Brest Channel and the entire coast of the Iroise Sea were densely fortified by the Germans during the Occupation. After the landing on June 6, 1944, this entire area was an important objective for American troops. But they needed help and called on the networks of local Resistance fighters.
Under the direction of the notary of Ploudalmézeau Henri Provostic, known as "Benoît", and the gendarme Joseph Grannec, known as "Joseph 351", a battalion of Maquis had been formed, constantly growing following the appeal for a general insurrection on August 3. He gathered volunteers from all over the region and was in contact with American troops... 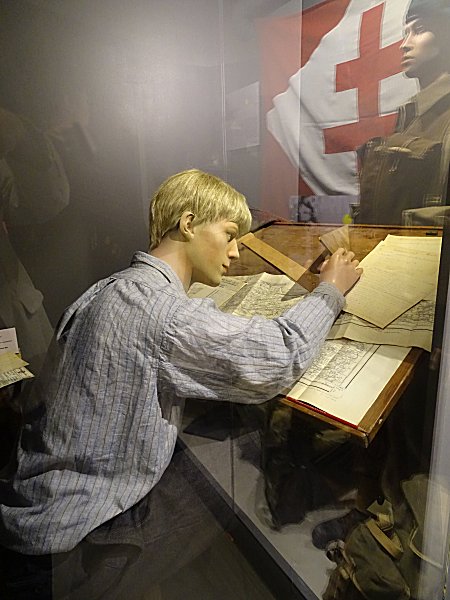 A Resistance fighter collects intelligence
and transmits it to the Allies by radio.
Historical reconstruction presented
at the "Musée Mémoires-39-45" in Plougonvelin ( museum visit ).

In total, during the summer of 1944, 1074 men and women gathered at the Kergoff farm and its immediate surroundings, in the middle of nature, sheltered by thick woods far from the coast and important roads. A company of Russian Osttruppen1 soldiers, deserting the German army that had forcibly recruited them, joined the battalion on 8 August, bringing the total number of fighters to over 1200. They brought with them their individual weapons and ammunition, as well as about ten mortars and three 37 mm cannons.

In his book "1940-1944, La Résistance dans le canton de Saint-Renan" (cover photo below), its author Jo Gentil describes the members of the maquis of Tréouergat, when, in the morning of 17 August 1944, his Plouzané's group joins them :

"The show in Kergoff surprises them. Indeed, a thousand men are gathered in the courtyard and buildings of the farm.
Vehicles of all types, marked with the three colours and the FFI2 sign with the Lorraine cross are parked in the neighbouring field. The Resistance fighters, dressed in disparate uniforms or a work uniform, all wear the FFI standard armband. They are busy, checking their weapons or making morning coffee.
Closer, in a corner of the courtyard, two Resistance fighters, machine guns in hand, watch a group of hair shaved women, guilty of collaborating with the Germans. Not far from there, in a large shaded meadow, a company of Russians from Ukraine, rallied to the FFI thanks to the action of Madame Douillard, wife of an Admiral retired to Argenton, herself of Russian origin, made her horses drink from the stream below."

Several tons of weapons had already been parachuted into the Kergoff Maquis on August 2 by the Americans. Joining the other FFI units in Finistère, and alongside the 29th American infantry division and the 2dRangers battalion, these shadow fighters participated in all the fighting on the Atlantic Wall, from Aber Benoît to Brest, where the thousands of occupants of German fortifications had to be dislodged. The enemy was further reinforced by the arrival in Brest on 12 August of the 2dparachute division of the German General Ramcke who had fought in Libya in Marshal Rommel's Afrika Korps and who took over command of the entire garrison. Its experienced troops, under Hitler's order, defended Brest fiercely for 40 days until the final surrender on September 18.
The courage, enthusiasm and self-sacrifice of the Resistance Fighters were not without risks and many of them, whom the stele honours, lost their lives in battle or were deported. Gabriel Bizien, for example, an FFI agent with the "Quand Même" network in Ploudalmézeau, was arrested on August 6, tortured horribly and died in deportation, his eyes pierced by the Nazis.

The inscriptions on the stele 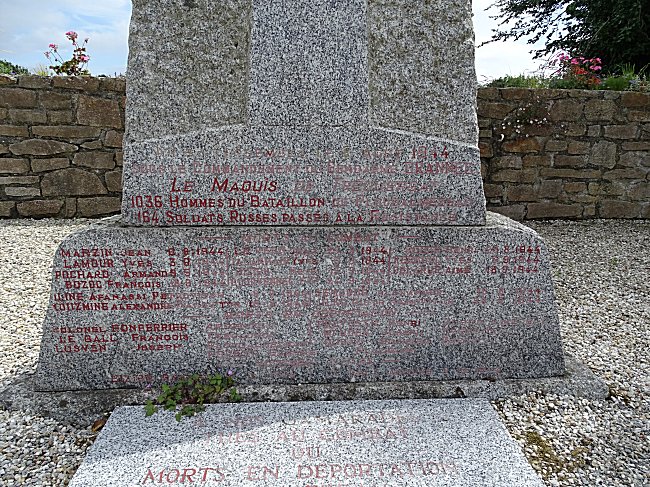 Some of the inscriptions on the stele have become barely legible. Here is their reading : 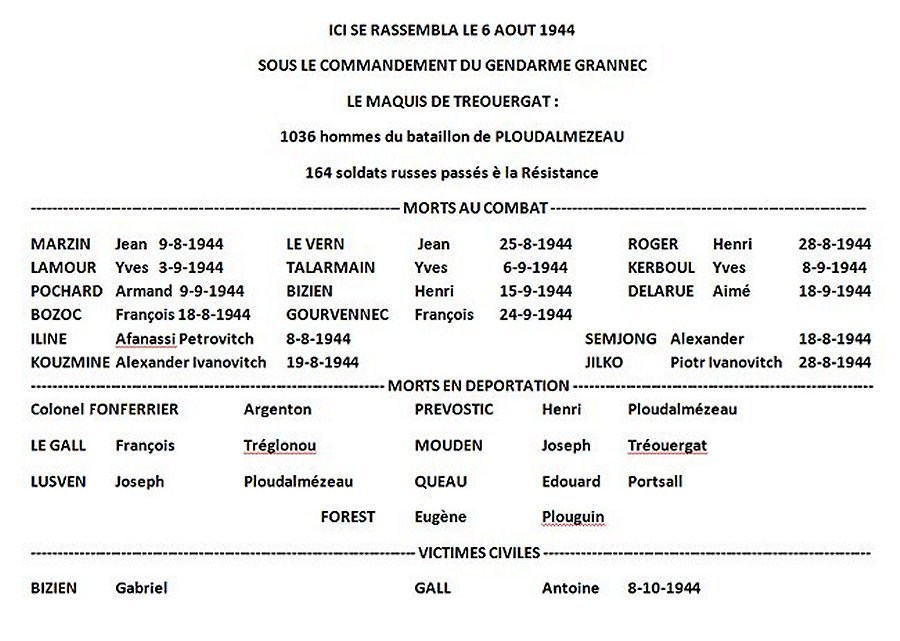 Later, a horizontal slab, also engraved, was layed. It is easier to read : "To our comrades killed in action or killed in deportation. FFI Ploudalmézeau, FFI St-Renan, in memoriam"
The names of :
G. BIZIEN, died for France on August 6, 1944, Charles JOURDE deported on July 9, 1943, and the inscription 1944 - 1994 indicating that the slab was deposited during the fiftieth anniversary of the Liberation. 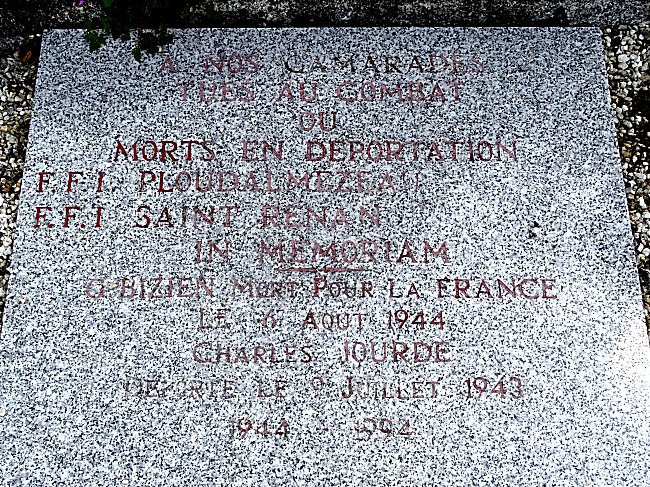 What about the memory of these fights today?
As time goes by, it must be noted that the memory is fading.
The memory was obviously very vivid in the years following the Liberation. The population was grateful to the Resistance fighters who had joined the Americans in large numbers to participate in the coastal fighting and the siege of Brest. Those who had driven the occupier away remembered those exceptional days and their fallen comrades-in-arms.

But time has passed, the former Resistance fighters and all those who have experienced the horrors of the Occupation have become fewer and fewer. The following generations could not have such a vivid memory. The commemorations of the battles of this period are currently the duty of remembrance of Veterans' associations whose oldest members were still children at that time. During the ceremonies, under the hats and caps, white hair dominates... 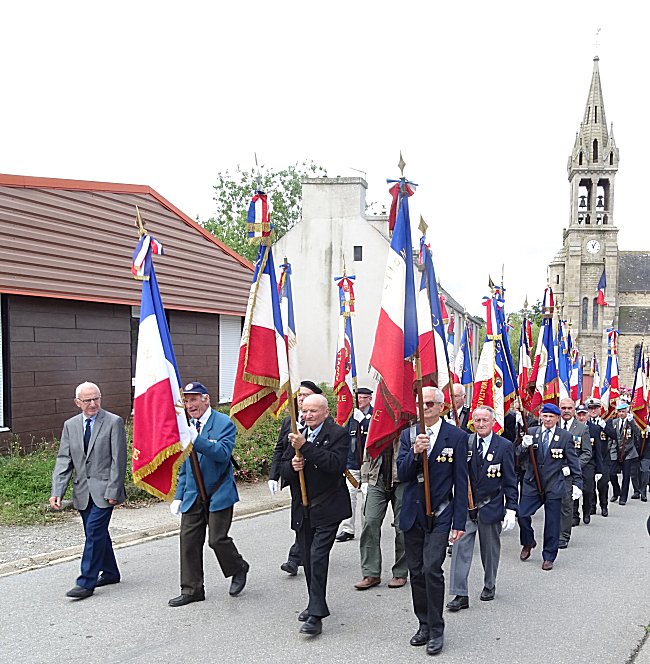 The commemoration of 30 July 2017 in Tréouergat 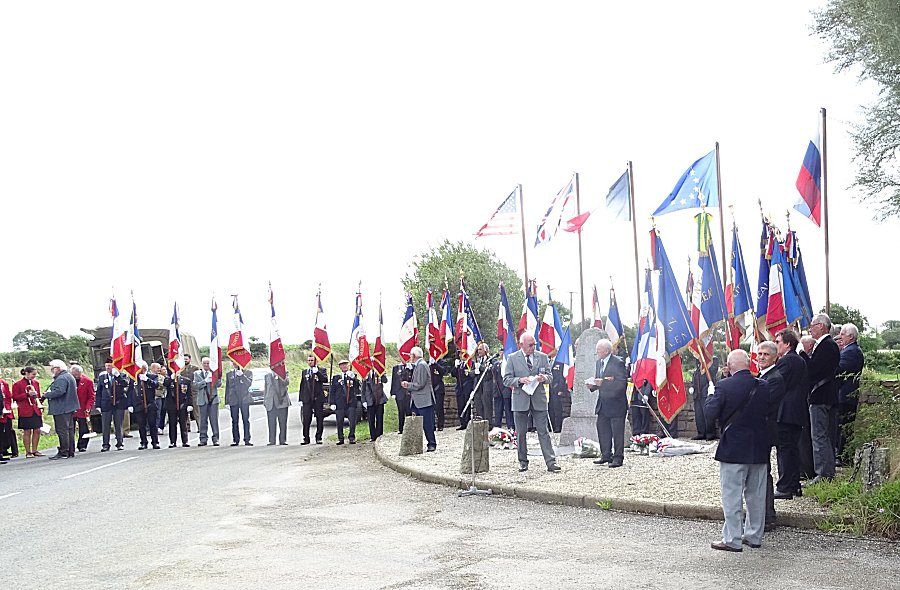 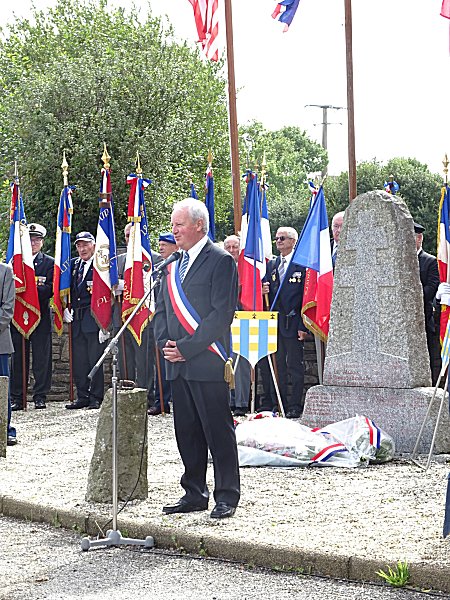 That the memory fades, even if it is regrettable, is a natural evolution. It is the mark of time and the progressive change of a past in History. Facts no longer belong to everyone's memories, but to knowledge and erudition. Researchers and historians have focused and will continue to focus on making these exceptional moments known through new publications. But they will need archives. It is now these documents, whatever they may be, that constitute our heritage to preserve.
The woods of Kergoff and the stele of the Maquis of Tréouergat, with all its touching inscriptions, are now part of it.

-1- The "Osttruppen", or troops from the East, were substitute soldiers who had fought the Germans on the Russian front. Taken prisoner, they had only obtained their lives saved if they served Germany on another front. Stationed in Saint-Pabu, Captain Vladimir Razoumovitch's 164 men joined the Resistance in Treouergat thanks to the negotiations undertaken by Nathalie Douillard, née Ouvarov (1911-2000), a Russian aristocrat who had taken refuge in Argenton since the Soviet Revolution.
After the Liberation, and in accordance with the Yalta agreements, the Russians of the Osttruppen were regrouped in Rennes and then delivered to Stalin by the Americans. It is not known what happened to them, and whether a sorting was made between those who had served the enemy to the end and those who had joined the Resistance. But it is likely that, all having betrayed their homeland, they were either executed or deported to the gulags.

Thanks to Jos Saliou, President of the "Musée du Ponant" of St-Renan for his loan of documents. 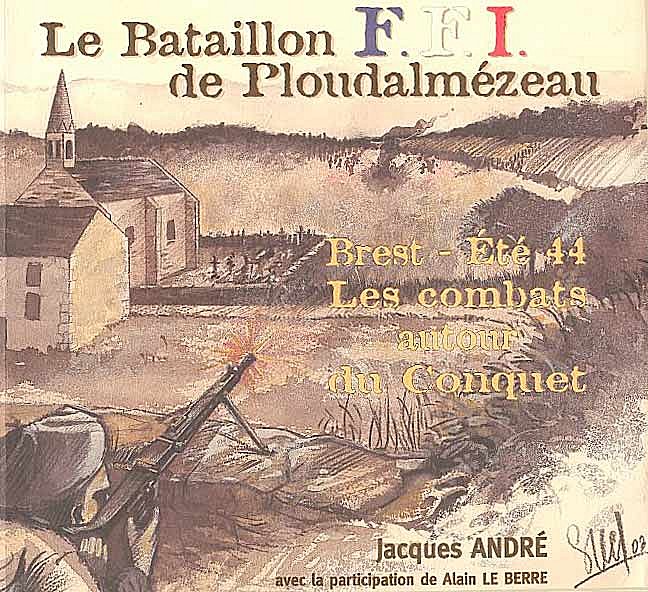 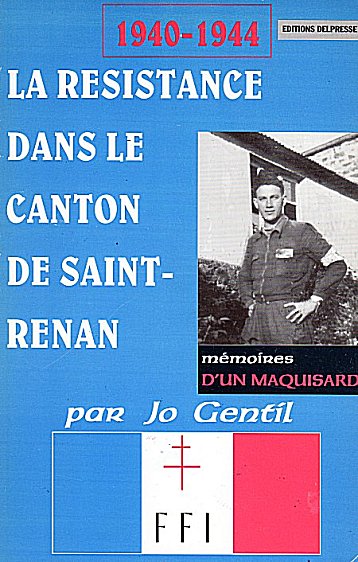 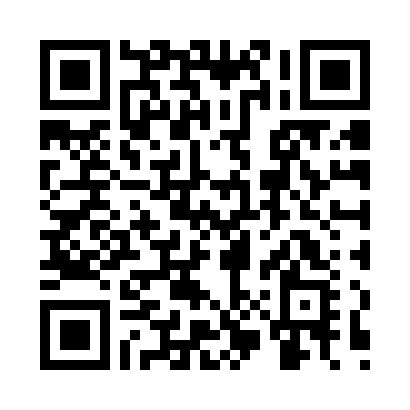