Animations are regularly planned in this manor: concerts and songs.
See on this site the section " Animations and festivals " 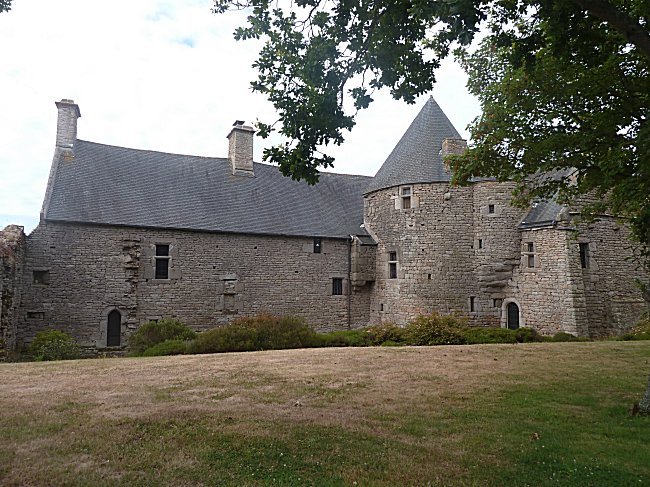 Access : Coming from St-Renan by the D68 road in the direction of Argenton, after the chapel St-Roch which can be seen on the right side of the road and passed a few houses, take the small road on the left at the corner of "La Pampa". Then follow the signs of the #4 MTB circuit, then on the left a narrow road signposted Kerenneur and signalled without exit. The manor is 600 m away.
Park on the side of the road, walk through the park, enter the courtyard and present yourself at the second door of the dwelling. During the animations, the entrance is not through the park but at the very end of the road, at the machicolated gate. 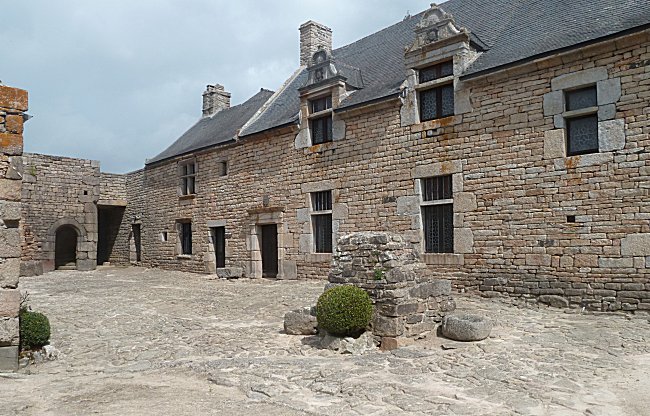 Far from the main traffic routes, the Kerenneur manor is hardly known except to regular summer concertgoers. It is an interesting fortified construction, dating back to the Hundred Years War, that the current owners have saved from ruins through a long period of renovation.
It is part of a complex built near a river, which included, in addition to the manor itself with its park, garden and outbuildings, the buildings of a tenant farm, a chapel, a dovecote, a windmill and two water mills.
Built around 1400 by Hamon de Kergadiou, what became a manor was originally a simple fortified watch post. Located at 1 km of a coastline much less inhabited than today, it made it possible to supervise the sea and to alert the close manors in the event of enemy landings.
Inside the dwelling, a very eroded coat of arms overlooks the door leading to the staircase. Obviously, this stone made a long stay outside, probably on the facade of the dwelling. We can distinguish the arms of Guyon de Kergadiou and Anne de Kerlozrec who married at the end of the XVth century. The construction of the dwelling could therefore date back to this period.
But it is another coat of arms that can currently be seen on the south façade of the dwelling: it combines the arms of Kergadiou with those of Kerlec'h on the occasion of the marriage of Tanguy de Kergadiou with Catherine de Kerlec'h du Chastel around 1510.

The left half symbolizes the Kergadiou family, the right half the Kerlec'h family.
The blue 'lambel' at the top of the coat of arms indicates that the bride and groom are both cadets and are therefore not allowed to carry full arms.

Above the windows of the first floor, which date from a remodelling around 1540-1550, two other coats of arms mark the marriage of Marie de Kergadiou, heiress of the manor, with François de Kersauzon, Lord of Penhoat.
The estate later passed to the Poulpry familly who kept it until the Revolution. It was then used as a farm. The family of the current owners acquired it in 1889. 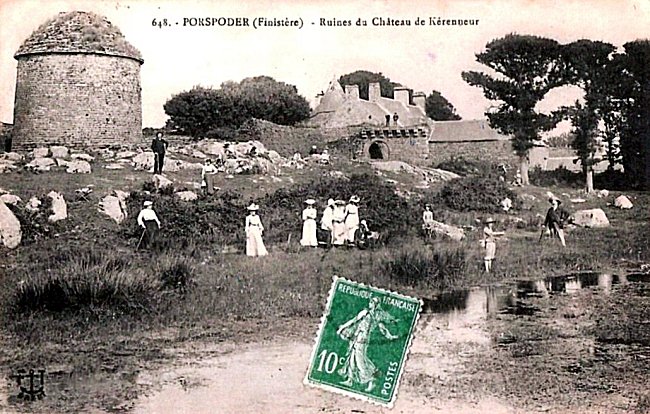 On this postcard, which includes about twenty people dressed in the Belle Epoque, sits the imposing dovecote destroyed in 1919. At the back you can see the entrance gate of the manor surmounted by its machicolated terrace. The roofs of the dwelling, the outbuildings and the large tower also seem in good condition. The view dates from before the 1914-1918 war, although the postcard was mailed in the 1920s.

It is necessary to cross a barrier to discover the entrance gate of the manor at the end of the access road. The machicolations which overcome the gate undoubtedly made it possible to defend it, but these also had for role to affirm the rank of the occupants. Machicolations border a terrace which is accessed from the courtyard by a narrow spiral staircase. 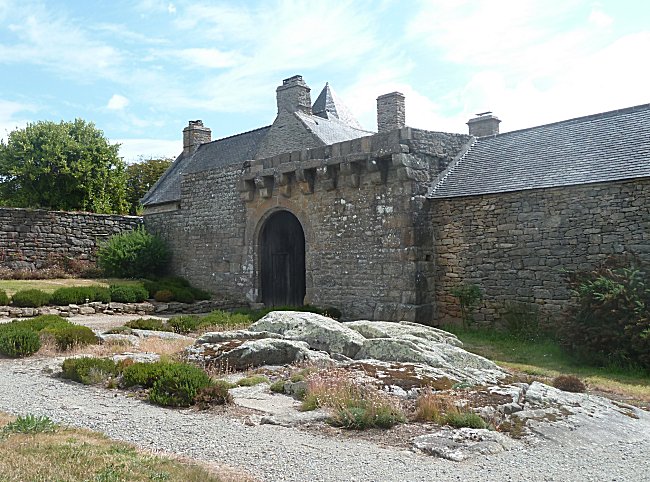 The beautiful courtyard of the manor is called "with a paved pavement" because its soil, which has a very rough flatness, is formed of large slabs placed on their edge to improve the drainage of rainwater. Everywhere dominates the pink granite of the Aber Ildut, as well in the stones of the constructions as in the paving. A rustic well, still in good condition, draws the eye towards the middle of the courtyard. At the back of the old enclosed garden formaly stood the chapel. There's nothing left today. 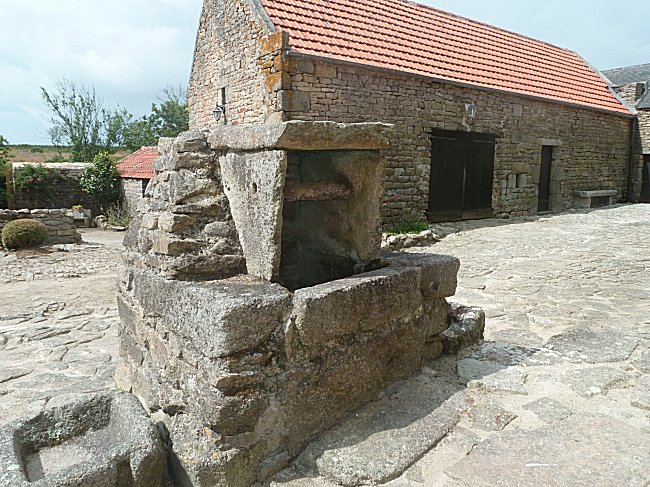 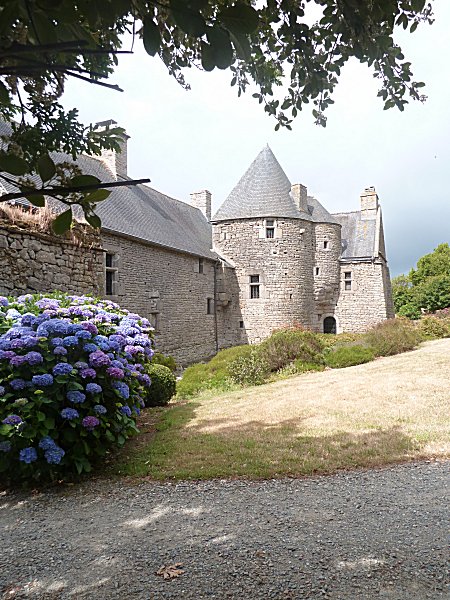 The northern façade of the dwelling has a more severe appearance because of its defensive function. Its large corner tower supports a watchtower which also rests on the west wing of the building. Both contain superb spiral staircases. Small ditches, once fed by spring water, were then partially filled and the current owners had to dig them again to clear the kitchen windows that were buried on the first floor. All the latrines of the manor flowed northward into these ditches.

The large hall inside now welcomes musicians in front of its vast fireplace during summer concerts. That hall measures 10m long and can accommodate more than 50 people. 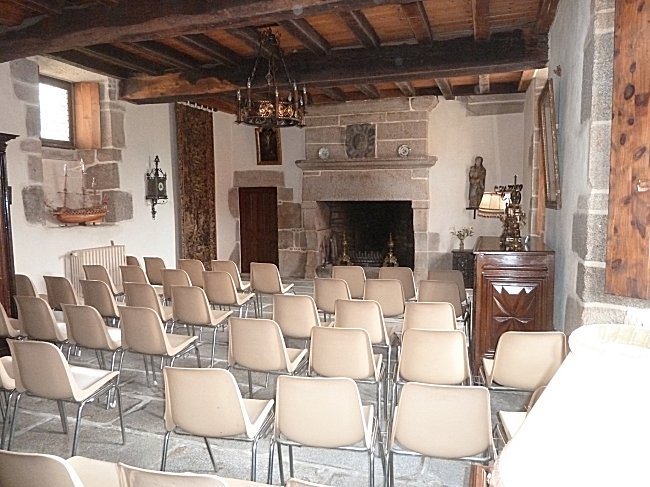 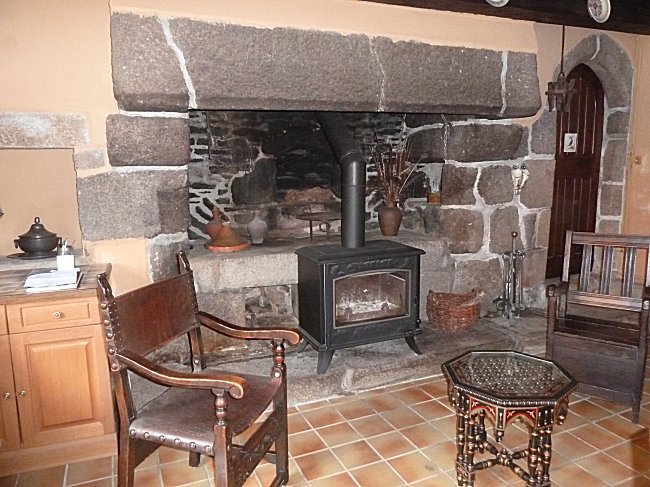 The dining room, or back kitchen, has imposing dimensions and still has a large fireplace. It has the distinction of having a stone basin embedded in a wall. It was the salting place (named 'charnier'). The meat was stored there under a layer of salt. There is also a bread or cake oven, a salt niche and stone shelves for kitchen utensils. 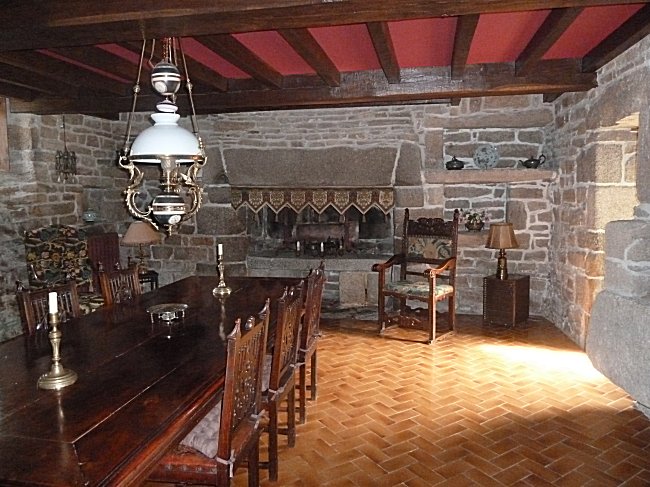 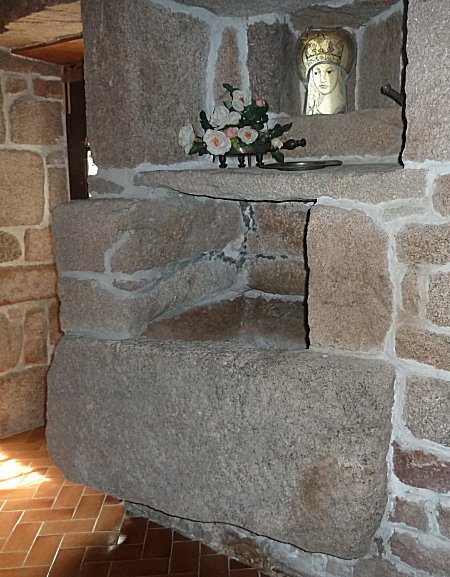 In the tower, a wide spiral staircase leads to the first floor. Its steps were assembled with great precision. These are 1.85 m wide. This staircase dates from the 16th century. 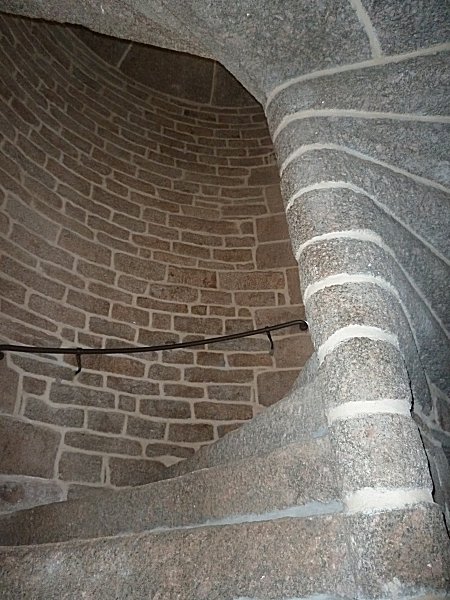 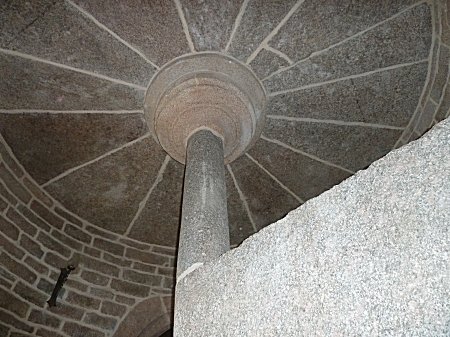 It ends on a landing with a magnificent ceiling in radiant slabs. From the landing, we reach the upper room on the left, nicely furnished style and equipped with a superb four-poster bed. This reception room with a barrel vault was built for the wedding of Marie de Kergadiou and François de Kersauzon. 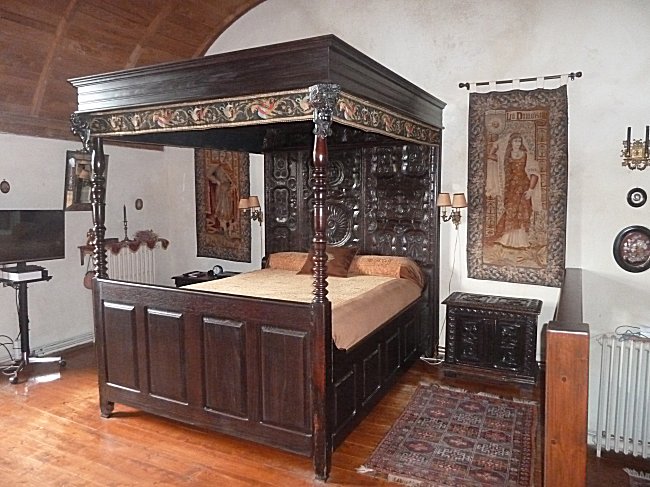 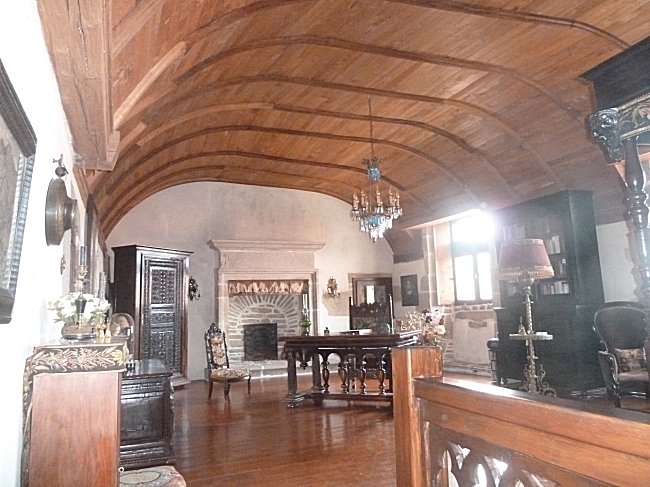 On the right of the landing, you can also climb up the small spiral staircase of the watchtower to the second floor where the upper bedroom opens. That one is octagonal in shape. It may have once been an office, an archive room or the chaplain's room.
The other more intimately inhabited rooms are, of course, not open to the public.

The visitor who completes his exploration of the places realizes that a small Breton manor has nothing to do with a palace of the Loire Valley, neither in architecture, nor in dimensions. It is not a building intended to sufficiently display the power and wealth of the masters of the place. First of all, it is a building intended for everyday life, at a time when poeple were also looking for the best possible security conditions. No superfluous ornament, but sobriety in no way excludes also having taste.

-1- 'Kerenneur' seems to be the current spelling. But we also meet 'Kerenneur', 'Keréneur', 'Kerèneur' and 'Kereneur'. See the titles of the sources below for example.

Documentation kindly provided by Mr and Mrs Egret, owners of the Kerenneur manor.

Animations are planned every year in the manor: concerts and songs. See on this site the section " Animations and festivals ". 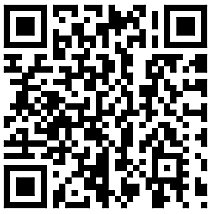