Listed in the inventory of Historic Monuments in 1987 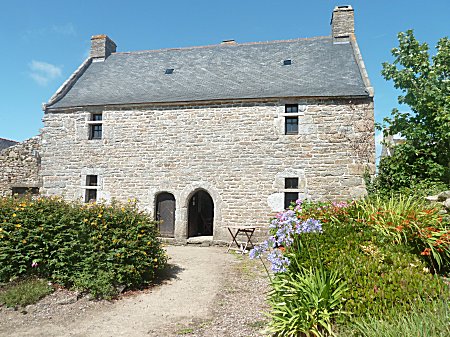 Access : Leave St-Renan by the Ploudalmézeau road (D68) and continue straight on towards Argenton. 1.3 km after the St-Roch chapel, turn right towards Landunvez. Cross the village, join the D27 and continue in the same direction to the first houses of Kersaint. Then take on the left a small road marked "Maison des chanoines" then the first on the right. Park in the yard.

This house was built between 1550 and 1560 for a small community of six canons created in 1518 by the lord of Trémazan Tanguy(V) du Chastel and intended to manage the chapel of Kersaint which was the object of numerous pilgrimages. It must be said that before this construction the "white fathers" stayed with private individuals, a situation that made it difficult to practice their second function as herbalists-apothecaries. 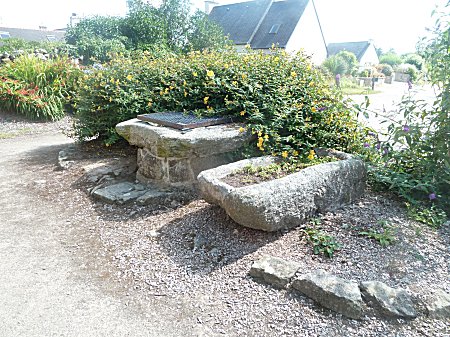 What today constitutes the small car park where visitors park was to be in the XVIth century a garden of medicinal plants whose well is always visible in front of the house. This façade is in fact the back of the farmhouse. When one goes around the shed which disfigures it, one discovers that another building, slightly taller, is attached perpendicularly to the main construction, almost in its middle. 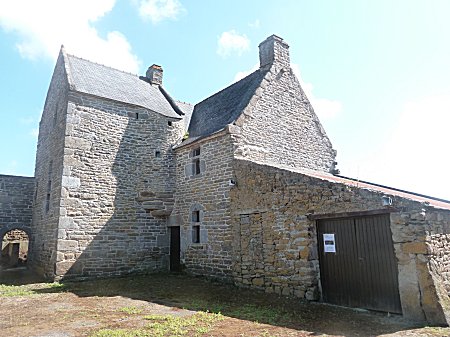 At the junction of the two buildings, a very simple, corbelled watchtower encloses a narrow staircase leading to the attic. Its only lighting is provided by tiny openings. 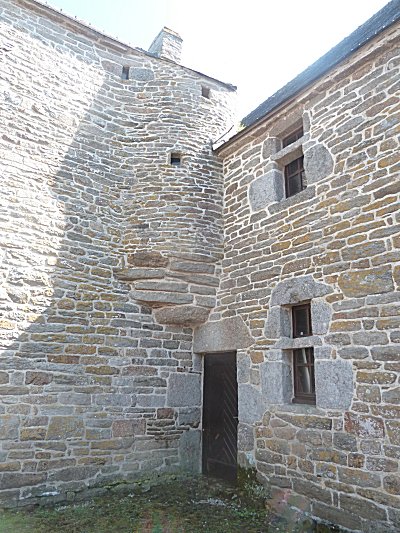 The main entrance was originally located on the north side.
This stern building, in local stones, has no ornamentation except the small vertical bays barred by a single horizontal mullion and three rounded-topped doors fitting into a chamfered stone arch. 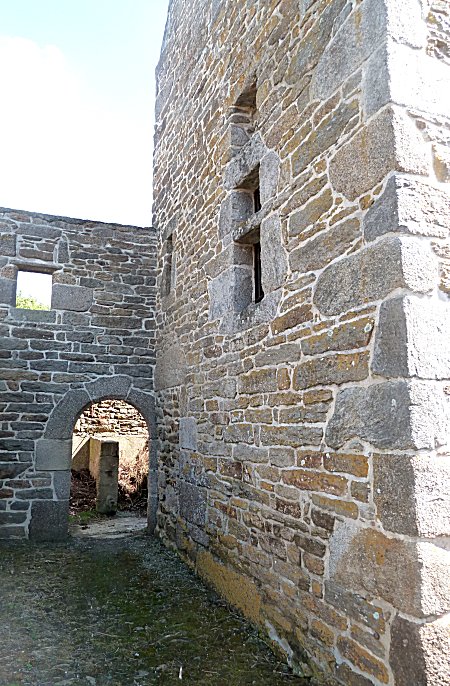 The semicircular arch shown above surmounted one of the three doors that gave access to another now ruined one-storey building. This building, isolated from the whole, was to be used to accommodate passing guests, sick or pilgrims.

On the south façade of the building, one will notice that the twin doors are not identical: one on the left is surmounted by a basket-handle bow, the other with a higher warhead. This difference, predicted from construction, may correspond to a hierarchy of entrances. 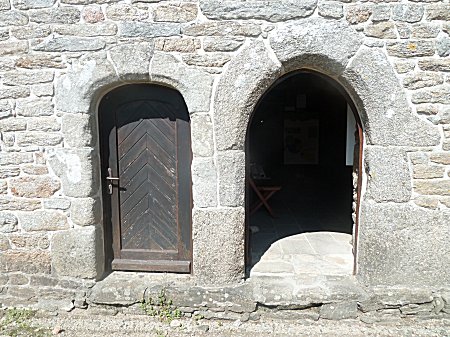 A sober and bare interior: 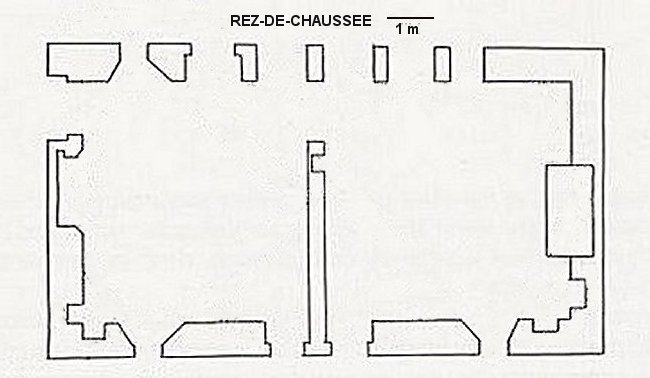 As soon as you cross the threshold, you think you've crossed the centuries. The ground floor consists of two rooms of similar dimensions, both with a large fireplace and a raised hearth.

The floor, newly paved with micaschist of Le Conquet, was formerly clay. Small alvoves are provided in the thick walls. One guesses that these shelves were used to receive candles and apothecary pots. The windows have side embrasures that allow daylight to enter the rooms better.

No space is lost. Under the staircase, a storage room with a series of niches in the walls can store decoctions, dried plants and apothecary products. 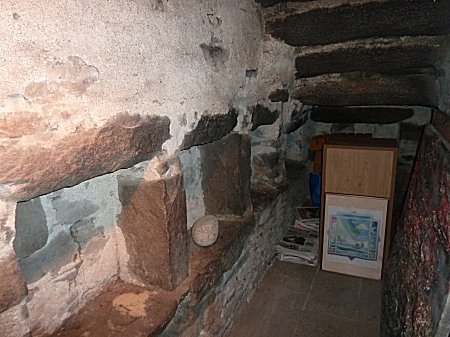 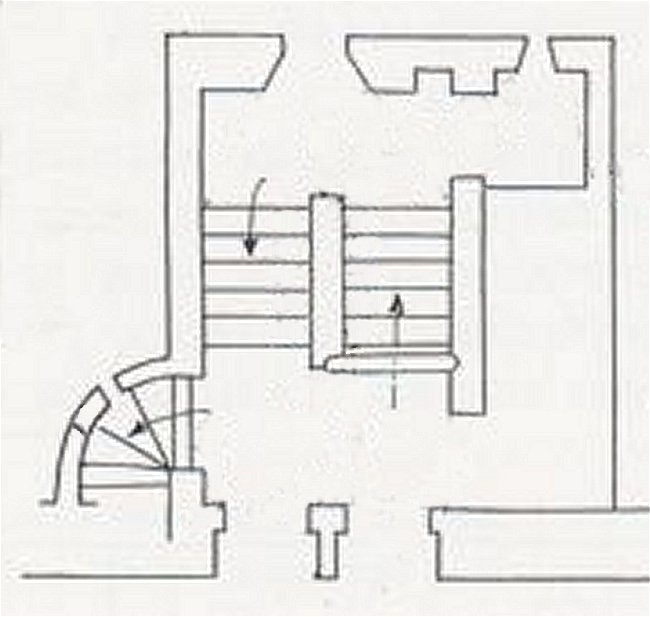 The stone ramp is chamfered.
One arrives at a landing which opens on the two large rooms of the floor as well as on the small staircase of the watchtower going up towards the attic.

Each of the two rooms was to serve both as a bedroom and a workshop for one or more white fathers. As on the ground floor, small niches in the walls served as shelves. The right feet of the fireplaces are carved and the hearth walls are reinforced by a discharge arch formed by stones placed on edge. 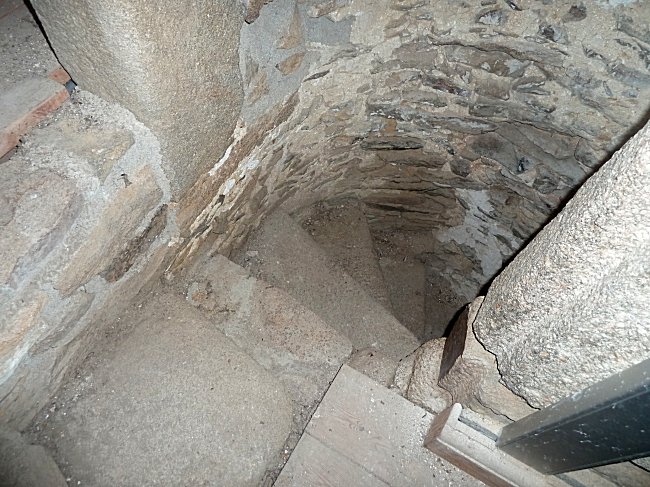 The narrow staircase leads to the left to a small room that was the room of the dean of the monks, while on the right you reach the large attic room, the framework of which is admired and which was also used as a room. For safety reasons, no doubt, this large attic has no chimney. Without heating and insulation under the roof, one guesses that the occupants would have to fear spending the winter there. 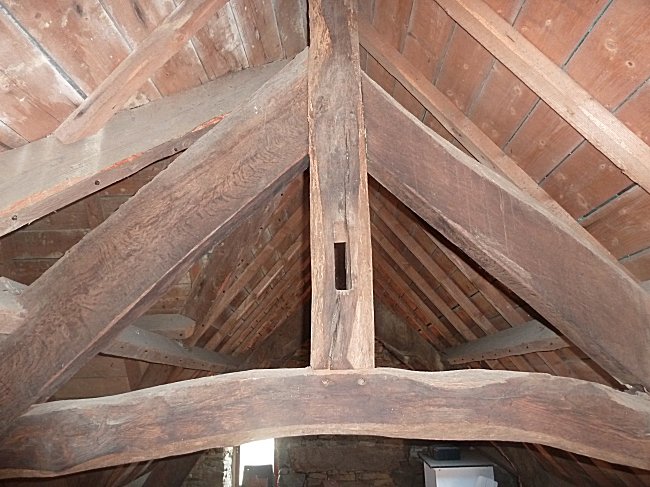 So the canons lived there in community. However, thanks to the income from their office and also to donations and legacies, they have, over the years, owned several houses in Kersaint in which they preferred to settle. A 1786 lease clearly says it:" Guillaume Gabriel Falchun, Guillaume Bothuan, Jean-Louis Leveillant and Yves Mailloux, priests-sieurs of the collegiate church of Kersent-Trémazan, all living separately au bourg dudit Kersent, paroisse de Landunvez ...".
Four years later, during the Revolution, the brand new municipality of Landunvez identified the real estate of the collegiate church of Kersaint with a view to nationalizing it. The list is long because these are distributed not only in close parishes like Landunvez, Plourin, Plouguin, Plouarzel, Ploudalmézeau and Lanildut, but also in Ouessant, Crozon, Plougastel-Daoulas, Guiquelleau, Landéda, Lannilis and Plouzané. In addition to multiple farm lands, this tiny community at the end of the world, whose members seemed to live in perfect poverty, owned no less than thirty-three houses!

Thanks to the association "SOS Château de Trémazan" whose head office is at the Maison des Chanoines, and to its president Jean-François Le Ménec for his help and for the documents he kindly provided.

On average 5 times a year, exhibitions are organized at the Maison des Chanoines: painters and photographers follow one another.
See our page Animations and festivals . 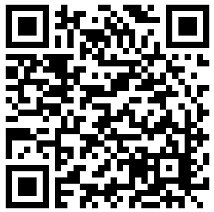