The drudgery boundary stone of Trébabu 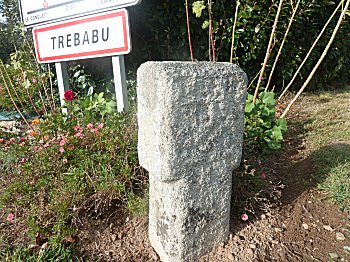 Access: This boundary stone is located along the departmental road D67 which connects St-Renan to Conquet, exactly at the junction of the road of Trébabu. A small car park allows parking in the immediate vicinity.

A milestone along a road, will you say, what's more normal? Hundreds of motorists pass by it every day without even noticing.
83 cm high and 31-40 cm wide and 23 cm thick, this granite stone is reminiscent of the shape of the old signposts. Nothing original, therefore, at first sight. 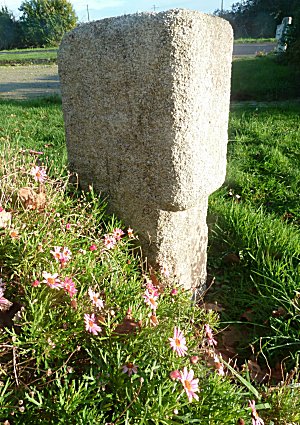 Let's approach a little bit to examine it. Depending on the time of day and the lighting that reaches it, it is often difficult to see that it has engraved inscriptions. 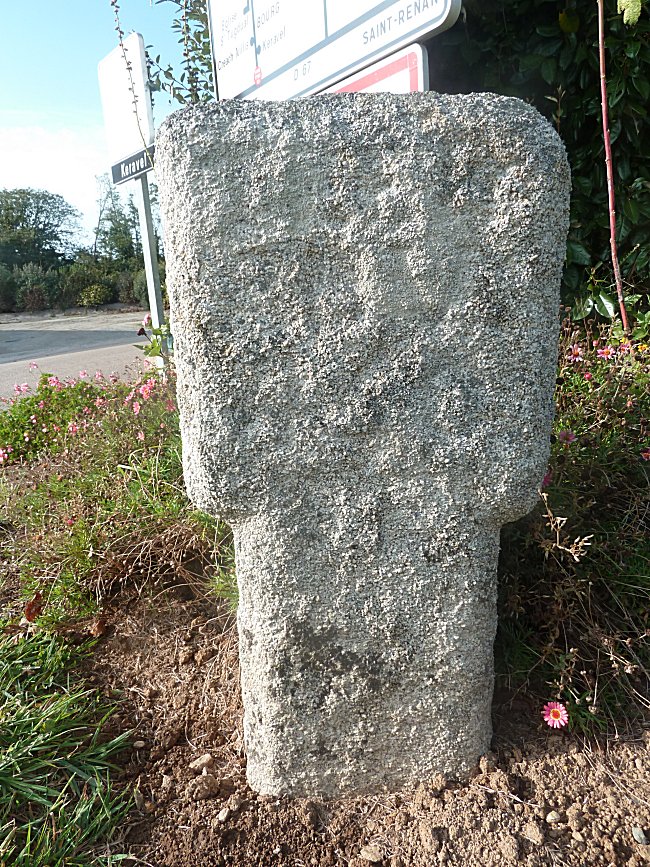 Now, look at the photographed side above. It reads:

It indicates : TREBABU 420. But we are already in the town of Trébabu whose town hall and church are close, about 150 m.

The other side, towards the hedge, bears the mention:

The coastal town of Plougonvelin is located about ten kilometers to the south. As for the number 3310, you think, of course, that it is a distance, in a rather enigmatic unit ...


In his book 'Pays d'Iroise, sites et découvertes', Jean Lescop tells us that this marker is not in its original location. It was located along the same road, but 4.5 km further east to St-Renan, near Kerzevéon.

This stone, which probably dates from the 17th century, is in fact a testimony of the Old Regime. The maintenance of the roads was carried out at that time by the inhabitants during the days of drudgery. The marker indicated, according to the face which it presented, the length of road whose works were attributed on both sides to each parish.
And the unit of length was then the toise, that is to say 1,949 m.
Thus, the inhabitants of Plougonvelin had to maintain:
3310 x 1,949 m, or 6.451 km of this road.
Those of Trebabu 420 x 1,949 m is 818 m.

And as nothing indicates how the stone was oriented, opinions diverge on the choice of the portion of road allocated to each of these parishes.
It is a pity that during his trip, we did not think to respect his original orientation.

Drudgery boundary markers are not very common. There is yet another on the road from St-Renan to Gouesnou, near Brest. It concerns two close parishes since it indicates on one side "Plouguin 2200 toises" and on the other "Lanrivoaré 380 toises". It seems that it has been moved too.