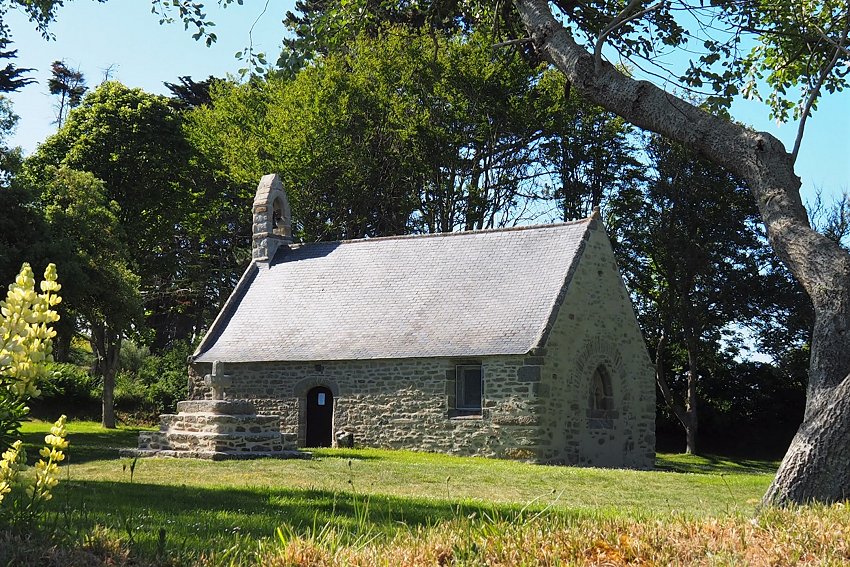 Access : Leave St-Renan on the D68 road towards Argenton and continue straight. Turn right in front of the harbor towards Landunvez. After 800 m, turn left onto a small road signposted towards the St-Gonvel chapel. Then keep to the right and turn left onto the small road called Hent Sant Gonvel. The chapel appears on the right in the centre of a large grassy enclosure. Park near the entrance of the pen. 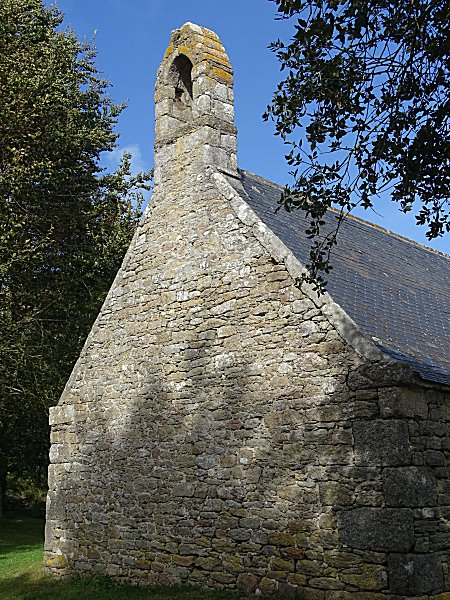 This small chapel a little far from the main road doesn't attract many visitors. It must also be admitted that it is rarely open to the public. This lack of interest is probably due to the fact that it deserves major restoration work.
It is named after Saint Gonvel, a Breton saint who, like many others, is not recognized by the Church. There is no record of its existence. However, we can think that it is the same character as the one who is still venerated under the name of Saint Gonval or Conval in Hanvec, south of Brest. A chapel, now disappeared, was built in the forest of Cranou. This hermit from the Early Middle Ages also lived in the Bois du Gars in L'Hôpital-Camfrout. In the Iroise's country, you can see his name in the one of the town of Plougonvelin. If it is the same saint, we could explain his veneration to Landunvez by imagining that, coming from across the Channel like many other monks, he would have landed on the neighbouring coast. And he would have chosen the dolmen that now bears his name as a place of hermitage.

With a rectangular plan, the Saint Gonvel chapel has a blind bell tower wall. At the top, the old bell tower is empty1. At the other end of the building, there is a trace of a large Gothic archway with a walled interior. 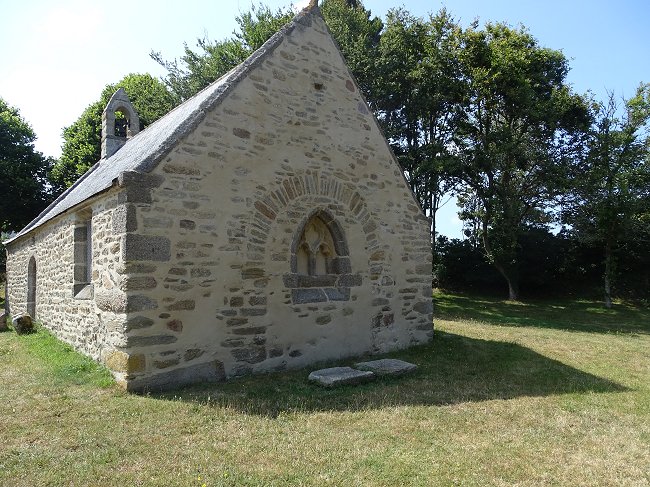 This filling is not recent since it shelters the medieval remains of another, smaller opening, with trilobal arches also walled in. The large arch is not an old window as it extends to the ground. 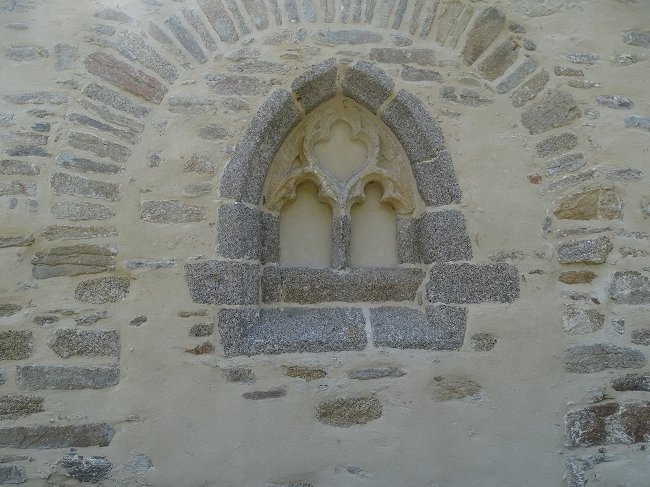 It was therefore originally either the main opening of the building or a diaphragm arch inside the building that allowed access to a part of the chapel that would have disappeared.
The first hypothesis would place the altar to the west, along the bell tower wall. It is therefore unlikely, as the altar is always placed in the east except in cases of force majeure.
This suggests that the building has been truncated. And the architecture of the small window would take these works back to around the 16th century. The installation of the altarpiece is probably the reason why this opening was also walled up. 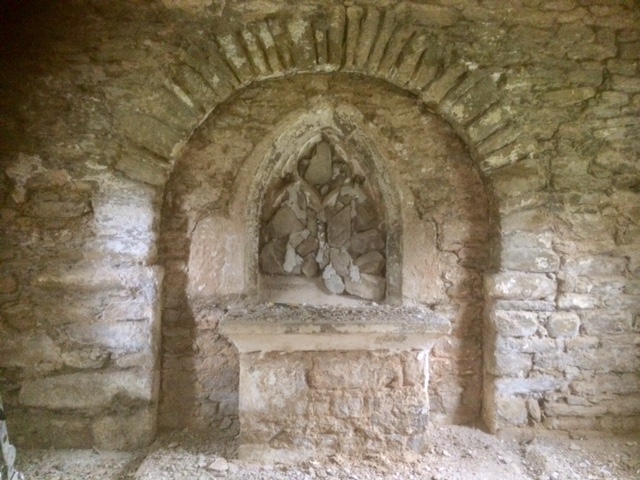 When, inside the building, the altarpiece was removed for restoration,
the old diaphragm arch became clearly visible
© Photo A. du Chéné

The entrance to the building is located on the south façade between two pieces of Gallic stelae that may have supported crosses. In the same commune, further north, near the chapel of Saint-Samson, a Christianized stele bears an engraved inscription: TP ST GONVEL 1757. These small Iron Age monuments have often been moved.

Above the door, in a niche, an enigmatic head awaits the visitor. 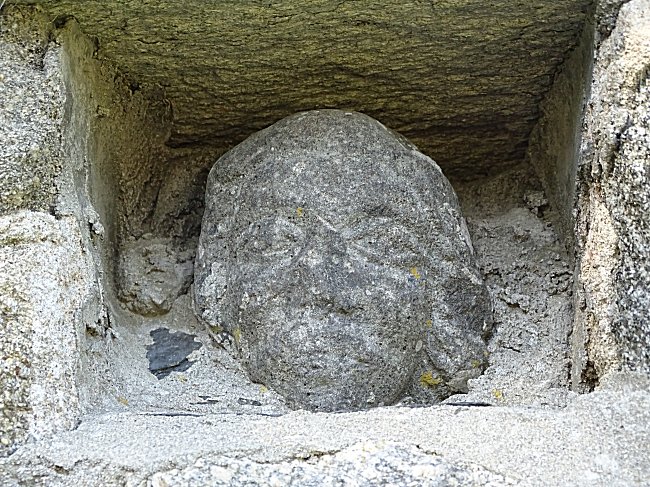 Its state of erosion indicates that it has long been exposed to the elements. It could therefore have come from a mutilated statue whose location is unknown. 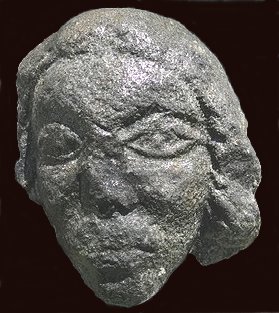 The same sculpture after cleaning
© Photo A. du Chéné

While most of the building is empty, an altar and an extraordinary altarpiece from the beginning of the XIXth century constitute the only furniture. 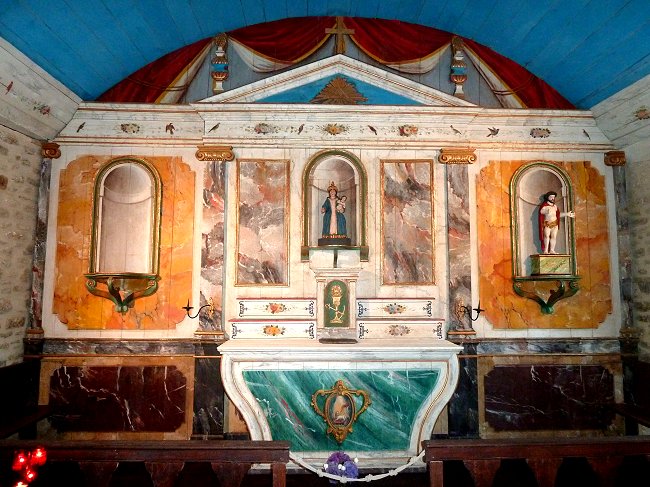 Hiding the entire back wall, the present altarpiece is a remarkable work, a gigantic trompe l'oeil painting on colourful woodwork that creates a pleasant and playful atmosphere. At the very top, at the level of a barrel vault panelled and coloured in bright blue, there is a theatre curtain raised in the Italian style around a central cross. Supported by two coloured pilasters, it opens onto a wide pediment in a classic style. 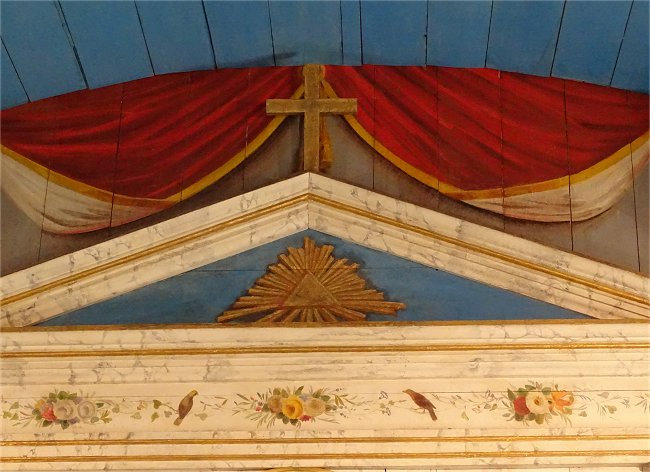 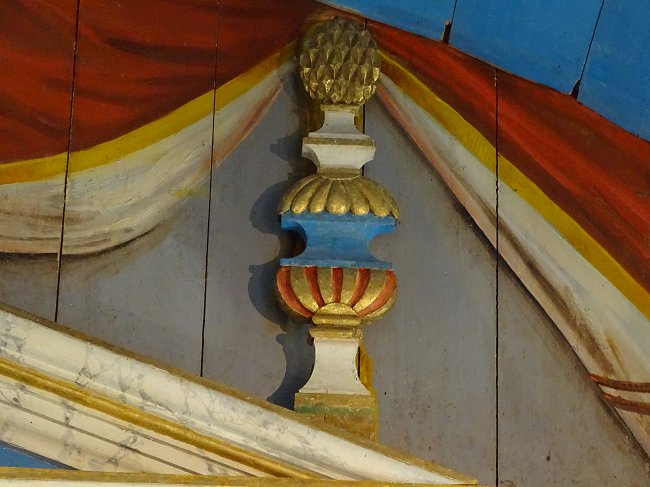 The pediment surmounts a bucolic frieze composed of floral garlands and birds.

False marble, trompe-l'oeil niches, we are immersed in a completely fashionable reconstruction at the beginning of Romanticism.

In front of the painted niches, three statuettes rested on a support that can still be seen. 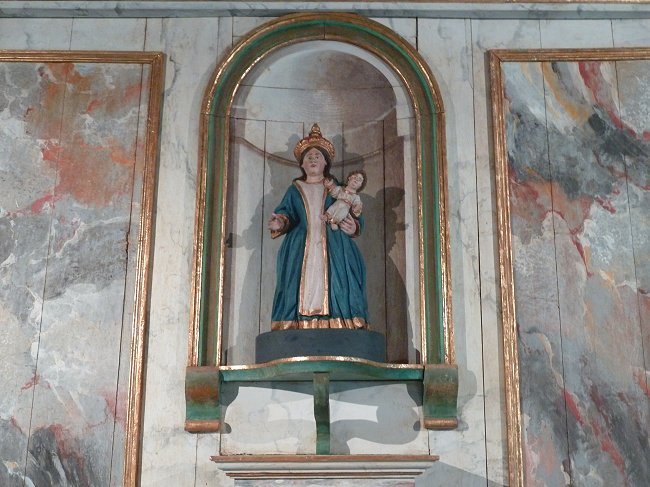 We know that they represented Saint Gonvel as a monk, a Virgin and Child, and a Christ showing his wounds to Saint Thomas. These statuettes were transferred to the village church and the Kersaint chapel. 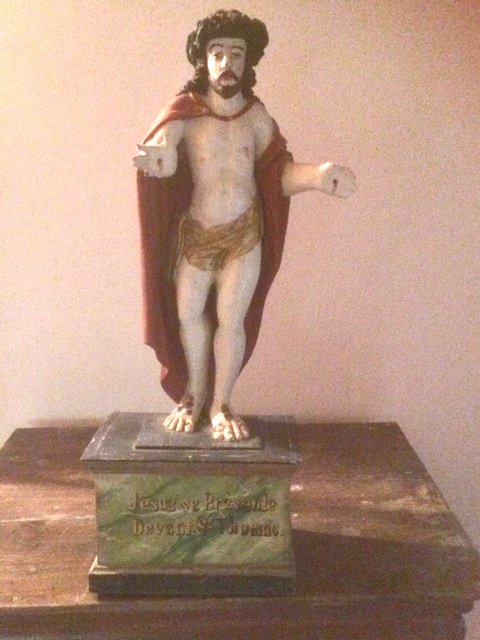 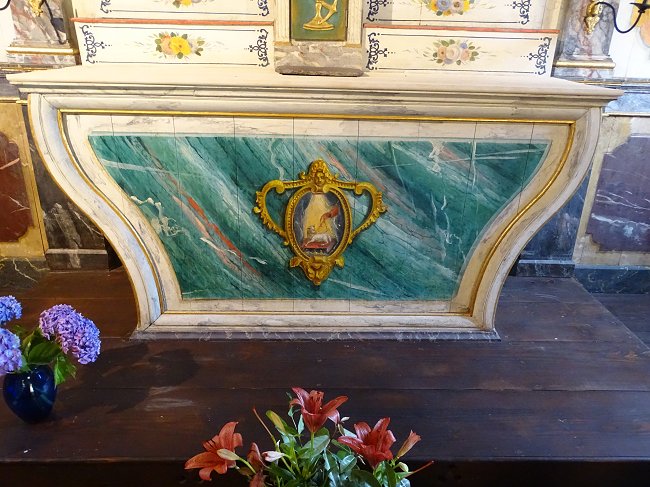 The Kersaint chapel has an identical high altar and the same floral decorations.

And on the ceiling we discover the angelic faces of an entire family around two hearts in love. 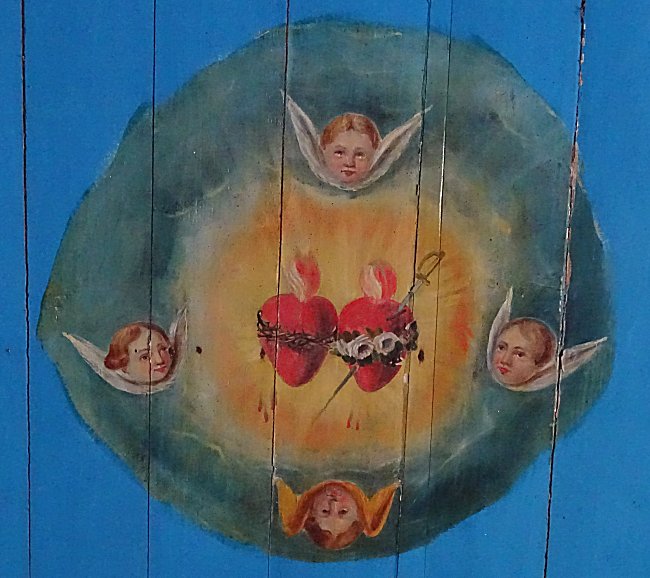 A heart pierced with a sword as an arrow:
it is probably a noble lady who endowed the chapel with this beautiful ornament
and who had two white roses painted on a bruised heart2.

The chapel thus bears the traces of an evolution that extends over several centuries. We will see that on the outside we go back even further in the past. 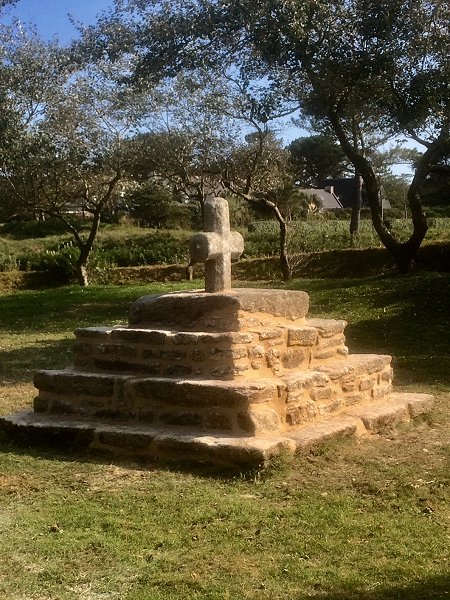 The monumental calvary, in steps, similar to that of Saint-Mathieu Headland, probably dates back to the Middle Ages. He sits in the middle of this space, which is none other than the old cemetery surrounding the chapel. This building truncated in the 16th century, was probably preceded by an even older building.
But that's not all : let's look at the southeast corner of the building. 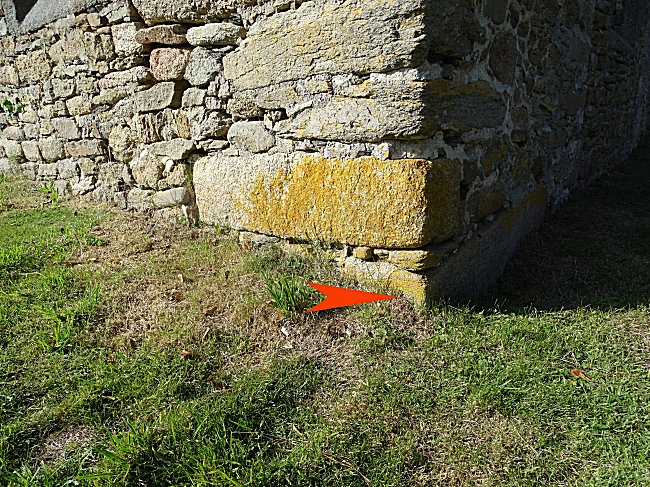 Two long stones are arranged at the base of this corner. The one below is a Gallic stele. If we take the trouble to observe it closely, we can even see engravings. 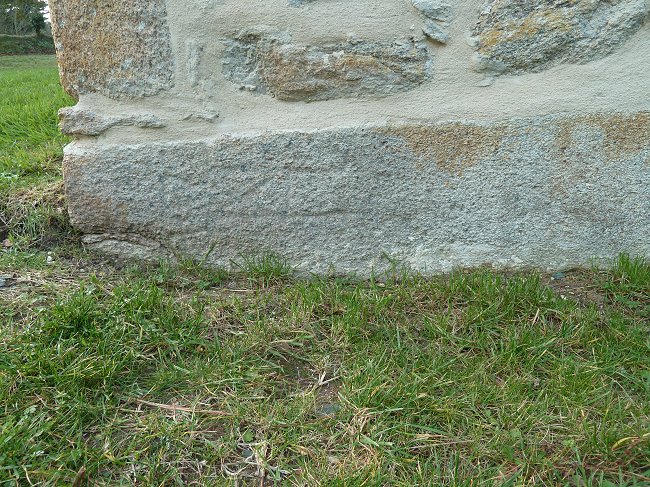 The reuse of a pagan stele as the cornerstone of a chapel is not at all by chance. It reflects the desire to Christianize an ancestral place of worship. More details on this stele can be found in the archaeological remains section of this website.

-1- The bell tower being in poor condition, the bell was removed for safety reasons. It will return into the bell tower after the work.

Thank you to this Internet user and to Mr Amaury du Chéné, President of the association Pour la sauvegarde des chapelles de Landunvez, for his help and his loans of documents. 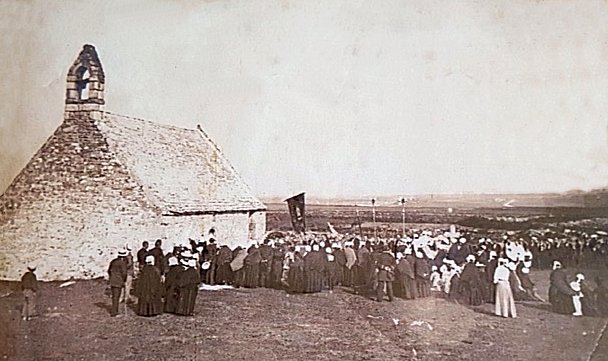 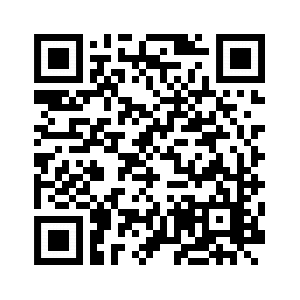