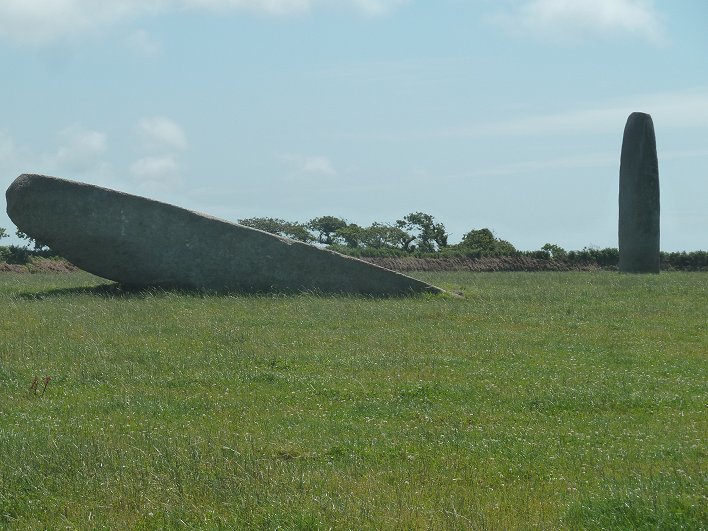 Access : From St-Renan, take the exit Ploudalmézeau - Argenton ( D 68). Continue straight on towards Argenton and at a roundabout, turn left towards Brélès then turn 1.2 km further on at the first small road on the right. At the end of this road, take a wide dirt road to the right ( sign). The menhirs can be seen in a large field on the left.
From Argenton, take the D 68 towards St-Renan and turn right at the first road after the St-Roch chapel. Pass the hamlet of Kergadiou and take a wide dirt track to the left. You can see the menhirs on the right. One can then walk along the path serving the plots. 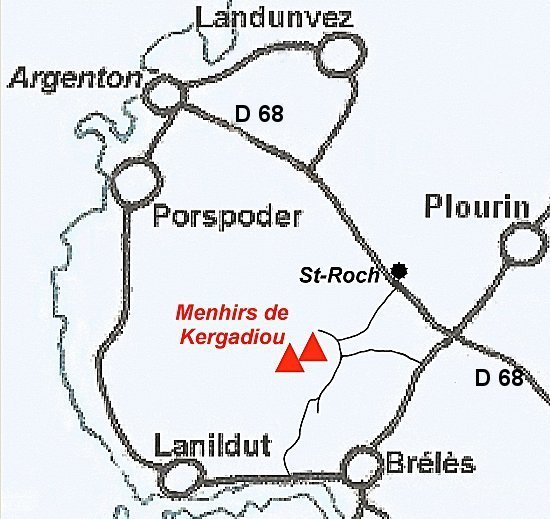 Be careful, do not enter the plot if there are cattle or if it is cultivated.

More unusual monuments, you might say. And indeed, these two great menhirs are part of the giants of the Pays d'Iroise. But what is striking is that the strongest is on the ground, as if he had been defeated by the other during a colossal fight.

To observe them closely, one would have to venture into the plot, which is strongly discouraged because it is private and most often cultivated. Stay in the path which borders the field, because with a good zoom, it is possible to photograph the stones in good conditions.

In reality, it is not known why the largest menhir is not placed in a vertical position. Would it have been abandoned during erection? Or would he have been slaughtered without being abducted? But then why would the other one be kept in its original position? Mystery... 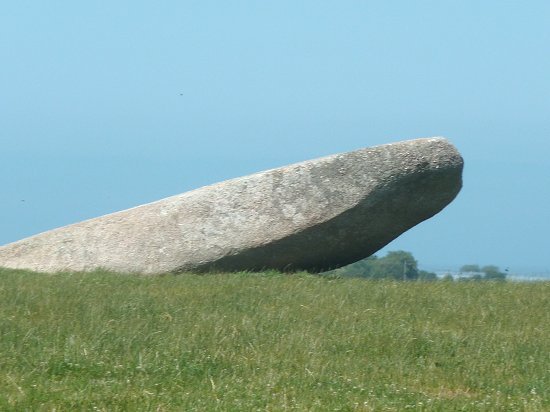 These two megaliths were cut from the same porphyroid granite with pink feldspar inclusions from the outcrops of Aber Ildut. One finds there the same choice of rock as in Kerloas or Kerhouézel, the same finish, the same dimensions, and undoubtedly one can think that all these monuments are contemporary. This granite, easy to bush-hammer, was suitable to cross time because it does not present any crack, no defect. Only its weight is impressive and these blocks have been evaluated weighing at least between 40 and 60 tons.
The lying menhir forms an angle of 18° with the ground. Its upper surface, well bush-hammered, is 10 m long. It has a relatively recent topographic reference materialized by a metal rod. Only the lower face remained rough as when it was detached from the original rock. Some archaeologists rely on this finding to think that the lying menhir was abandoned during bush-hammering and was never erected.
The still standing menhir is 8.55 m above ground. It is completely bush-hammered. Excavations carried out in the 19th century at the foot of this monument gave nothing. 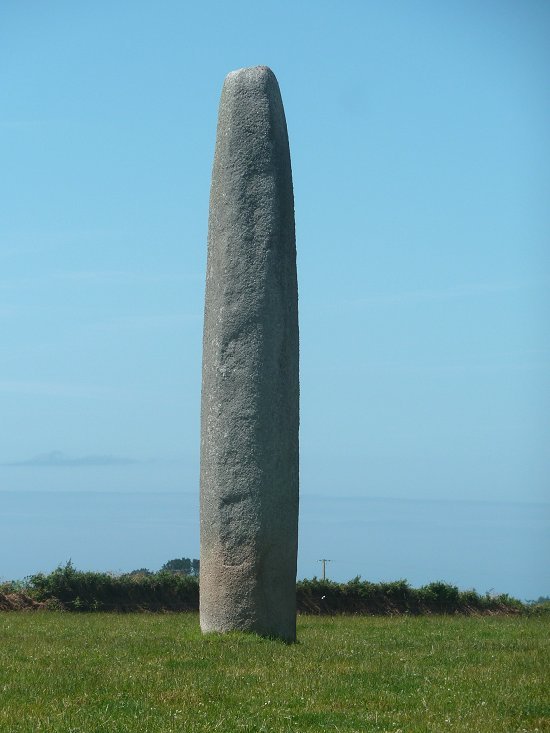 A legend collected by Mr.Taburet in 1925 and reported by Louis Le Guennec in Le Finistère monumental is attached to this remarkable megalithic complex :

"A lady 1 from Great Britain, emigrated to Armorica, had brought back in her silk apron the superb stone which is now erected on the heights of Kergadiou. She had stolen this stone from an old witch who, of course, was furious with this theft. You could hear it all over Armorica :
- Ah, your flight won't benefit you ! This rock, I'll break it, I'll spray it !
With rage, she tore off another huge block that was within her reach, and with a single effort, she threw it through space in the direction of Kergadiou. Missing her objective by a few tens of metres, her projectile would have been stuck in the ground as we can still see it today."