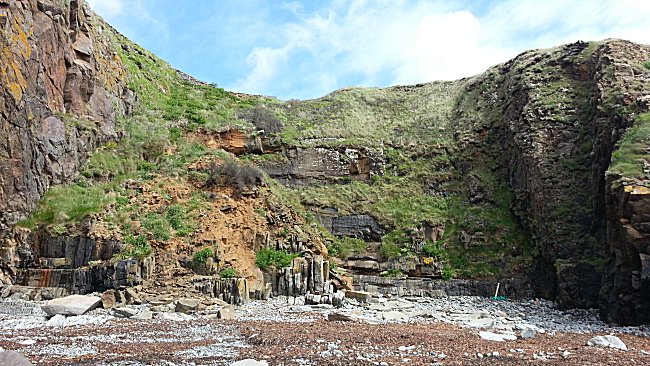 
This is an exceptional vein that can only be seen at a few rare points along the coast.


Access : From Ploumoguer, follow the D28 towards Le Conquet. After 300m, turn right towards Illien beach. At the end of the road, turn right again and then take the first small road to the left ( Calvary ). We arrive at the hamlet of Brenterc'h. Turn left and follow the asphalt road. Park under the trees at the end of the tarred area.
Continue on foot this wide path which becomes rocky, for about 400 m until it widens at the very bottom of the descent. Follow the grassy path on the left, which leads to the coastal path. To the right of the zigzag, you can go down to the shore at low tide.
Carefully progress rights to the north among the slippery rocks in order to observe the cliff of the next cove.


Do not approach too close to the cliff : frequent landslides. 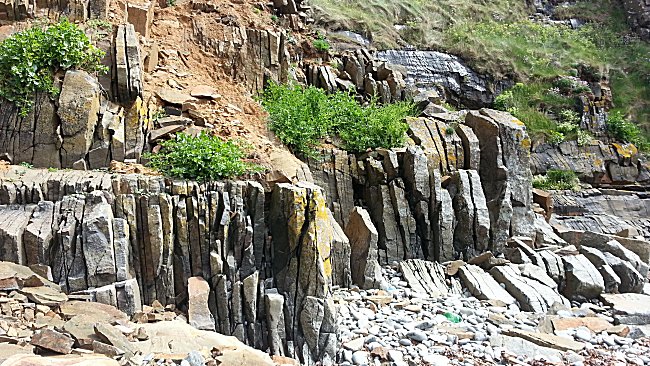 A recent rockfall of stones hides here a few meters of the cliff.

The rocks on this part of the shoreline are very different from the others: instead of the usual gneiss called Kerhornou's, and over a width of about thirty meters, vertical blackish grey slabs appear. 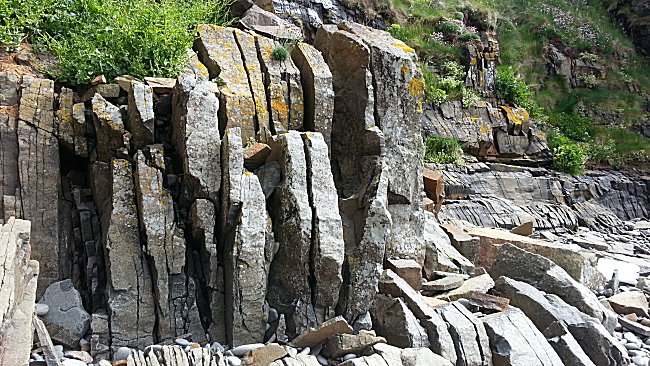 This hard, very dense rock is dolerite : magma from the depths of the Earth had been injected into the Earth's crust about 190 million years ago through faults. Geologists call this rock intrusion a dyke: a viscous magma at high temperature infiltrates a fault in the Earth's crust and gradually cools down in depth. On the foreshore, the outcrops are spectacular. 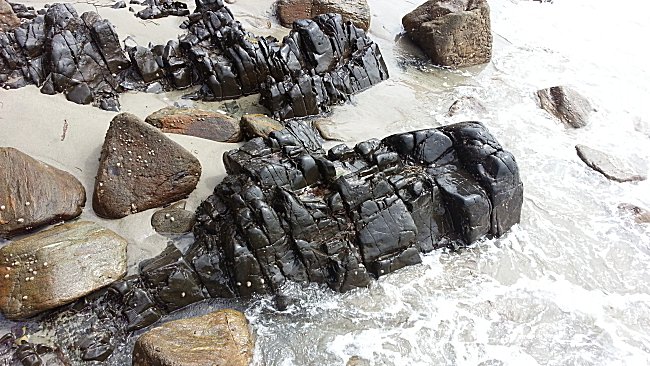 When we go back to the first cove of Brenterc'h, we can notice another outcrop, but six times less wide, on the south cliff.
The Brenterc'h dyke reappears elsewhere in the Pays d'Iroise, in the cliff and on the foreshore of Porzh Milin beach ( Porsmilin, municipality of Locmaria-Plouzané ). 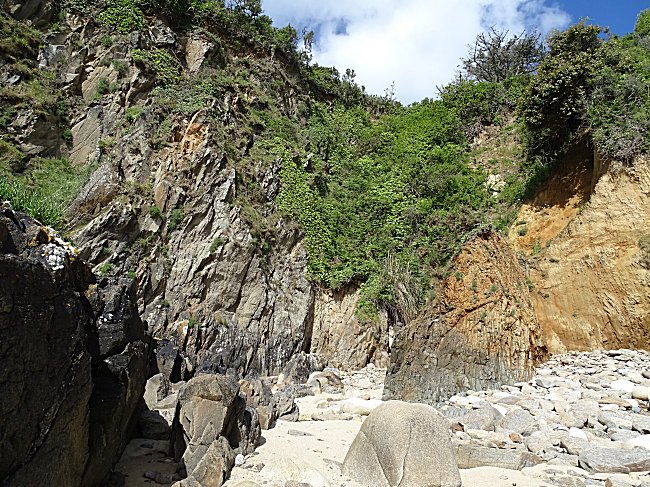 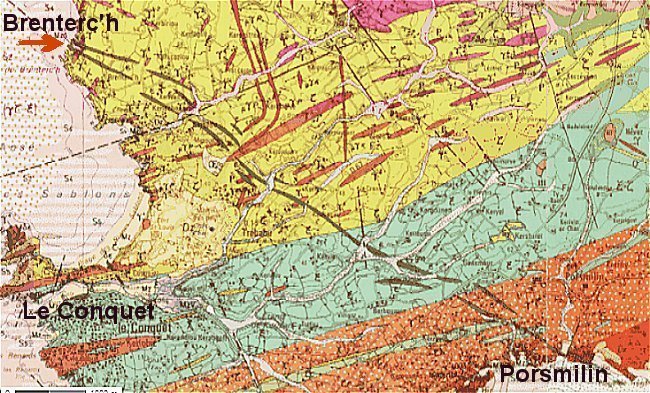 The small brown spindles mark a double line of dolerite, that crosses the Pays d'Iroise
from the Brenterc'h cliff in the Northwest,
to Porsmilin Beach in the southwest.
Fragment of the geological map at 1/50000th Le Conquet,
Louis CHAURIS et Bernard HALLEGOUËT,  Ed. BRGM, Orléans.1989.

The dyke then extends into the Crozon peninsula, near Camaret, and again further south, in Cornwall, between Douarnenez and Quimper. This set of outcrops follows the direction of the Bay of Biscay coast ( NW-SE orientation ).
This dyke is comparable to others that are visible in the Iberian Peninsula, Morocco and beyond the Atlantic Ocean, northeast of the Appalachians. However, the opening of the North Atlantic in the super continent Pangea, 170 million years ago, also followed the same direction.
The Brenterc'h - Porzh Milin - Douarnenez - Quimper dyke marks the first signs of the dislocation of the Pangea and the creation of the Atlantic Ocean. A world event that exceeds us, both in size ( 8000 km in length ), age ( the Triassic-Jurassic transition ), and duration, as it always continues to grow by an average of about 1 to 2 cm per year.
Brenterc'h and Porz Milin are therefore two major heritage sites in the Pays d'Iroise where you can touch the remarkable witnesses of a crucial episode in the great history of the Earth.

If you go up the coastal path to the north, you can access two interesting sites :
The first, in Porstheven, is the place where is a davied and from where you can see seaweed-gatherers houses.
The second, further on at about 500 m, is a small chapel located in a pretty valley.

Read also the very detailed page of the website of the Laboratoire de Géologie of Lyon : Planet Terre 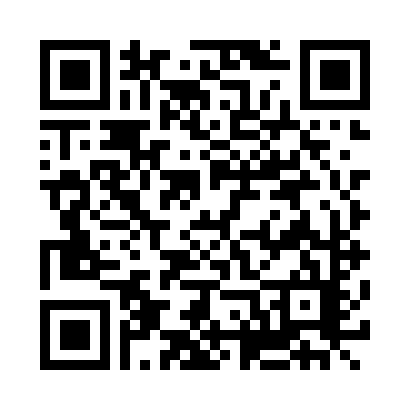