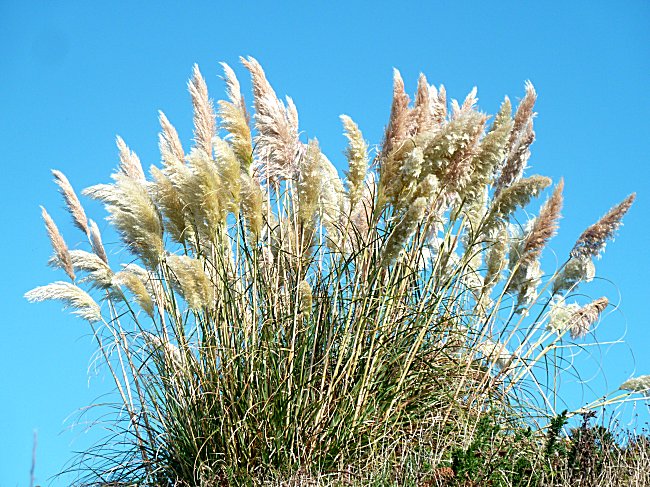 With its majestic habit and pretty white feathers that sway in the wind, resistant to drought, this plant native to South America is the ideal vegetation to decorate a massif in a garden. Some municipalities have even reserved a prominent place for it on a roundabout or along the pedestrian walkway. Look closely, you see it everywhere. It is indeed very decorative as below in hedges to hide the wall of a street. 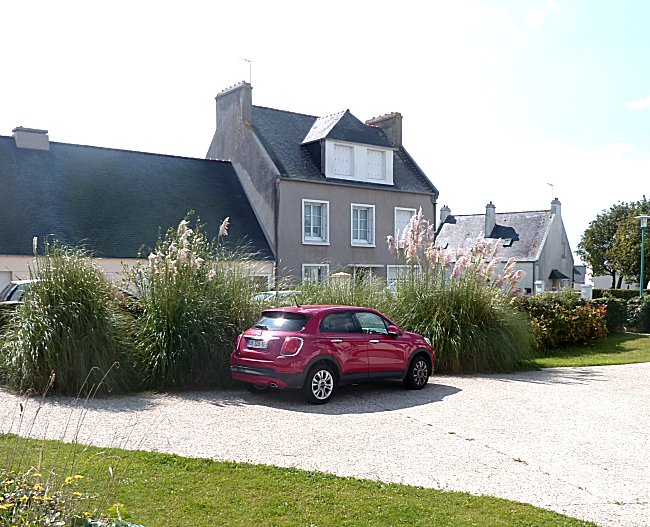 In addition, its very rapid growth is appreciated by amateur gardeners who are looking for a virtually immediate effect. 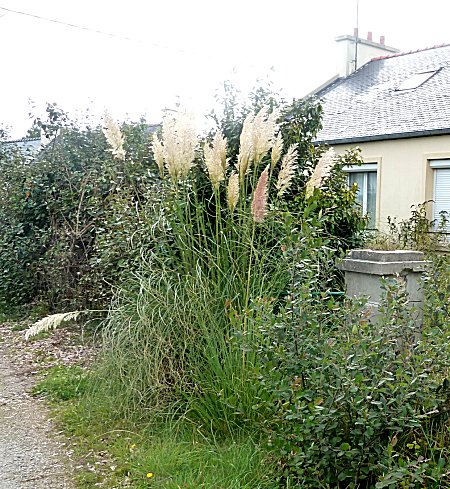 However, it is known that asthmatics can be very sensitive to pollen from this plant.

But above all, it is the source of another annoyance. 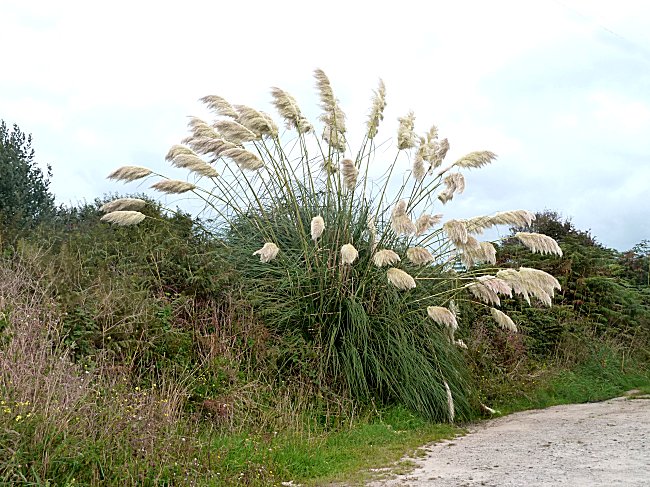 This boredom is the seeds that the pretty feathers will give to the wind. A wind that will carry them away, sometimes tens of kilometres away as they are so light. Each plant provides about ten million seeds ! These tiny dusts will probably sprout in the neighbour's garden, but also in nature, far from the garden or roundabout from which they have escaped. 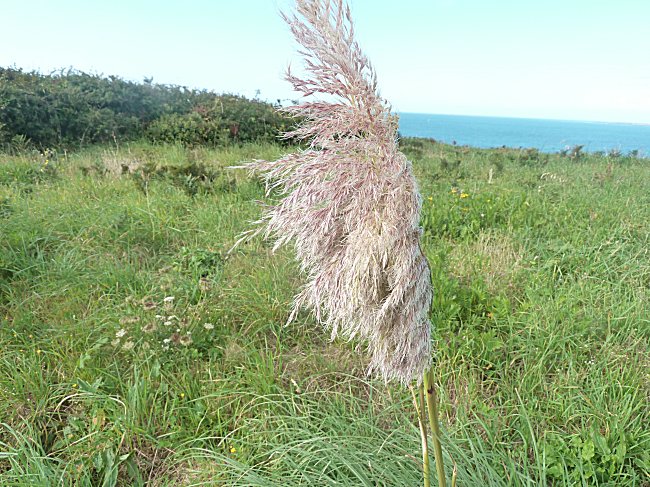 Thus new and equally prolific colonies of pampas grasses are formed very silently in meadows, in valleys, even along roadsides, whose rapid multiplication will inevitably lead to a change in the surrounding vegetation. Somewhat isolated areas, sheltered from human intervention, quickly become new nests of concentration from which this American grass will once again spread to the detriment of native vegetation. As it prefers recently disturbed lands, embankments, it is frequently seen colonizing slopes along railways or highways, especially in regions with a mild climate such as the Atlantic Pyrenees where it is so widespread that it is no longer an original decorative plant. Is this an effect of global warming ? We now see it developing rapidly along the Breton coast. 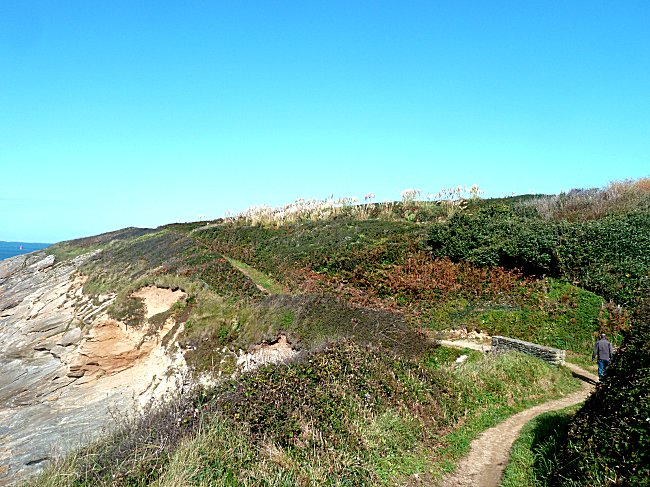 Le Conquet:  coastal path between Porsliogan and Le Bilou.
This pampas grass forest did not exist in 2014.
and was in great danger of colonizing the entire area.
Photos September 2015 . 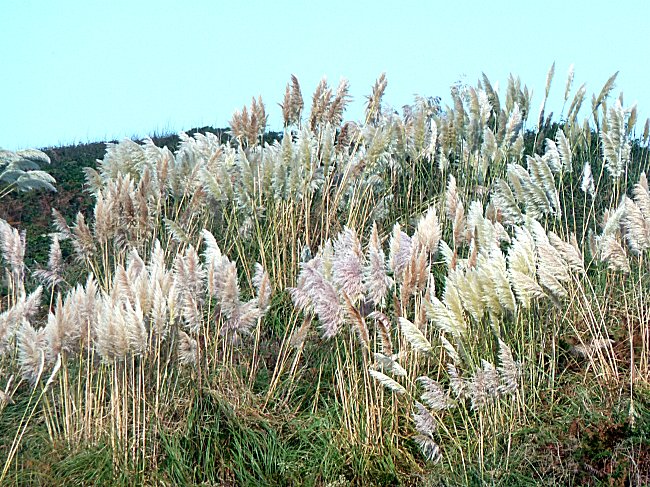 To avoid this incredible spread of seeds, it is obviously necessary to cut off the feathers before they mature, which takes place in autumn. However, this intervention is not easy to apply because in the middle of nature nobody really cares about it and in the gardens how to explain it to the owners who have planted these plantations precisely for the beauty of these pretty feathers? Each of us is tempted to keep them, without even considering the conséquences on the neighbouring garden and the environment. We close our eyes and let it... the Wind to do. 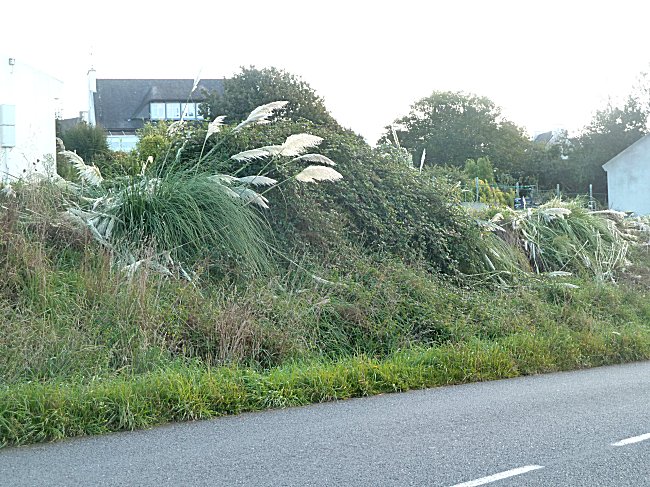 Brélès:  bent by wind and rain,
these stems seem not to be able to recover from the bad weather.
Don't get me wrong, at the first ray of sunshine they will straighten up,
finish ripening, and offer their microscopic seeds to the wind.
The plant, extremely resistant, created them for this purpose.

Thus, an ornamental plant ends up becoming a real and extremely invasive botanical plague that becomes more and more difficult to eradicate every year.
You have this pampas grass in your garden. To protect our environment, by any chance, you wouldn't also have a pruner ? But take some precautions when you come to cut the feathers at the end of the summer : the edges of the leaves are as sharp as razor blades. This may be another reason, if you have children, to permanently rid your garden of this invasive plant.

All photos were taken in September 2015. Since then, interventions have been carried out, particularly in Le Conquet, to limit the extension of this plant.


On the Internet:
Conservatoire Botanique

See the website of the National Botanical Conservatory of Brest
from which we have extracted the following eradication advice :

There are several ways to control the expansion of pampas grass :
- Cutting of flower stems should be systematically considered before seed dispersal.
- Depending on the extent of the problem, a more or less heavy mechanical treatment must be considered in order to remove the tufts. The machines used range from brush cutters to backhoe loaders. This technique is effective, especially when used sufficiently upstream, as it limits the spread of seeds in natural environments.
-  Chemical treatment has been used locally ( the most commonly used herbicides are glyphosate-based ). However, the General Council of Finistère wishes to prohibit the use of phytosanitary products because of the risks to the environment and health.
-  Information and awareness are a major strategic focus in the fight against this species. Eradication actions must be accompanied by a broader awareness-raising campaign to limit or better prohibit the use of this species on the periphery of natural areas as well as along community roads, roundabouts or green spaces. This phase of information to the public, administrations and economic actors ( nurserymen, landscape gardeners, natural area managers ) should make it possible to inform the population of the invasive nature of this species and the harmful effects it causes both ecologically and in terms of public health. To this end, a ministerial order to ban the spread of pampas grass was issued in March 2020. 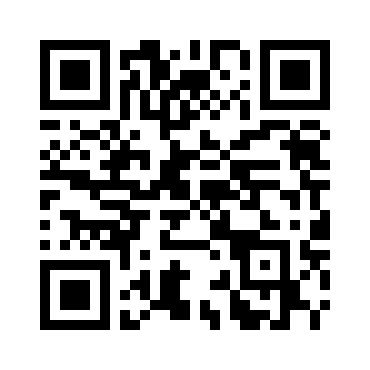