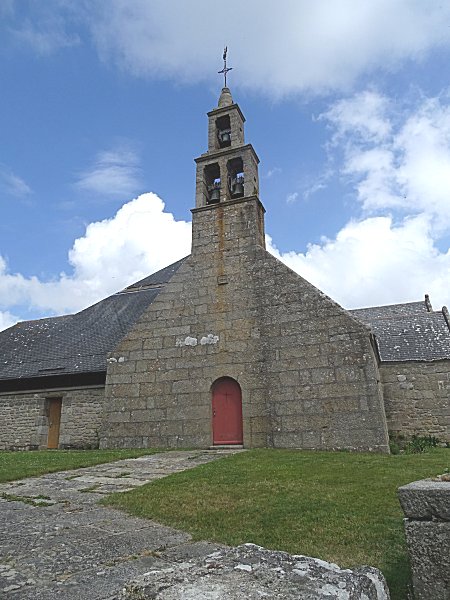 Access :
Park at the entrance of the village, on the church square. 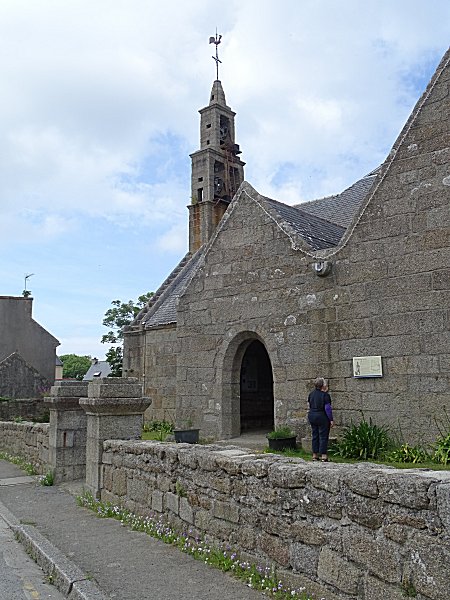 First of all, it should be known that this church was originally a chapel called San Sebastian Chapel. The St-Paul-Aurélien parish church was located closer to the sea and to all the houses in the XVIth century. However, poorly maintained and built on sandhills, it disappeared under the sands a little more with each storm and ends up being totally abandoned and so forgotten, that today its location1 is still unknown. From then on, in 1774, the St. Sebastian chapel, restored and enlarged, had been promoted to parish church and henceforth bore the name of St. Paul-Aurélien church.

Why that name? The tradition wants that in the VIth century, coming from Wales, Saint Paul - or Pol - Aurélien, after having landed Ouessant Island, would have reached the continent at Porspaul, the port of Lampaul-Plouarzel. There he founded a monastery, or oratory, which he placed under the direction of one of his companions, since known as Saint Kar or Saint Egarec. Paul-Aurélien would then have reached Lampaul-Ploudalmézeau, and then Batz island where it is said that he would have rid the population of a terrible dragon. We know that King Childebert Ist appointed him bishop and offered him the bishopric of Castel-Paol, the present St-Pol-de-Léon.
Saint Paul-Aurélien is considered as one of the seven holy founders of Brittany, whom the pilgrims of the Middle Ages worshipped during their 'Tro Breizh', the Tour of Brittany. 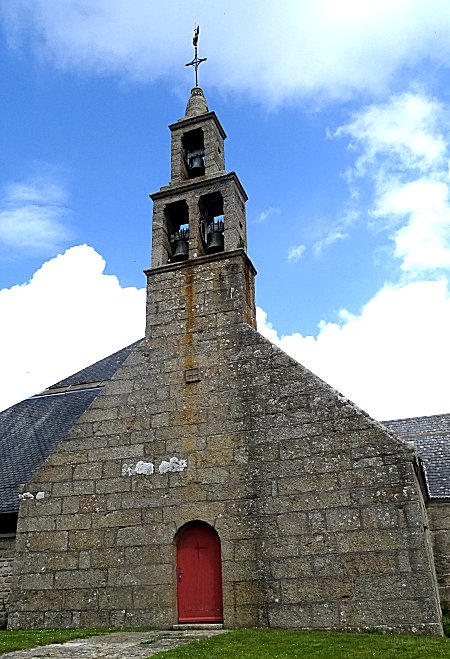 From its past as a simple chapel, as can be seen in the Saint-Egarec chapel, the church has preserved its bell-tower wall. Very sober, it presents at the top three openings occupied by the bells. Its only ornamentation is a stone bearing a cross engraved in relief in a frame and placed well above the portal, which could sign its construction by a noble of the XVIIth century. 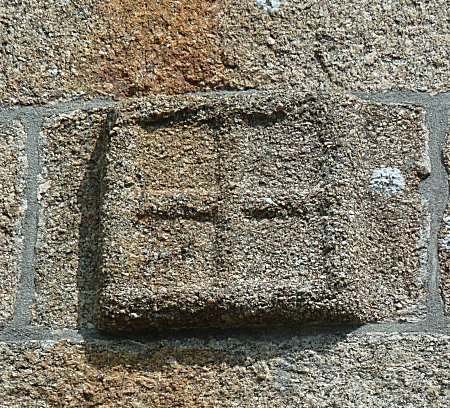 Near the entrance porch is an interpretation panel in french, which must be read to fully understand the building's current architecture. 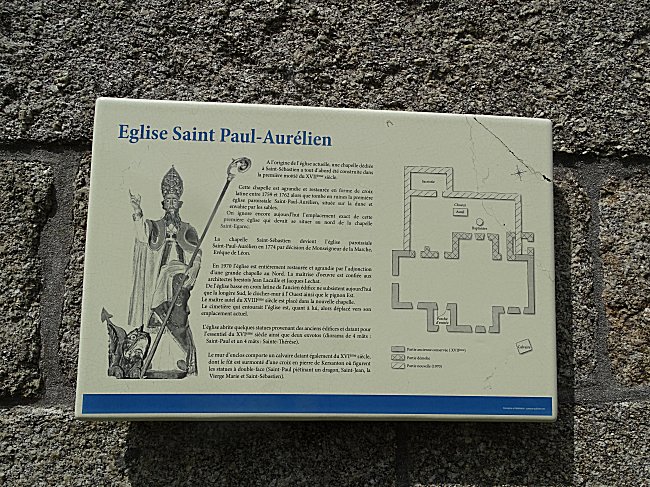 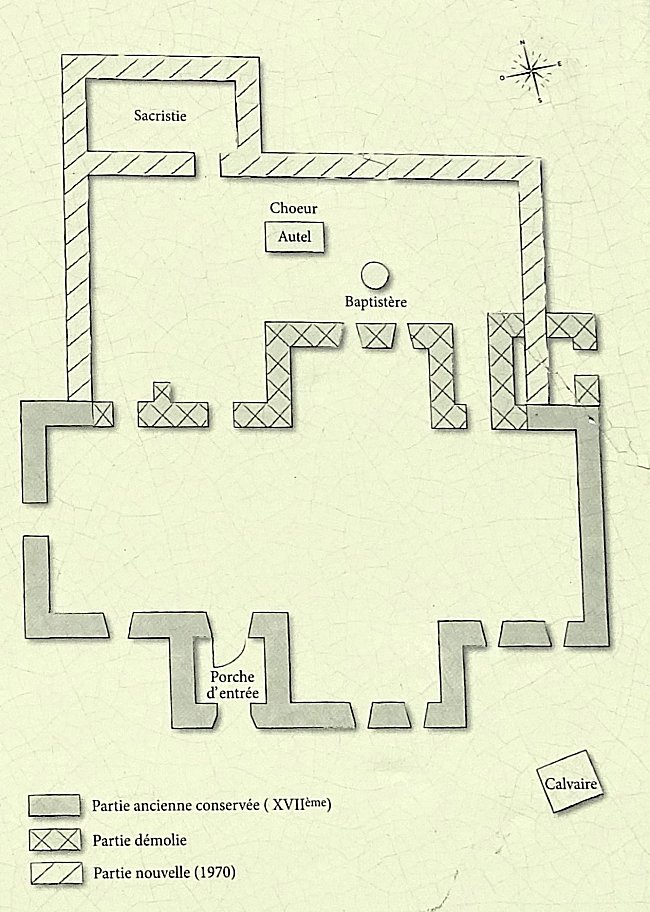 Indeed, the population of the commune having largely increased, great works were undertaken in 1970 in order to still extend the building. But the presence of streets and houses left no choice but to build in the north, in the cemetery. It was therefore moved further west, near the present town hall. Then the facade opposite the road was pull down and a large building was built which doubled the total surface of the church. The chancel once located to the east, turned 90° to the north, giving the whole nave a new orientation.

After crossing the porch and passing in front of the large built-in stoup near the entrance, the visitor enters the nave. He is immediately surprised, as much by the size of the nave as by the contrast between an exterior architecture of the XVIIth and a very modern interior. The nave, practically square, is both very large and unusual. 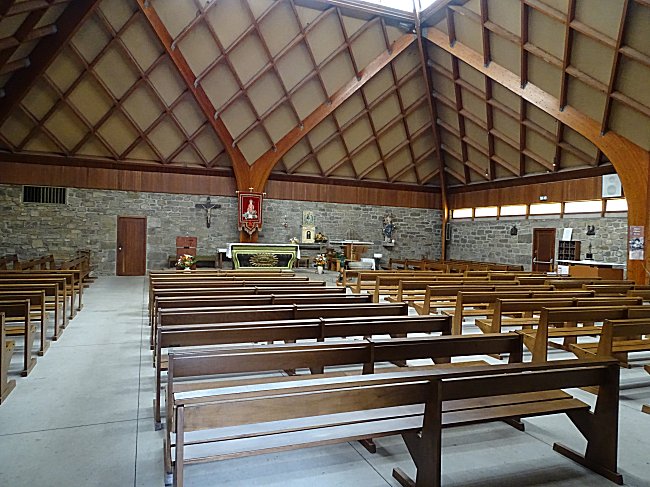 Thanks to an elegant lattice vault that rests on the walls, no pillar clutter the space. The absence of stained-glasses is compensated by a central glass roof and a serie of small openings in the side walls. The decoration and all the furniture are particularly sober. 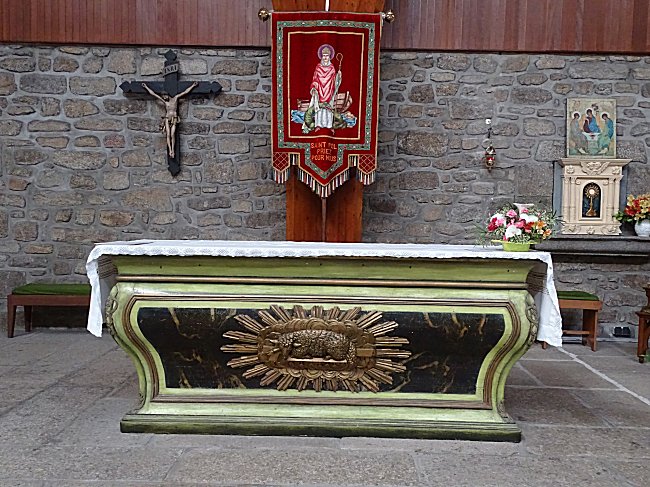 The altar in the shape of a curved tomb and decorated with the Paschal Lamb comes from one of the previous places of worship and fits perfectly into this ensemble. The same is true of the granite baptismal basin decorated with gadroons and the ex-voto, to which is added a recent Way of the Cross. This juxtaposition of ancient and modern elements does not shock. 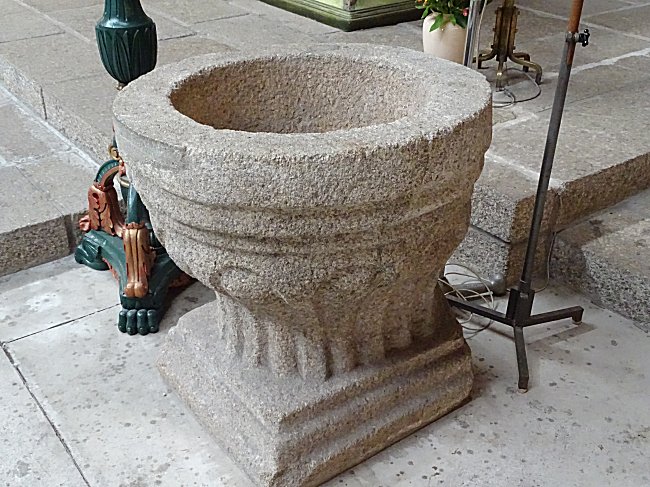 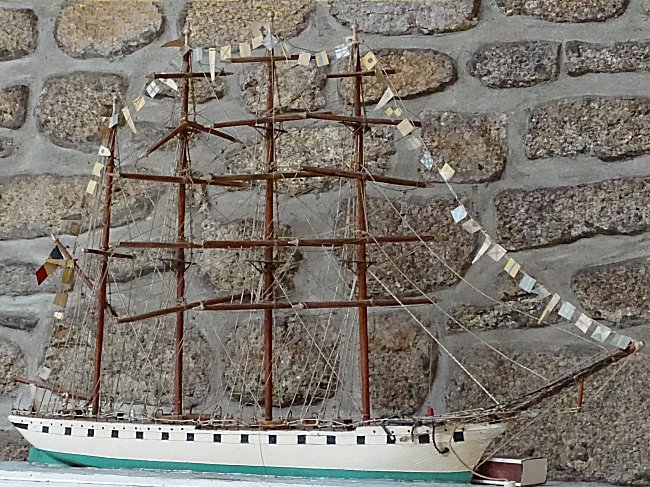 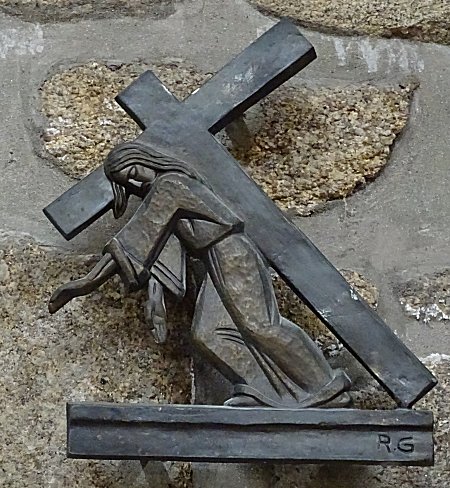 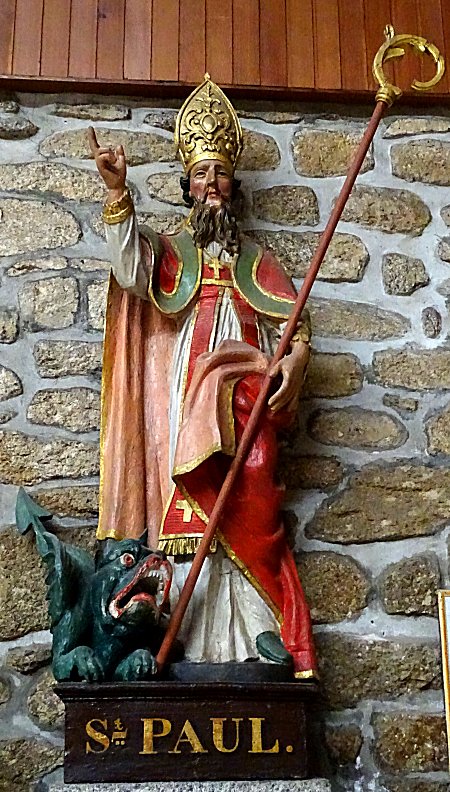 Saint Paul-Aurélien thrones near the entrance. He is always represented trampling the dragon of Batz island, which he would have compelled to throw itself into the sea. This statue of the XVIth century probably comes from the silted church which was dedicated to him.

To the left of the altar, we discover San Sebastian, riddled with the arrows of his martyrdom, This beautiful statue of the XVIth century already patronized this building when it was only a modest chapel.

To the right of the entrance, an ancient statue is enigmatic. 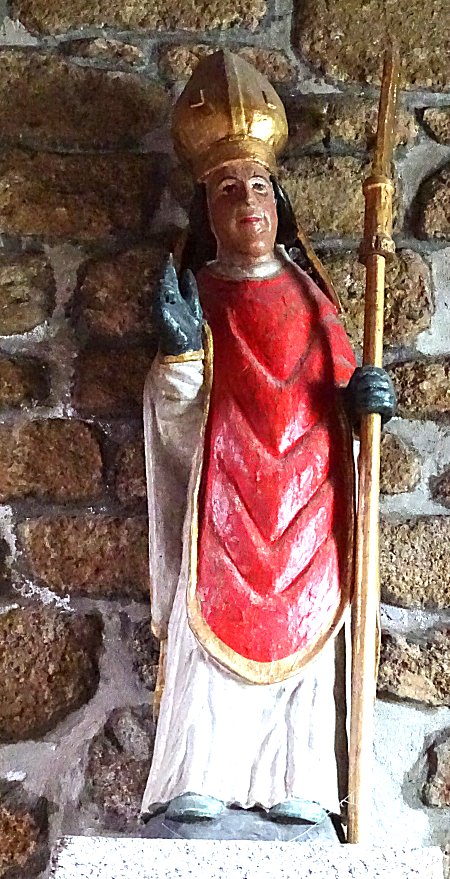 Its base no longer bears any name. And no attribute helps the visitor to identify it. It is perhaps Saint Egarec, in Gothic chasuble, already represented with mitre and bishop's crosier in the chapel of the same name.


As we leave the building, we will not fail to take a look at the confessional located near the entrance. Built to measure in this space, it probably dates from the transformation of the chapel into a church. 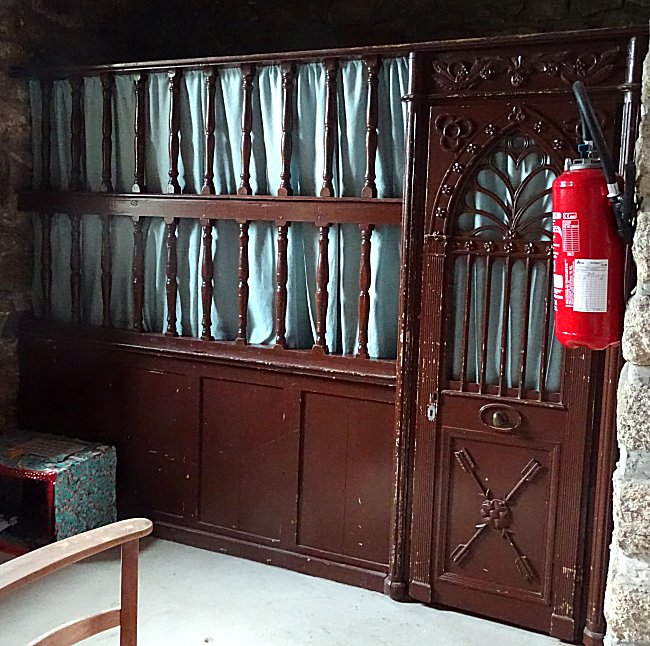 And outside, it is also advisable to observe the calvary erected on the wall of the enclosure. The cross of the XVIth century in kersanton stone supports two twinned statues of Saint Paul-Aurélien and his dragon.

-1- There is still a street called in Breton Hent an Ilis, Church street, between Porscave road and the sea. But this place seems too far from Lampaul Goz, the old Lampaul. This one, located south of Porspaul street, comprises a district named Kerbeleyen, the village of the priests, which seems better to suit the emplacement of the previous church. 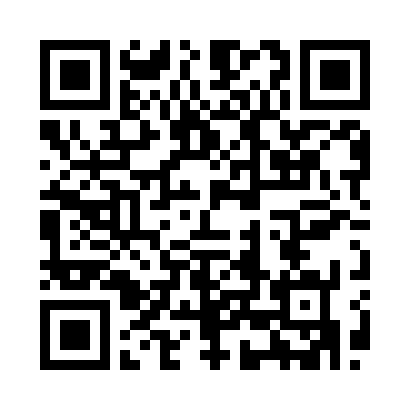