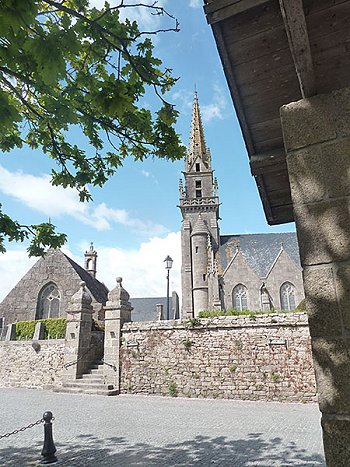 Access: Park preferably on the town hall's large car park and walk to the church.

The name of the commune ( plou = parish, arzel = St Arzel) comes from that of a Breton saint also called Saint Ourzal. At the beginning of the VIth century, during the Breton emigration to Armorique, he would have reached the south bank of the Aber Ildut and founded there a monastery. Then pursuing a wandering life in order to evangelize the population, he would have criss-crossed Brittany and several localities today bear his name. Legend has it that he killed a dragon with only his stole and holy water as his weapons. The church of Plouarzel is dedicated to him, as witnessed by the statue that dominates the entrance of the building. 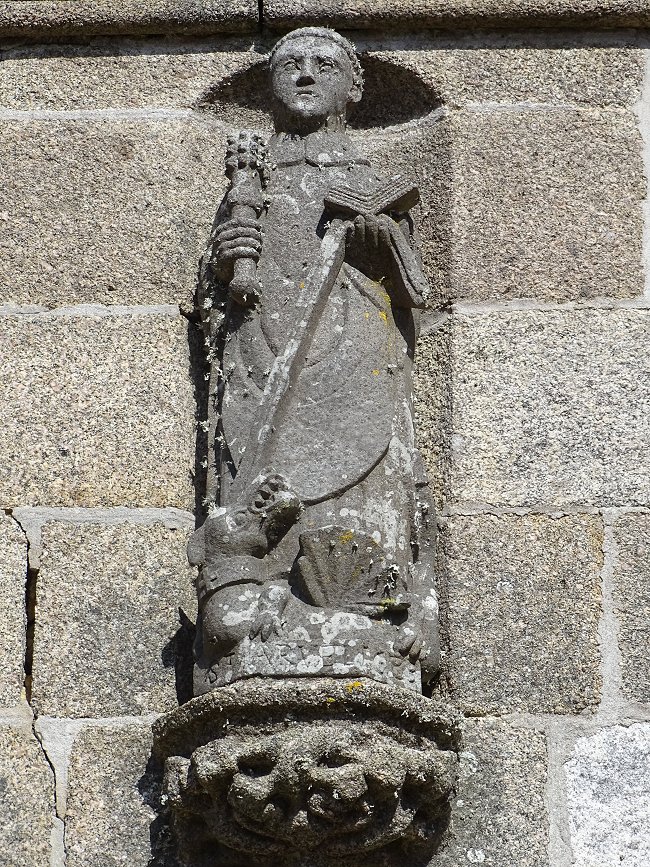 Saint Arzel carrying a scroll of parchment, holds on a leash with his stole
a winged dragon with threatening fangs.
( Kersantite statue 1 dated 1689, from the old church).

The present building replaced in 1902 an old building from the end of the XVIIth century destroyed by fire in 1898. The fire had been accidentally caused by the verger and for four years a temporary wooden church had allowed to continue religious services.
The bell tower, 36 m high, is attached to the western end of a Latin cross building. It rises above the entrance porch, flanked by a turret that houses the staircase leading to the clock and from there to the gallery and then to the bell room. 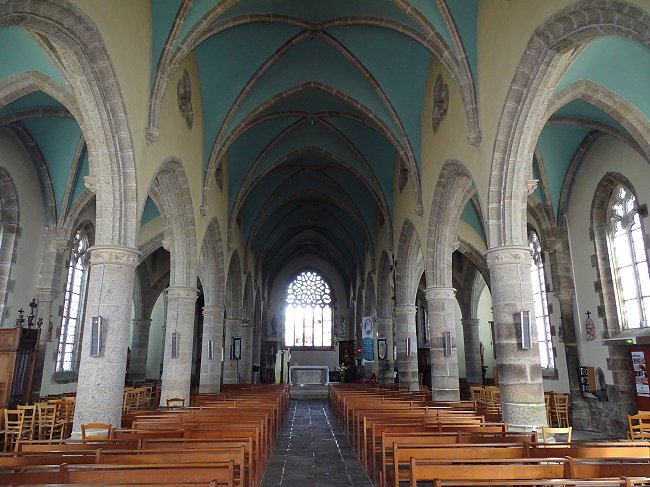 The interior of the church is vast. The vault rests on neo-gothic ribs supported by granite columns. Six 13 m high spans with aisles precede a wide transept of two spans, a choir of two other spans with aisles, and a flat chevet decorated with a large stained glass window by Léon Payan2 dated 1900 and whose theme is the life of Saint Arzel. 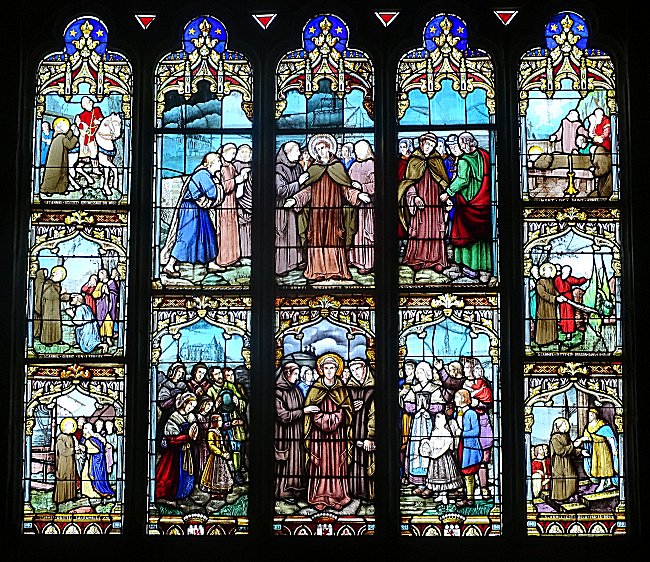 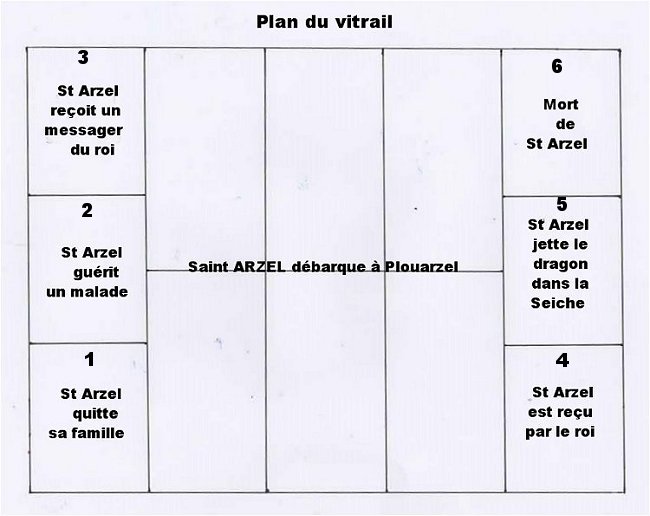 A bas-relief representing the Last Supper adorns the front of the high altar... 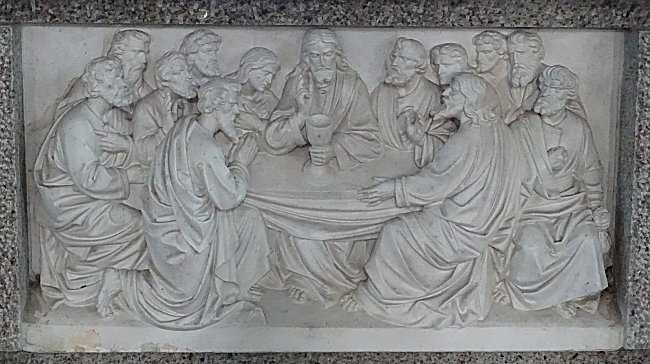 ...and beautiful wood carvings coming from the pulpit to preach. They represent the evangelical apostles: Saint Matthew and his angel, Saint Mark and the lion, Saint Luke and the ox, and finally Saint John accompanied by an eagle. 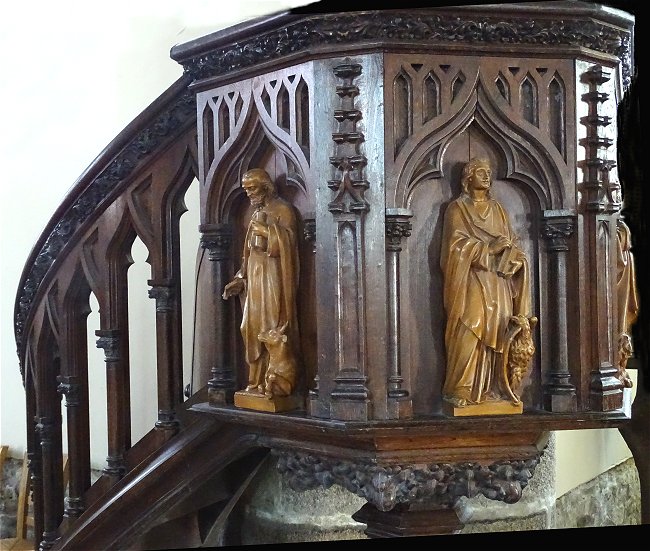 On the walls are the 14 stations of a Way of the Cross acquired in 1902, which have since been taken out of their old frame to make them more modern. 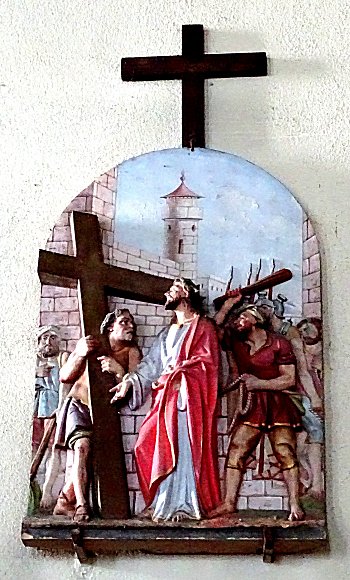 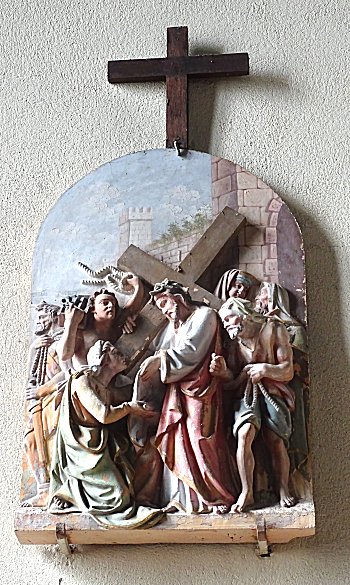 During the fire of 1898, very little furniture was saved from the flames. The statues that adorn the nave and transept are therefore not very old.
However the visitor will not fail to come to admire in the transept the magnificent Pietà which constitutes the main ornamentation of the church. Carved in wood, 1.40 m high, painted and gilded, this late XVIth century work, the author of which is unknown, was restored in 1967. 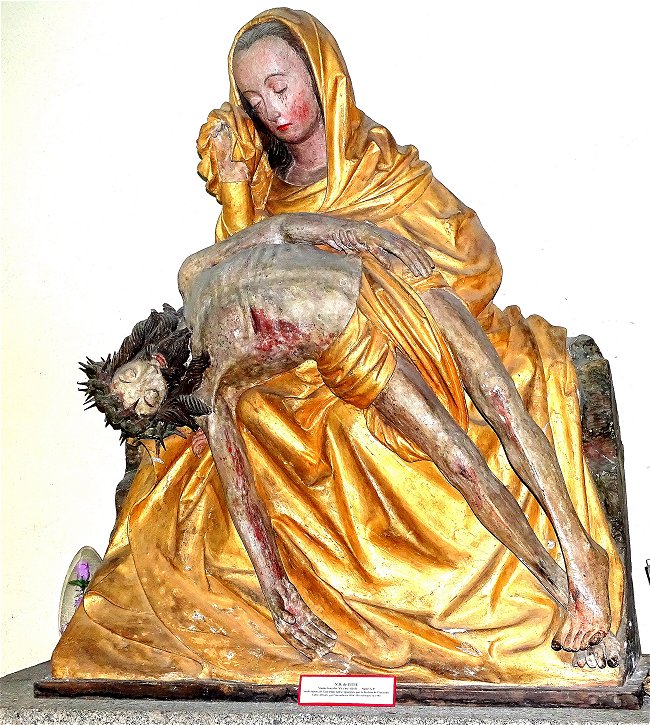 The Virgin of Mercy

Carved from a trunk only 40 cm thick, this polychrome Virgin of Pity appears slightly out of balance: for lack of space, Christ's body seems to slip from his mother's knees. However the expressions of the faces are translated in a remarkable way. The mother's, full of pain and resignation, shows tears that she is trying to wipe away. His son's, still crowned with thorns, his eyes closed, is frozen in the tranquility of death. The contrast is striking between the calm of these two faces and the suffering violently expressed by the thinness of the body, the bleeding wound and the still nailed feet of Christ. 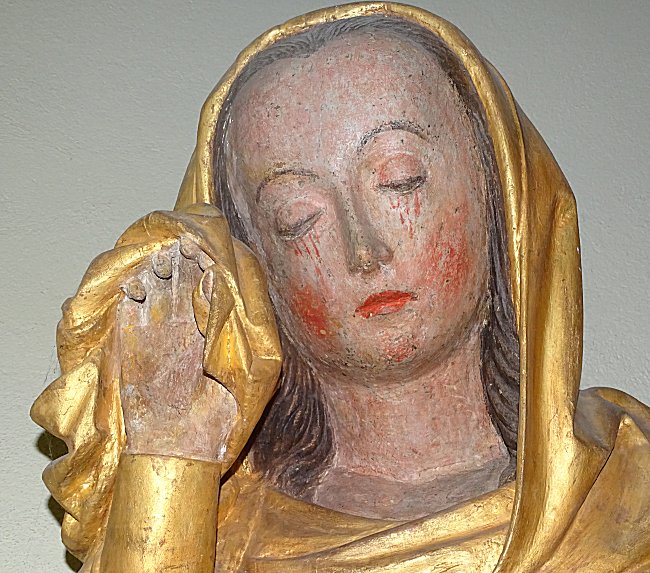 Outside, we will take a look at the 18 gargoyles, all different, which decorate the monument and which already were on the old church. We obviously regret that they are denatured by the unsightly neighborhood of zinc gutter elements. Technical progress does not always go well with heritage. Representing monstrous birds, these gargoyles which threw rainwater out of the walls were thus supposed to preserve the sacred building from the Demon's attacks. 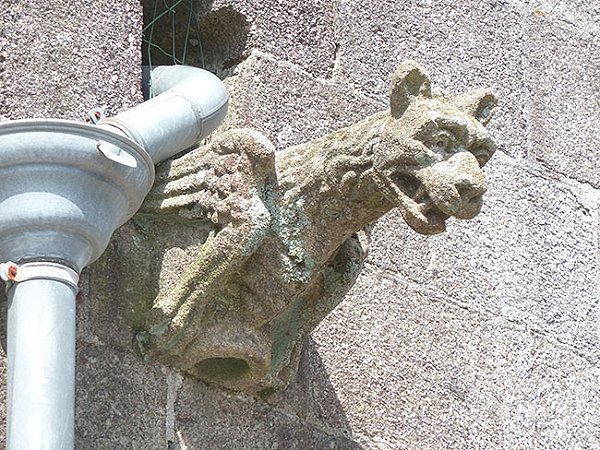 For centuries the church is located in an enclosure comprising the cemetery, several crosses, a statue and above all a remarkable building that houses both a chapel and an ossuary. 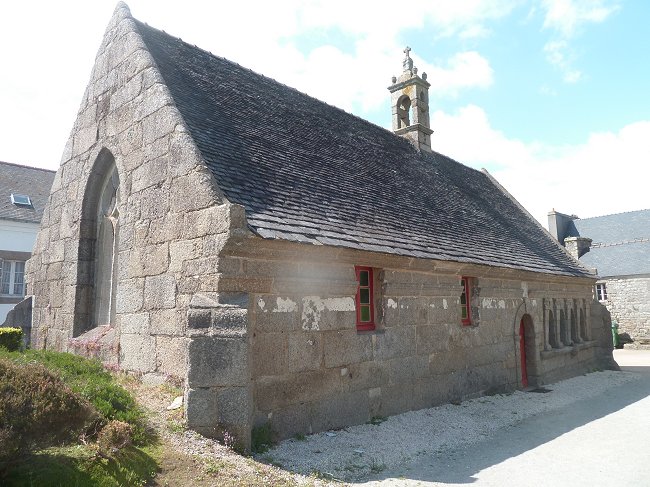 This building restored in 1994-1995 has been listed as a Historic Monument since 1928. Its construction would be prior to 1607, date recorded on a stone which blocked one of the openings of the building. Its south façade extends the wall of the enclosure along the street. Its two parts are separated by a partition wall that supports a bell tower formed by a square lantern and a dome.

The ossuary
( closed to the public )

Bones from tombs to be reused were once kept there. Today it is a material depot. It was accessed through the north gable door framed by two windows. These openings are surmounted by semicircular arches. A stoup is embedded in the wall near the entrance. The interior is lit by 4 twin bays bordered by 5 pilasters resting on a projecting support which includes in its middle another built-in stoup. In the past, as the windows were not glazed, one could pray from the outside and throw holy water on the bones of the deceased. 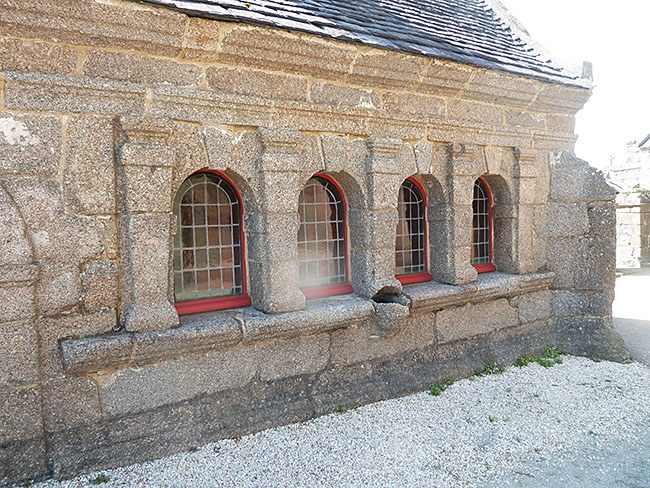 Dedicated to the patron saint of the legal professions, the neighbouring chapel is lit by two rectangular windows on the east side and by a flamboyant opening with a stained glass window in the south gable of the building. It has for access a door surmounted by a semicircular arch. Above it is the location of an escutcheon that has been hammered. Similarly, a white band interrupted by the windows extends from the door to the gable. This band constitutes all that remains of a liter, that is to say of an old funeral ornament comprising the armorial bearings of the noble families. It is probable that these degradations were committed during the Revolution. 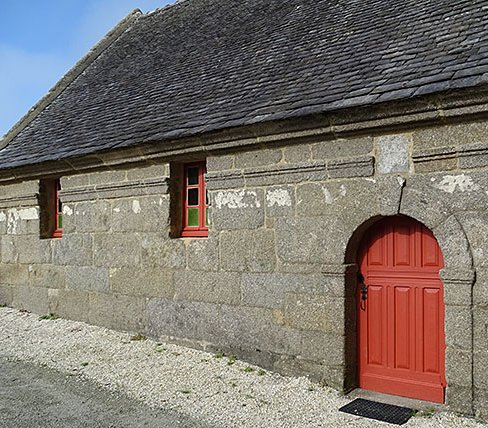 The interior, very sober, is no longer used for worship. Behind the door, a third stoup is embedded in the partition wall.
In the background, the south stained-glass window illuminates the whole room. 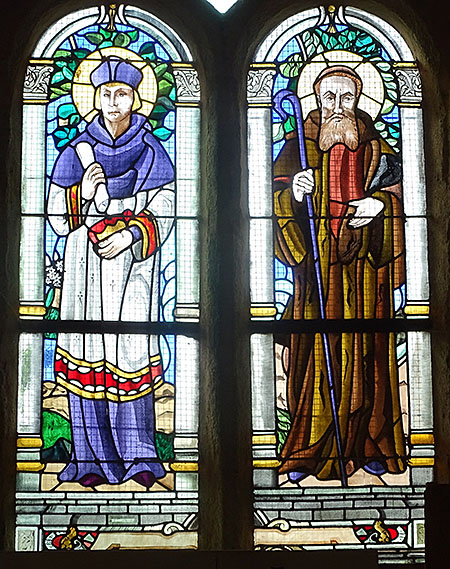 Other statues are fixed to the walls. Again Saint Arzel ( writed St Armel), trampling underfoot a dragon, St Laurent of Rome ( writed St Lorans) carrying the grill of his martyrdom and finally Saint Mamert ( writed St Memor as in the former abbey of Daoulas) carrying his crosier of bishop, then archbishop of Vienna. One will notice the astonishing similarity of the faces, no doubt betraying the work of the same artist.

The Calvary and the Stele

Leaving the St-Yves chapel, one finds oneself in the cemetery where a calvary of the end of the XVIth century is enthroned. It is 6 m high and consists of two different rocks: the granite of the Aber Ildut for all the lower part and the kersantite for all the carved parts. The statues of the capital are, to the west that of Saint Arzel still holding a dragon on a leash and to the east that of Saint Laurent holding his grill.
On the west side of the cross we recognize the Virgin and Saint John.
The cross bears a crucifix on the west and a Christ offended on the east.
The capital also bears two escutcheons, one fascé Or and Gules of the Du Chastel, lords of Trémazan and of the most part of the Leon country.   ( The castle of Trémazan)
The other escutcheon is that of the Kerlec'h, lords of Lanhalla. The inscription was engraved on the occasion of a mission in the parish.
It should be noted that in 1973, a storm having thrown down the cross and the sculpted figures, the restoration work was entrusted to Joseph Arzur, a 63-year-old municipal employee, who had no other qualification than his reputation as a patient and conscientious man. He laboriously assembled and cemented the dozens of pieces recovered and his invisible work still defies time since that date. 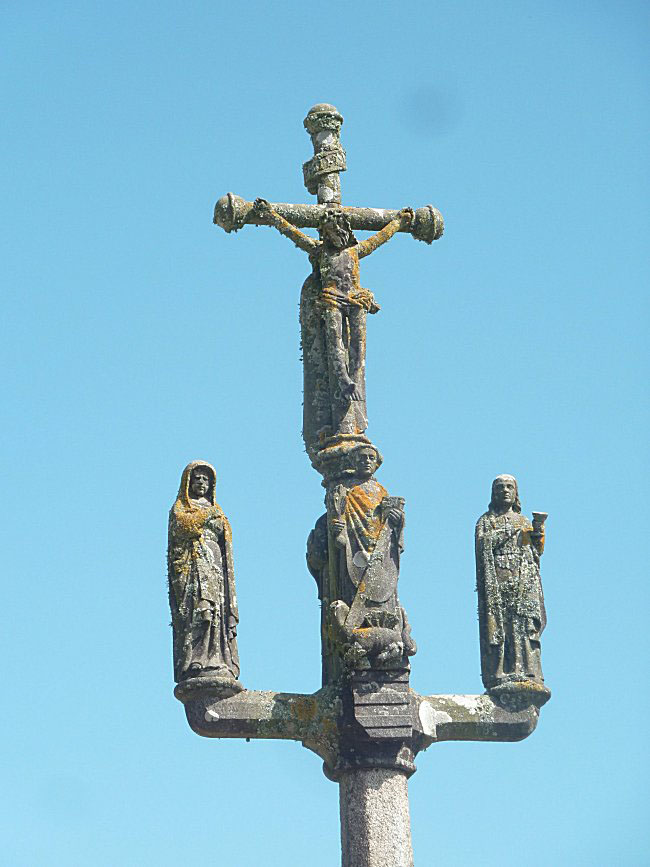 Finally, on the other side of the church, at the very back of the new cemetery, another cross deserves a glance. Indeed it is a small monument made up of two parts:
- One is made of granite, carved into stele in the Iron Age, i.e. well before Christianity, around 400 or 500 BC.
- A serrated cross probably dating from the XIVth century. For more details on this Christianized Gallic stele see our page on the cemetery stele. : cemetery stele. 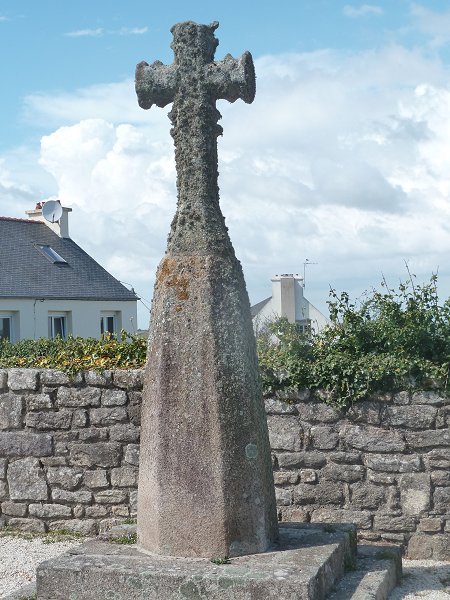 -1- Unique in the world, kersantite is a magmatic Breton rock close to granite. It owes its name to the hamlet of Kersanton in the commune of Loperhet where it was exploited. This very hard stone, of greenish grey colour, bluish grey with almost black according to the careers, is very appreciated by the sculptors for its smoothness and its longevity in front of bad weather.

Léon Payan designed and made the stained glass windows of a large number of churches and chapels in Brittany. For more informations on this artist and his work, see the very documented website dedicated to him :  Léon Payan website


In Plouarzel, the cultural association 'Tre Arzh' regularly publishes the magazine Plouarzel Tud ha Bro concerning the heritage of the commune. These brochures in french are available at the media library and by mail from the association. No. 23 is dedicated to the parish enclosure and the church. 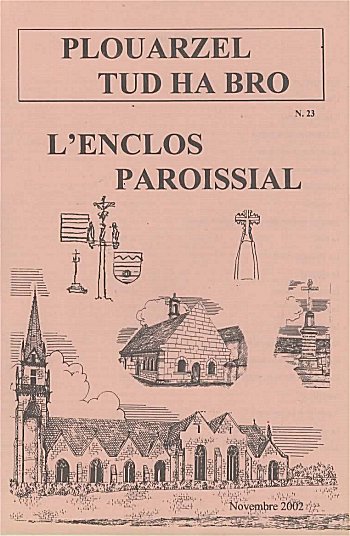 We will also find on the website of Wiki-Brest a very complete study in french concerning the church of Plouarzel realized by Pierre ARZUR ( Wiki-Brest). 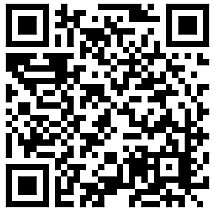