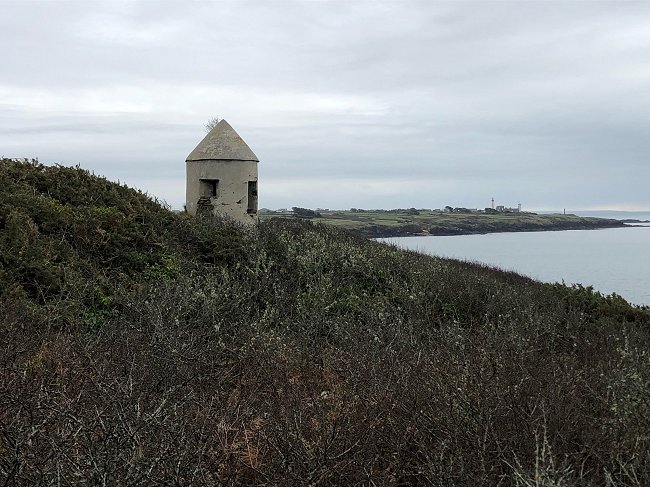 This turret which dominates the sea on the coast between Le Conquet and St-Mathieu often intrigues walkers who follow the GR-34 path. It can only be seen from a distance because although the coastal path runs along it, it disappears completely behind the coppices and its access is well hidden. 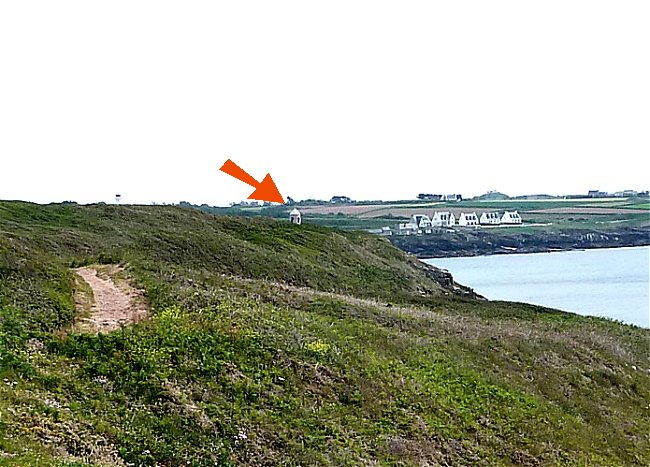 Access : At the exit of Le Conquet towards the tourist road, St-Mathieu and Plougonvelin, turn right towards Portez beach and park nearby. Then take the GR-34 coastal path on foot, which climbs to the left of the beach towards Pointe des Renards. The picture above is zoomed in from this location. But the access to the Bilou sentry box is 400 m further on. Continue on the GR-34 until you reach a major turn of the path bordered by high coppices on the sea side. There are two passages through the hedge. The first, on the right, leads to the box, the second, opposite, to the ruins of an old guard house.

Let's go in front : we immediately reach the ruins of a large building. 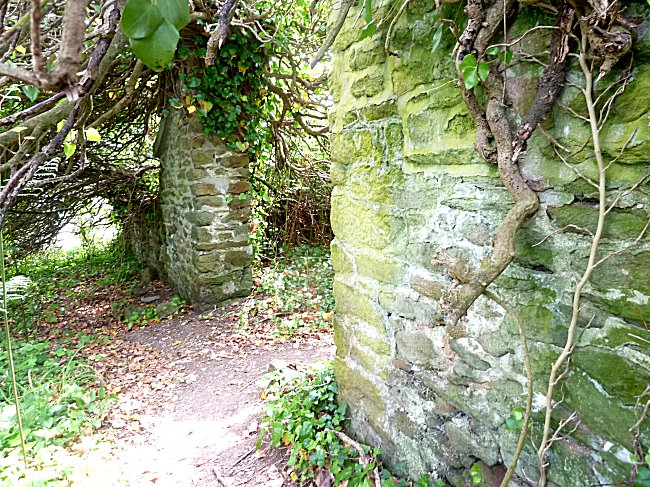 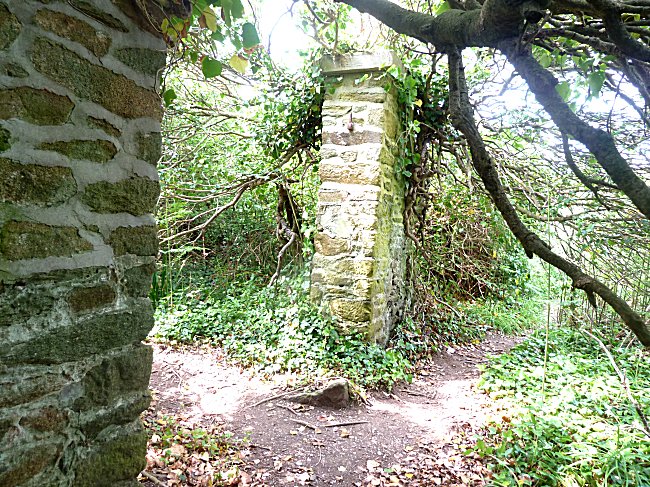 This building, of which there is not much left, was a guard house capable of housing 24 gunners. His story is told in french in his blog by Jean-Pierre Clochon, historian of Le Conquet. The building, which was not invaded by vegetation as it is today, was a landmark during the Second World War on a bare coast. It was therefore destroyed by the Germans. 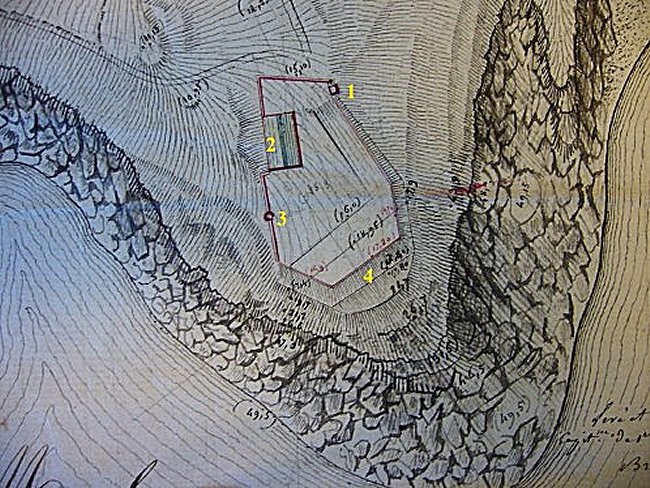 On the map above, the guard house building is in 2 and the sentry box in 3. A large artillery terrace, now covered by coppice, is in 4. In 1, the ball blush furnace was not found.

There is no need to go any further because the thickets are inextricable. To get to the box, you must return to the path and take the first passage through the hedge. 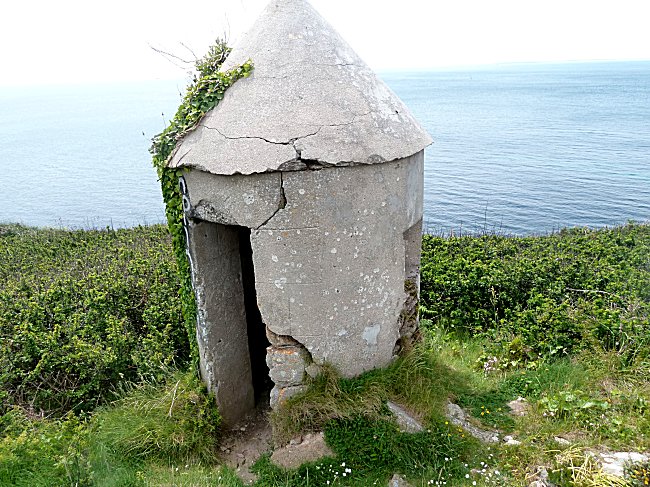 The sentry box is a 2.40 m high cylindrical turret on which rests a 1 m high pointed dome-shaped roof made of cemented stones. Tagged and attacked by ivy, it has not been restored and its condition is worrying. On the sea side, where the slope is steepest, a collapse of the earth even reveals part of the suspended structure above the void. 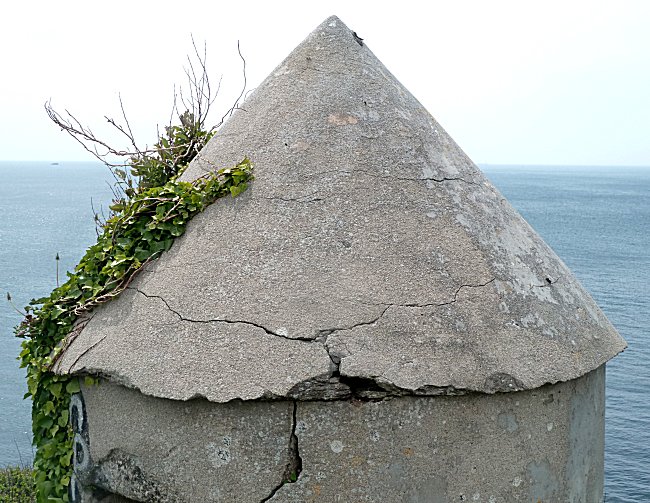 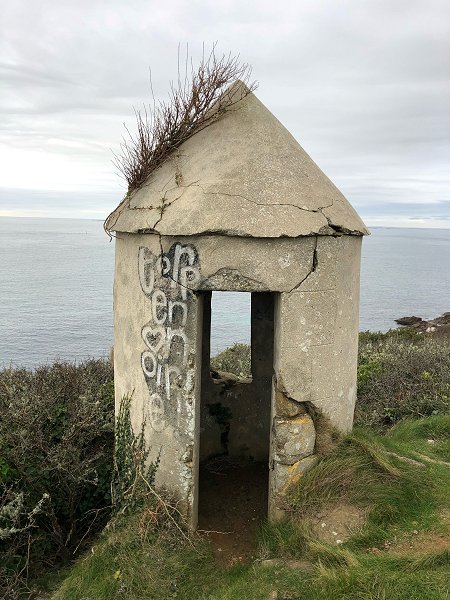 A narrow 50 cm opening has been provided for the door. Its height is 1.75 m. If, on the outside, the diameter of the turret reaches 1.84 m, it is surprising to note that inside the watchman only had a space of 1 m. The wall is 42 cm thick. Three largely shattered openings towards the outside allow to watch the sea as well as the coast. Their splay is sufficient to fire in all directions with a rifle. 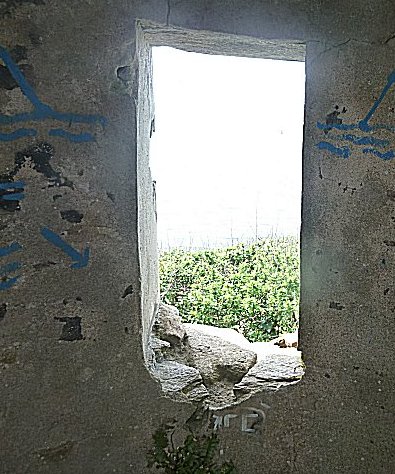 The widest window overlooks the sea directly. Its support is very degraded. 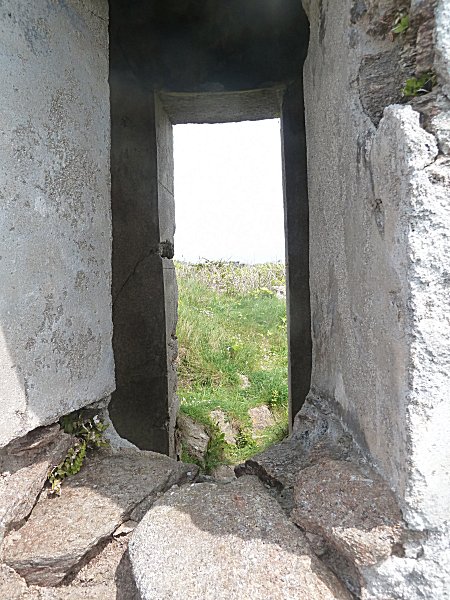 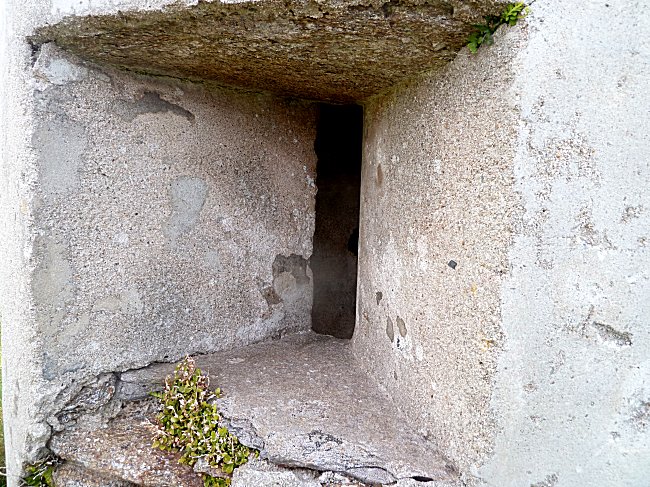 In the 1990s, the FLNJ (Front de Libération des Nains de Jardin) jokers had stored in this box an impressive quantity of garden gnomes that they had kidnapped in the region. The case had made a lot of sensation at the time and the police was able to return the escaped gnomes to their inconsolable jailers.

The Bilou sentry box is obviously an element of our military heritage that has been abandoned for a long time. This is due to its location on a private land where it is of no use to its owner. However, it would be necessary to maintain it so that this testimony of our history dating back to the Seven Years' War under Louis XV does not end up falling completely into ruins. 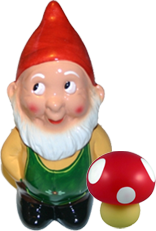 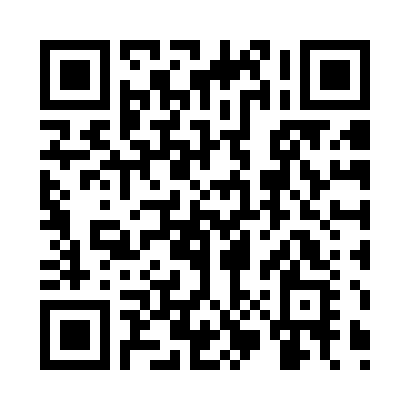