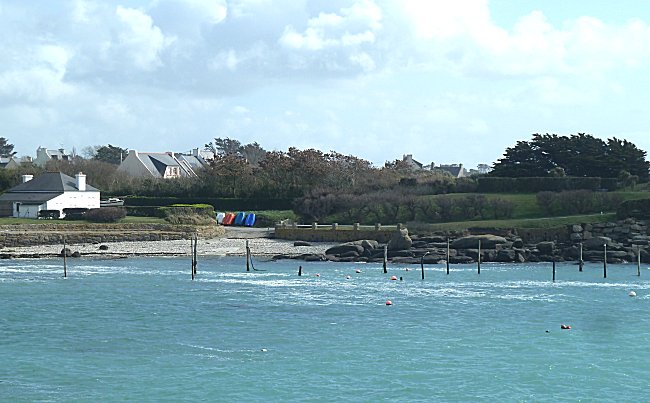 Access :   On the D 27, in the North-South direction, 2 km after the village of Porspoder and before the port of Melon, turn right onto a signposted street "Port de Mazou". Turn left towards the hamlet of Mazou and park at the end of this road.
Larger vehicles : Difficult or even impossible to turn back in the hamlet of Mazou. The road is narrow and dead-end. Park near the crossroads at the end of the road from the D 27, or take the first small road ( Quilvit road), opposite, leading to the sea. The result is a point where the space is larger to make a U-turn and from where the view is superb.

Mazou is a small port surrounded by rocks, facing the islet of Melon, and well protected from heavy swells. The walker who follows the GR34 crosses it to take the same path on the other side. But as he passes, he often stops, amazed : what is the use of these vertical stakes that come out of the water? 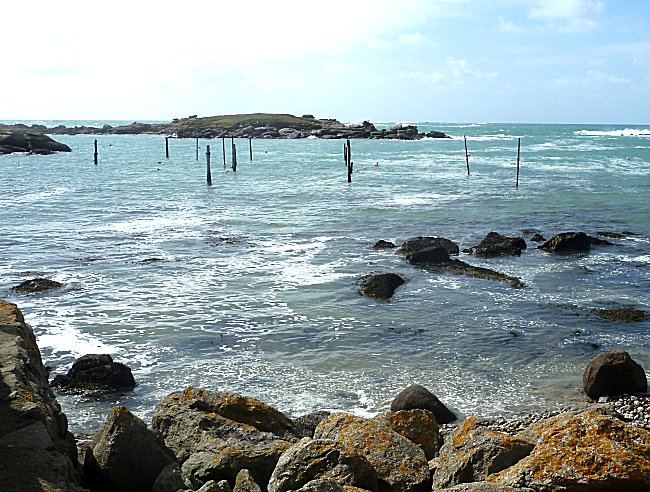 To find out for sure, let's approach them at low tide. 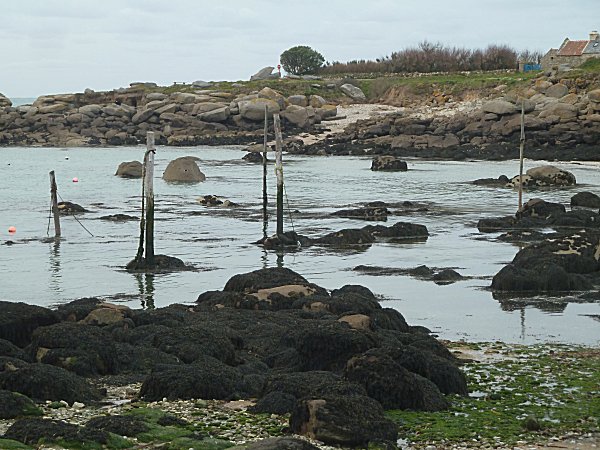 These posts, 6 to 8 m high, are precisely what makes this small port so original, nestled at the foot of a few old houses of the seaweed gatherers. They are simply used to moor boats. This system, as old as the world, is traditional in the Nordic countries. It can only be found in two places in Brittany : at the port of Gwin Zegal, in the municipality of Plouha, in the Côtes d'Armor, and here in Mazou. 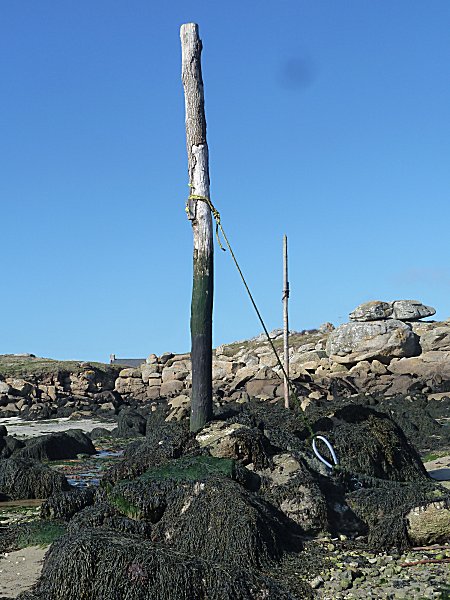 In the past, an elm tree, more rarely an oak tree, with a straight trunk and lopped off branches, was chosen and planted with its shortened roots in a large hole one metre deep dug in the sand. Then the roots were covered with large stones moved with the mine bar and the trunk was wedged with several large boulders. A mooring post last on average about ten years.
When it was eaten away by the sea at its base, and if its length allowed, it could be shortened and replanted. But then the roots had to be replaced by stainless steel bars that were bolted to the wood.
A large chain 5 to 6 m long and 2 to 3 m high is always attached to the pole to moor the boats with a shackle.
For a while it was customary to replace the trunks with old telephone poles equipped with the same cross pieces, but today we prefer to go back to the old method by adding the cross pieces. The mechanic excavator has, of course, replaced the spade and pickaxe. 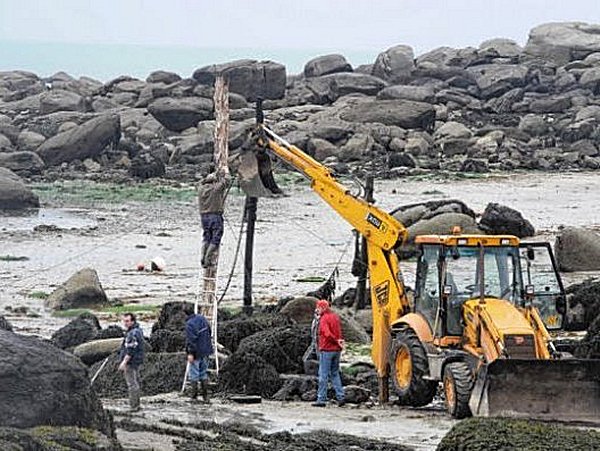 Replacement of a post in Mazou in 2014.
Photo Le Télégramme.

And for more safety a little concrete is poured at the foot. Thus the tradition is respected, but the technology evolves. 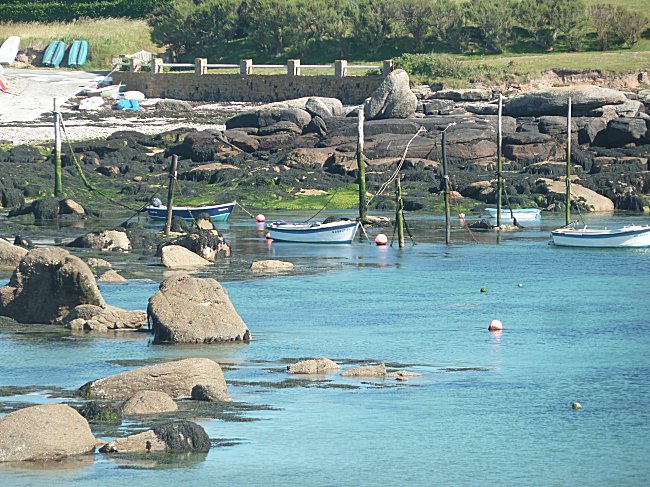 As for the boats, they are no longer those of the seaweed gatherers, ( they were here about thirty), nor even fishermen, but those of the yachtsmen who moor in this way, as in the past, one rope in prow and another at the backside, between two posts.
And the inhabitants of the hamlet, well aware that this centuries-old tradition is part of their heritage, want above all to preserve it. 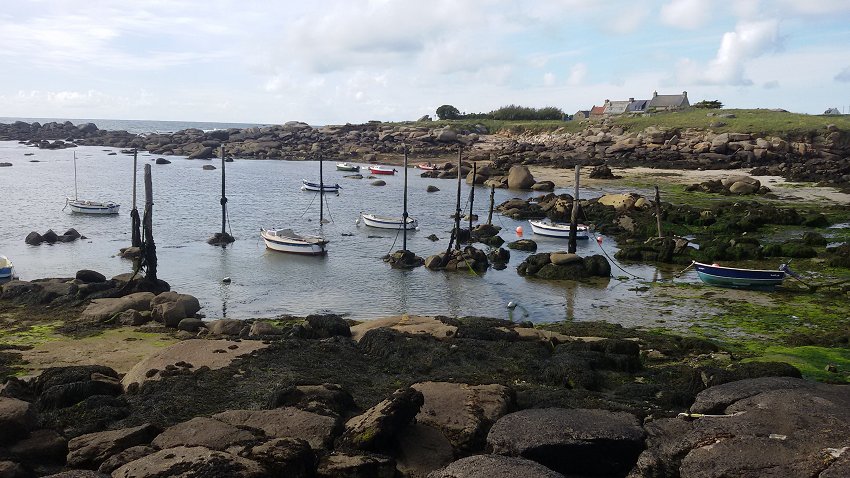 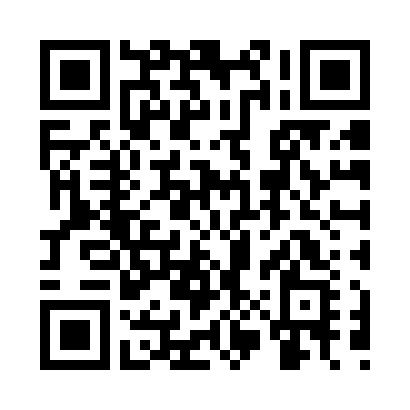