The former semaphore of Kerhoazoc 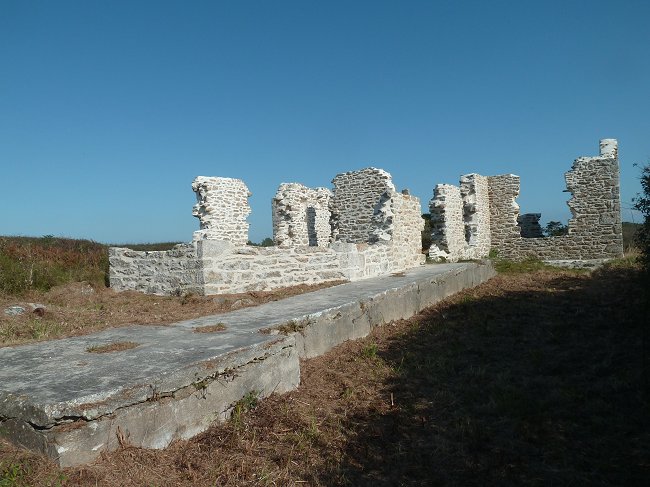 Access :   The ruins of this former semaphore can be seen from the Landunvez tourist road (D137). Leave St-Renan by the road to Ploudalmézeau (D68) and continue straight to the sea at Argenton. Then turn right on the D27. At a crossroads located 1.5 km further, turn left onto the D137 signposted "KERSAINT par la route touristique". Then follow the coast. At the top of a hill, we discover a magnificent maritime panorama. Park there. The ruins are on the right in the moor, behind a coastal mark whose base has been tagged. They can be reached by foot. 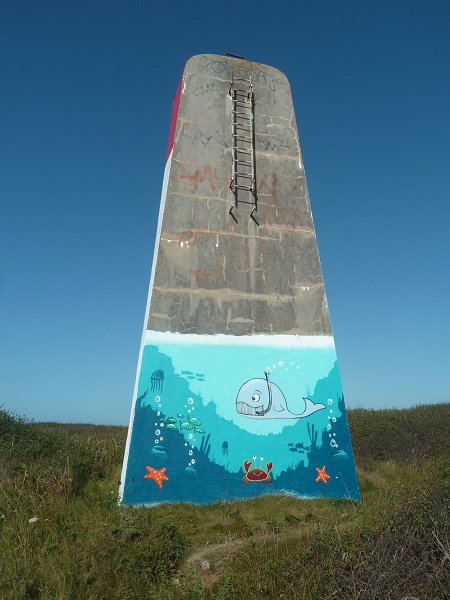 When we talk about semaphore, we obviously think of Claude Chappe's invention during the French Revolution. This young engineer developed with his brothers a system he called "telegraph" that allowed him to transmit by signs from one point to another 92 numbers referring to a 92-page lexicon, each containing 92 numbered words. Using signals on a mast equipped with articulated arms and read with a telescope, it was sufficient to transmit two numbers, the first for the page, the second for the word number. This was how sentences were composed. Decided in 1793, a first line of these semaphores was installed between Lille and Paris. Each station recopying the signals of the previous one located about 7 km away, this system enabled the Parliament called "Convention", in 1794, to learn in less than an hour of the french victory of Condé-sur-Escaut over the Austrian army. In the other direction, orders could be transmitted to the armies much faster than on horseback. Different systems allowed them to be encrypted.

Claude Chappe's invention was quickly perfected by Charles Pillon ( or Dupillon 1) then applied to the Navy by Louis Jacob in order to install along the French coast a whole series of semaphores equipped with 4 articulated arms. The numbers displayed corresponded to entire sentences in lexicons. Observers could thus, from the coast, quickly send their observations to the Maritime Prefecture or the latter could send orders to the remaining warships in sight, after a warning cannon shot launched by the semaphore.
In the Iroise Country, the one from Kerhoazoc to Landunvez was the most northerly. To the south followed the semaphores of Porspoder, Corsen in Plouarzel, Les Renards in Le Conquet, Saint-Mathieu and Bertheaume in Plougonvelin, not to mention that of the island of Molène 2. Via Le Minou and Portzic, they communicated with the Maritime Prefecture of Brest. The semaphore of Kerhoazoc could also be connected with the semaphore of Ushant or Aber Wrac'h.

It was in 1845 that the American Samuel Morse invented both his alphabet of dots and dashes and his handheld manipulator capable of sending short and long electrical signals. In a short time the "electric telegraph", thanks to a cable, replaced the aerial one. He also equipped the semaphores, but until walrus communications were made by radio, called from TSF ( Wireless Telegraphy), the four-armed Dupillon mast was retained in addition to the usual set of flames and flags for communicating with ships. 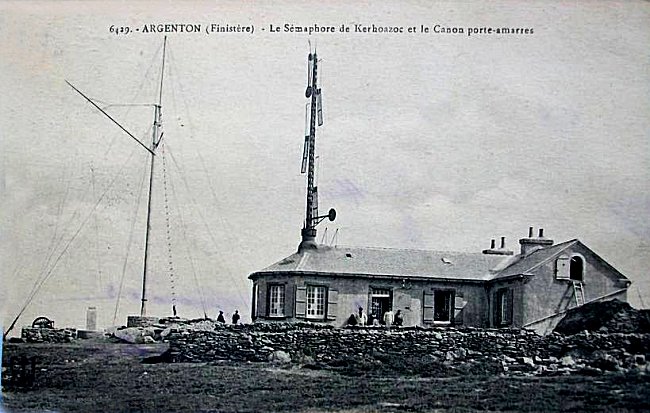 Postcard representing the semaphore of Kerhoazoc in the 1930s.

A Dupillon mast surmounts the building.
A radio antenna is installed on the left on the terrace
above the flagpole.

On the left we can see the canon intended to warn the ships
hat a Dupillon message will be sent to them.

It was Napoleon who, in 1806, decided to build the semaphore rosaries. Most of those located on the coast replaced former guard houses dating back to king Louis XIV. In 1860, the Admiralty of Brest decided that each semaphore would be designed on a T-shaped plan to house both personnel and functional equipment: International Code flags and flames, weather equipment, telegraph, spare halyards and pulleys, ammunition for the canon, and miscellaneous equipment for 20 men in case of mobilization. The watch room, the largest, had five windows overlooking the sea. Two accommodations were provided for the lookout, his assistant and their entire family because the watch had to be kept 24 hours a day and sometimes the wives even participated in the service. The staff also had a cellar and a small vegetable garden. The buildings were covered with a white coating so that the signals from the terrace, seen from the sea, could easily stand out against the lookout post.
The 1914-1918 war showed the danger of submarines. In order to detect them, an acoustic chamber connected to a submerged hydrophone was built.
During the general mobilization of 1939, it was necessary to house under the roofs the 20 reservists who had come to reinforce the lookouts. These sailors slept in hammocks.
In 1940, when the Germans arrived, equipment was hidden among the population of Landunvez so that it would not fall into the hands of the occupier. Germans seized the semaphore and built a blockhouse nearby.
In August 1944, they left the semaphore to flee the Osttruppen (Russian soldiers forcibly recruited among them) who had rebelled. But they took care to blow up all the installations. 3 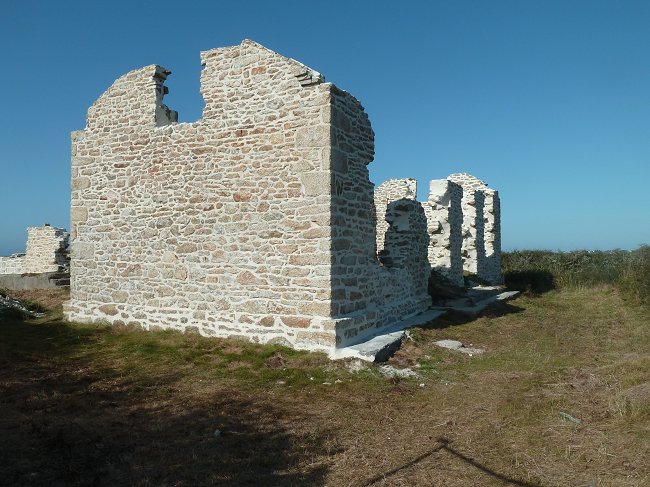 Since then, the semaphore of Kerhoazoc has not been rebuilt, but its ruins have been consolidated. They spread out on a deserted moor at the foot of a large coastal mark which stands alone looking out to sea. A superb tag attracts the eyes. It is the last testimony of the interest that the man had for it. 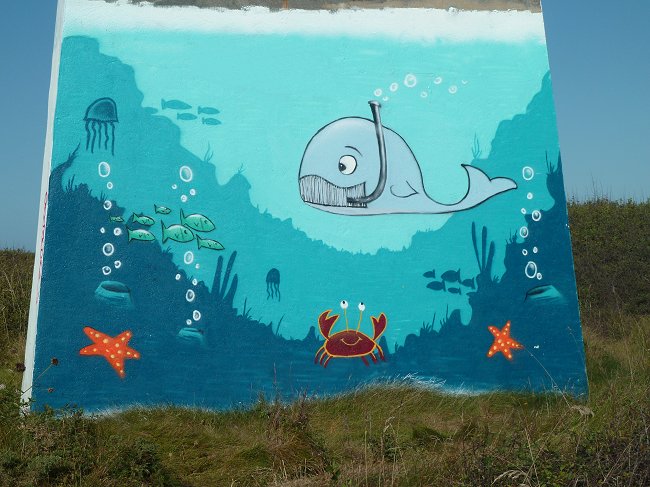 Detection of an enemy submarine
using hydrophones connected to the semaphore


-1- See on a website dedicated to maritime radio the Dupillon page .
-2- See the pictures below :


-3- See the page of this website dedicated to the Maquis of Kergoff :
The Kergoff Maquis 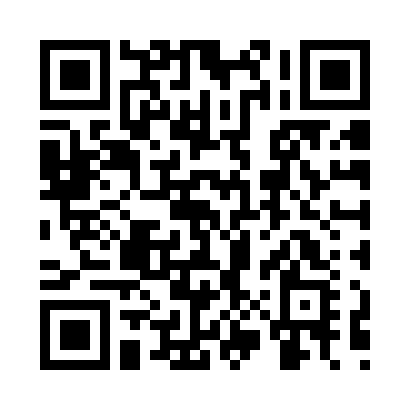