The precious water of Molène 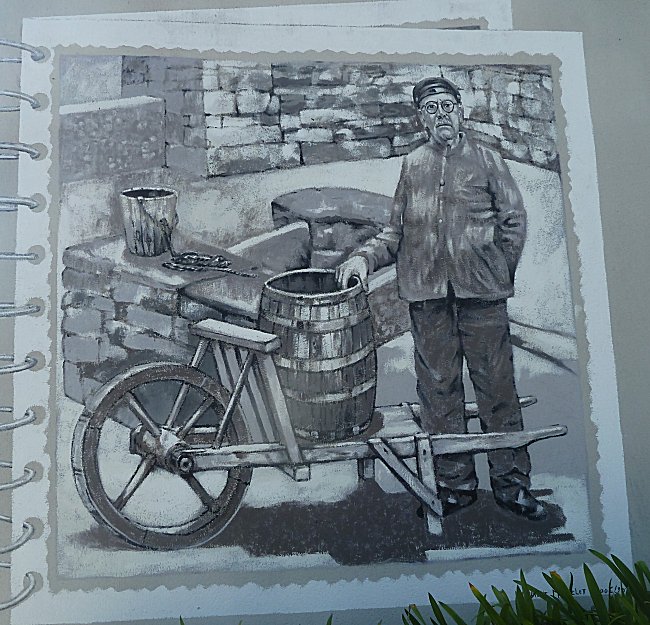 
Molène is a small island of 0.75 km2. A rock located 12 km from the continent, without a permanent hydrographic network, and where, in spite of everything, man has not hesitated to settle. This small island had 151 inhabitants in 2014, a density of 201 inhabitants per square kilometer. For comparison, the average population density of Finistère is 134 inhabitants per km2.
Discovering a territory also means understanding it. The tourist who travels around the island in order to discover the wild coast while enjoying a good bowl of sea air will therefore be able to seek the solutions always developed by Molénais people to obtain drinking water. More or less visible, they appear through installations reminding that in Molène, drinking water has always been a precious heritage. So let us go in search of this water through the ages.

It is a major element of the Molénais heritage. To find it, you have to go west along the harbour to the mural of the lifeboat shelter. Turn right immediately afterwards. The Saint-Ronan well is about 20 metres away. 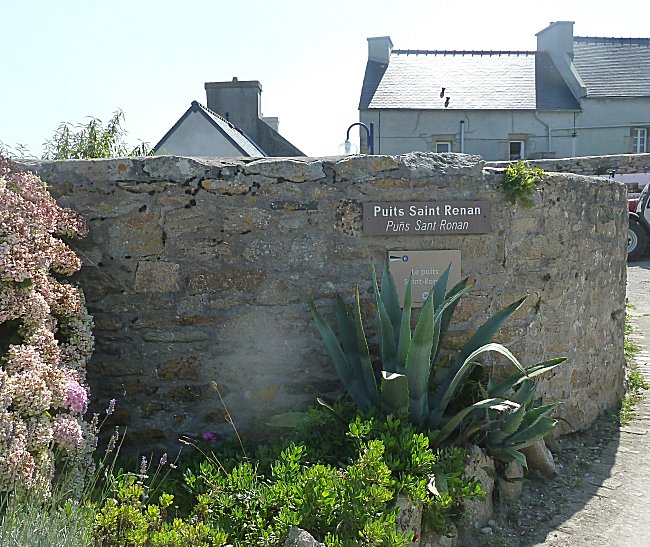 Legend has it that Saint Ronan landed in Molène around the year 520 and found that there was no fresh water on the island. So he made water come out there with his stick. However, there is no source or fountain here, but a majestic public well. 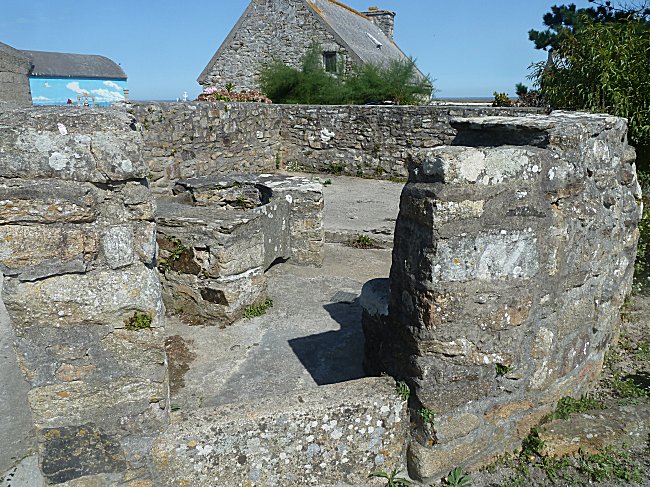 The walker will be able to measure the importance of this collective element, unique for the whole island, by observing how much this historic well is preserved. Masoned and carefully maintained, enthroned sheltered by a real wall of enclosure, it is protected from the arrival of animals by a low erect stone that blocks access. The Saint-Ronan well, as shown by the wall fresco nearby, has long responded to the needs of the population. But during periods of drought, people were forced to consume its slightly brackish water on high tide days. 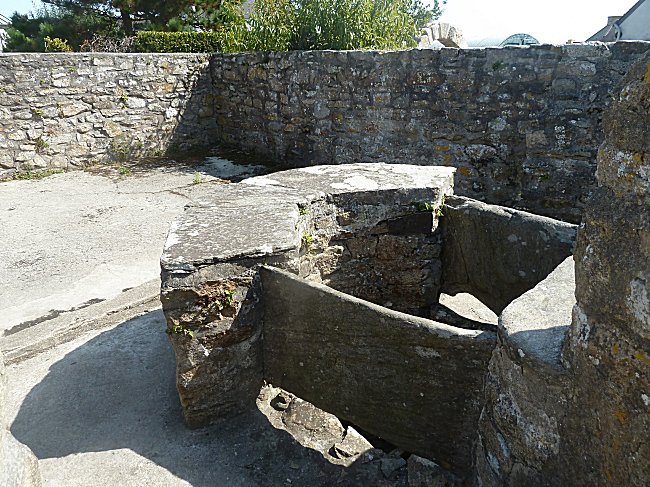 -2- The cistern of the English

After the sinking of the English liner Drummond Castle 1 in 1896, Queen Victoria thanked the inhabitants of the island for their dedication by offering, among other things, collective equipment enabling them to meet their drinking water needs. 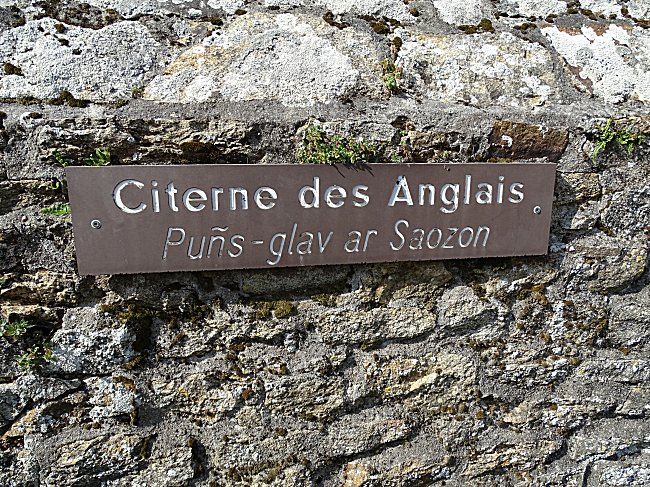 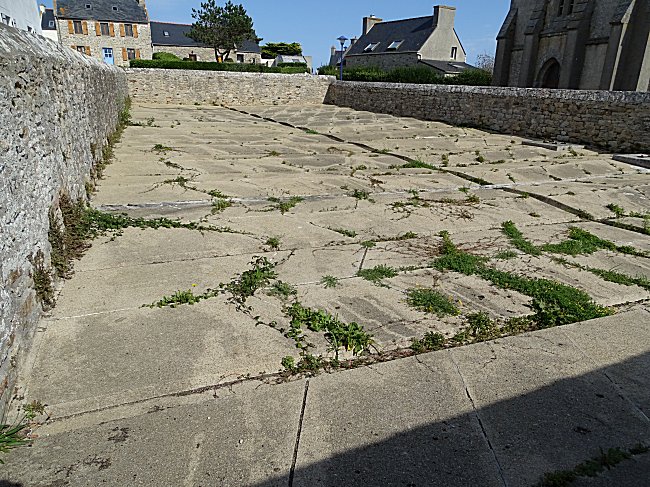 On the model of the facilities of ancient Rome, it is a vast cistern with a capacity of 250 m3, buried in front of the church. It is fed by the impluvium constituted by the 300 m2 of its paved surface, to which were added the 400 m2 of the roofs of the neighboring church and dispensary. . A wall protects this installation and its supervised access is strictly forbidden to the public in order to avoid any water pollution.

While the collective water supply remains visible, the individual supply takes forms that may intrigue visitors. Whatever their route in the streets of Molène, they notice that a quantity of houses are equipped with individual installations of all sizes, obviously intended to collect rainwater in cisterns. 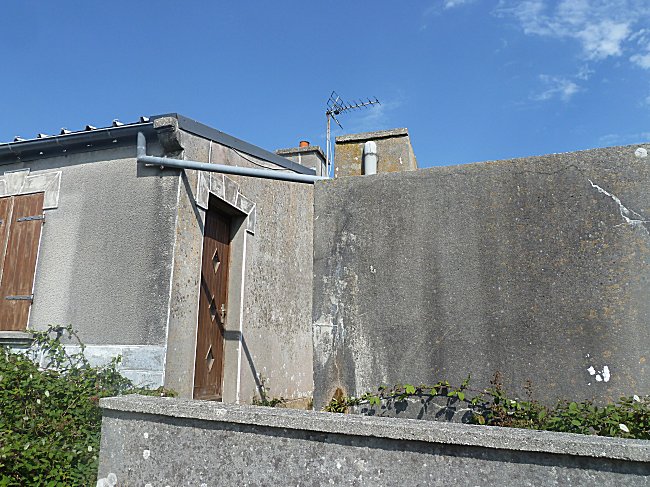 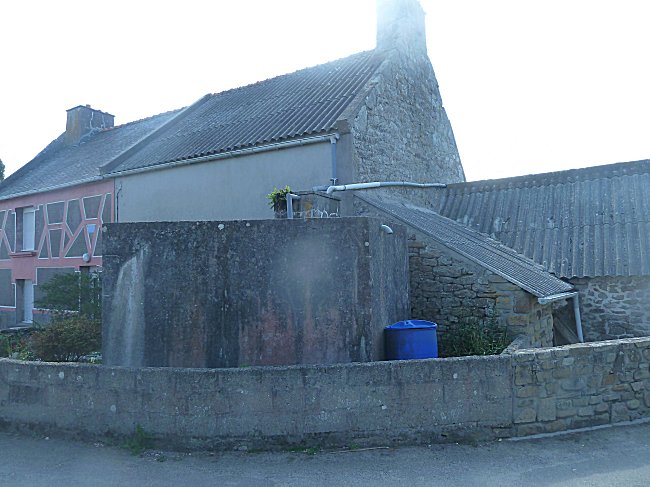 Most often these water tanks are buried, but their presence is betrayed by the supply gutters... 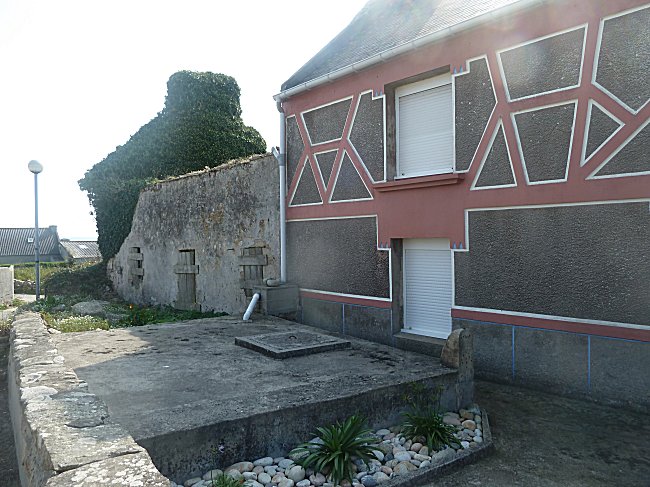 Tanks remaining in the open air are rare. Birds and insects also covet this accessible freshwater resource. It is said that some inhabitants introduced an eel into their open cistern in order to fight mosquito larvae in an ecological way. The story does not say whether the eel was consumed after serving or if it was released into the neighbour's cistern.

There are 226 individual cisterns on the island. This shows their importance. The individual capacity is about 14 m3. So, a total volume of 3164 m3 of rainwater can be stored on the island in this way. In principle, these facilities alone barely cover the needs of the inhabitants. But cisterns do not all have the same capacities and not all families have the same needs. Above all, the rainy regime is by no means guaranteed and tourism has been growing for many decades. As individual solutions were no longer sufficient, it was necessary to imagine additional equipment. 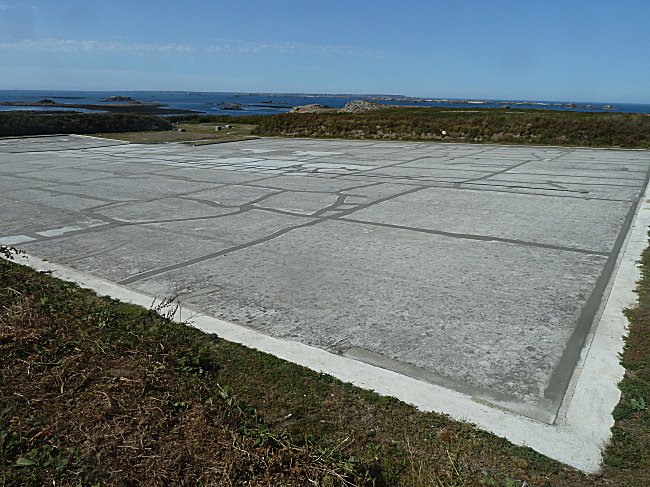 Faced with the increase in water needs due mainly to the development of summer tourism, it was decided in 1977 to provide the island with a new impluvium, much larger than that of the English. The installation, of 4000 m2, is thus implanted in the moor, outside the village. 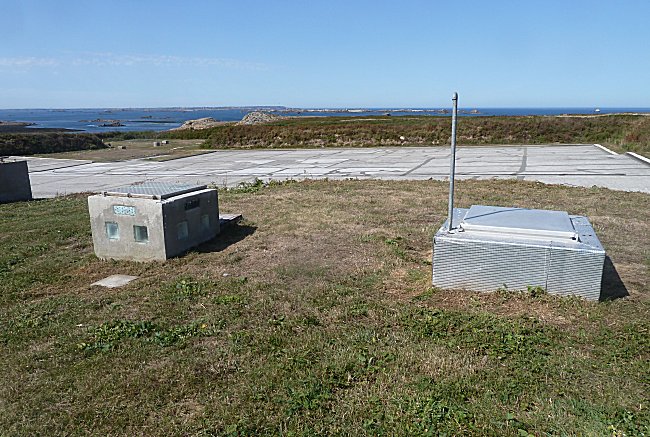 Such equipment of three underground tanks, has a capacity of 1500 m3. Of course, and the visitor will understand easily, its access is also monitored and strictly forbidden to the public for security reasons. We will therefore refrain from entering it.

All these installations, individual and collective, closely dependent on natural rainfall, are subject to climatic hazards. Several times in the summer, the total volume of water collected was insufficient. The department then helped the Molenais by sending them a tanker of the French Navy carrying 200 m3 of drinking water. But this aid was too expensive for the department, so it was no longer free for Molène from 1989.

Faced with this new situation, the municipality decided to make drilling at five points of the island to find water underground. Drilling was carried out in fractured rock down to 90 m depth. Banco! There is fresh water under the feet of Molenais.
But if each drilling has been positive, only three of them have a usable flow. One of them even produces 40 m3 per hour. Drilling is therefore the long-awaited solution to Molenais' number one problem.

Let's talk about quality now. As in all municipalities, the water distributed and managed in Molène by the Local Public Society "Eau du Ponant" is treated and analysed. Groundwater has an acceptable chloride and nitrate content. But it sometimes happens, in summer, that they show traces of undesirable bacteria whose origin is suspected in the infiltration of domestic waste water towards the catchments. Indeed, there is still no water treatment plant on the island. Fortunately, it can be remedied by treating only water for consumption.
However, in the long term, the preservation of such a scarce water resource will undoubtedly impose an indispensable collective sanitation system. Periodically studied, this project remains until now overpriced in view of the proposed solutions. The story of the water on the island is not over ...

Let's end with a little foresight by trying to imagine the future of fresh water for the island...
It is 2030, a beautiful summer day. The evening falls and tourists linger on their terrace while their children take a shower in a well-equipped bathroom. Over the past 10 years, hydroelectric turbines, located in the strongest sea currents around the island, have provided Molène with "green" electrical energy. The use of ultrafiltration for sanitation and reverse osmosis of seawater has become possible. These techniques have evolved because they only need a few watts/m3, which allows a use of water almost "normal", at a reasonable price ...

But let's stop dreaming, we're not there yet. Water is rare and expensive nowadays! Remember to spare this resource on your next visit to Molène.


-1- Visit the Museum of Drummond Castle on the island ( see the page dedicated to it on this site ). 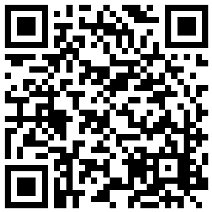