Visits possible for individuals and groups.
For more information, send an e-mail to contact@domainedekeranflech.fr 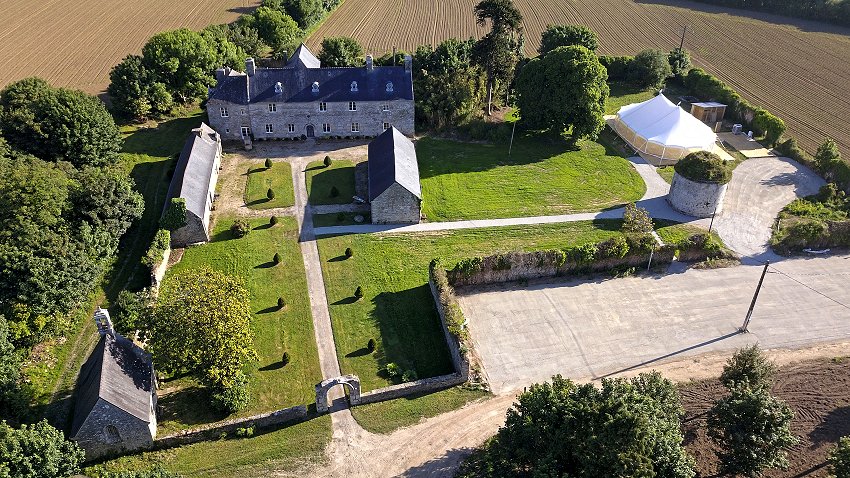 Access :
From St-Renan, take the road to Milizac ( D38 ). At 5 km, turn left in the direction of Lanrivoaré, then left again at 100 m. Follow this small road which leads directly to the entrance of the manor located at 1,4 km. Park in the parking lot, on the right before the porch.

The same family for more than six centuries:

The manor of Keranflec'h is an element of the Leonardo heritage, the oldest parts of which date back to the Middle Ages.
We know from the archives that in 1400 its owner was Merrien or Mériadec de Keranflec'h, lord of Rosneven in Pestivien. At that time the manor was probably smaller than today. Among its successive occupants, let us quote Hervé de Keranflec'h in 1443, Henry in 1481, Morice and his son Jehan in 1503, then Prigent in 1534. In 1561, the only heiress of the domain, Françoise de Keranflec'h married François Le Ny, Lord of Coatélez.
In 1651, by an exchange of possessions, Prigent Le Ny de Coatelez gave the domain of Keranflec'h to his cousin Guillaume III Gilart de Larchantel in St-Pierre-Quilbignon.

The word Ker was traditionally abbreviated to a crossed-out K 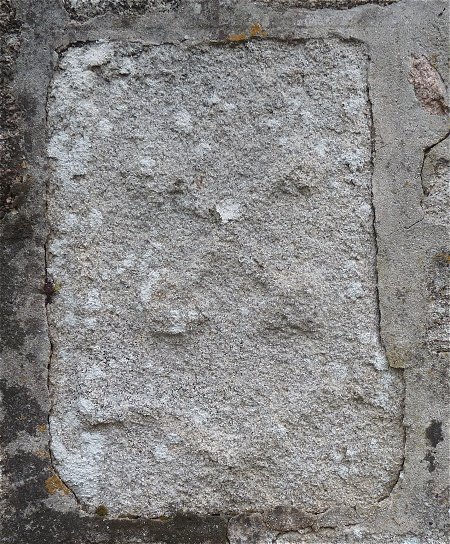 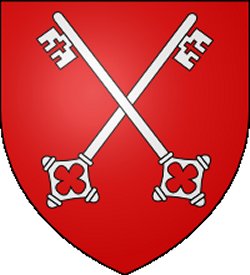 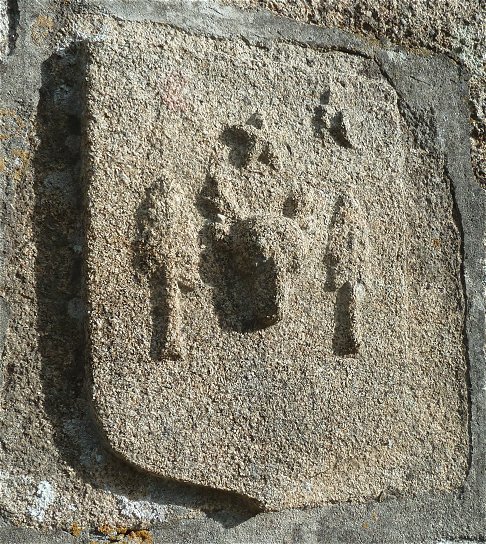 Their grandson Hubert de Poulpiquet de Brescanvel inherited the Keranflec'h estate where he created a deer farm. Hubert de Poulpiquet de Brescanvel was, like his grandfather, mayor of Milizac from 1983 to 2001.
His daughter Véronique, wife of Julien de Lachèze-Murel, is today the owner of the manor of Keranflec'h. A historical house that she transformed into a gîte to welcome guests and also large receptions thanks to a barnum installed near the dovecote. 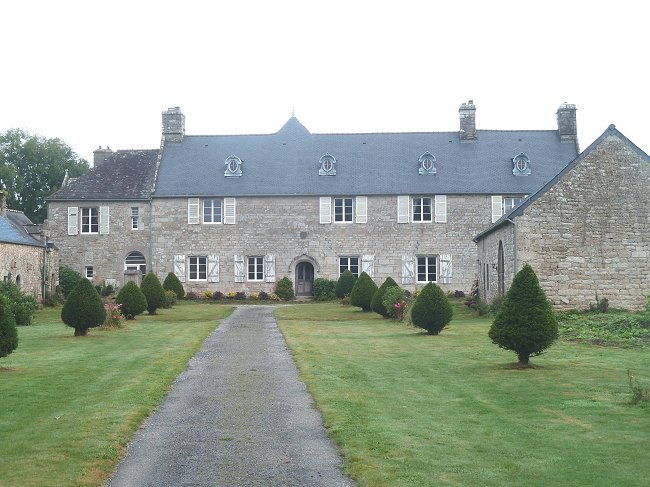 The manor seen from the entrance of the domain.
It is surrounded by two longères which housed on the right a lodging for the male staff as well as a garage for the carriages.
On the left were the stables and a bread oven.
The female staff was housed in the attic of the manor. 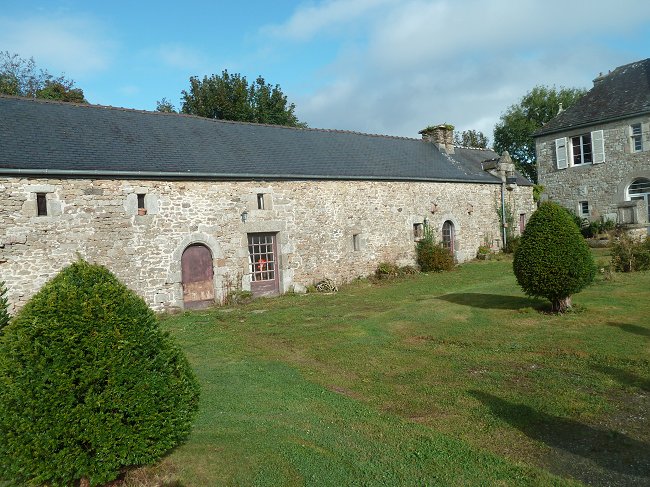 The stables and the bread oven.

Above the entrance door of the manor, a sundial intrigues the visitor. With its hammered coat of arms, it dates from the 18th century. 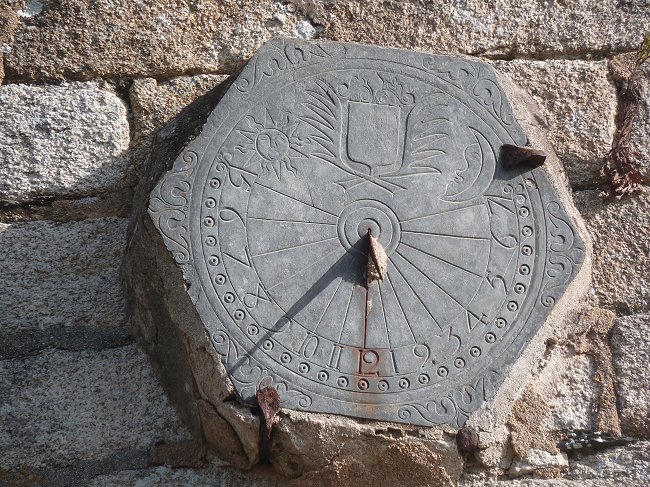 Its only decoration is limited to the humanized figures of the Sun and the Moon framing the coat of arms encircled with palms. It is possible that an in-depth study will reveal the elements it wore.
It is especially noticeable that the dial has been reoriented in order to make it more accurate1.

Detail of the façade of the manor.
© Photo Kerdrone-Julien de Lachèze-Murel

The ornamentation of the entrance door dates from the late 15th or early 16th century. At first glance, the facade of the manor shows a beautiful architectural homogeneity. However, the original construction has undergone many changes over the years. We can see, for example, that the lintels of the two windows above are not identical.

But it is at the back of the building that the successive constructions are evident. 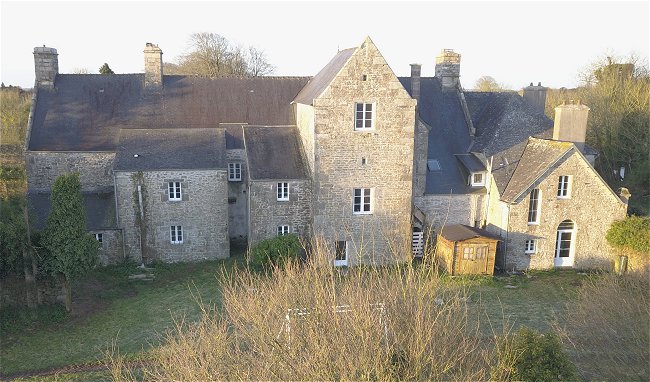 It is assumed that the majestic square tower with a beautiful granite spiral staircase was the first construction that could date from the 15th century. A dungeon around which the house has been gradually expanded by the addition of new buildings. The whole was standardized by the construction of the façade. The latter has even been extended at both ends. 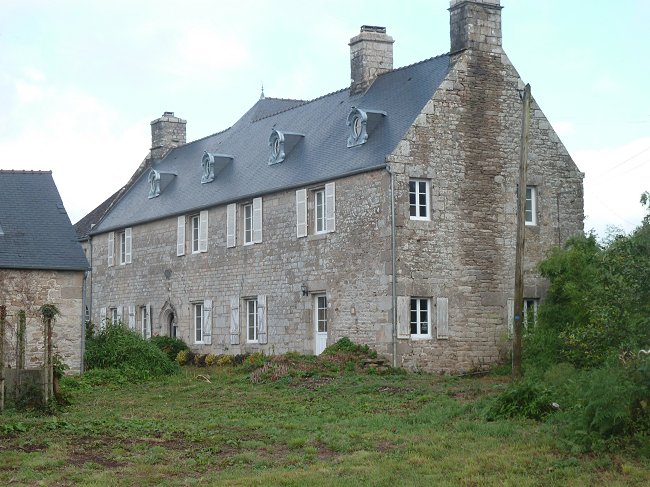 Before this extension, the old gable of the manor house
was located in line with the second chimney.

Inside, the most beautiful rooms are the main hall and the living room. At the back of the large room, an elegant fireplace is located. 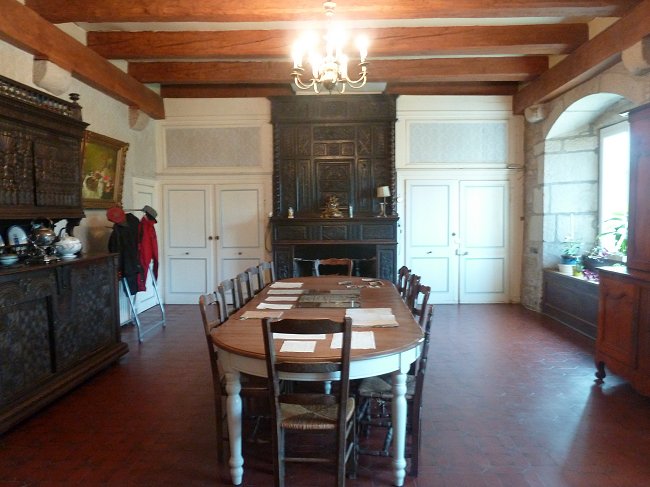 In order to isolate them from possible humidity of the walls, the
beams rest on lateral runners. 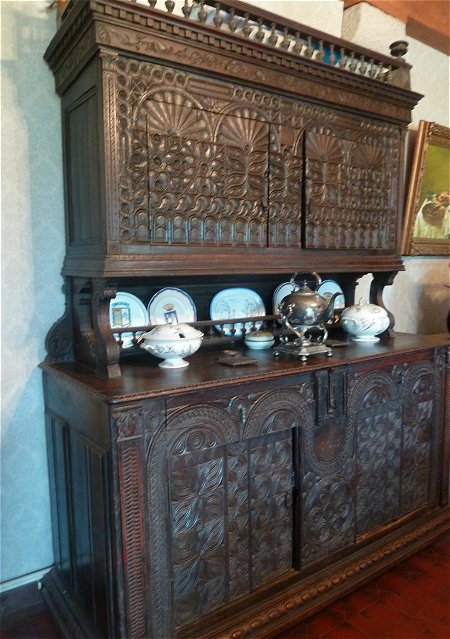 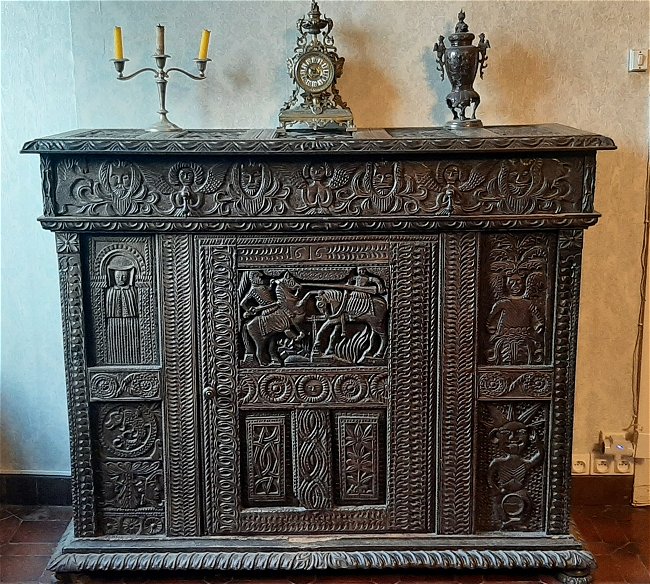 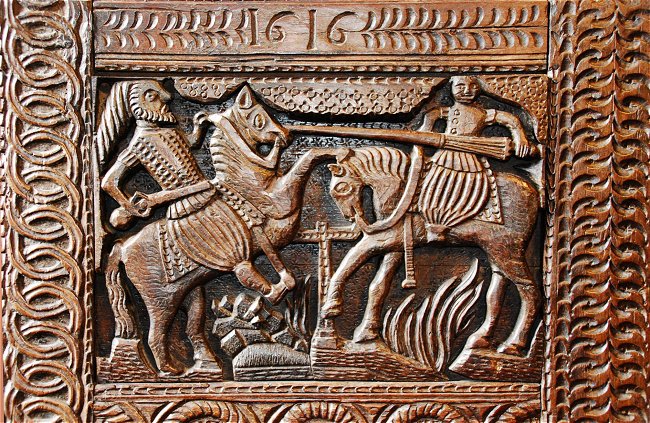 On a background evoking the damage of a holy war
, the knight with the lance disarms the one with a fire arm. 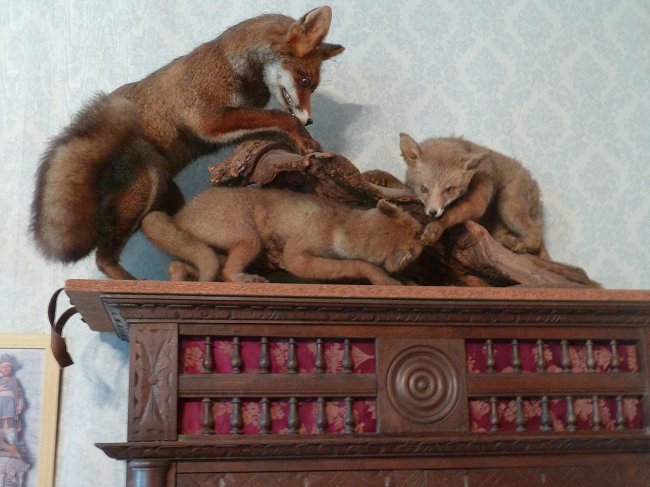 A fox and her cubs, admirably naturalized
, remind us of Hubert de Poulpiquet's past as a hunter. 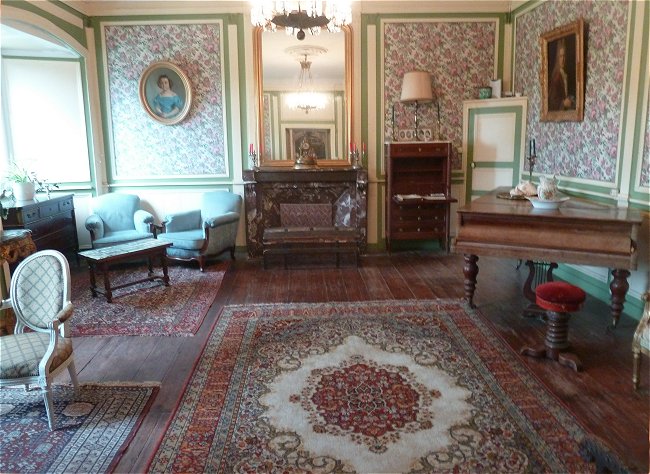 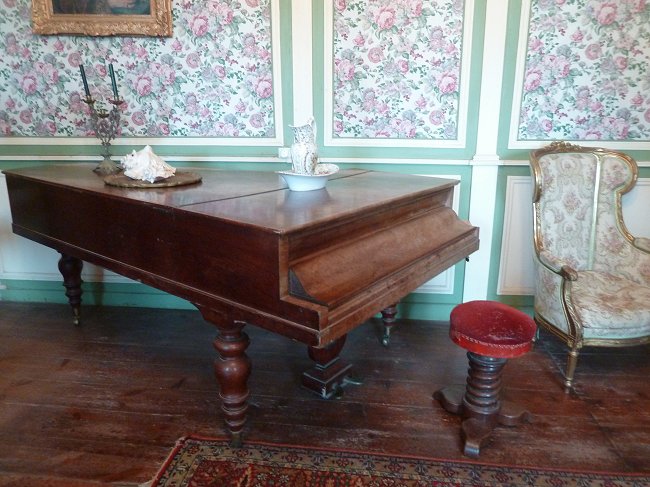 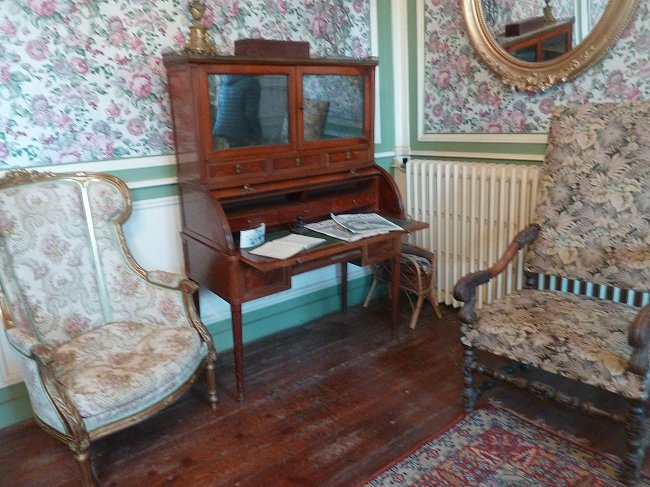 This small secretary with mirrors, secret drawers and cylinder lock
is a typical 19th century happiness of the day. 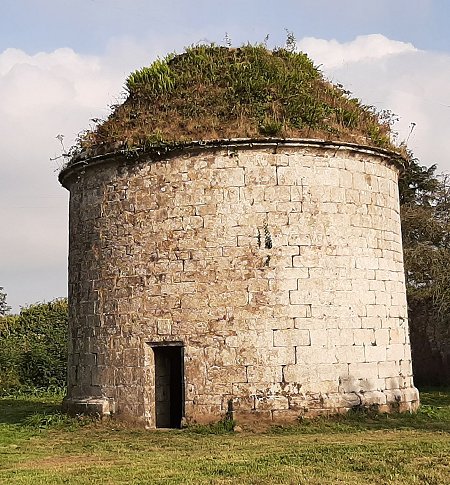 Very close to the manor, the dovecote is still in excellent condition. Its coat of arms, very eroded, could be that of the Le Ny family. Inside, the 800 bolts show the extent of the domain at that time2. 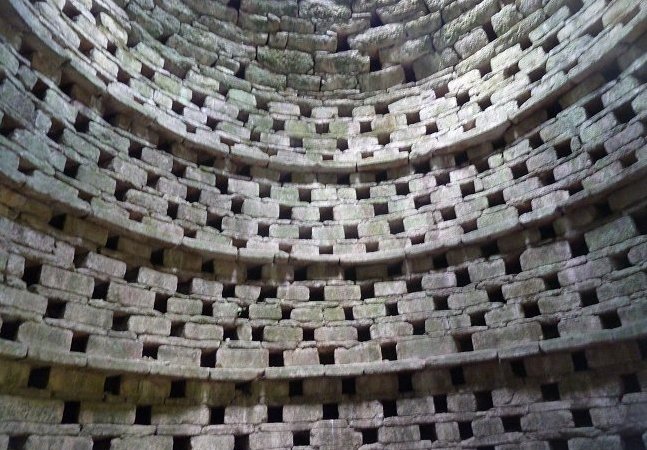 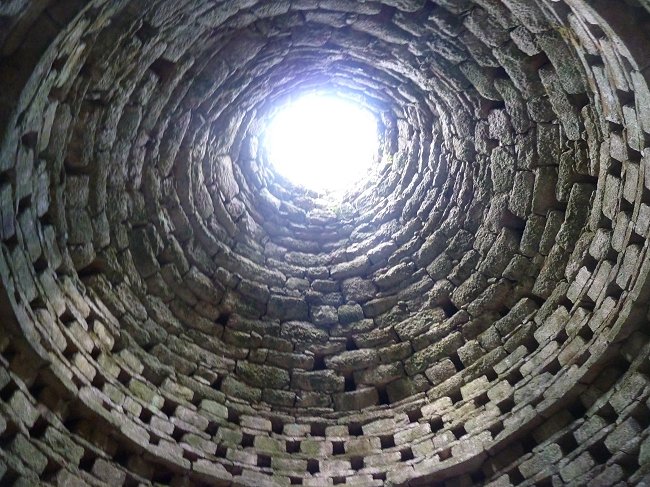 Note the extraordinary arrangement of the corbelled stones forming the dome of the building. Supported by the edges of the opening at the top, a central mast equipped with a mobile gallows was fixed on a circular base. 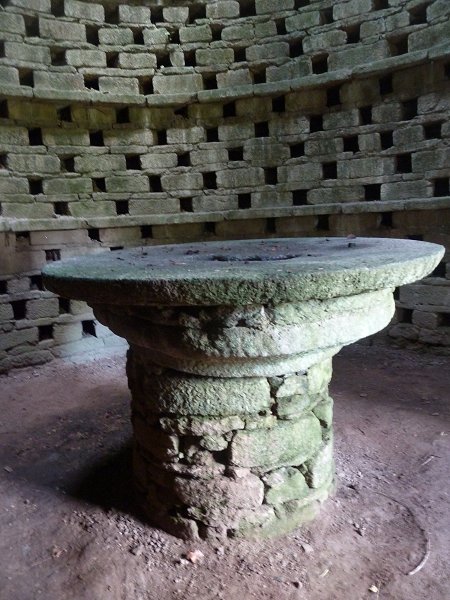 The ladder leaning on the gallows allowed to visit easily all the nests and to seize at will eggs and pigeons to consume them. All this ingenious wooden rotating equipment has of course disappeared today. 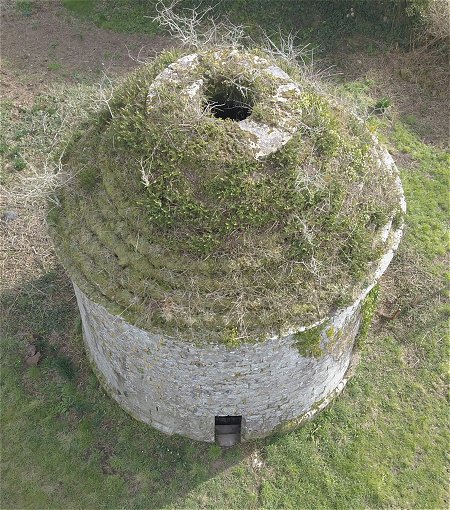 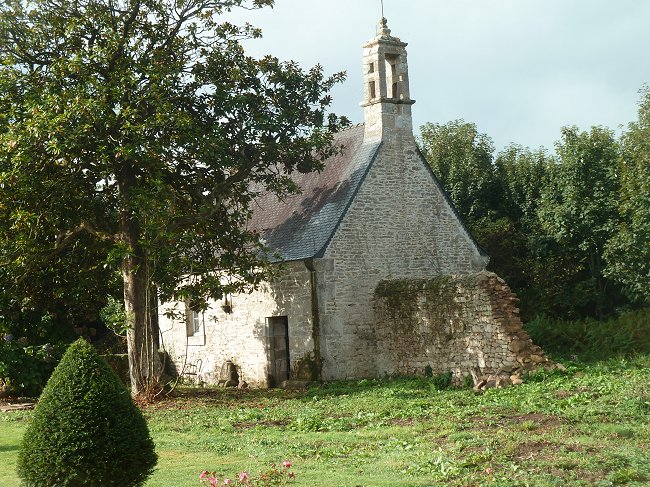 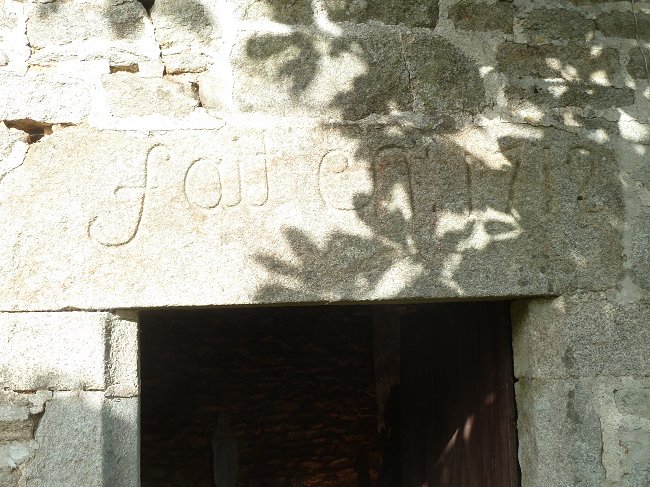 Nestled in a shaded area, the chapel appears to be in good condition on the outside. Above the door is the year of its construction by Vincent-Pierre Gilart de Keranflec'h. However, more than three centuries have passed and the interior, once entirely panelled, is awaiting a new phase of work. 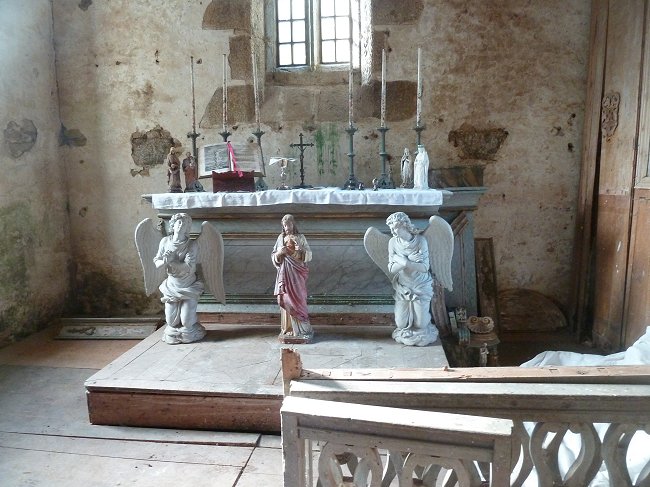 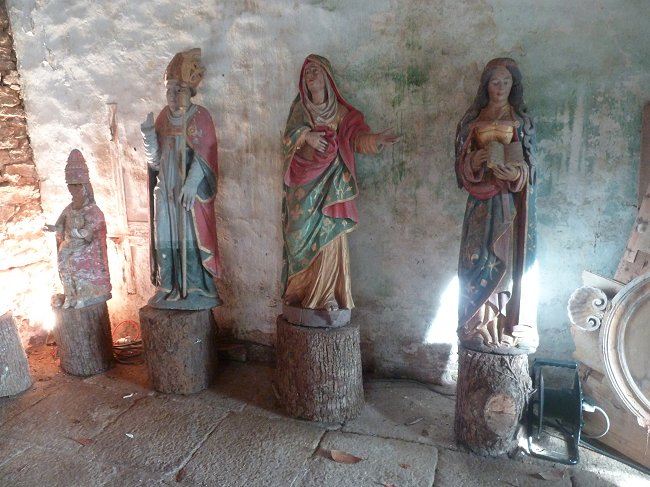 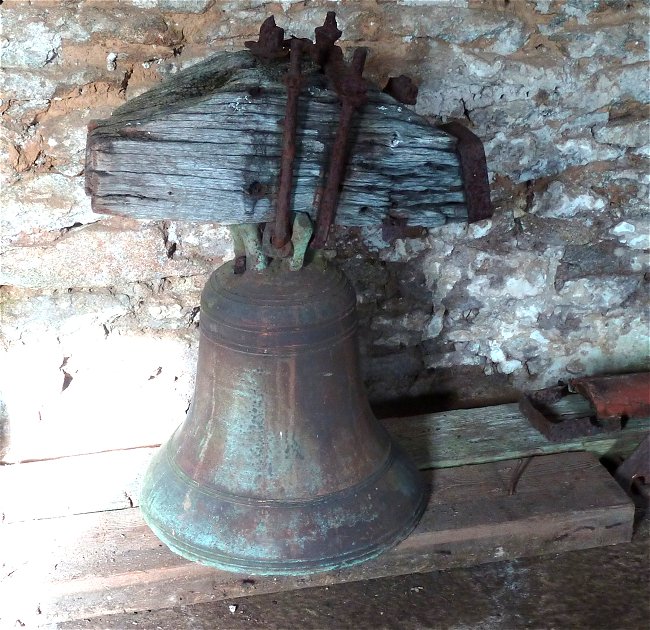 We cannot leave the estate without thinking about the important maintenance and renovation work that the owners have imposed on themselves in order to preserve this beautiful heritage for future generations.

But visitors and Internet users can join in by becoming active members or benefactors of the newly created association Les Compagnons de Keranflec'h. 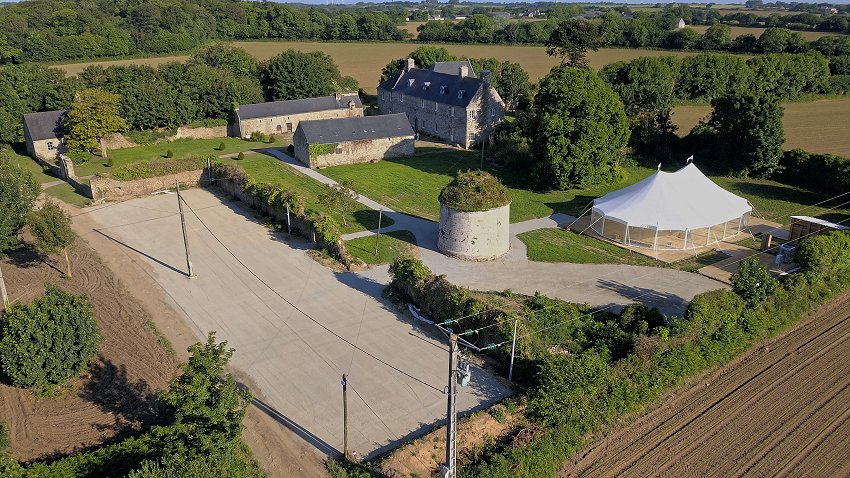 
1- Read on our page Sundials more details on how to read a sundial.

2- The bolts are the holes in the interior wall giving access to the pigeons' nests. Their number was a function of the surface, in acres, of the domain. See our page on the Lanhalla Dovecote. 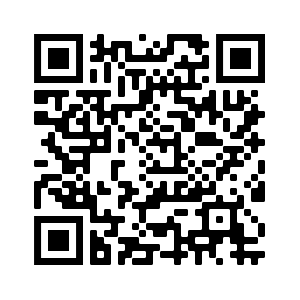