The search for tin in St-Renan

Access: Take the Rue du Pont-de-Bois to the west in the direction of Brélès and park 30m after the roundabout on the car park located in front of Thomas Furniture. Behind this store begins the footpath that runs around the lake. You have to go down this path and just after the bridge go down to the right into the exhibition space called the Blue Prairie. 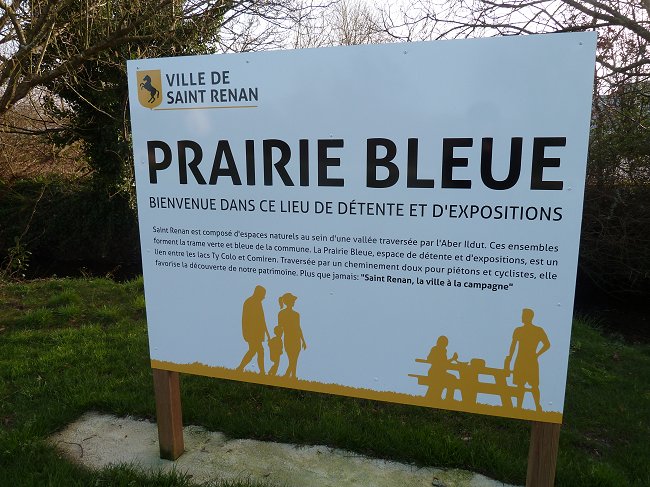 The town hall of St-Renan has installed a string of explanatory panels developed by the Ponant Museum in St. Renan. We learn how a historic mining extraction took place that gave birth to five lakes and profoundly transformed the landscape of the commune. 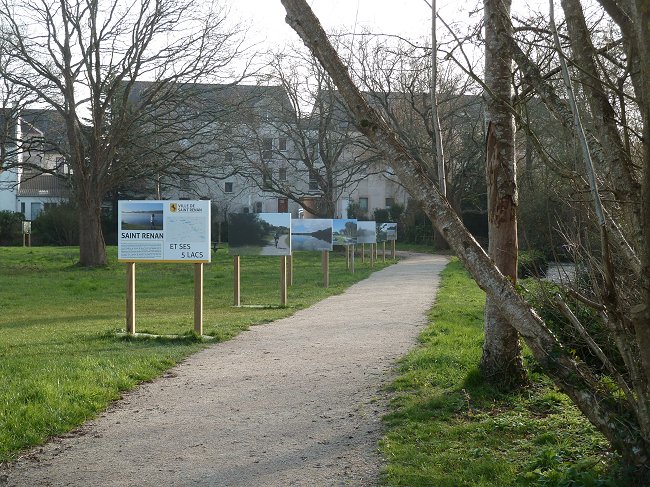 The Aber Ildut river, which flows near these panels, was not always the modest brook that feeds the St-Renan lakes today. In the tertiary era, it was an impetuous coastal river that received the rivers Aulne, Elorn and Penfeld, digging a deep bed all along its course. Over the next millions of years, blocked not far from here by a hight bottom from the valley, alluvials from the degradation of the staniferous granite of the Arrée Mountains and Black Mountains were deposited. 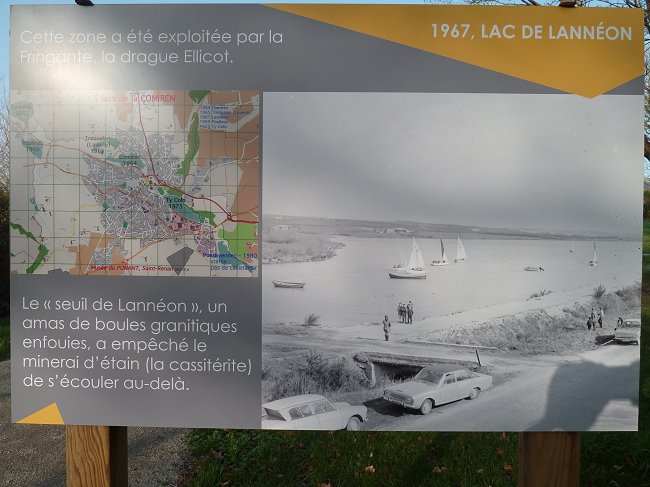 With the rise of the sea level, the vast expanse that now constitutes the Brest roadstead opened to the sea, diverting the three rivers that formed mainly the Aber Ildut. The mighty river then became a modest brook winding here in a vast area of swamps.
In ancient times, as early as 1500 BC, alluvials were exploited for their content in cassiterite, the tin ore essential for the manufacture of bronze. The export of this ore to Mediterranean ports has resulted in significant trade. This exploitation lasted until the end of the Roman Empire. 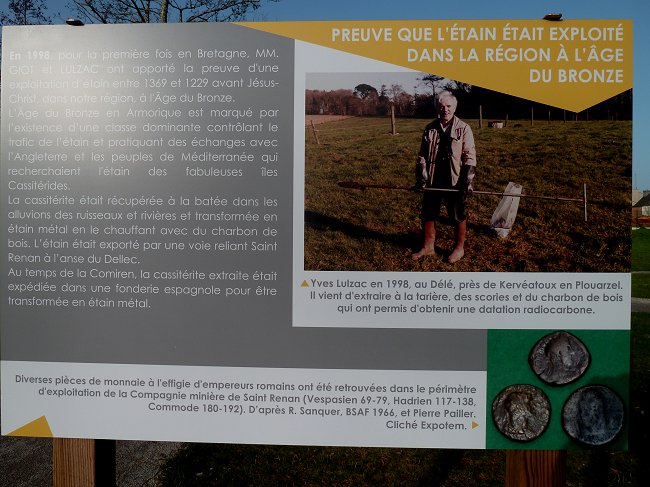 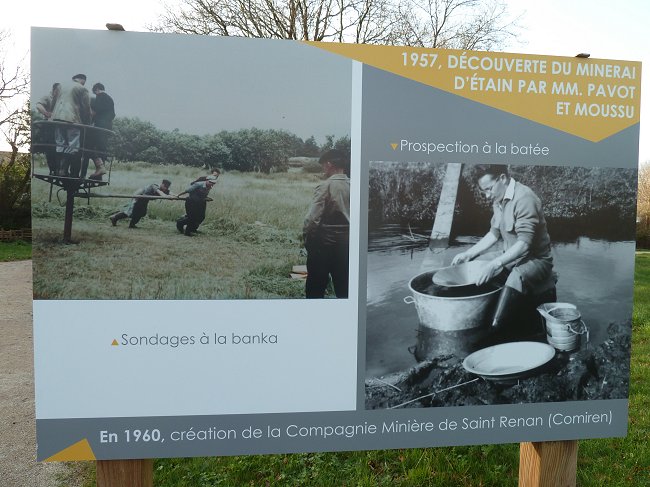 In 1957, in search of uranium ore, the industrialist Charles Pavot rediscovered the wealth of tin ore in these swampy alluvium. St-Renan's cassiterite was 75% pure. He then created the company COMIREN (COmpagnie MInière de Saint-RENan) and obtained permission to open a mining operation. From 1960 to 1975 the bottom of the Aber Ildut swamps was dredged to a thickness of about ten metres, making St-Renan the European tin capital. 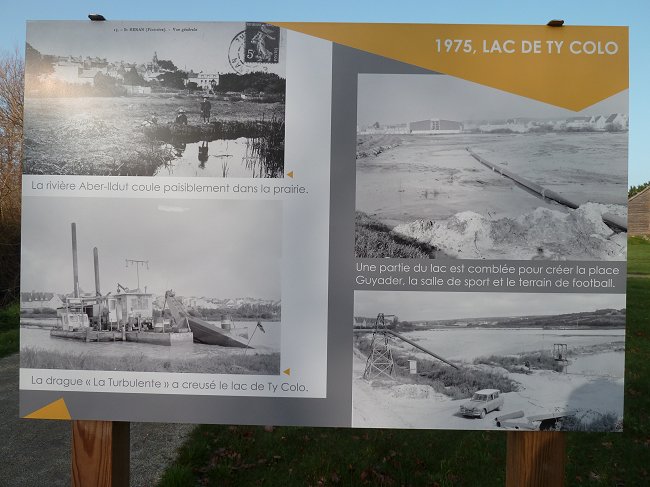 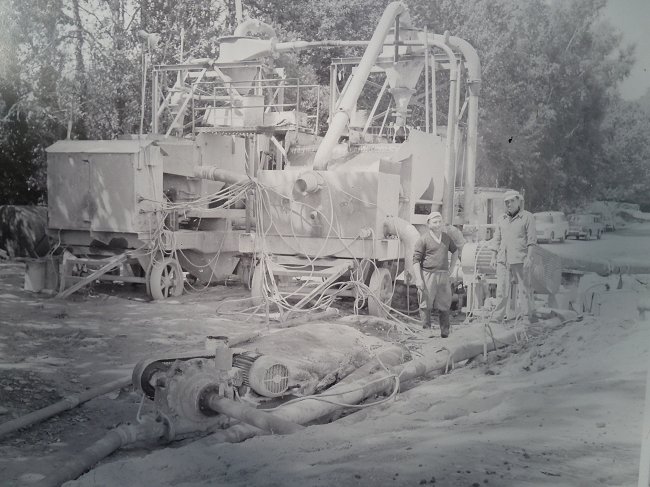 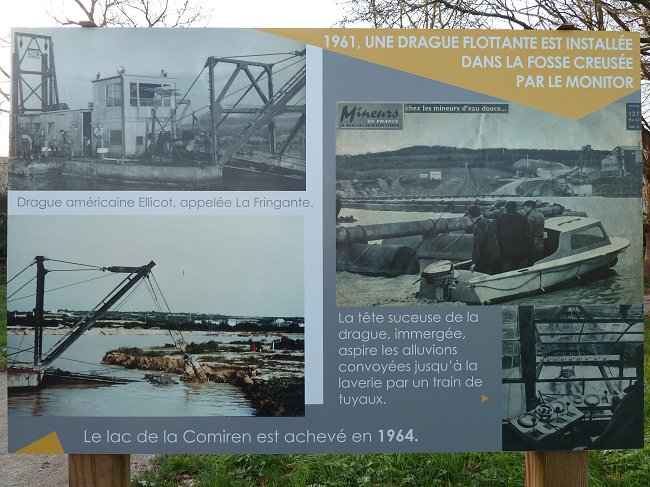 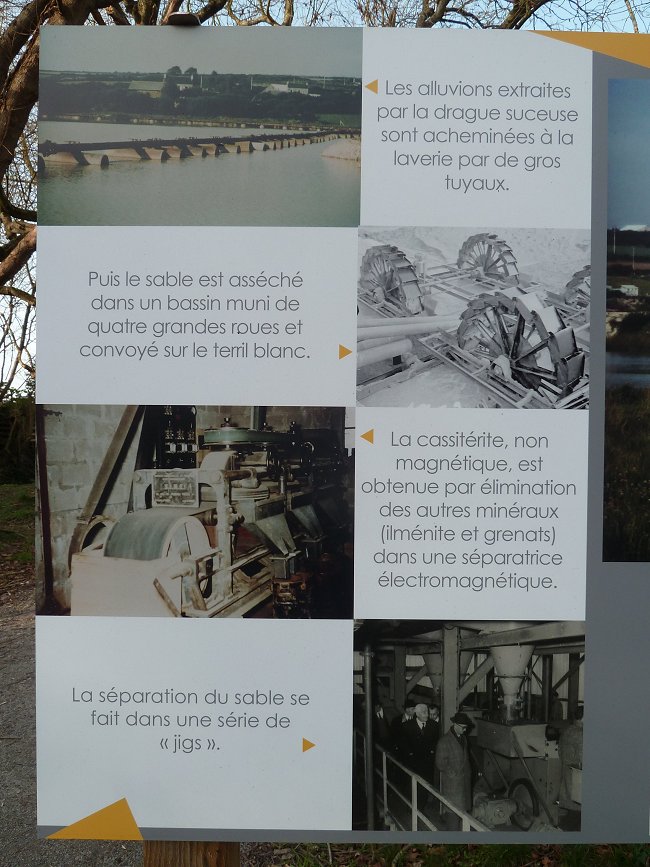 The resulting cassiterite came in the form of black aggregates that had to be melted to obtain tin ingots. No smelters in France was specialized in this process, and the ore had to be sent to Spain to obtain the metal.

In a room of the Ponant Museum where a sample of cassiterite is on display, a film explains to visitors how the work of COMIREN took place. This unique document, commented by Charles Pavot himself, is also a real museum piece. 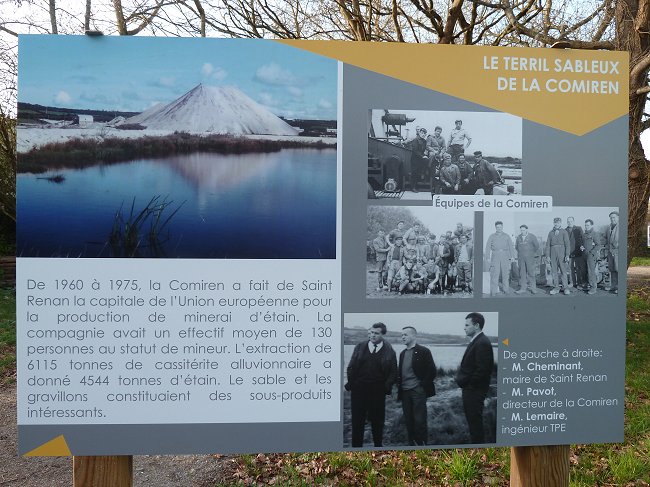 Charles Pavot is at the center of the trio that appears at the bottom, right on this panel1.

The excavation of the marshlands had the effect of drying up the lands, and in the depths of the depressions the Aber Ildut river formed five important lakes. The whole landscape was turned upside down. From then on, the municipality had to take advantage of it. The drained lands were quickly equipped with collective equipments and commercial areas. The lakes closest to the city centre became surrounded with paths and became one a recreational body of water, the other a place to discovery nature and walks. 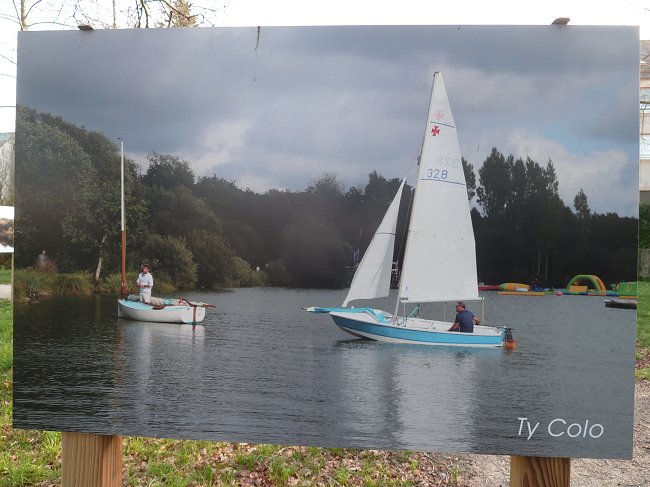 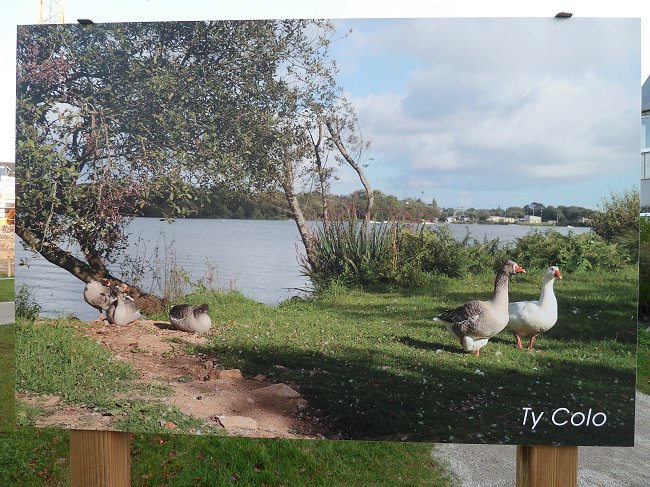 This is an example of a successful landscape transformation that has given the city a real attractive advantage at the origin of its recent development. 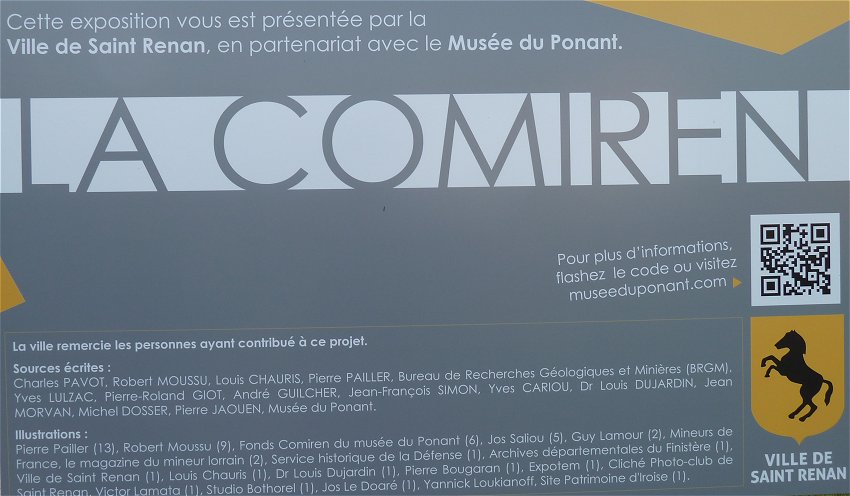 -1- Charles Pavot (1920 - 2009) began a career in the National Navy in 1940, but he had to interrupt it for health reasons. In 1948, on the death of his father, he succeeded him for ten years at the head of the iodine factories of Le Conquet, Argenton and Plouguerneau. Very active, he did not limit his interest to the extraction of iodine and tin alone. The sands and gravels were also important productions for him. After his mining activities, he turned to port works in La Trinité-sur-mer and the South, then commercial operations in Equatorial Africa.
Initially a city councillor, he became mayor of Landunvez from 1959 to 1971, where he was credited with opening the beautiful coastal road between Argenton and Kersaint. Then, he was mayor of Porspoder from 1977 to 1995.
He remained honorary mayor and published his memoirs in 2008 under the title "Episodes of an Ordinary Life" at Ecrima Editions.

This book is available
Ponant Museum in St. Renan.