The menhirs and the engraved slab of St-Denec 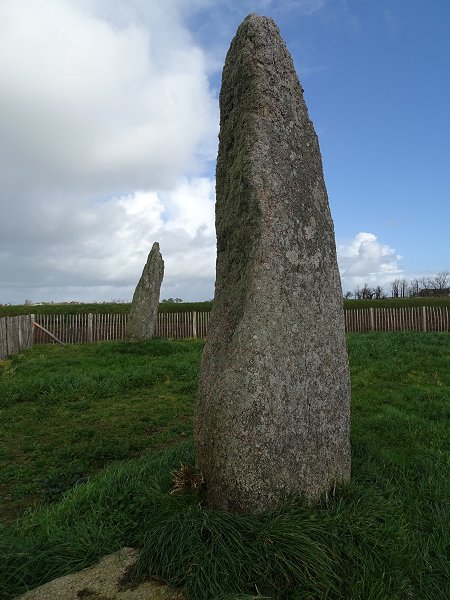 The engraved slab is the one on the ground 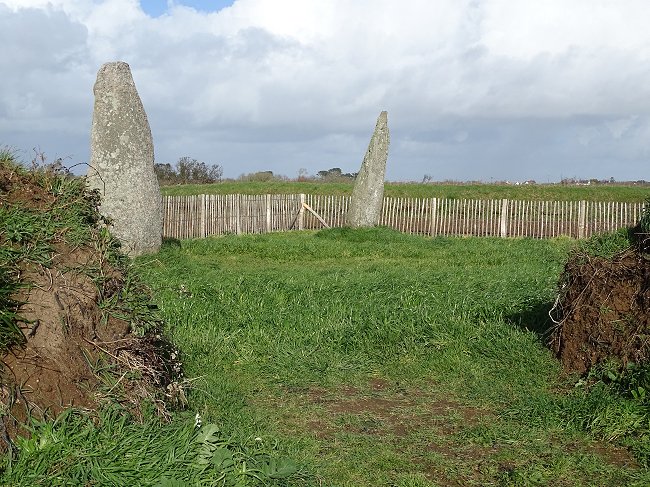 The menhir on the right is 4.12 m high and 1.48 m wide, with a thickness of nearly 1 m at the base. The stone, cut in porphyroid granite from the Aber Ildut, has been carefully bush-hammered all over its southern side. It's broken at the top. 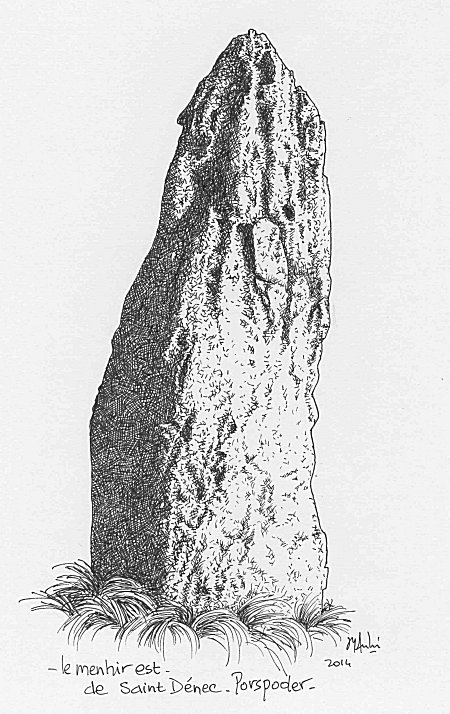 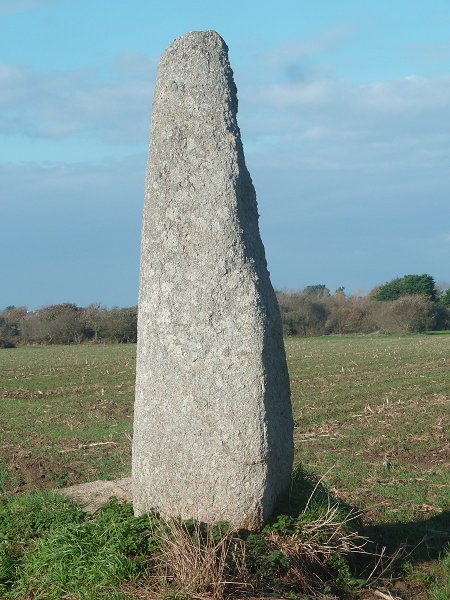 At the foot of this menhir, a slab 2.85 m long and 0.85 m wide is lying on the ground. One can discern engravings that intrigue the visitor. 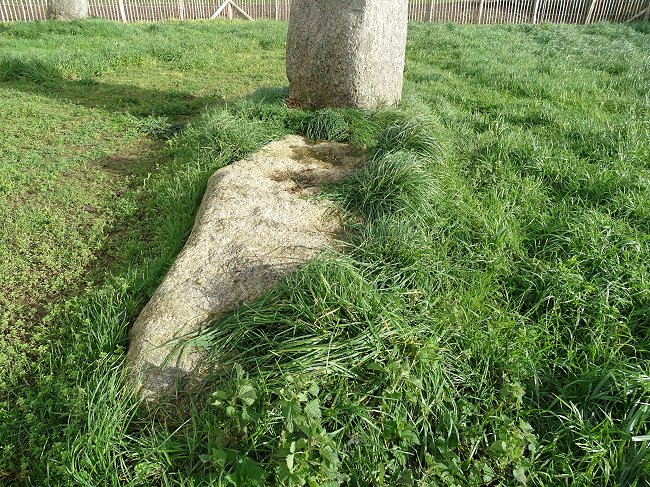 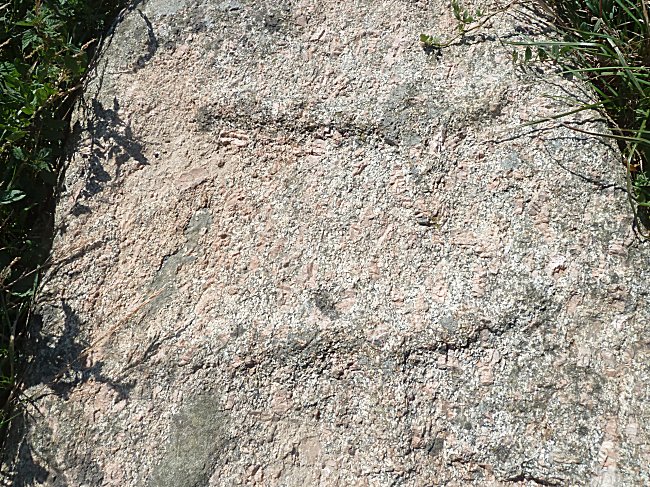 Both hatchets are embossed.
It was therefore necessary to strip the entire surface of the slab with stone or bronze tools, depending on the period, to create these engravings. 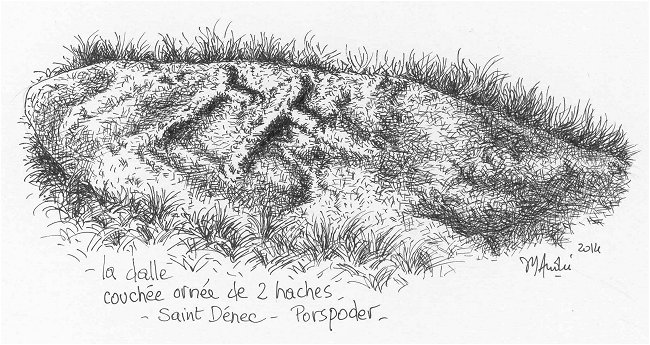 Drawing by Jean-Yves André© A good drawing is often more telling than a photo.

Two hatchets are recognizable, as they also exist on other megalithic monuments. 1
Their sleeves, roughly parallel, are about fifty centimeters long. Both cutting edges face east. Some archaeologists have suggested that this large slab could have been a knocked down menhir. But besides the fact that it is located too close to the second menhir, this position would make the axes horizontal which is illogical for such a tool. It is therefore likely that the engraved slab has always been in its present position and its true meaning is unknown.

In 2021, in order to preserve it from agricultural machines, the municipality of Porspoder signed an emphyteutic lease with the owner of the field, which today makes the menhirs and the engraved stone accessible to the public inside an enclosure.
It is now up to the visitors to take great care of the engravings in order not to damage them.

We know that another slab also existed in the past, until the 1930s, at the foot of the first menhir. It was destroyed by the owner of the time because it hindered in his works, and that a dozen years hardly after the classification of the megaliths of St-Denec as Historic Monuments...
In terms of heritage, any deterioration is irreversible. 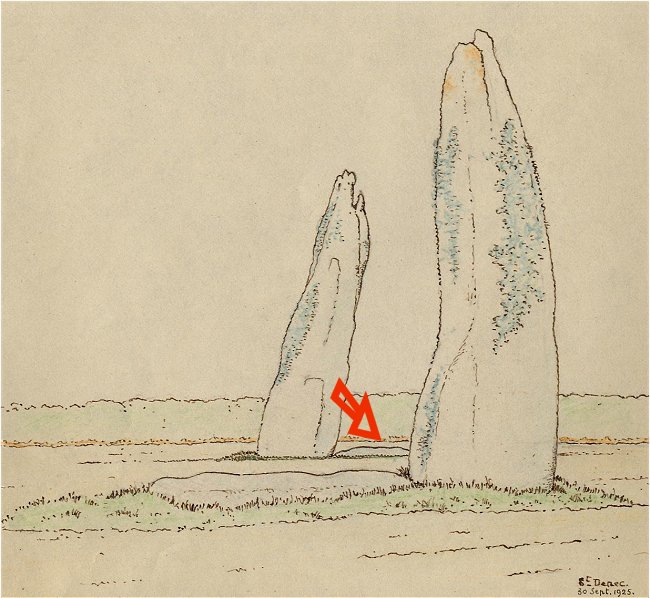 At the foot of the North-East menhir, one can see the destroyed slab
on this drawing by Etienne Morel dated 1925©

-1- Another engraved slab was discovered at Le Conquet, in 1916, on the Kermorvan peninsula. See on this website the photo at the very bottom of the page on The last menhirs of Kermorvan . 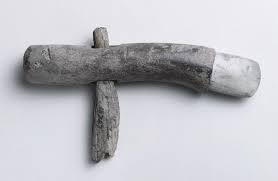 The hatchet of the Musée Boucher de Perthes in Abbeville, in the Somme.
The polished blade is stuck in a deer antler sheath, which is drilled to attach a long wooden handle, here broken. This universal tool could be used for clearing, as well as cutting stems during harvesting or making furrows. It constitutes an improvement compared to a direct pressing of the axe in the slot of a stick as shown by the engraving on the slab of St-Denec. 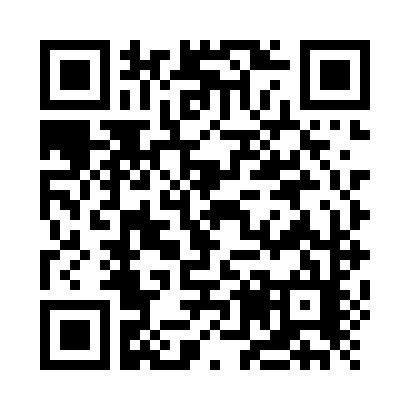