The megaliths of Melon Island

Access :    Coming from St-Renan by the exit to Ploudalmézeau, always go straight towards the small port of Argenton and turn left when you arrive in front of the sea. After crossing the village of Porspoder, you will drive 6 km along the harbour of Melon. Parking on the right in front of the restaurant "Le Chenal".
You are then on a small peninsula. Walk to the end of it. Melon Island is opposite, separated from the mainland by a narrow channel.
Important :   Access is only possible on foot at low tide . Do not linger on the island and constantly monitor the rising tide. Do not cross the channel when the water level is likely to exceed knee height. The current is so violent that accidents, even drownings are to be feared. If you are caught in the island by the tide, call for help rather than attempt a risky crossing.
Tide times today, click on the following link : SHOM 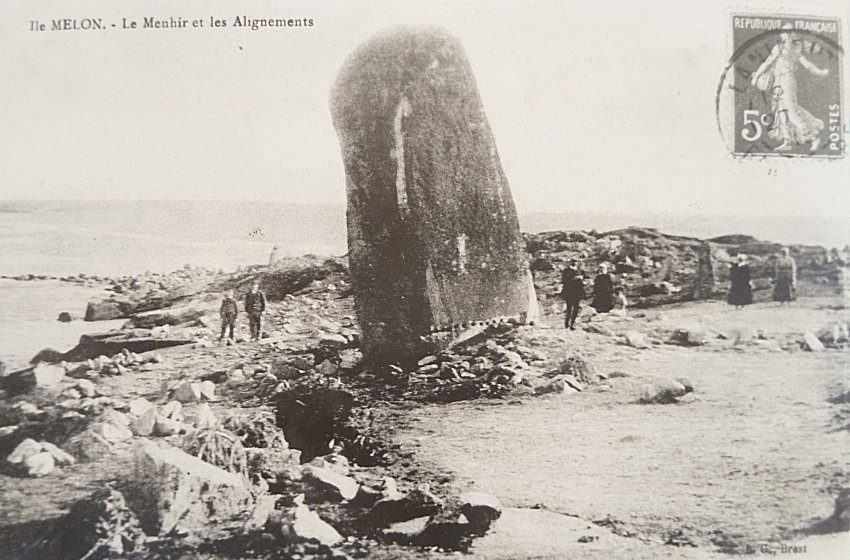 If the commune of Porspoder is indeed the richest in megaliths of all the Country of Iroise, it is on this little island that they are still, in spite of destructions, the most numerous. 1   We counted no less than 4 menhirs, 1 tumulus, 2 cairns and 5 dolmens on this small space. The highest menhir, which reached about 7 m, was dynamited by the Germans in 1942. Erosion has taken off ground another stone 2.40 m long. The dolmens have been more or less destroyed, the tumulus and the two cairns are completely in ruins today. All the more reason to preserve the few megaliths that still remain. 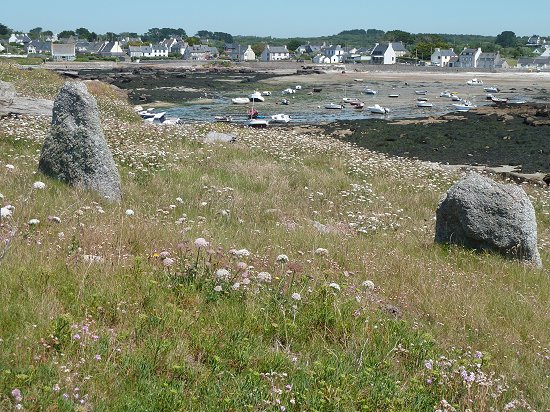 These two menhirs, which enjoy an unobstructed view of the sea, are only 5 m apart. Placed on an NNE/SSO alignment, both were cut from Aber Ildut granite. Their north side is covered with lichen. The cavities found there seem quite recent. In this deserted and isolated islet, would the two monuments have been used as targets by a sniper whose small grey cells would have remained in the Stone Age ? 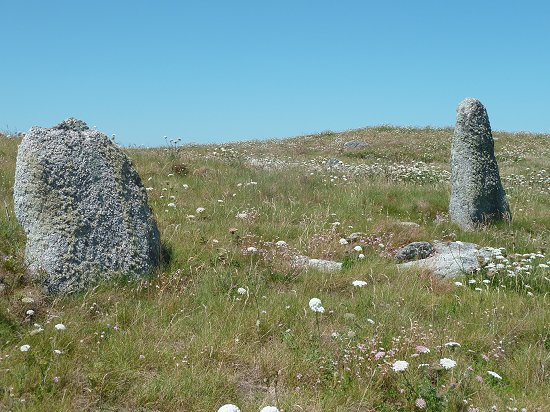 The largest menhir is also the lowest on the slope. Trapezoidal in shape, it reaches 1.90 m in height and width for a thickness of 50 cm. The other, oblong, is 1.20 m high with a width of 1.15 m at the base and a maximum thickness of 55 cm. 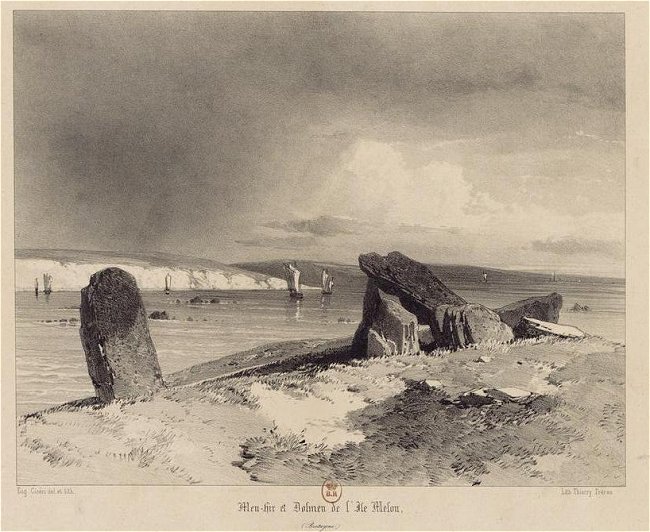 Drawing by Eugène Cicéri in 1846 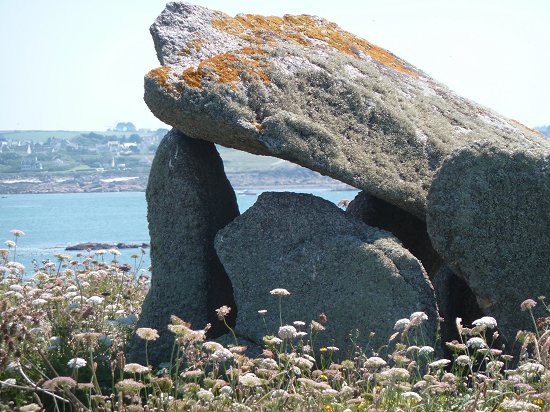 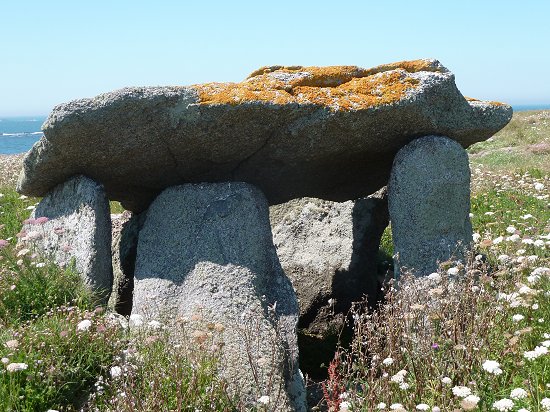 You're not used to see a dolmen proudly wearing his hat crooked !
The collapse of the roof slab is due to the very old subsidence of several pillars that supported it. You have to step back to notice that this corridor dolmen was part of a cairn that was destroyed by military developments (compare plans below).
The corridor, lined with 1.50 m high, 3 m long and 80 cm wide stones, was partially destroyed during the Second World War when a casemate was built. It leads to a trapezoid-shaped room whose pillars are much higher than those of the corridor and reach 2.20 m to 2.60 m.
All the stones are granite from the Aber Ildut. 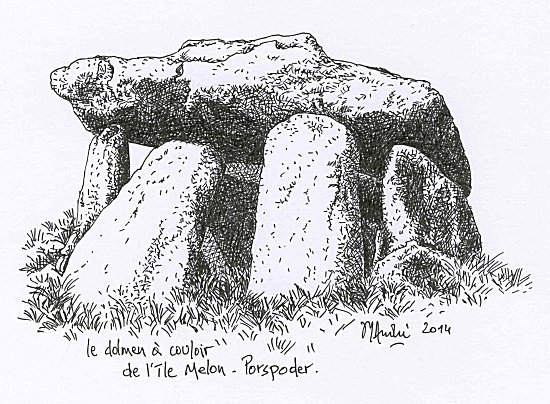 The terminal room is 1.20 m to 1.80 m wide and 2.80 m long. Today, three pillars support the only large roof slab whose dimensions reach 3.20 m by 2.20 m.
An excavation carried out in 1883 by Abbé Abgrall inside the monument delivered a ceramic smoother and a flint dagger. 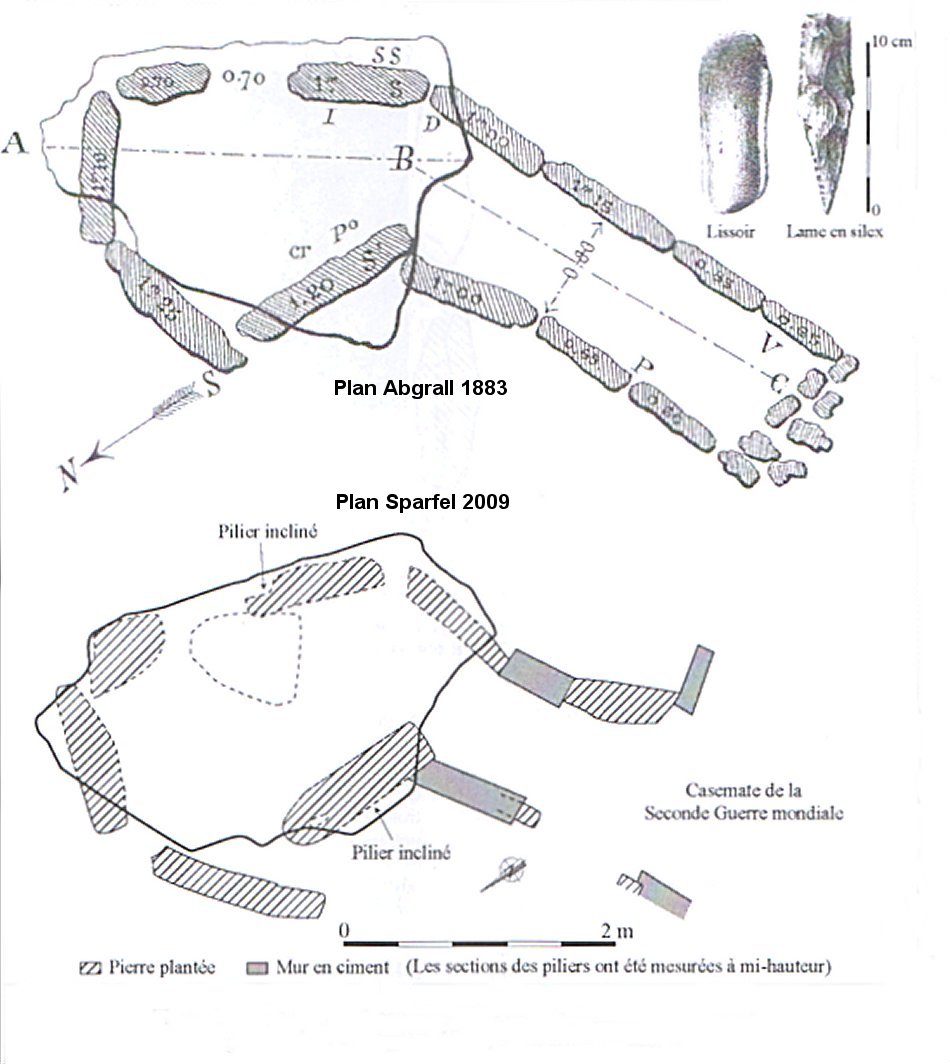 Plans taken from Yohann Sparfel and Yvan Pailler :
"Megaliths of the Brest district" . 2009

Two other structures are still visible. The first one barely emerges from the ground. Five pillars seem to delimit a terminal chamber about 1.60 m long. The stones in the corridor are gone. 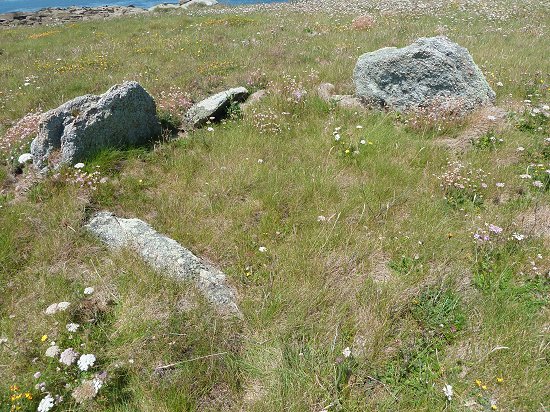 Not far from there, three pillars seem to delimit the room of another Neolithic burial with a slab lying. Its length measures approximately 2.30 m. 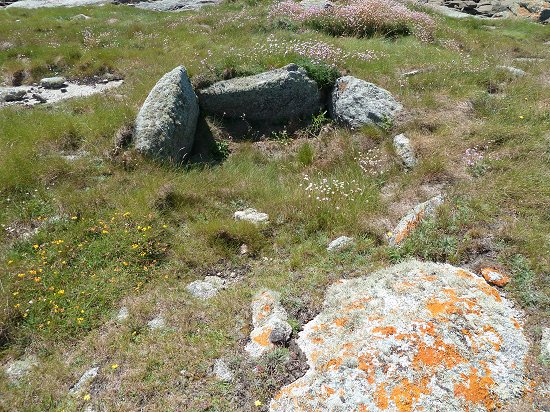 The rooms of these two structures, which have between them the same NNE/SSO orientation are open to the East.

All these megalithic monuments concentrated on such a small territory indicate that this exceptional island, which at the time was only a meagre peninsula, had a sacred nature for the Neolithic population who erected them. In this respect, and despite all the destructions that has disfigured its monuments, Melon Island deserves a more in-depth study by our archaeologists. 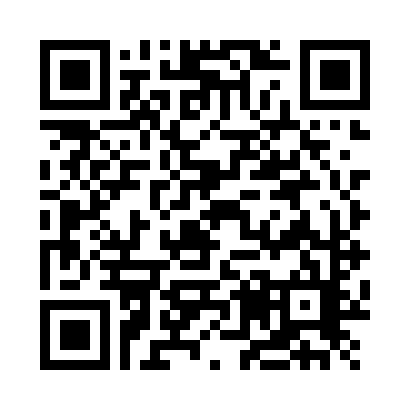