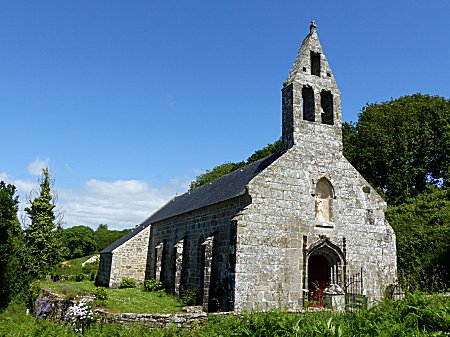 Access : From Le Conquet, take the D67 road towards St-Renan and 1 km after the crossroads, turn left towards Trébabu. Cross this pretty little village and continue on the same road then turn left. We're coming to the chapel. Park at the bottom of the hill. 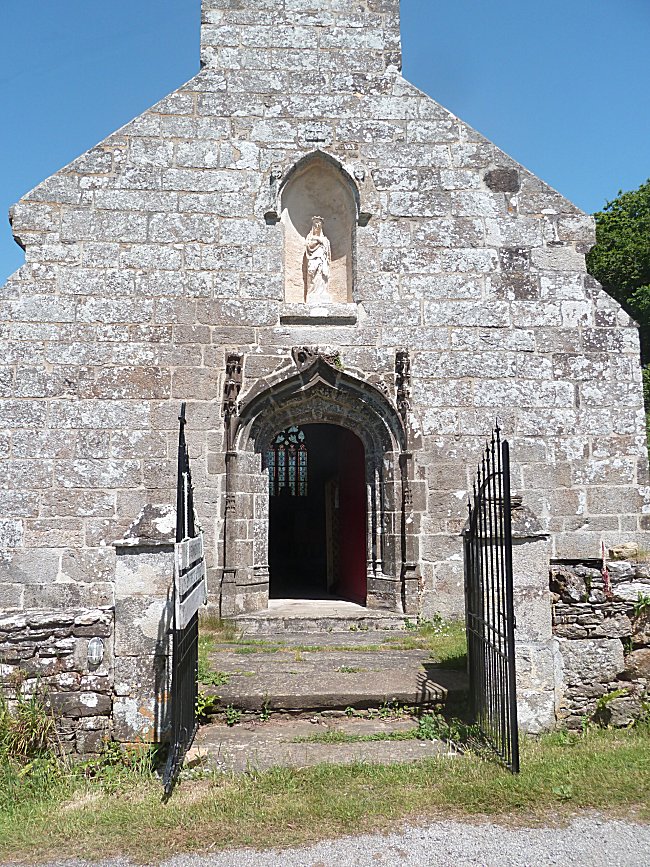 The portal is surmounted by arches in kersanton stone that may date back to the XVIth century. This pretty little chapel, nestled on the slope of the Kerléo valley with its lush vegetation, deserves to be better known. Strictly rectangular in plan, it benefits only from the addition, at the back left, of a small building receiving the sacristy. Its bell-tower wall with a Provençal look attracts the eye. It has two openings intended to receive the bells but only one is occupied. A few steps on the wall's ramp allow access. Standing in a niche overlooking the entrance, Our Lady of Good Help watches over visitors.

On the left side of the building, it can be seen that a basin has been developed and steps allow water to be drawn down from it. 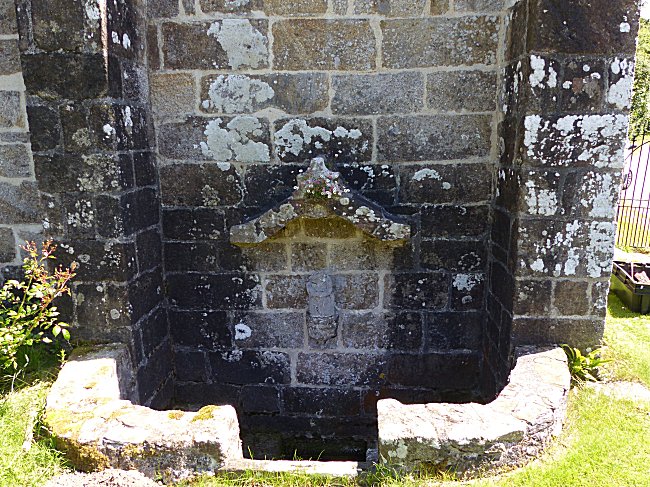 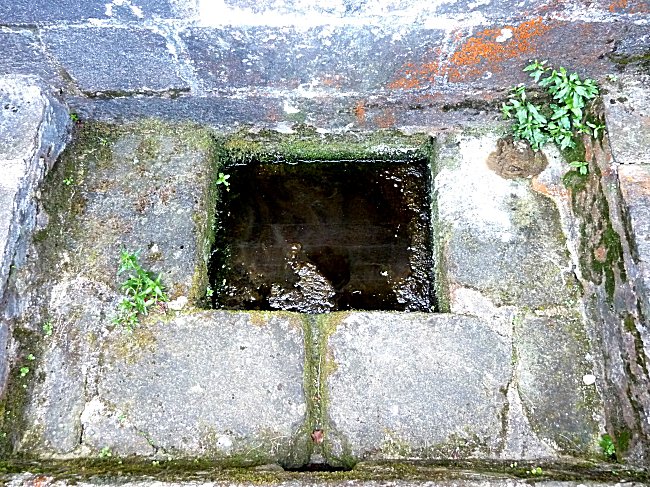 Look carefully, the basin has no visible water supply. However, it is always full. It is thus fed by a spring flowing under the chapel.
It is said that this miraculous water would cure children suffering from stuttering or other speech problems. The wall of the chapel above the basin is decorated with an enigmatic stone statue, representing a monk or a pilgrim leaning on a stick. The head of the statuette has disappeared quite recently. 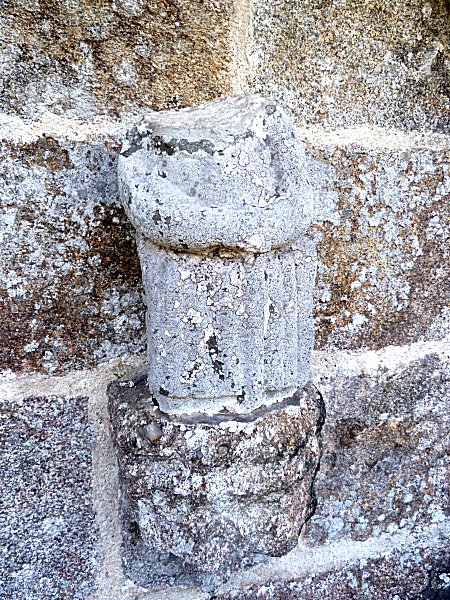 It is possible that this source and its presumed virtues date back to the Gallic period and that it was then Christianized by the construction of a religious monument. Indeed, the commune of Trebabu owes its name to Saint Pabu, a familiar appellation ( pabu = pope) for Saint Tugdual who, it is said, coming from Wales, would have reached on the beach of Porzh Pabu, in the peninsula of Kermorvan, in the Vth century. Accompanied by 72 disciples, he would have founded a hermitage in Trebabu and although there is no trace of it, it is quite possible that its location was chosen near this source. Would the statue represent the saint?

A little further on, on the same north wall, there is a very old kersanton stone sculpture sealed above the side door. 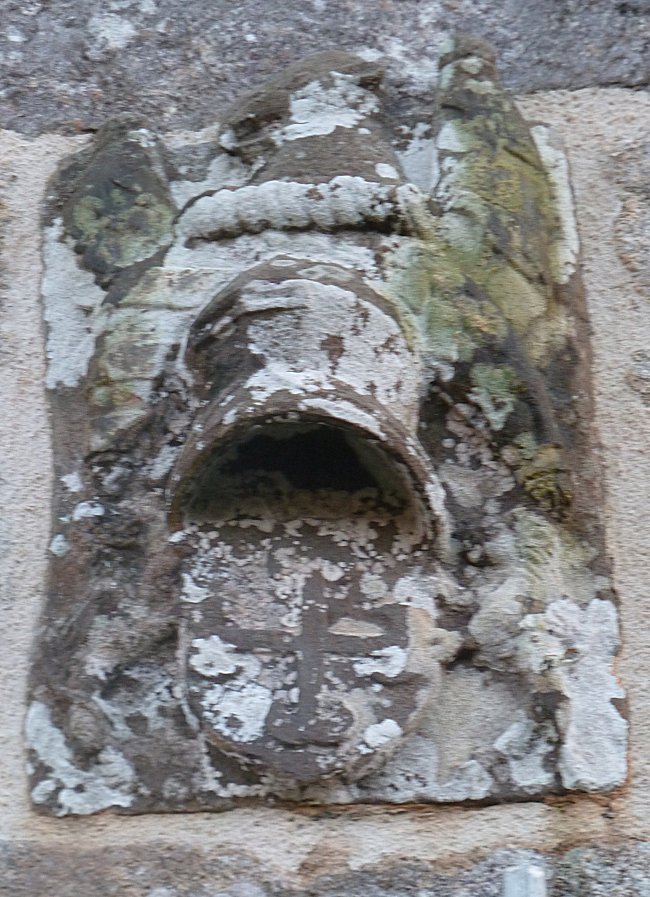 Very eroded and covered with lichen, having long since lost its bright colors, it represents the Kermorvan lords coats of arms and deserves to be examined more closely.
There is an anchored cross supported by two lions. It is surmounted by a prominent helmet with, above it, an eagle's head facing to it's right.
On each side of the helmet hang mantlings, those pieces of cloth that protected the necks of knights in armour.
The interest of this sculpture lies precisely in these mantlings. Each of them is indeed decorated with a coat of arms in order to represent a genealogical alliance with another seigneury :

- The oldest marriage, shown on the left landmark 3 below, is that of Yvon de Kermorvan with Azenore of Kergroadez at the end of the 14th century.
- On the right, landmark 2, is represented the alliance of their son Robert de Kermorvan with Marguerite An Ormant of Rouazle between 1410 and 1415.
- At the top left, landmark 1, the very large stoats represent the marriage around 1430-1435 of their son Yvon de Kermorvan, still a Yvon, with a lady Du Chastel de Lezerivy whose first name we do not know.
- Finally on the right, landmark 4, a third Yvon de Kermorvan, son of the previous spouses and sponsor of this work, married around 1450-1455 with N. Guiomar de La Petite Palue.
- The anchored cross in Marker 5, which can be found throughout the chapel, recalls the building's belonging to the lordship of Kermorvan. This stone in kersanton, now greyish and barely legible, were both splendid and imposing when painted in bright colors. 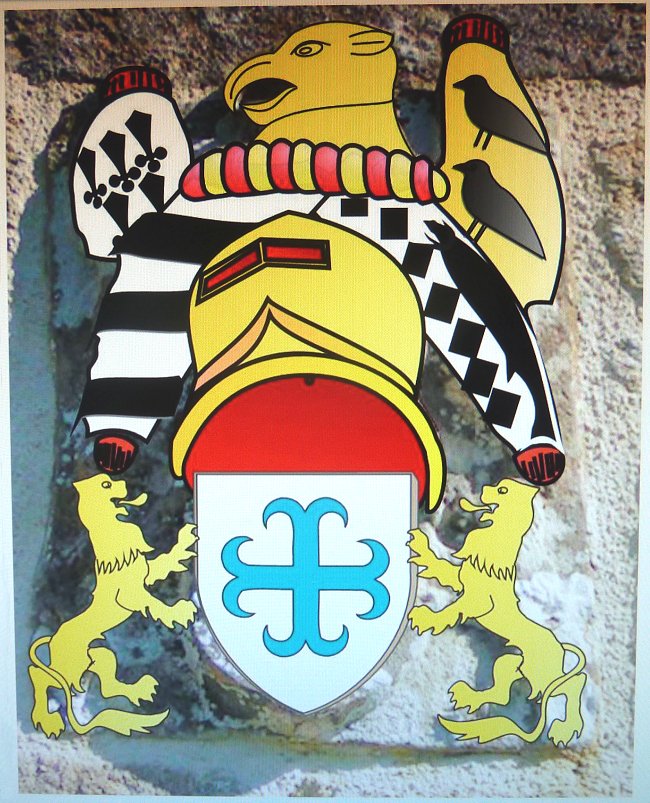 The genealogist Michel Mauguin, to whom we owe this remarkable restitution and who has carried out an in-depth heraldic study of the entire commune of Trébabu, makes it available to Internet users at the bottom of this page. 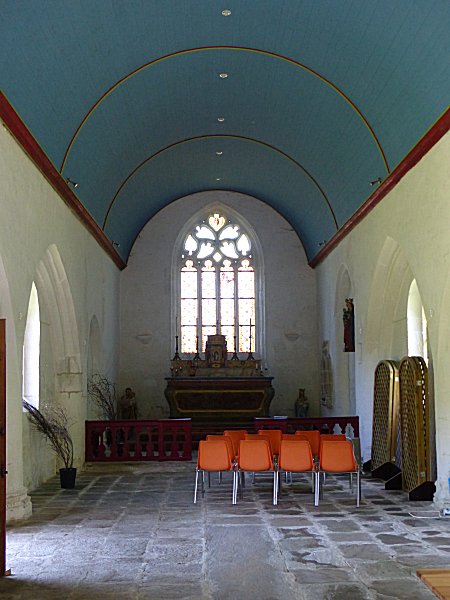 The large stained-glass window behind the altar has a series of four unusual trilobal openings in its upper part.
The ground is covered with long slabs of schist from the old coastal quarries of Le Conquet. Some of these slabs could be tombstones. The barrel vault was repainted in 2004. But let's look at the walls: 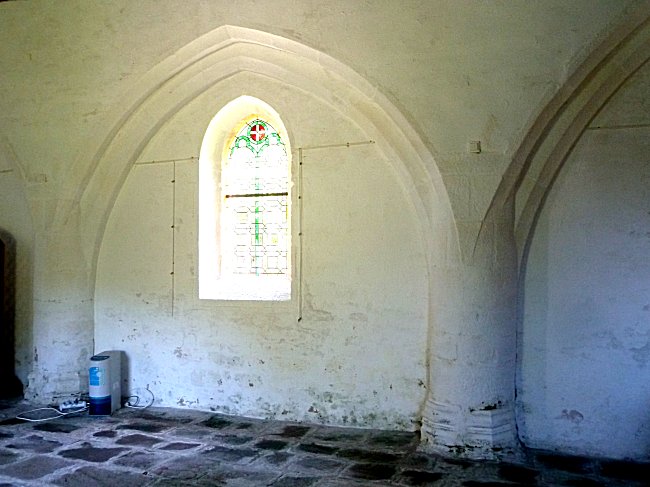 Neo-Gothic arches and half-columns suggest that an additional span could have been added on either side of the building in the past. On the outside, however, there is no trace of it. Only buttresses were built behind the columns. Unless it is only an architectural ornament intended to break the uniformity of the walls, it is possible that this extension of the building, planned from the construction, has never been realized.

Outside, as inside the chapel, one finds a little everywhere on the walls, carved in stone, the cross anchored of the coat of arms of Kermorvan Lords, former owners of a vast domain including the chapel, and whose castle is close to the church of the village. 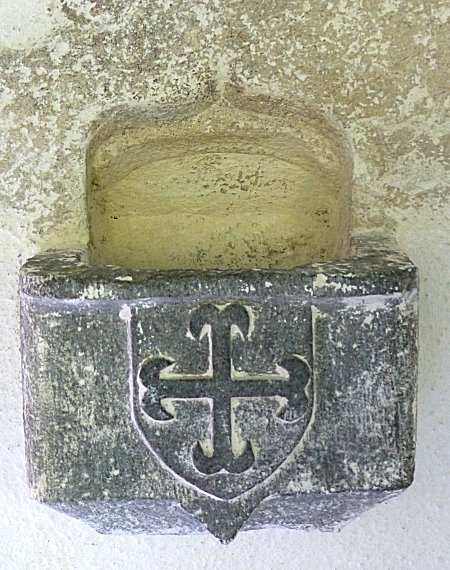 This anchored cross can be seen also to the left of the entrance. Held by two lions, it appears under a helmet framed by two raptors.
One still notices a head leaving the wall, carved in stone and placed very high, to the right of the entrance.

This sculpture doesn't fail to surprise : perched on a long neck, the head, very lengthened towards the back, presents a neat hairstyle. A cavity has been dug on the top, suggesting that it may have been used as a support for a candle that the lengthening of the skull would have the effect of keeping a long distance from the wall.
Near the altar, another carved head surmounts a niche in the right wall. His face seams wearing a goatee.

Nearby, a very pretty polychrome wooden statue of the XVIth century attracts the eye. This is undoubtedly the attraction of the chapel. It represents the Virgin carrying the child Jesus on her right arm, and not to her left as is customary. While her face is serious, that of the Child seems a little mischievous. His left arm presses on his mother's neck, as to keep her away, and he extends his right arm to fetch the fig that she holds in her left hand. This Virgin to the fig is not unique but she is rare and little known. In Brittany she can also be found in Berrien, Plougonven, Lampaul-Guimiliau and Spéret. The fig is perhaps a symbol of virginity since in the wild state, the flower can only be pollinated by a specific insect, the blastophagus.

One can read on the base, in Breton : I varia an traon. This precious statue, once displayed in a high carved wooden display case, was firmly sealed into the wall since 2005. Indeed, at Trebabu , everyone still has in memory the theft to which it had been subjected in 1977 and its return 28 years later. An incredible fugue of which here are the details.

Each year, traditionally on Assumption Day, the pardon of Notre-Dame du Val was celebrated. After a solemn high mass in the evening, a procession was going by torchlight along forest paths from the chapel to the great Calvary of Kermorvan located at the gates of the castle. Among the banners, the statue of the Virgin and Child, carried by several parishioners, accompanied the faithful.
In 1976, during a sunny and particularly hot summer, forgiveness was cancelled because of the storm.
Did the venerable boarder dissatisfied with this deprivation of a big outing ? Still, a few months later, she was gone ! At the pardon of 1977, the sadness of the faithful was painful to see. 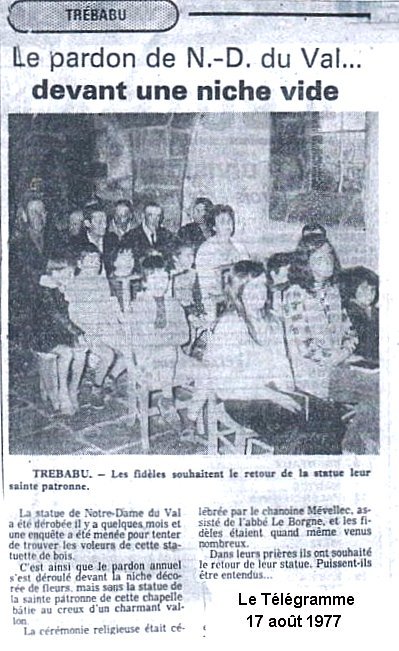 And so for many years, Notre-Dame du Val was absent from her chapel.

In the Var department, a stone's throw from Toulon, the small town of Solliès-Pont is the fig capital in France. Three quarters of French production comes from that country. A firm fig, in controlled designation of origin, and of excellent quality. The fig festival, major event of the year, takes place every year at the end of August. 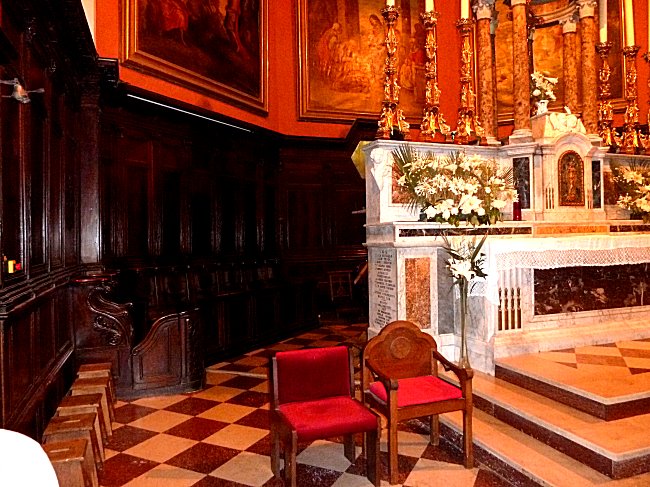 Solliès-Pont church (Var) : the back of the altar. Photo Y.L.

One day in 2004, two priests from Solliès-Pont discovered an object that had been deposited behind the church altar. It is the polychrome wooden statue of a Fig Virgin unknown to them. But they are used to anonymous deposits of relics and sacred objects. Several months later, by chance, while investigating the theft of a tabernacle, the gendarmes were made aware of this discovery. Photos are taken and distributed in all brigades in France. The base that carries the words " I varia an traon" intrigues. But in Quimper, a Breton gendarme immediately understands: I varia, is put for Itron-varia, "Lady Mary" in Breton, therefore Notre-Dame in French. An traon, it is the val. Notre-Dame du Val, he knows the name of the chapel of Trébabu, near Le Conquet, in Finistère.
Thus, after an absence of 28 years, the runaway Virgin was able to return to her home.
The investigation never allowed to know neither the author, nor the reasons of this curious abduction. But it is likely that this respectable Itron Varia was sold on an underground art market, then given back by a repentant collector or an honest heir in the only church in France where the presence of a carved fig seemed self-evident.
Before her return, however, the Virgin underwent a remarkable restoration co-financed by the commune and the department, and intended to erase as much the traces of her travels as the outrages that the time and the various places where she had been stored had inflicted on her. 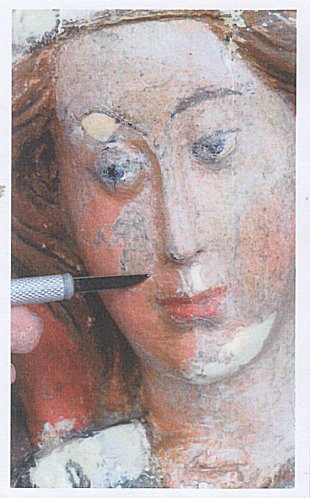 And since, in 2005, a strange coincidence, the Notre-Dame du Val chapel had also just been restored. There is no doubt that the Virgin of Fig had decided to come back, all dashing and rejuvenated, to use for the first time her new old home. 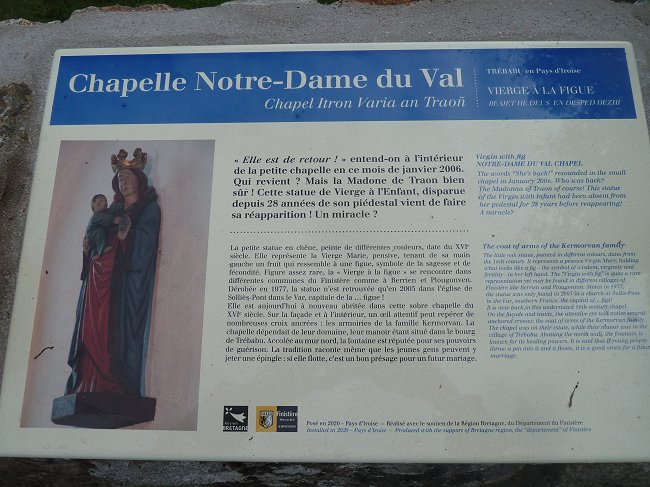 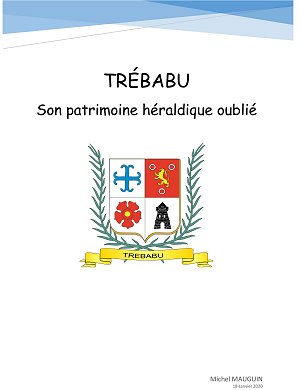 Animations are planned every year in the chapel: exhibitions, concerts and songs. See on this website the section Animations and festivals . 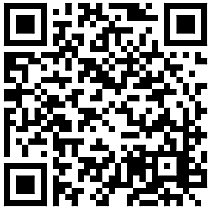