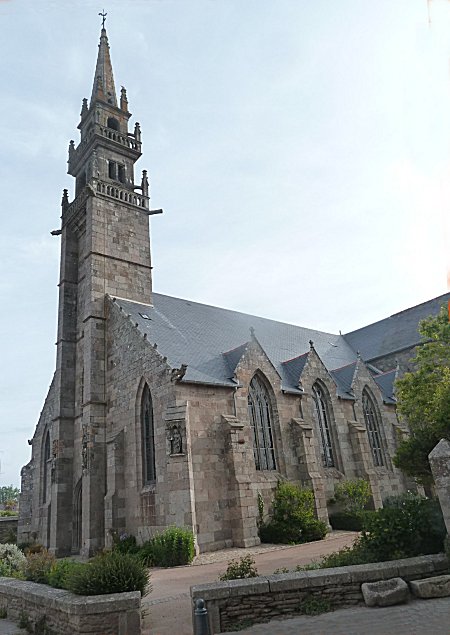 The church of Le Conquet is unusual : with its Gothic allure, the ancient statues which adorn its façade, its tomb of the XVIIIth century and its large flamboyant stained-glass window, all these elements being classified as Historic Monuments, it seems several times centenary. However, the church was built in the middle of the XIXth century. Actually, it's a travelering church...

The entrance to the church is 100 m Poncelin Street.

The date of construction of this building, 1856, appears above the entrance gate. However, it is not a complete construction from this period. Indeed, we can read on the nameplate affixed to the left of the Church : 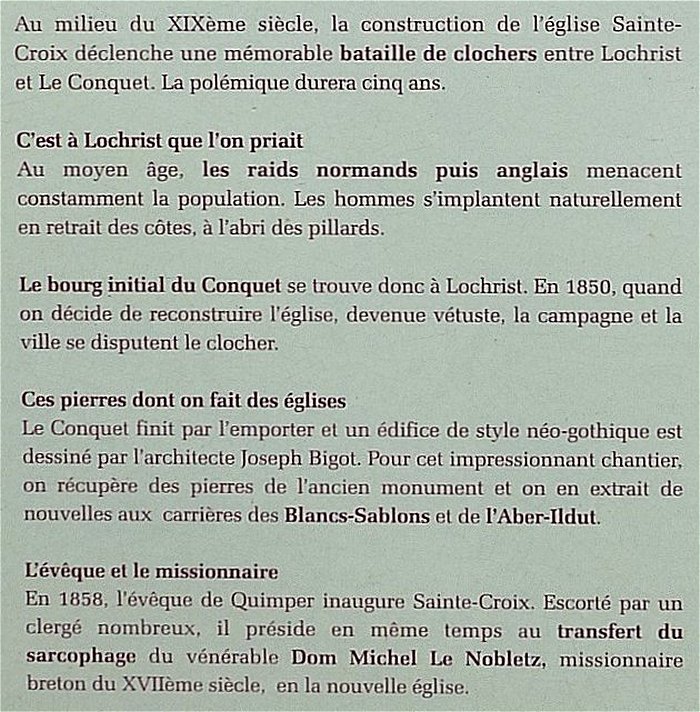 Instead of incurring very high costs in order to restore a dilapidated and decentralized church, because located 2 km from the main agglomeration, the municipality of the time, by 6 votes to 5, decided a deconstruction, a transfer and a reconstruction. But let the Le Conquet historian Jean-Pierre Clochon tell us the rest:

"Then a scenario seems to have been matured in advance: Jean-Marie Le Guerrannic, mayor of Le Conquet, wine merchant and shipowner, sold on 14 July 1855 for 5000 F, to François Tissier, director of the iodine factory, a land located into the town of Le Conquet. On the 20th of the same month, Tissier offers the land in question to the municipality of Le Conquet to build a church. Since that day and in perpetuity, the Tissier family holds four reserved seats in the church of Le Conquet. ( The altar stone is also a gift of François Tissier, it bears a dedication at the bottom right looking at the nave). » 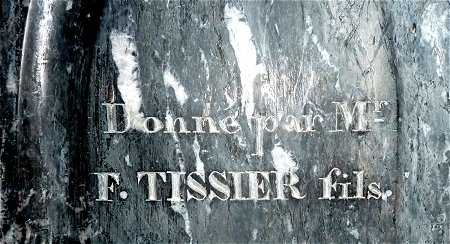 The foundation stone of the new church was laid on 29 January 1857. Final acceptance of the building took place on 20 April 1858. Only fifteen months were therefore enough to complete these gigantic works. But the work was considerably simplified by reusing most of the stones from the old church of Lochrist and the St. Christopher's chapel. ( St. Christopher's Chapel ).

However, the plan of the new building is significantly different from that of the old one.

The total invoice has amounted to 62,401.98 francs, whereas the forecast was 70,000 francs. The new church is a little bigger than the old one. It has the shape of a real Latin cross and its bell tower, copied from the old one, is no longer flanked by the high turret that housed the staircase leading to the galleries and the bell room. 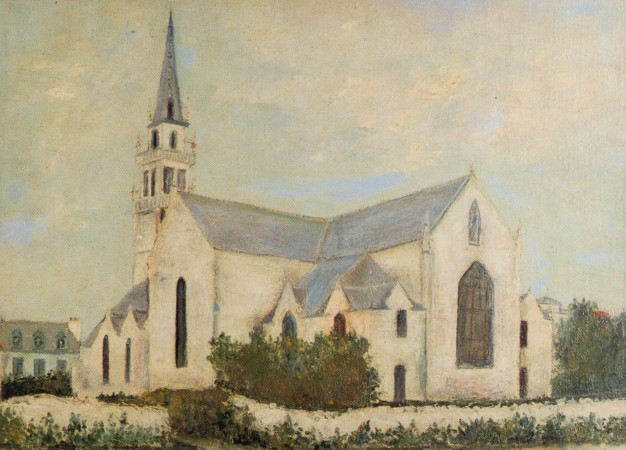 Subsequently, roof repairs were carried out in 1932 and 1937. In August 1944, the church was severely damaged by bombardments. It was not until the 1950s that the spire of the bell tower was rebuilt and the restoration work was completed. The zinc gutters were installed in 2005 and the cross of the spire in 2012.

The statues on the façade 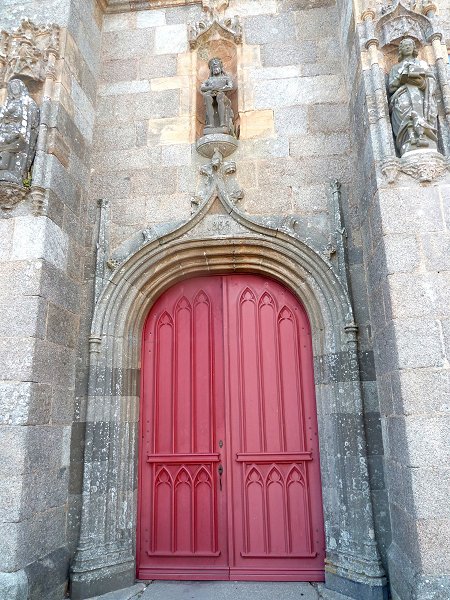 As in the past, three statues, classified as Historic Monuments in 1914, dominate the entrance gate. Two others sit at the corners of the façade. The most beautiful, the most moving also is this Christ of Pity, or Christ in bonds, who, only clothed in his perizonium, waits peacefully, to be judged by the Sanhedrin 1.

Ecce Homo of the façade

At the corners of the façade are two other statues. More exposed to bad weather and bird stains than those of the gate, they are very degraded.

The dilapidated state of all these statues betrays their age. They probably predate the construction of the old church of Lochrist which dated from the XVIth century. Perhaps they already adorned the previous Church ? Experts indeed date them from the XVth century.

The bell tower has two beautiful galleries. Underneath the first are protruding sculptures that resemble gargoyles. At both corners of the façade, they represent fantastic animals and they are indeed gargoyles designed to drain rainwater from the gallery away from the walls. At opposite angles, they are guns and one can see very well that drawn up towards the sky, they would not allow water to flow towards the outside. Would they only have a decorative purpose ?


It seems rather surprising to discover firearms represented on a place of worship. But this is the case in several churches in Leon and particularly in the Iroise Country. See our discovery tour : Iroise's guns . 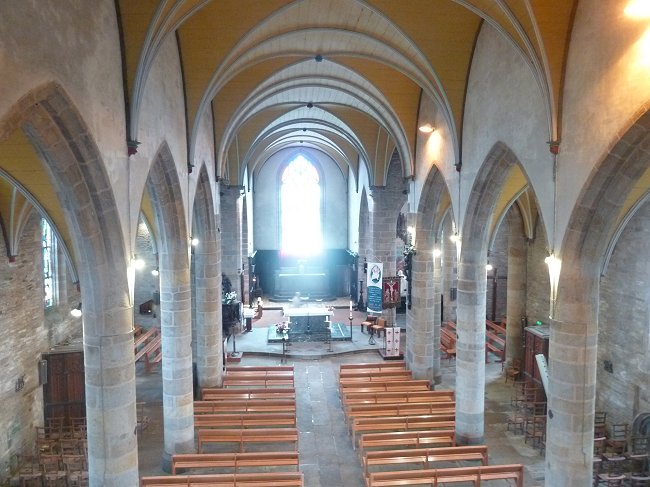 The very classical plan of the church as well as the interior restorations of the 1950s make the visitor first believe that the nave is nothing exceptional. It is necessary to go through it with curiosity to measure all its riches. For example, the side walls are adorned with decorative carved elements moved from ancient 'enfeu' from the Lochrist church. An enfeu is a tomb nich into the wall where was put the coffin of an important priest. 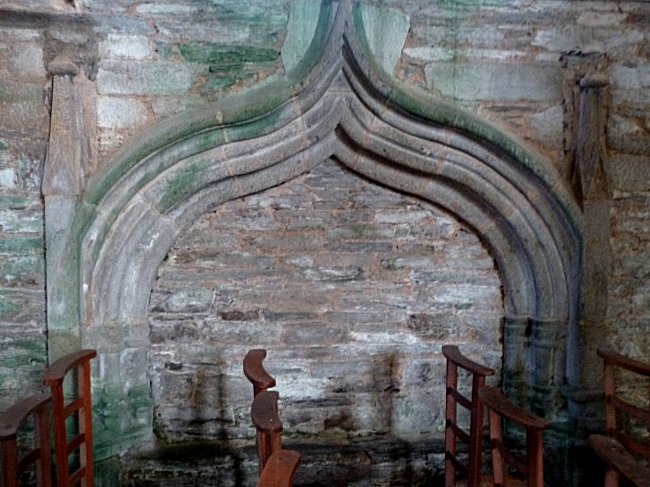 In the right wing of the transept is an imposing black marble tomb surmounted by a magnificent statue. 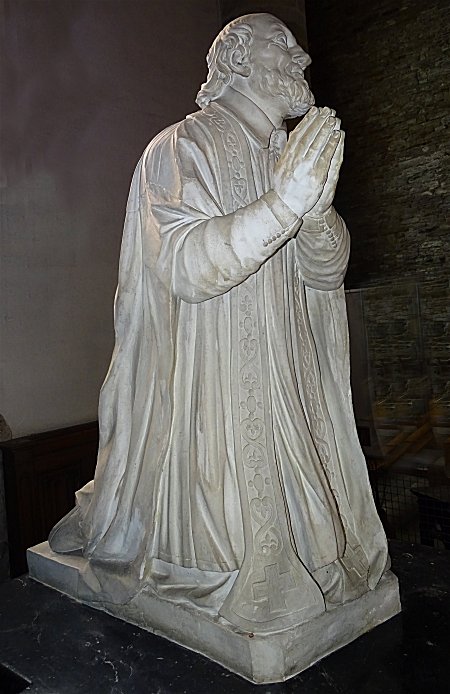 It is the tomb of Dom Michael Le Nobletz, the famous Breton missionary priest of King Louis XIII's time. An ardent defender of the poorest, a fervent preacher of Catholic counter-reform to the point of being nicknamed in Breton 'ar beleg foll' ( the mad priest ) by his detractors, he spent the last twelve years of his life at Le Conquet in a house that since has been transformed into a chapel. ( La chapelle Dom Michel ).

His talent as a speaker and his very educational method of illustrating his words with large drawings, the taolennoù, which he commented to the public, are at the origin of his fame. A century after his death, this white marble statue was the work of Philippe Caffiéri, head of the Brest harbour sculpture workshop. The tomb and statue were listed as Historic Monuments in 1906. 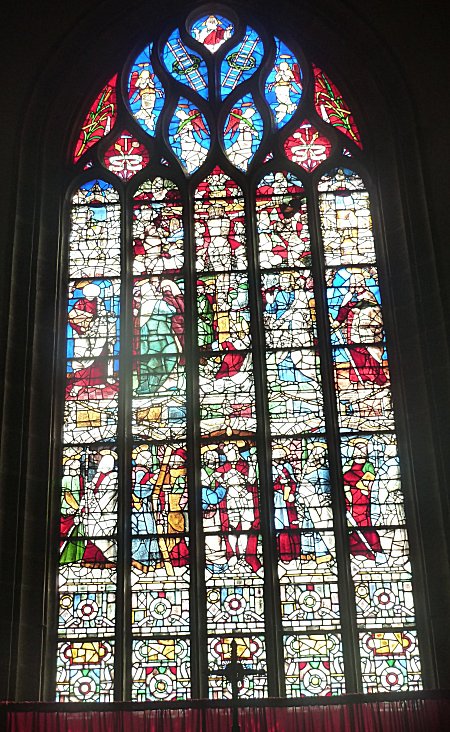 At the back of the chancel, the large stained-glass window of the Crucifixion
listed Historic Monument in 1938

It was undoubtedly a feat to dismantle, to move from Lochrist and then to reassemble this chancel's master window dated from the XVIth century. It was shattered during the 1944 bombardment and its pre-war classification allowed it to benefit from a restoration with a filling of the voids that does not hinder too much the understanding of the whole.

At the ends of the transept that houses the tomb of Dom Michael Le Nobletz, we can admire two beautiful stained-glass windows painted in 1932 by Robert Micheau-Vernez ( 1907-1989) and made by the master glassmaker Emmanuel Rault. Each episode of the missionary priest's life is accompanied by a legend in Breton.
For example, in the southern transept above the tomb, the first episode of the stained-glass window is as follows : 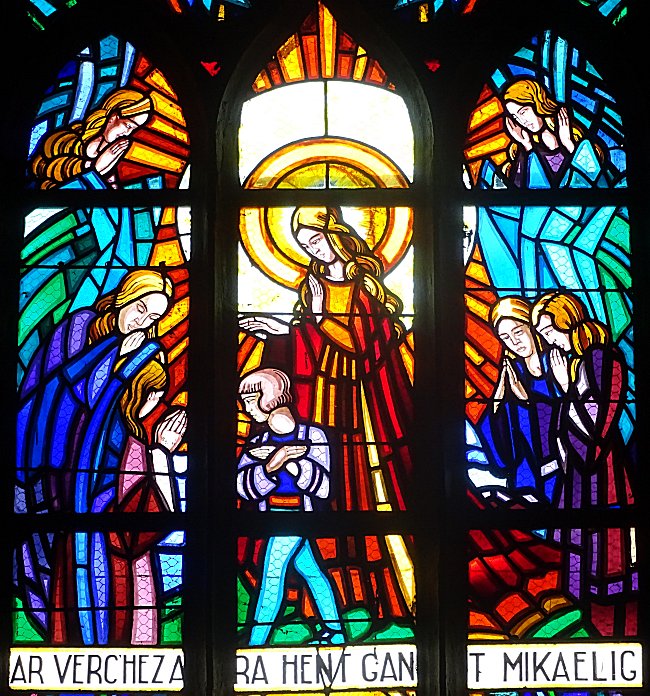 AR VERC'HEZ A RA HENT GANT MIKAELIG : The Virgin is on her way with little Michael.

This is the childhood of the preacher who is immediately placed under high protection.

We will let you discover the illustrations of other episodes of this stained-glass windows of which here are the legends :


And now, let us cross the church and pass to the North stained-glass window located opposite. It reads :


The other stained-glass windows of the nave, by their modernity, contrast with the previous ones. Realized in 1960 and 1970, they are the work of the master glassmaker Jacques Bony who took for theme the great characters of the Church.

Very colored and stylized, most of the stained-glasses also have in common the verticality of their various elements. One will notice that two by two, on either side of the nave, they seem to speak to each other so much their style corresponds.


At the top of the pulpit is a discreet varnished wooden statuette. It represents the Virgin and her Son and shows traces of erosion due to the fact that at the time when it was still polychrome, it had been placed outside, in the niche of the chevet. 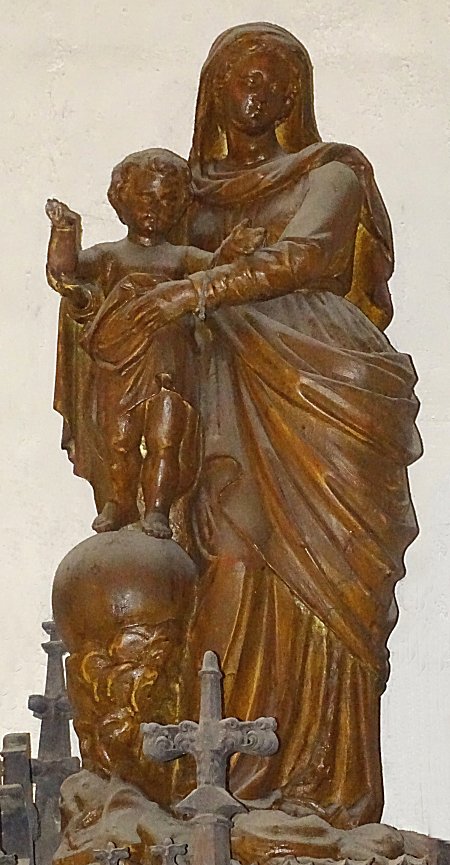 The junction of the transept and the nave is a particular space which, at the base of the vault's ribs, is watched by four very original sculptures which are difficult to observe because they are not illuminated by the neighbouring spotlights. Four squires2 almost identical each are holding a crest with an inscription.

Very discreetly, since these inscriptions are not readable from the ground, those responsibles for the transfer and construction of the church thus signed their work in the manner of medieval craftsmen. This reference to the past reflects their pride in having laboriously accomplished work for posterity. And to avoid any confusion, they honestly engraved the date.


Finally we must take a look at the superb organ buffet3 overlooking the entrance to the nave. This great instrument, which endows the ceremonies with an incomparable solemnity, was made in 1872 in his Quimper workshop by Jules Heyer. Together with Aristide Cavaillé, this famous Polish organ builder had contributed to the construction of the great organs of Notre-Dame de Paris. Jules Heyer built the Quimper Cathedral organ and most of the organs in Brittany. 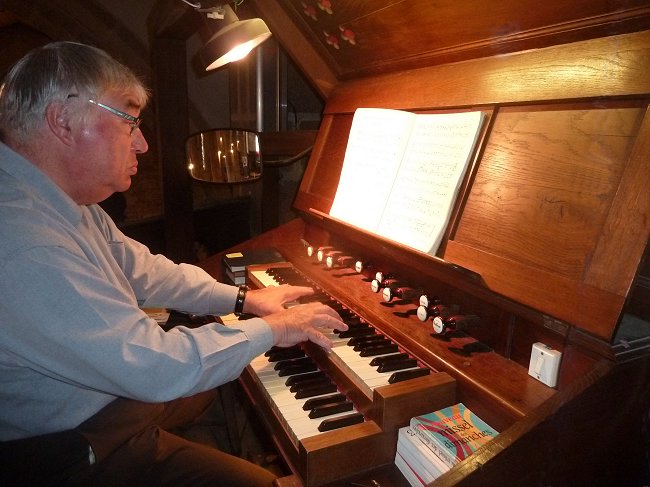 The Le Conquet's organist Jean-Pierre Séguin, former Director of the Conservatoire of Tours and of the choirs of the Chartres Cathedral.

As we can see, the Le Conquet Church contains a number of elements of our heritage that deserve to be better known and recognized. Because their knowledge should not remain only a matter for specialists. It constitutes an undeniable cultural advantage that both a good part of the population as well as the tourists who visit the city seek.


1- The Sanhedrin was the supreme court of Israel.

2- It is also possible that these characters are angels, like those of Locronan's recumbent who also wear crests. The ribs of the vault would simulate their wings. Their very high location would also support this hypothesis.

3- Here is what titular organist Jean-Pierre Séguin says :
"The Church of the Holy Cross was endowed with its organs at the time of its erection in 1872 by the will of the mayor of the time: François TISSIER and who offered it on his own funds. It is the work of the Quimper maker Jules HEYER and it is one of the 23 classified organs of the Finistère department.
It includes two keyboards (a Grand Orgue and a Récit) of 56 notes each and a 30 notes pedalboard. It has 11 registers, 4 for the Great Organ (8' Watch, 8' Harmonic Flute, 4' Prestant, Plein Jeu), 6 for the Récit (Principal 8', Voix Céleste 8', Bourdon 8', Flûte 4', Nazard 2 2/3, Hautbois 16') and 1 for the pedalboard (Soubasse 16').
Both keyboards can be coupled in 8' and 16' and the instrument has Tirasses 1 and 2 for the pedals. »

Thanks to Jean-Pierre Clochon and Marcel Quellec for their help and their supply of documents, to Roger Coguiec and Gérard Bosch for the realization of photographs in difficult conditions.


Animations are planned every year in the church:
organ concerts and choral singings.
See on this website the section Animations and festivals . 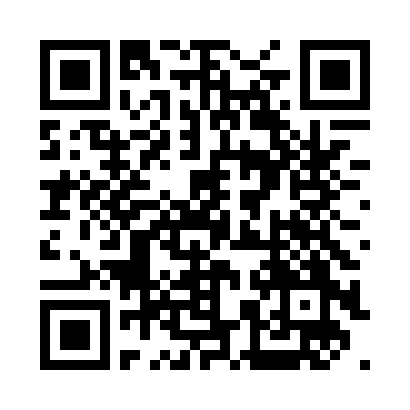