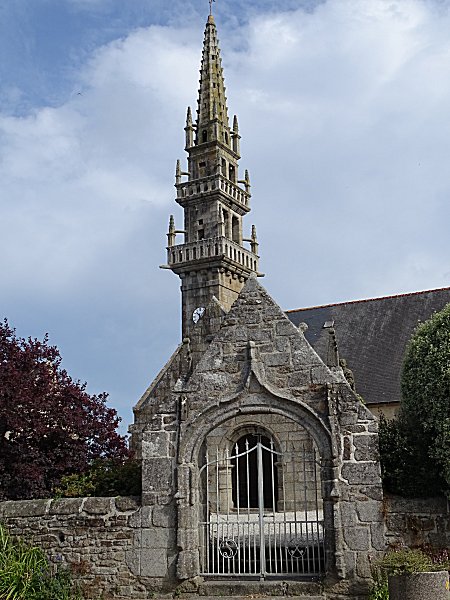 Access : From St-Renan, take the D38 road towards Milizac.
Park in front of the church enclosure.

One enters the enclosure through a metal grid surmounted by a beautiful ogee arch. Dominating the entrance, two small statues watch over the visitors. They are Saint Peter and Saint Paul, the patrons saints of the church, whose symbols are repeated on the grid.

St. Peter and the keys to Paradise

It seems only natural that this church should be dedicated to two apostles of Christ. Yet, in Milizac as in other parishes around, there is probably a more or less voluntary transfer from a local cult to traditional saints of the Church. This confusion would relate to the passage in the country of Saint Pol Aurélien, the monk evangelizer of this part of Armorica. The tradition wants that in the VIth century, coming from Wales, Saint Paul - or Pol - Aurélien, after having reached Ouessant island, would have approached the continent in Porspaul, the port of Lampaul-Plouarzel. Accompanied by several dozen disciples, he would have founded the monastery of the Priory there. Then he would have entrusted to one of them, called Peter, the direction of a small community that he would have installed in Lamber ( Lann-Per, the monastery of Peter in Breton). Paul-Aurélien would then have reached Lampaul-Ploudalmézeau, and then Batz island where it is said that he would have rid the population of a terrible dragon. It is proven that Clovis' son, King Childebert 1st, appointed him bishop and offered him the bishopric of Castel-Paol, the present St-Pol-de-Léon. Thereafter, the cult towards the two apostles would have replaced that, too local and not recognized, towards Pol Aurélien and his disciple Peter.

The church of Milizac, in its oldest part, dates from the XVIIth century as evidenced by a stone inscription on the apse's wall. 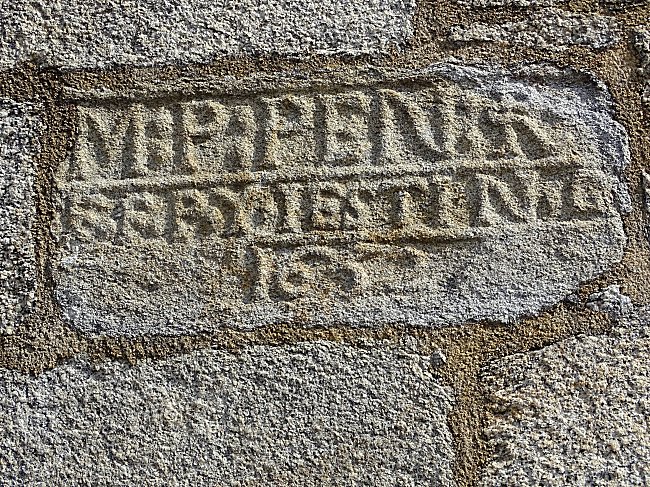 It reads the name of the rector of the time, Sir Pierre Pen, the name of architect Y. Jestin and the date 1652.

But since then other changes have taken place. The porch dates back to 1690. It is difficult to read several inscriptions that also signed works. 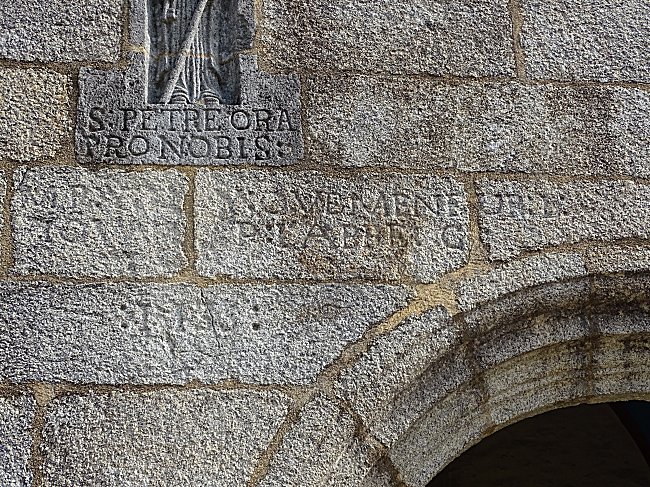 Higher up, in a niche, a statue of Saint Peter surmounts a more legible inscription, probably more recent. 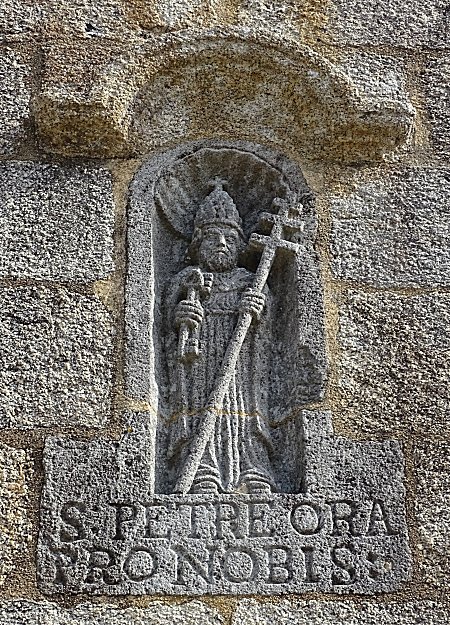 Saint Peter, pray for us. 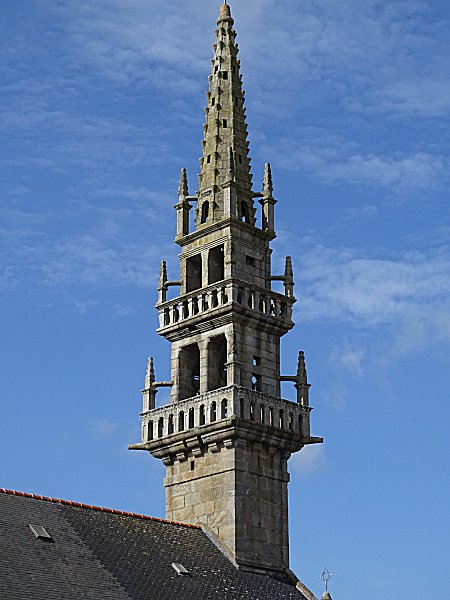 It has two superimposed galleries, each overlooking a bell room. Its openwork spire with hooks has an octagonal section. At the corners, on three floors, each pilaster is held by a buttress arch.

The spire was struck down by lightning in 1867. It was immediately rebuilt identically.

At its base, the large portal, not used nowadays, has no decoration. 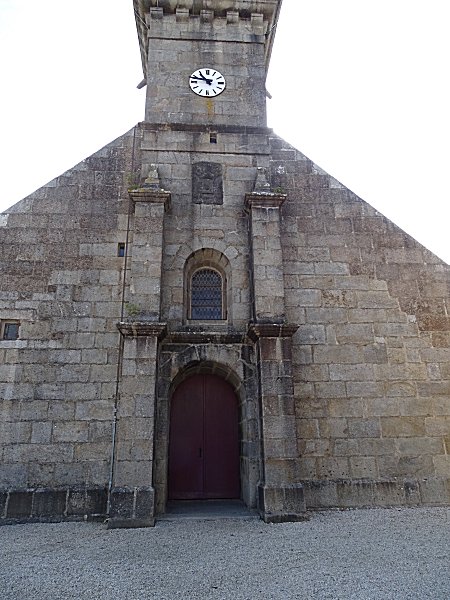 Between the two massive buttresses, one discovers old coats of arms almost completely eroded. It should not be forgotten that these stone coats of arms were once painted in bright colours. After careful study, heraldist Michel Mauguin has come up with the following reconstruction:

The central coat of arms is that of the Kernezne, a large noble Breton family. Michel Mauguin explains in french the composition which associates different coats of arms of the XVIth century : 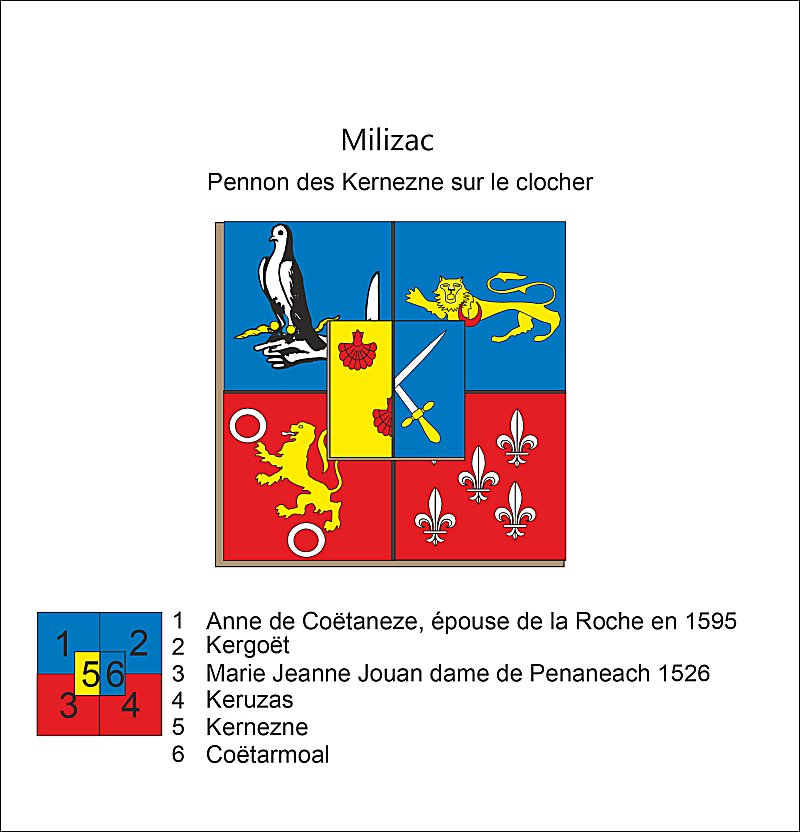 It should be noted that the porch of the current entrance is not located at the centre of the building's wing that receives it. The reason for this can be undestood by seeing the four small windows and the two built-in holy-water basins on the left into the wall. 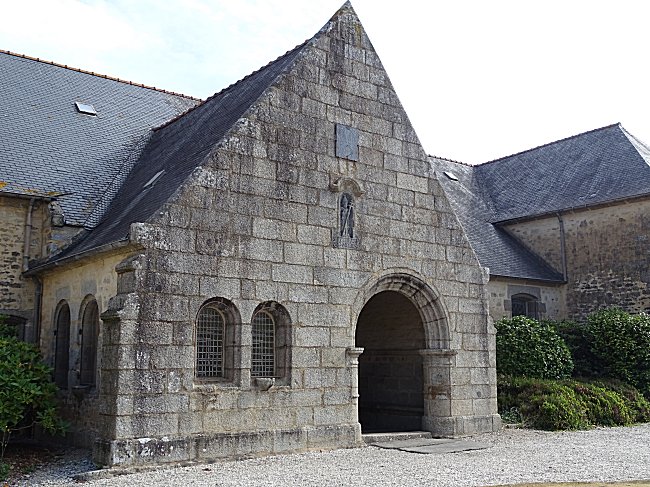 Behind these openings, which are now glazed, is the emplacement of the former ossuary. In the past, as the bays were not closed, one could pray from the outside and throw holy water on the bones of the deceased who were stored there in order to reuse their graves.

Placed above the porch, an original sundial dates from 1963. 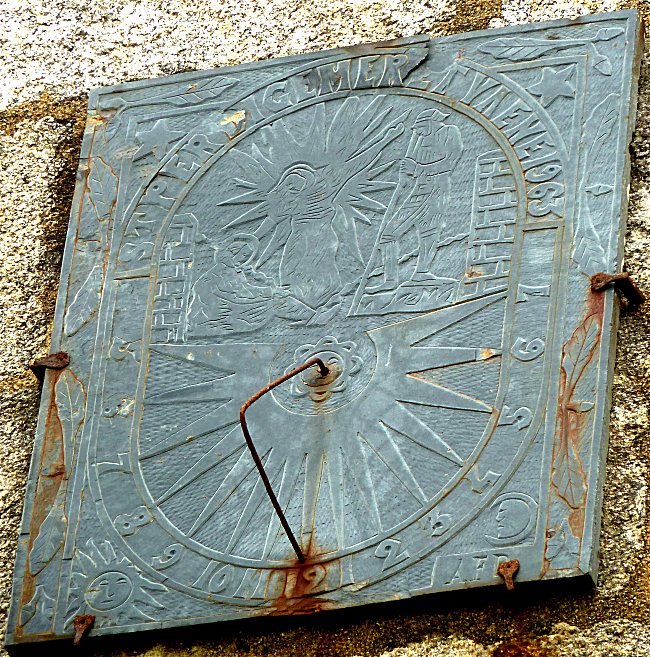 It is not only there for decorative use because it fully respects the imperatives of the specialty.
( Milizac's sundial )


To enter the nave it is necessary to cross the porch where thrones a very old Pietà in kersanton. 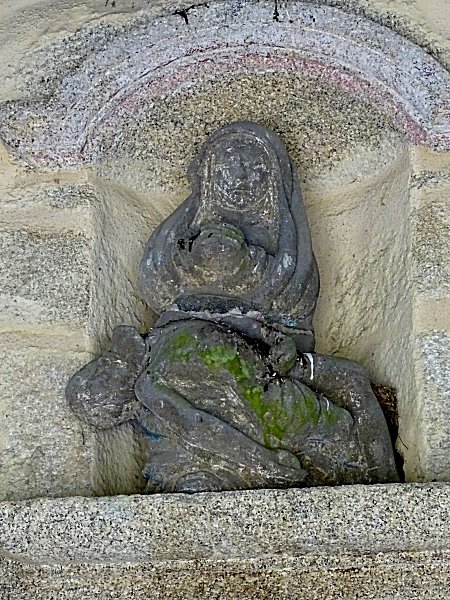 The state of erosion of this once polychrome statuette is surprising for a work so well sheltered. The porch having been built in 1690, it must be concluded that this statue was already at this site before this date, but outside and exposed to bad weather. And since it takes well over 300 years to corrode the kersanton to this extent, we can assume that the statue was recovered from the previous church where, still outside, it had already welcomed visitors for several centuries.

The interior of the building is vast. The nave has five bays with semicircular arches flanked by two aisles. 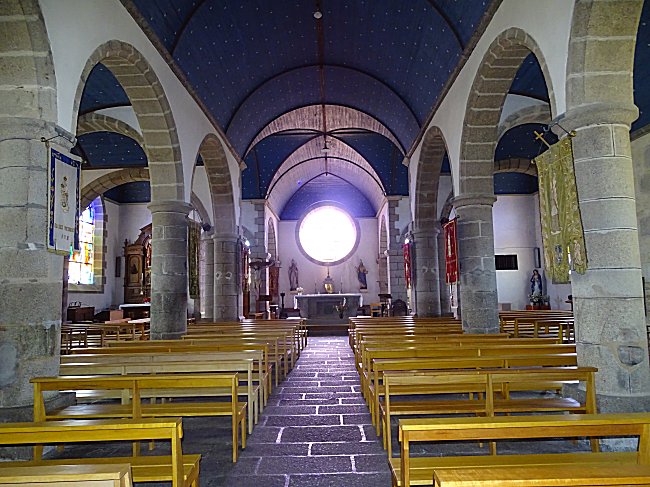 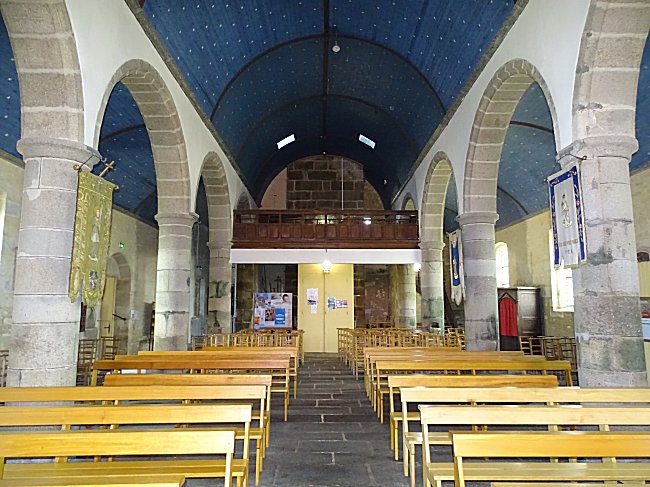 The vault, panelled in a barrel and painted blue, is decorated with golden stars.
A very deep gallery was built against the recessed bell tower. 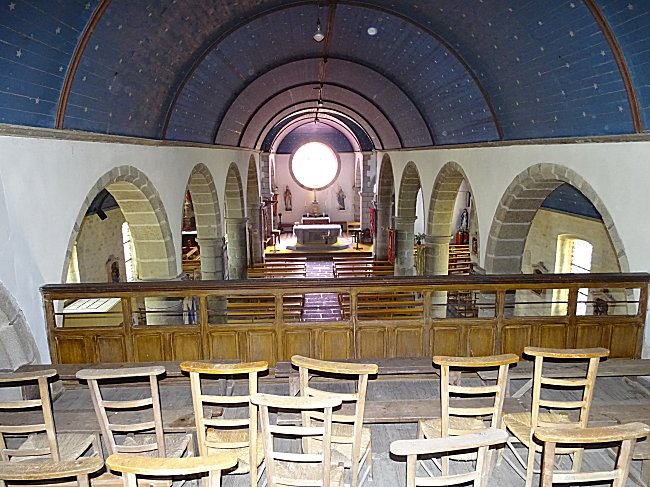 The nave is decorated with a rich collection of banners that are pulled out during processions. Some of them, very old, are works of art. 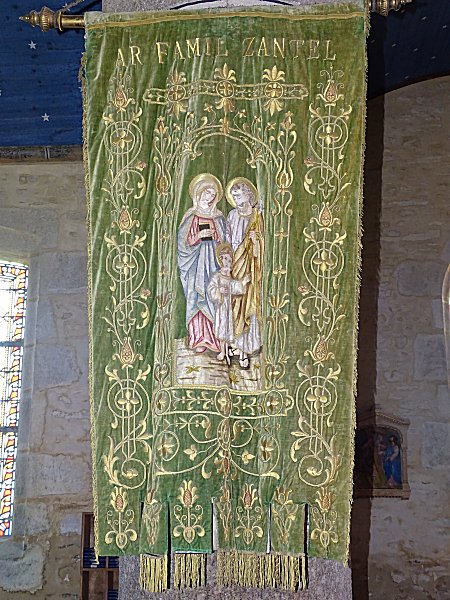 Stations of a cross-path decorate the walls of the aisles. 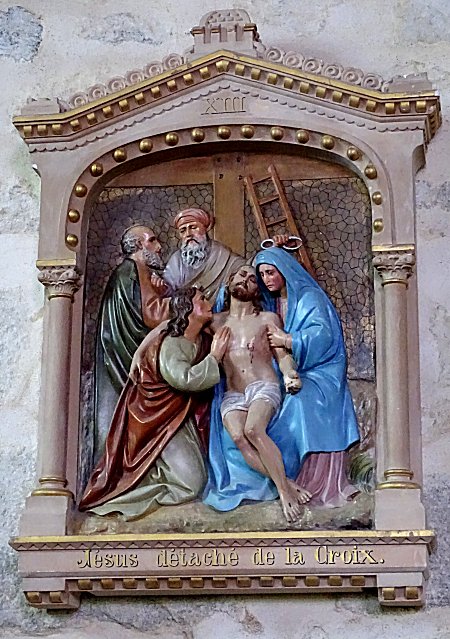 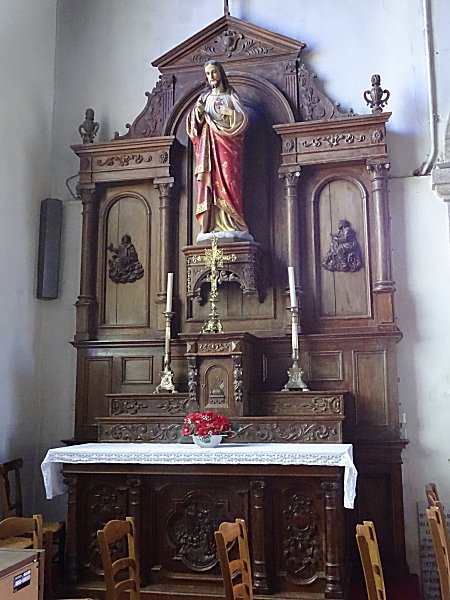 The altar and the tabernacle are enthroned in the flat chevet chancel. 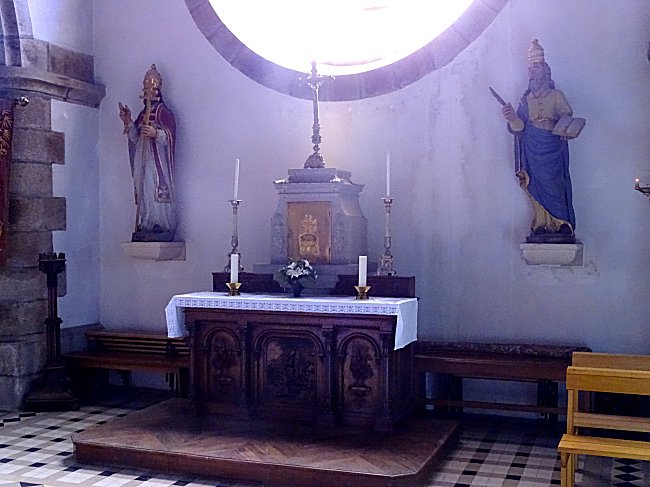 The statues of the patron saints of the church, Saint Peter and Saint Paul, watch over the services.


Both apostles are represented wearing a tiara. Saint Peter, considered the first pope, holds the key to Paradise and leans on the pontifical cross. Saint Paul, with a very expressive face, shows the epistles, the first written documents of Christianity, which are from his pen.

The master window that illuminates the chancel represents the Crucifixion. 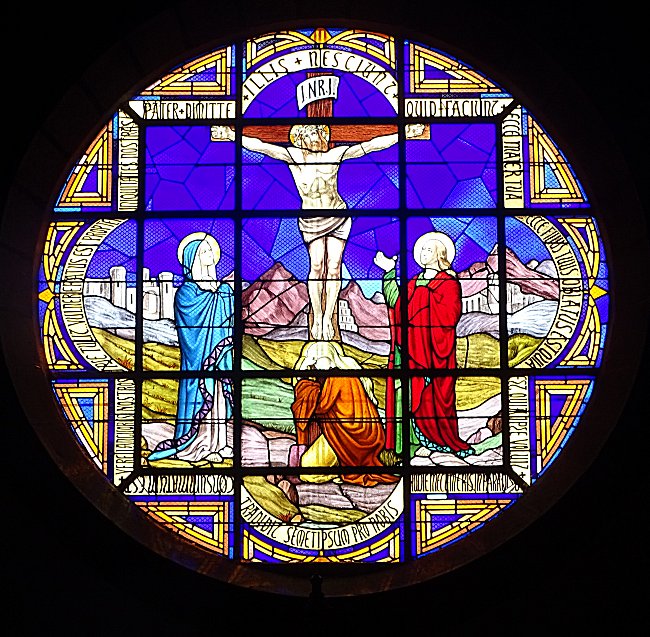 It is framed by a Nativity and the Holy Family in the carpenter's workshop.

At the ends of the transept, we recognize the Marriage at Cana and the resurrection of Jairus's daughter by Jesus Christ.

All these stained-glass windows are made with the same invoice but only the one representing the Holy Family bears a signature: workshops Léglise.

Finally, along the aisles, the two stained-glass windows that seem to come from another workshop represent the Ascension and the Assumption.

Before leaving the nave, let's take a look in the alcove at the far left of the nave. It's in this family space that the marble baptismal font is located : 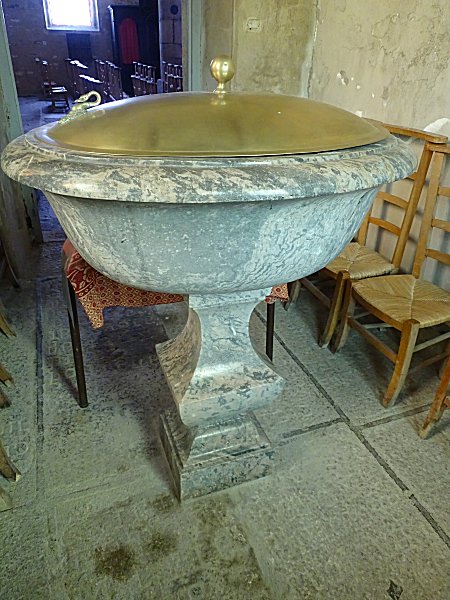 The copper lid of the basin is decorated with an uraeus

The Chapel of Saint Anne:

A second building with a bell tower stands in the parish enclosure. It dates from the XVIth century and is only open to the public on certain occasions. 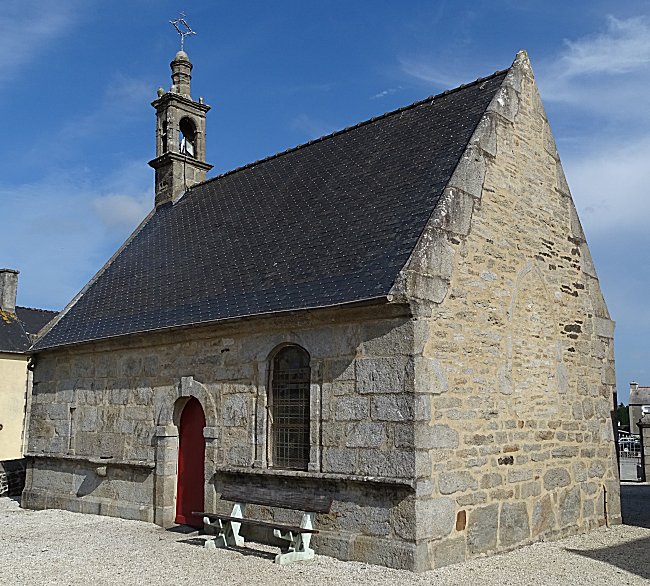 The interior is both modern and sober. 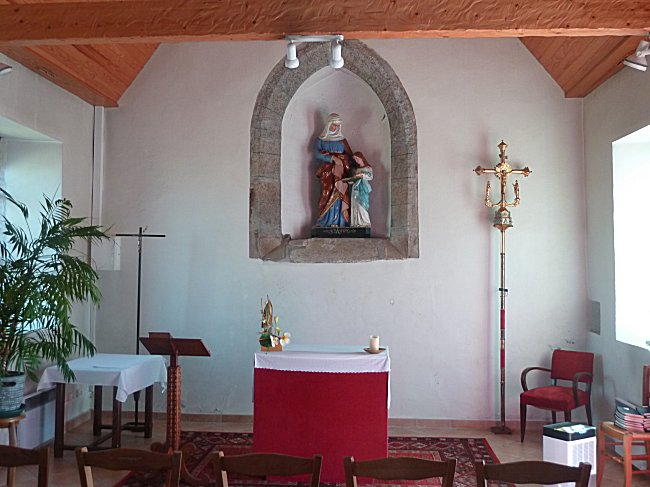 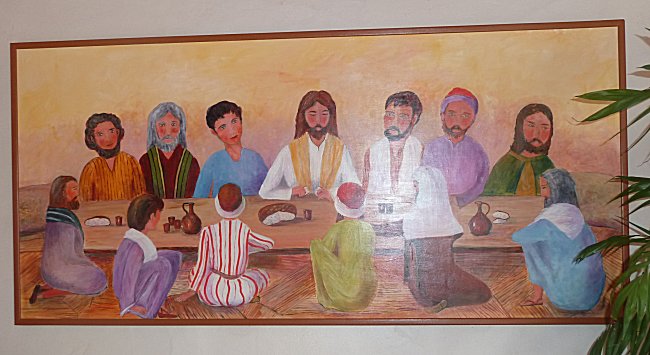 Thanks to Michel MAUGUIN who carried out heraldic research on the lords of the surrounding manor houses and kindly communicated them to us to put them below at the disposal of the Net surfers. 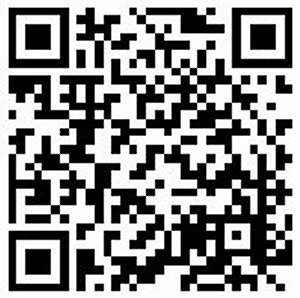