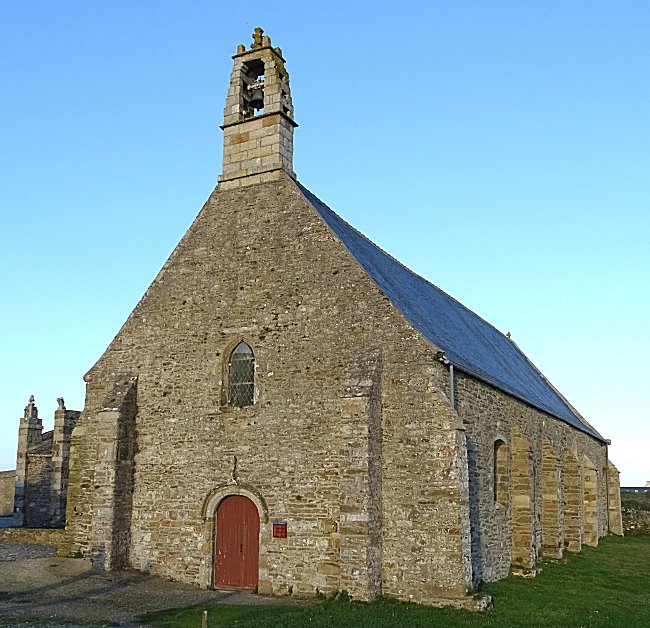 Access : This chapel is located at St-Mathieu headland, halfway between Plougonvelin and Le Conquet. It can be seen from the road, at the end of a stone footpath.
Park in the parking lot next to St-Mathieu Abbey. 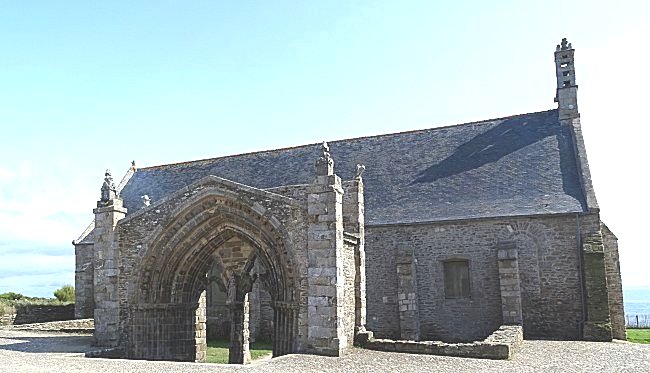 It is the old church of the hamlet of St-Mathieu that was formed near the abbey and was much more extensive in the Middle Ages than today. The present building is limited to the nave, rebuilt in 1861, and its entrance has been completely converted. 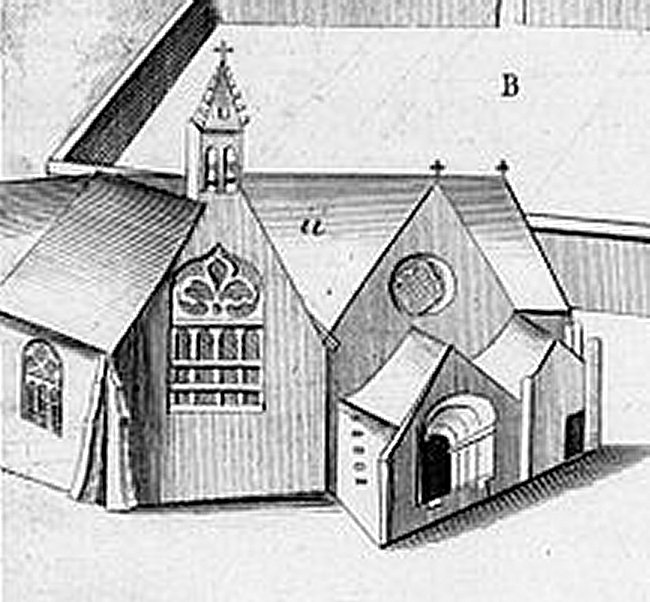 The church in the XVIIth century.

The drawing above is taken from a plate from Monasticon Gallicanum representing the abbey of Saint-Mathieu. The church appears outside the abbey's enclosure. We can see that the current nave was preceded by several buildings to which a porch gave access. Only this pretty arched porch dating from the XIVth century remains today among these buildings. The bell tower was rebuilt at the top of the west gable. 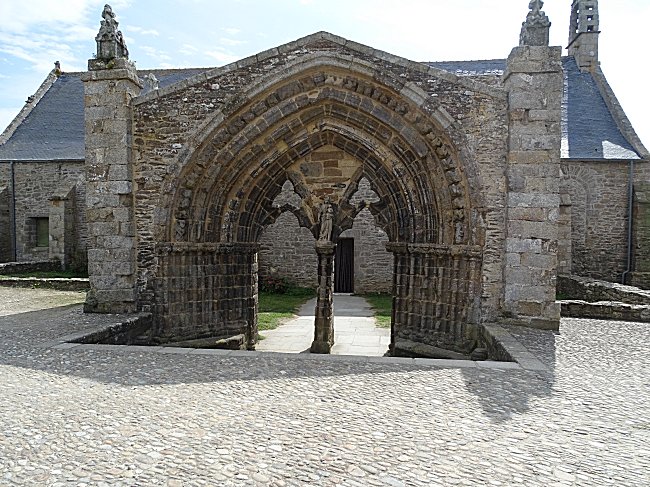 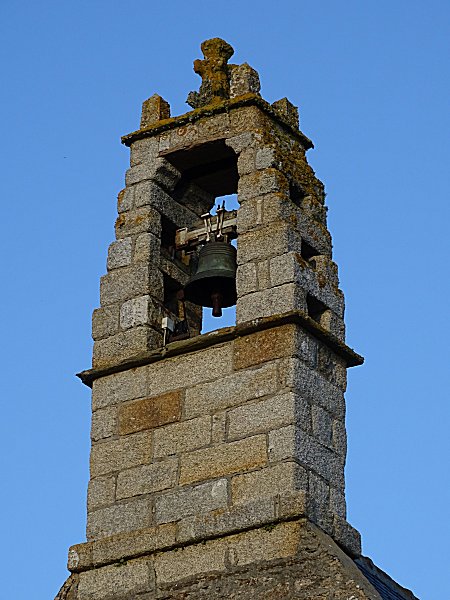 It is necessary to descend some steps bordered of the base of old small columns to pass under this beautiful porch to the openwork tympanum of trilobes keeped by a crowned Blessed Virgin very eroded by the bad weather. 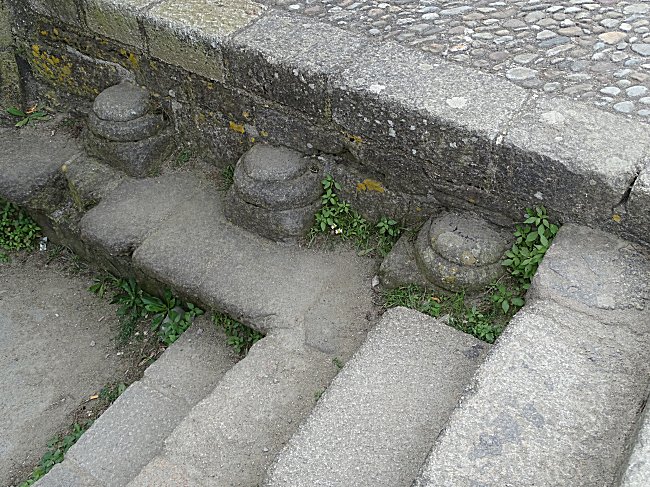 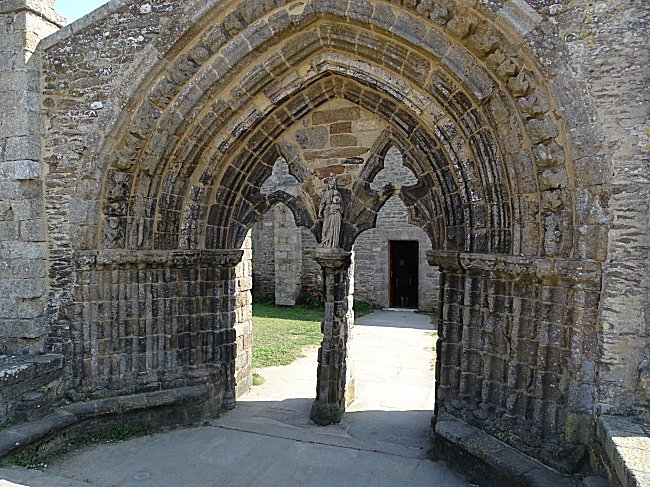 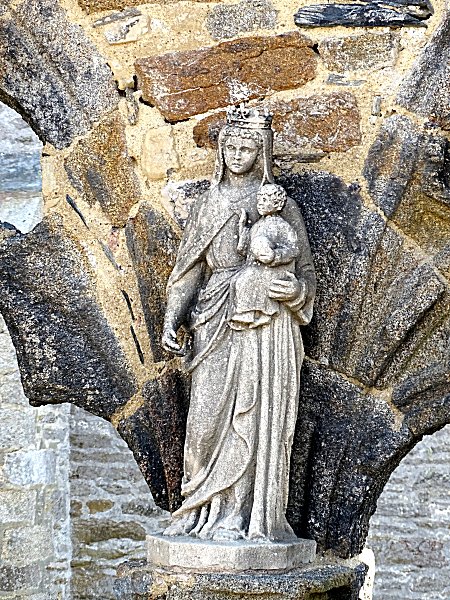 One will notice that the foliage decorations of the arches leave place at their base to two small carved characters still more eroded who could perhaps represent the donors of the porch.

The nave is very sober. It gains height because its structure is not hidden by a vault. 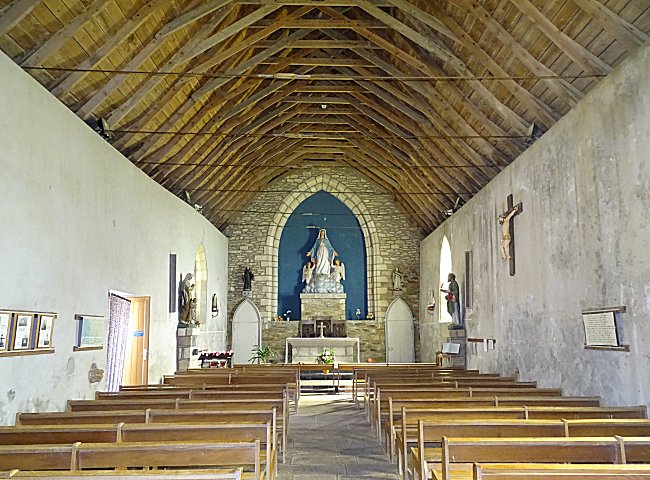 It is dominated by an imposing Virgin of the Assumption supported by two angels, which dates from 1864. We still see around her the Gothic arch of the master-window that illuminated the old church. 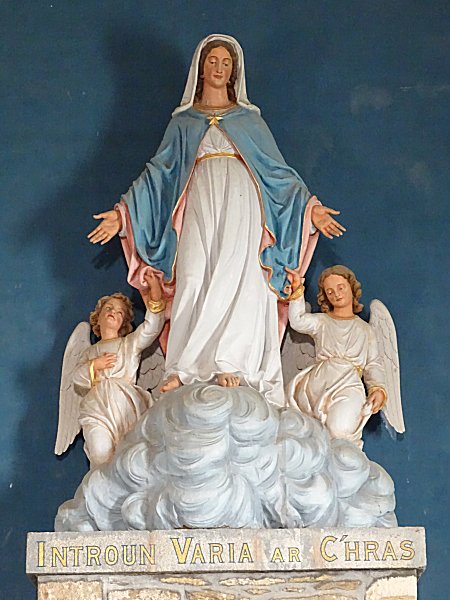 Several polychrome statues of the XVIIth century adorn the walls. Saint Anne educating the mother of Christ thrones on the north wall.

Saint Anne and her Daughter

She faces Saint Matthew showing a feather and carrying the gospel attributed to him1.

Two smaller statues frame Notre Dame de Grâce. On the left, Saint Tanguy, dressed as a monk, is according to legend the founder of St-Mathieu abbey3. 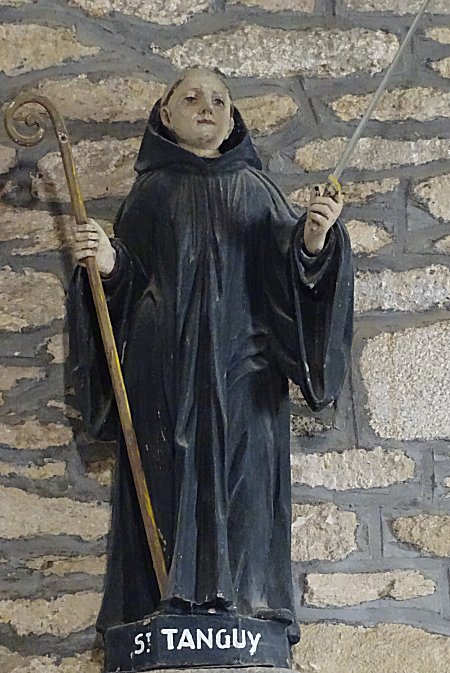 On the right, his sister Sainte Haude. She is depicted here with her maid apron, denouncing her mother-in-law who instigated her brother the crime of which she was a victim. 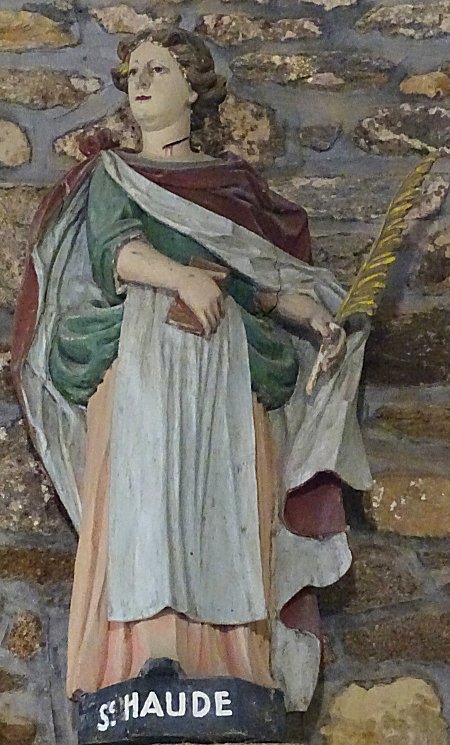 Sainte Haude wears on her neck the trace of her decapitation

As in other religious buildings of Iroise country one can see on a wall the model of a fishing boat deposited there as ex-voto. 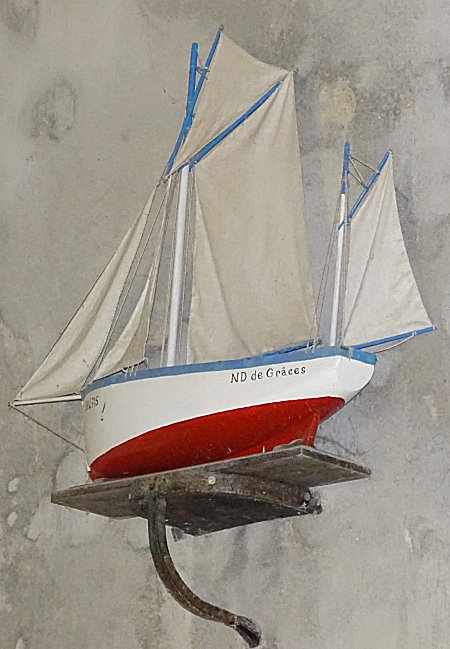 Behind the altar is the most interesting element of the heritage of this chapel. It is a bench of work4 with three seats of unequal heights, dating from the XVIIth century, superbly carved and probably coming from the nearby abbey. 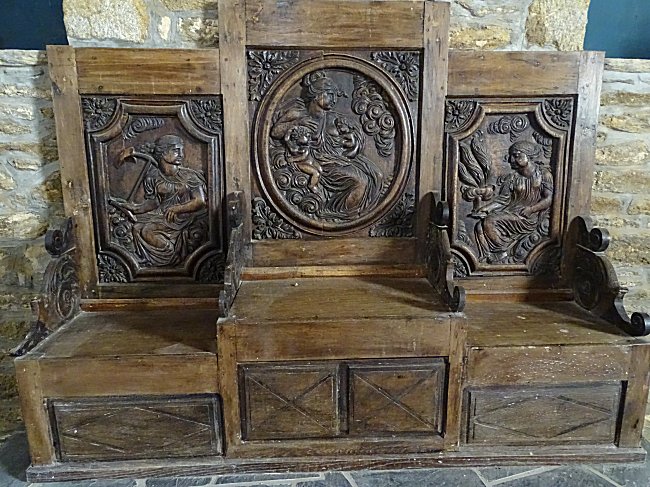 Located near the main entrance, the baptismal font consists of a simple octogonal granite basin. 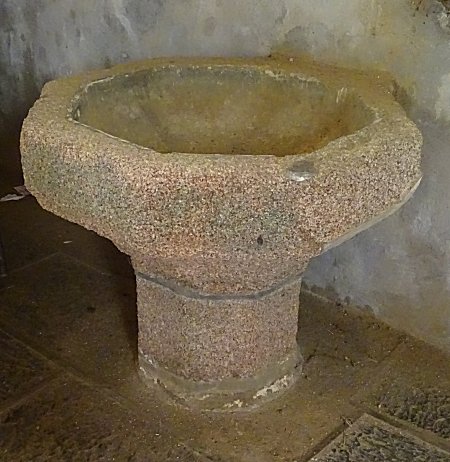 
Let's circle around the chapel. On the north wall, which borders the old levelled off buildings, one can clearly see the location of the Gothic windows that were walled up. 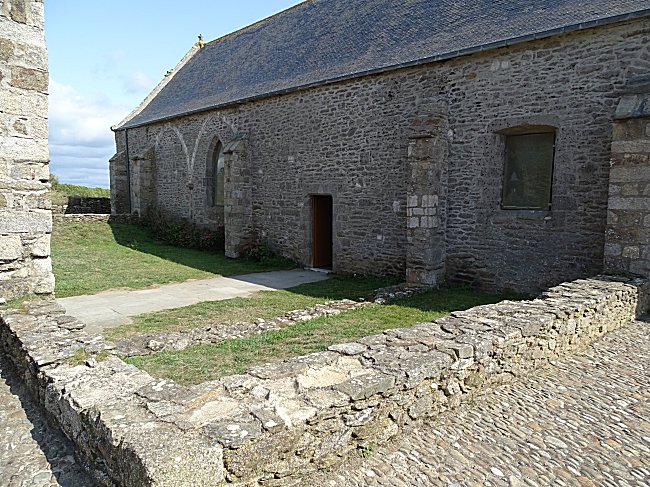 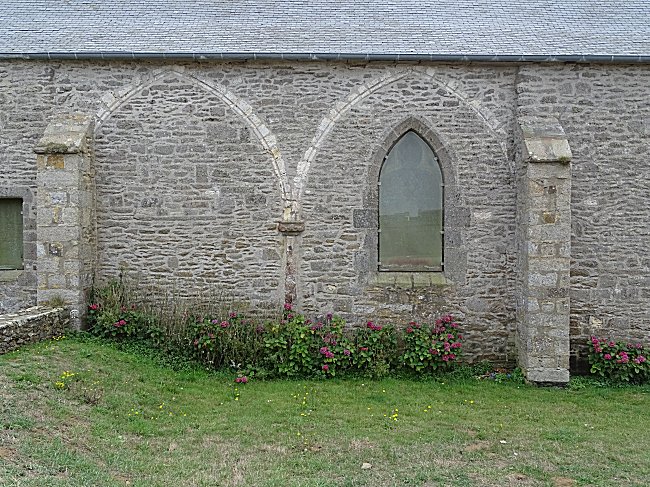 It is the same on the east gable. It can be seen that the old gable and the Gothic arch of the previous church have been preserved intact. 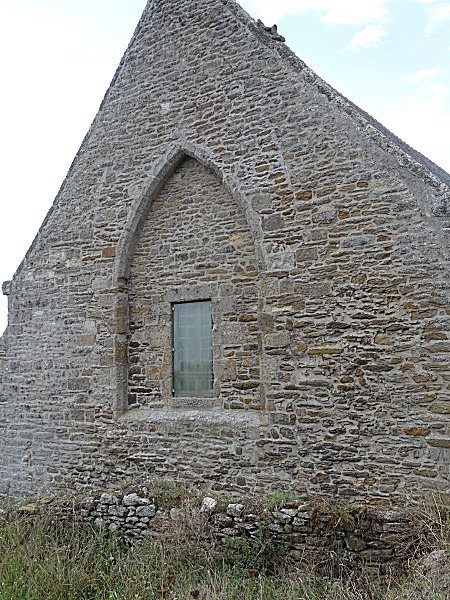 Remains of the previous church

Of course, as was customary, a cemetery extended formely around the old church. Underneath the levelled northern part of the building, tombs were uncovered a few years ago. And under the vast lawn to the west, many tombs still remain. The old bent cross and the Calvary are still its guardians. 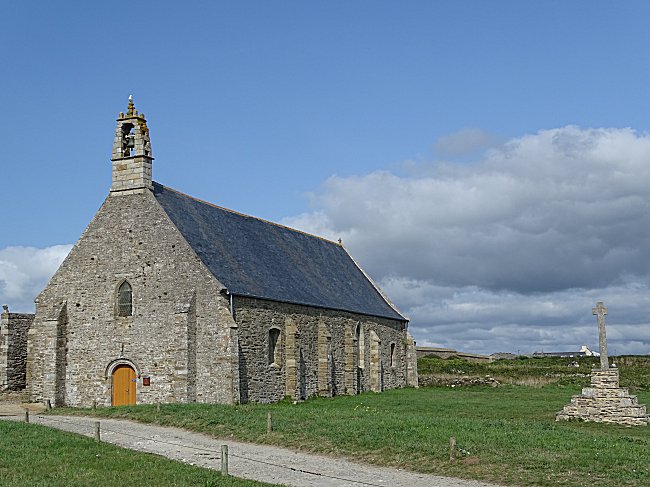 The attribution of the name of St-Mathieu to the nearby abbey and to the whole site comes from a legend dating back at least to the XIth century claiming that the apostle's remains were brought back from Ethiopia to Brittany 600 years earlier by Breton sailors. See below the brochure "La Translation des reliques de Saint Mathieu" edited by the Friends of Saint Mathieu and available at the Abbey Museum.

-2- Vazé, Mazé or Mahé, Matthieu, Mathieu, so many different spellings to designate the same character, there is enough to understand nothing !
To simplify, let us say that in French we write Matthew with 2 t when it is the person of the apostle, and only one t in the other cases. In Breton, we don't have this problem because we deleted the t's. Matthew is Mazé or Mahé depending on the region. Thus Loc-Mazé Traoun, the name of the small town around the abbey, means the western place dedicated to Mazé. However in Breton, Celtic language, there is in certain cases mutation of the initial consonant. For example Mor, the sea, can change to Vor. And Sant Mazé becomes Sant Vazé.
Finally to finish what is already complicated, know that there has been a true Saint Vaz, native of India and recently canonized by Pope Francis on the island of Ceylon !

4- A bench of work is a church furniture formerly reserved for the marguilliers, the persons in charge of the Council of Fabrique who administered the goods of the parish.

The theological virtues, that is to say, those intended to guide Christians throughout their lives in their relationship to the world and to God, are Faith, Hope and Charity. 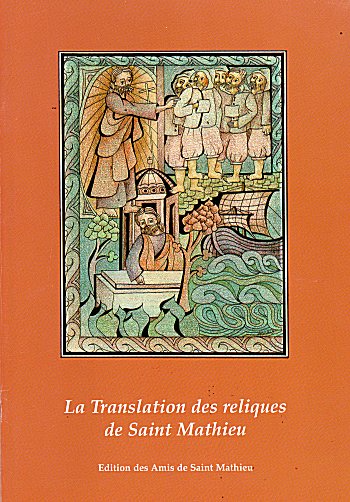 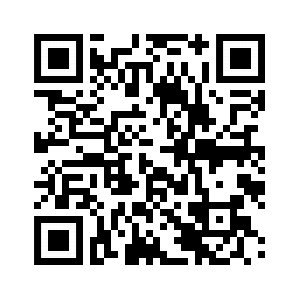