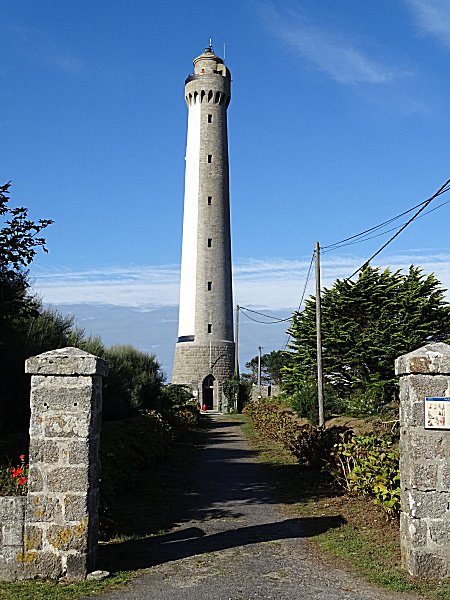 Access :   The Trézien lighthouse is located inland, 500 m from the shore. It can be accessed from the D28 at the Plouarzel exit towards Le Conquet: at the roundabout take the direction of Trézien and continue on this road. Then, 2.5 km after the wind turbines, turn right at the "Phare de Trézien" sign. Park 200 m further on, on the left, in the car park located just after the lighthouse alley.

An exhibition in the attendant's house

At the foot of the lighthouse1, the guard house welcomes the visitor by first presenting him with a series of 15 explanatory panels on the seamarking of the Four Channel. These panels, jointly developed by the Iroise Marine Natural Park, the Lighthouses and Beacons and the municipality of Plouarzel, are completed by display cases showing the different lighting systems that have successively been used in Trézien.
The Four Channel is the navigable part of the Iroise Sea located between the coast and the island of Beniguet. It extends to the English Channel and presents many dangers : a powerful current that reverses with the tide, hundreds of reefs often responsible of wrecks, not to mention a sometimes very violent wind that the sailing ships has always feared in particular. The Molène archipelago is not parallel to the coast, so another channel, the one of La Helle, is heading there. Since ancient times, ships have always followed the Four Channel to the English Channel and the North Sea. Compared to the seaway off the archipelago, this route saved them valuable time. Hence the need to secure it. 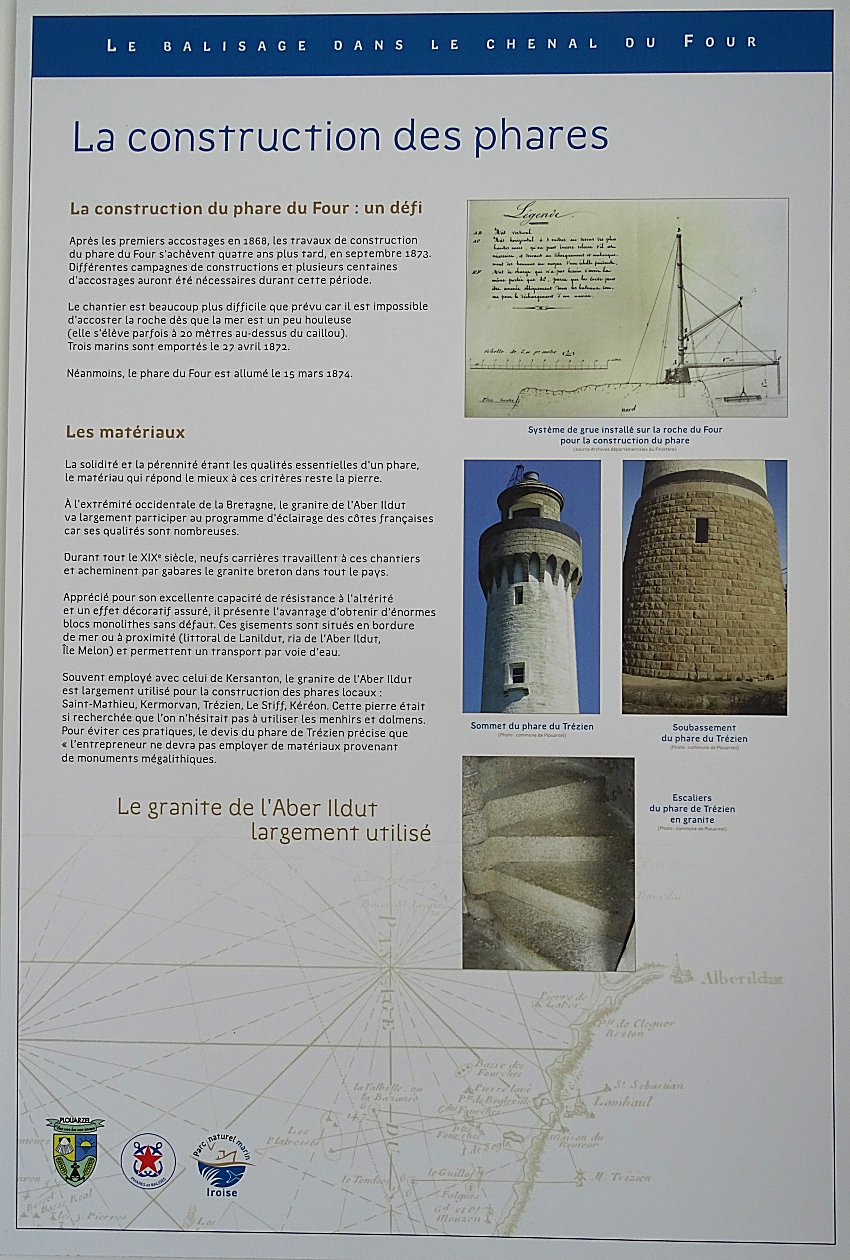 It was after the grounding of a French Navy torpedo ship that the State decided to build a lighthouse at this site. The building was inaugurated in 1894. With a height of 37.20 m and a range of 23 miles (40 km), the Trézien lighthouse allows sailors to align themselves with the Kermorvan lighthouse from the tip of Pen Hir in order to follow with certainty the first part of the seaway without any reefs in the Four Channel. Off Trézien, they had to change their alignment. 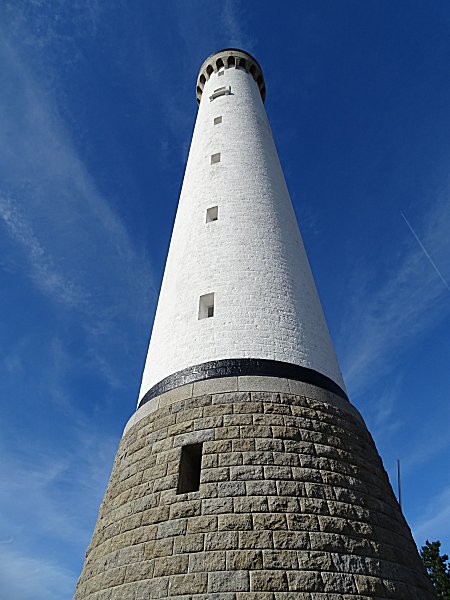 A staircase of 182 stone steps leads to its top. This is an opportunity to recognize the two varieties of granite common in the region : The porphyroid granite with large crystals white feldspar of Plouarzel and especially that with large crystals of pink feldspar that quarrymen call "Laber granite" ( Aber Ildut granite). These superb stones also have many inclusions of black mica (biotite) 2. 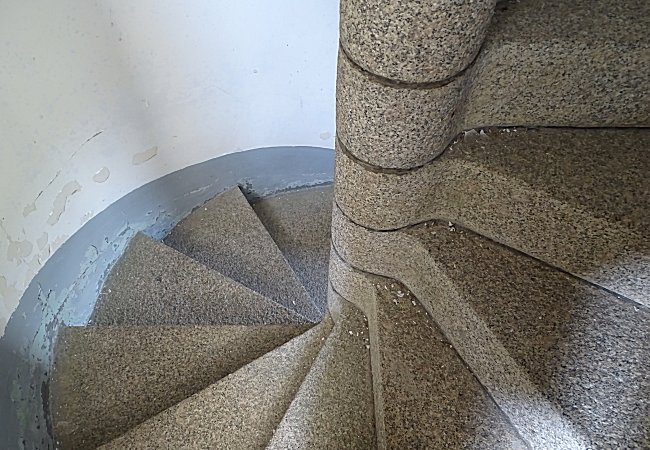 The steps are supported by a thick brick wall that occupies the space between the exterior moëllons and the staircase. This space narrows to the top in order to give the tower its truncated cone shape.
Small windows illuminate the stairs. They allow the visitor to take a few breaks during the ascent. 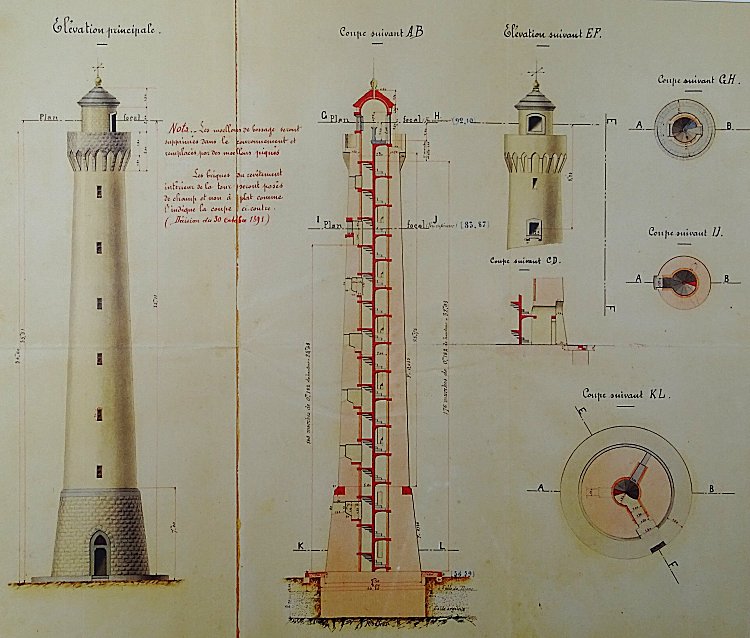 A projecting gallery was built at the top. From this balcony you can enjoy a magnificent 360° panorama and a breathtaking view of the foot of the monument. 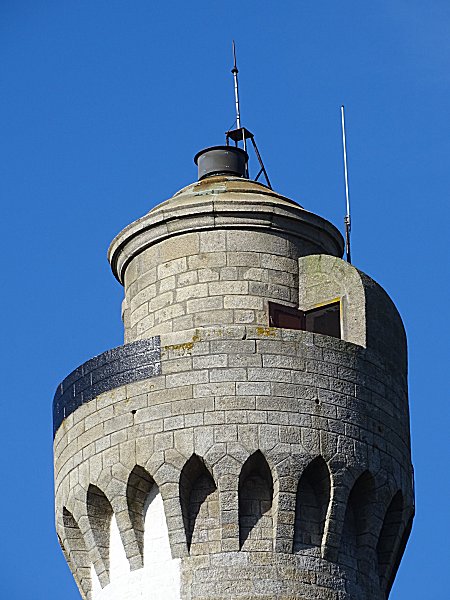 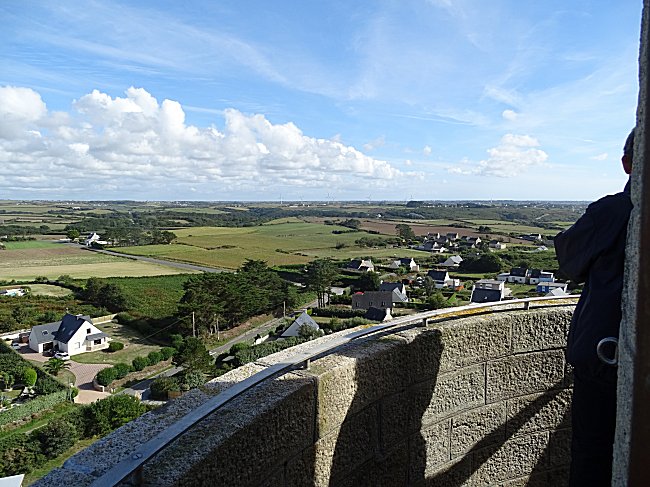 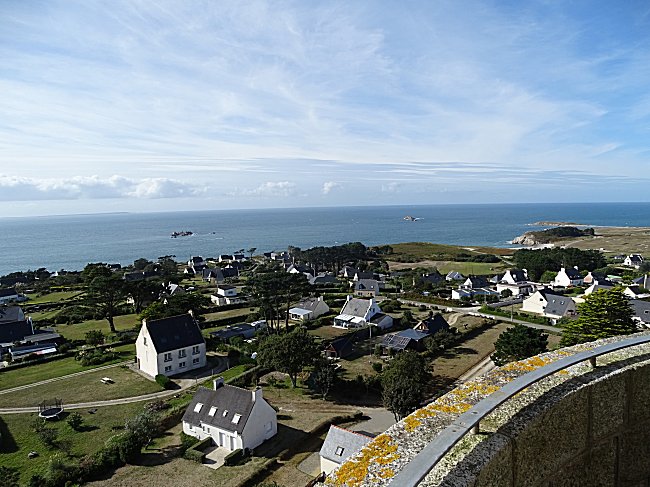 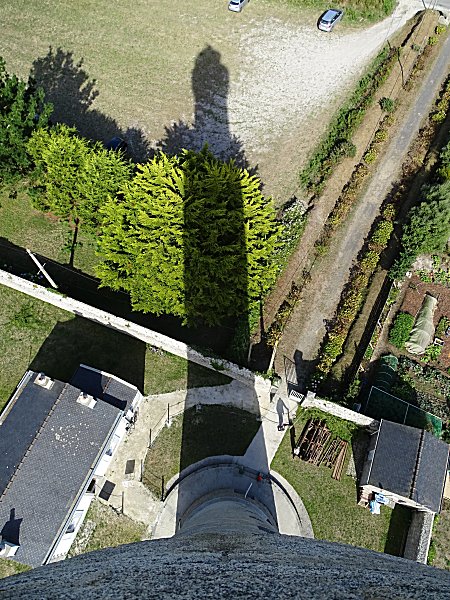 From up there, the attendant of the lighthouse were therefore monitoring the navigation. Not only that, since it is said that sometimes they helped farmers to find their lost animals, but also the rector of the parish, who knew which among his ewes, probably lost too, were still working in the fields on Sundays instead of going to mass…3
During the Occupation, a shell fired by the Germans from the Keringar battery, in Plougonvelin, destroyed part of the lighthouse. 35 steps had to be replaced by a wooden ladder, but the service was not interrupted.

The visitor is always surprised by the small size of the lighting system. Whereas in the past a huge oil vapour lamp was used, which took up a lot of space until electrification in 1963, a small halogen bulb is now sufficient.
In front of it, a Fresnel optic is placed, concentrating the light towards the horizon.
Automated in 1986, the headlight produces a white ray per second : 2 are short, the third is long. 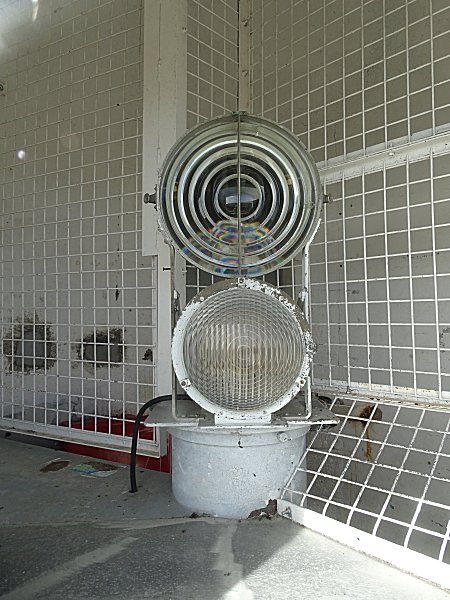 The return to ground level does not present any particular difficulty. However, we will remember the children, always ready to anticipate the adults at the risk of missing a step... and maybe many others out of the 182 on the stairs.
We will come back to see this friendly lighthouse with family or friends. It is sometimes used to organize activities full of thrills, such as races or rock climbing along the outer wall.

And if, from the top of the gallery, you see a tractor working in a field one Sunday morning, turn your eyes wisely towards the sea: the view is so beautiful...

-1- The difference between a "lighthouse" and a "light" is explained on our page dedicated to Lochrist's light at the Conquet.
The Lochrist light

-3- In Brittany, the priest is also called rector. 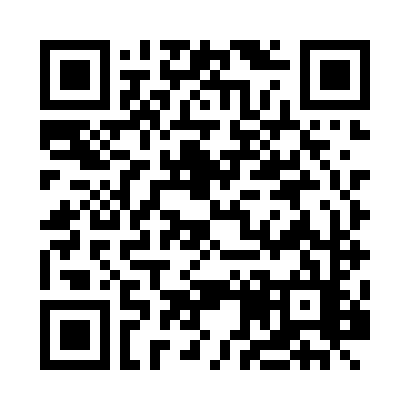