The davits of the coast

This page invites you to discover forgotten installations, which will take you from Ploumoguer to Plougonvelin, twenty kilometres away. You will therefore need to take a vehicle.

During walks on the coastal path, one sometimes sees kinds of walls bordering the tops of cliffs. The walker thinks they were made to prevent them from collapsing. That's right, but only in part because the real reason for this laborious layout is to stabilize the platform of a 'davied' and thus to secure it. 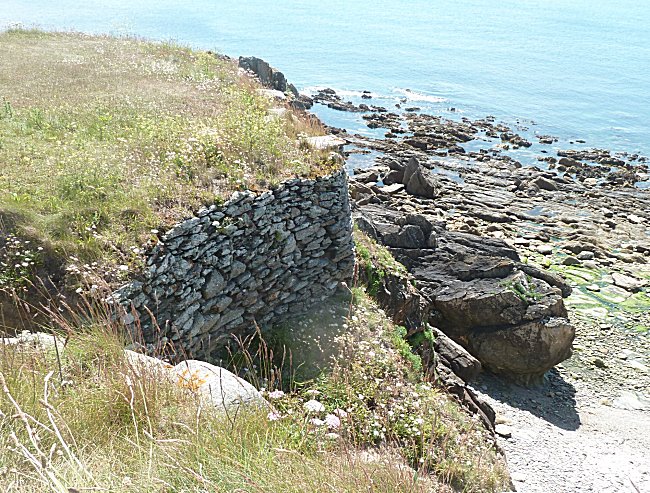 The term 'davied' is a Breton word, which is also written davier in French, and refers to the arrangement of the cliff, the horizontal platform and the apparatus intended to hoist a load coming from the shore. The davits are not very common, but one still meets some in the Iroise country, mainly above the little accessible strikes as in Porstheven, in the municipality of Ploumoguer, or on the coast of Plougonvelin.

Access :   From Ploumoguer, follow the D28 towards Le Conquet. After 300m, turn right towards Illien beach. At the end of the road, turn right again then take the first small road on the left near a calvary. We arrive at the hamlet of Brenterc'h. Turn left and follow the asphalt road. Park under the trees at the end of the tarred area.
Continue on foot this wide path which becomes rocky, and which goes down then goes up, on approximately 600 m. At the top of the hill, turn left onto the GR-34 coastal road. Then you can see immediately the enamelled nameplate of the Porstheven site. 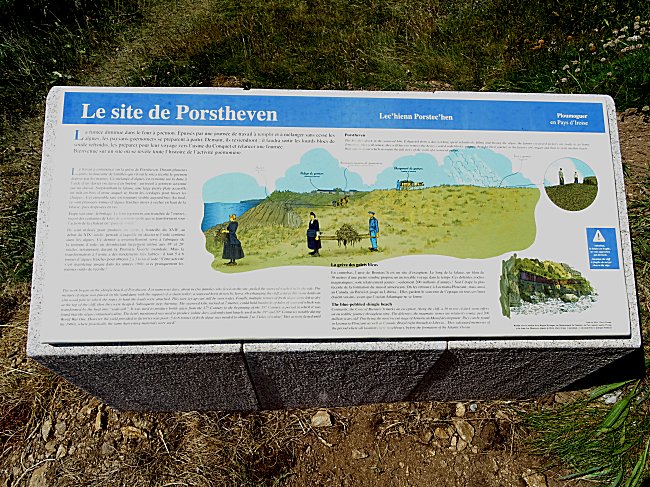 This enamelled plaque shows how the seaweed, intended mainly for fattening crops in fields and gardens, was brought up in the past. It was therefore the wreck seaweed, the one that the sea tore off and deposited on the shore.
Behind the fence you can see the remains of a wooden beam protruding from the cliff. In the foreground, a cemented platform keeps it in the ground. 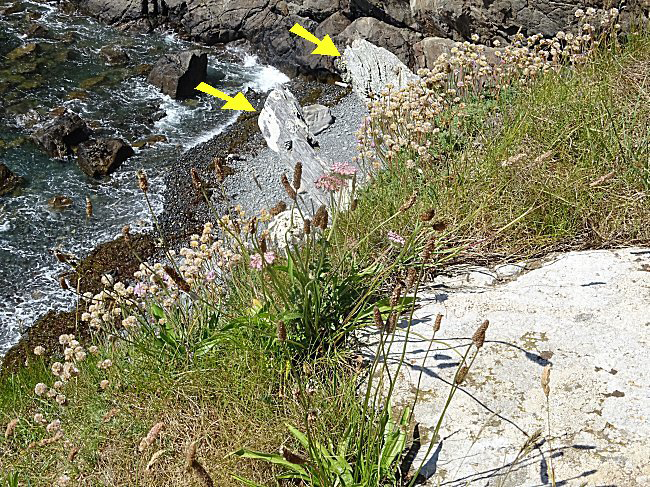 The remains of a wooden beam (the two grey edges in the photo) overhang the void.

This beam was used as support for an arm equipped with a pulley which made it possible by means of a rope to mount the collected seaweed at the top of the cliff.
Traction was provided by a horse. The arm and its load were tilted towards oneself and the seaweed was then transported on a bladder (large stretcher) or in a dumper. 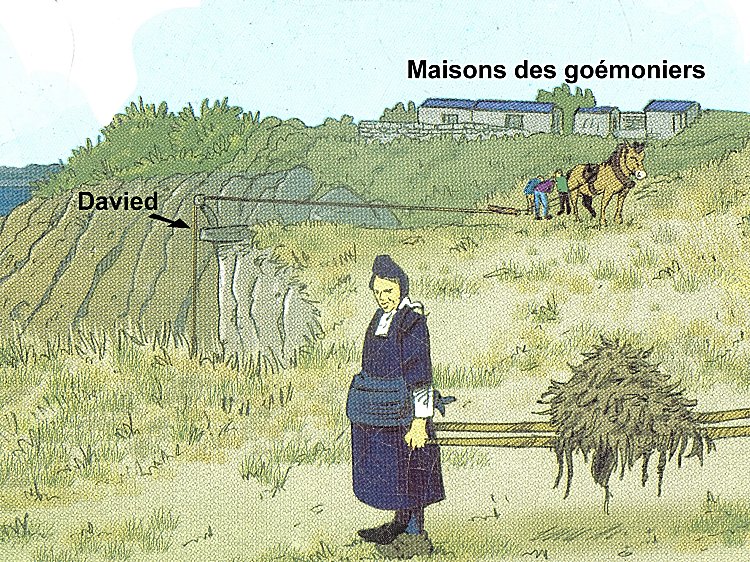 Geology lovers will not miss, if the sea is low, to go down the path up to the chicane in order to contemplate from the strike the cliff of Brenterc'h which constitutes a place where one discovers how the Atlantic Ocean was formed ( visit of the Brentec'h cliff ).

We must now go to the town of Plougonvelin where the davits still visible are many and interesting to discover.

Access :   From Pointe St-Mathieu, take the direction of Plougonvelin and turn right towards Les Rospects. Park at the end of the road. Two paths start parallel. Follow on foot the one on the right which joins the coastal path GR-34. Turn right towards the blockhouse. On the cliff you can see very well the sites of the old davits. Caution, do not get too close to the edge, danger of landslide. 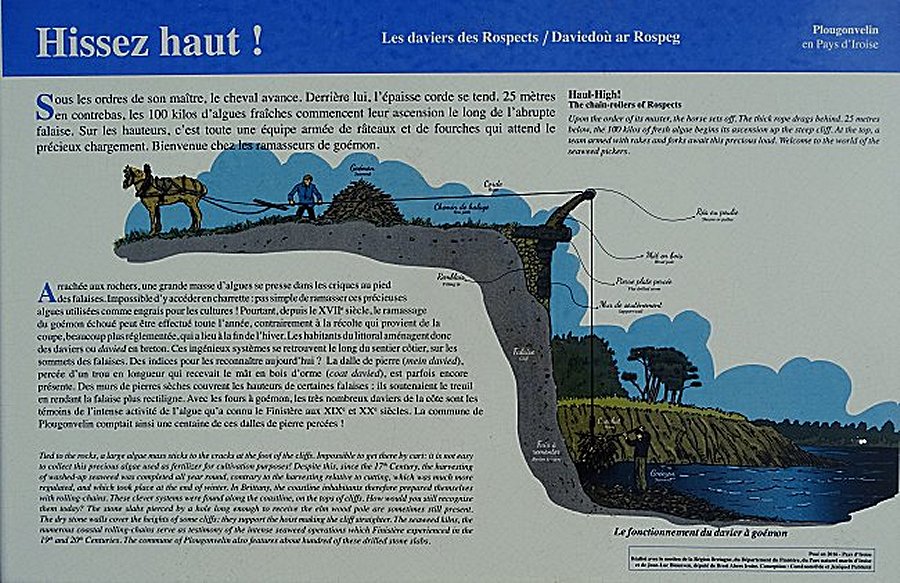 Between Pointe St-Mathieu and Plougonvelin, at Les Rospects, the remains of several davits can be seen. The platform supporting the arm and its pulley was a flat stone on which one notices a notch. 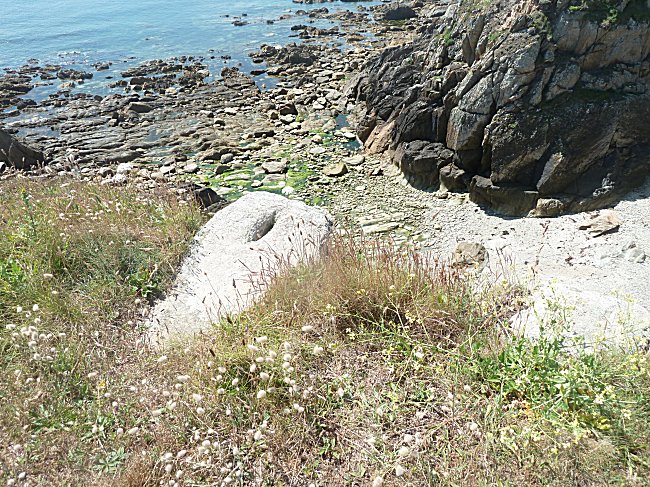 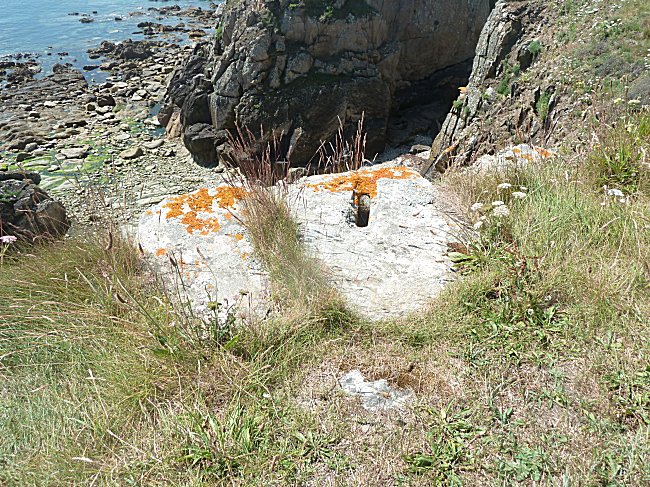 Further east, one kilometre along the same coast, another site has several davits locations.

Access :   Return to the main road towards Plougonvelin and take the second small road on the right, signposted "Vaéré". At the fork, turn right and continue to the sea. In front a very short trail leads to the coastal path. To the left, a large grassy area can be seen at the edge of the cliff. We discover the davits all around. 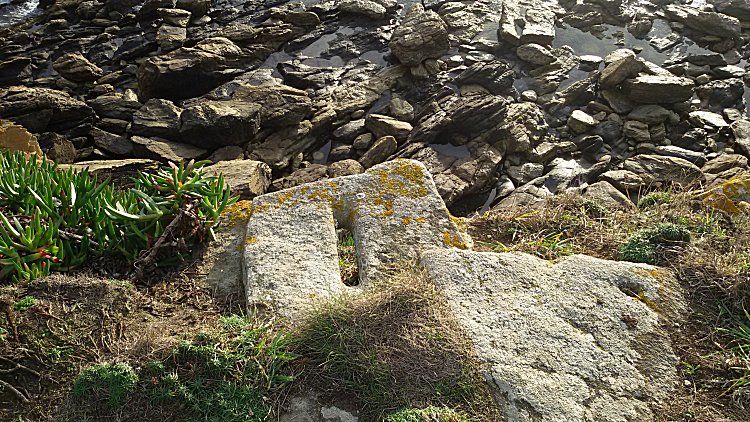 In fact there are not only three and we will have fun discovering them all. But be careful not to get too close to the edge of the cliff (risk of landslide). We can understand that this location was chosen for the verticality of the cliff, the ease of access by sea, and because it offers sufficient space to move a horse harnessed to a dumper.

On the way back, taking the small road, a sign of prohibited direction obliges to take a dirt road on the left. It is interesting to park just there to observe, above the creek, an installation installed by Mr. Gabriel Quellec, creator of the Vaéré Garden located on the other side of the road ( garden visit ). 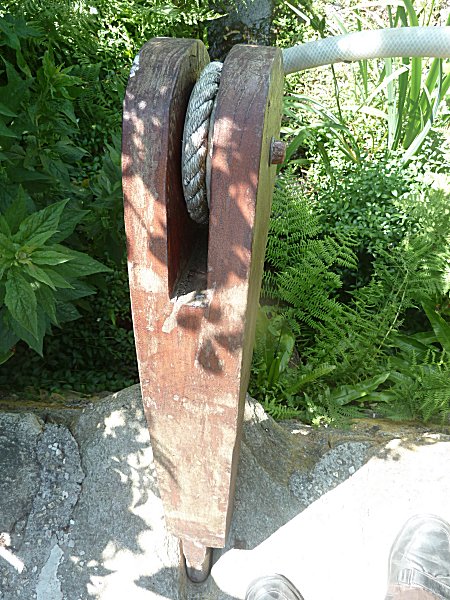 The algae brought up by this system were thus traditionally spread as fertilizer in gardens or in fields after ploughing. The seaweed activity was mainly peasant and seasonal. It lasted until the 1960s.

But in the first half of the XIXth century, an industrial method was invented to obtain various chemical products from laminaria, including soda. The seaweed activity then diversified. Professionals gathered the laminaria by sail, put them in millstones and spread them out on the ground to dry them in the wind and sun.
They then transported them to a seaweed kiln in the moor where they were burned ( visit of the seaweed kilns ). The paste obtained hardened and was sold to the different iodine factories in the Iroise country.

These seaweed sailors often lived close to their place of activity. Thus on the islands of the Molène archipelago many of them settled for a large part of the year in temporary constructions where they lived miserably.
In Porstheven, these were located very close to the cliff. 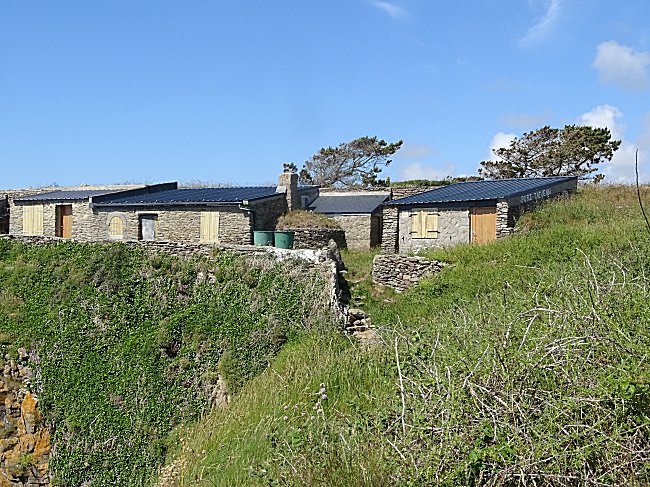 Restored, become small holiday homes with breathtaking sea views, the old houses of the seaweed workers are still there in Porstheven to recall that some very poor populations of the Iroise country had formerly only the seaweed activity 1 to survive.


-1- The seaweed activity is far from having disappeared, but it has evolved a lot with technical progress. To be convinced, it is necessary to visit the port of Lanildut and its 'Maison de l'Algue' ( visit of the Maison de l'Algue ). Lanildut is the leading seaweed port in Europe. A whole fleet of specialized vessels land the algae taken offshore. These are then sent to factories where alginates used as gelling agents, stabilizers, thickeners or emulsifiers for the food industry are now manufactured.

Read on the website " Aux Marins " the page written by Rémy Le Martret concerning the davits of St-Mathieu.

Also read on his blog the page written by Jean-Pierre Clochon about the davits of Le Conquet.

Other pictures of davits are available on the internet.